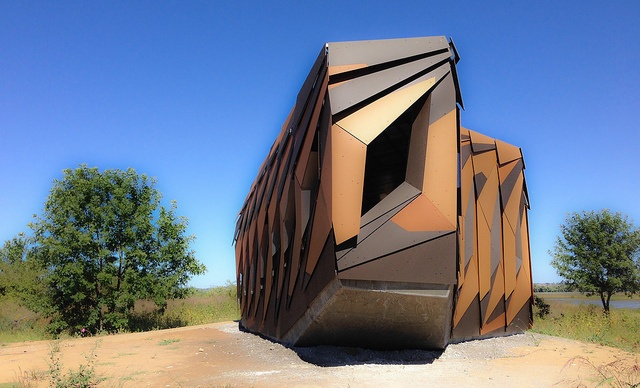 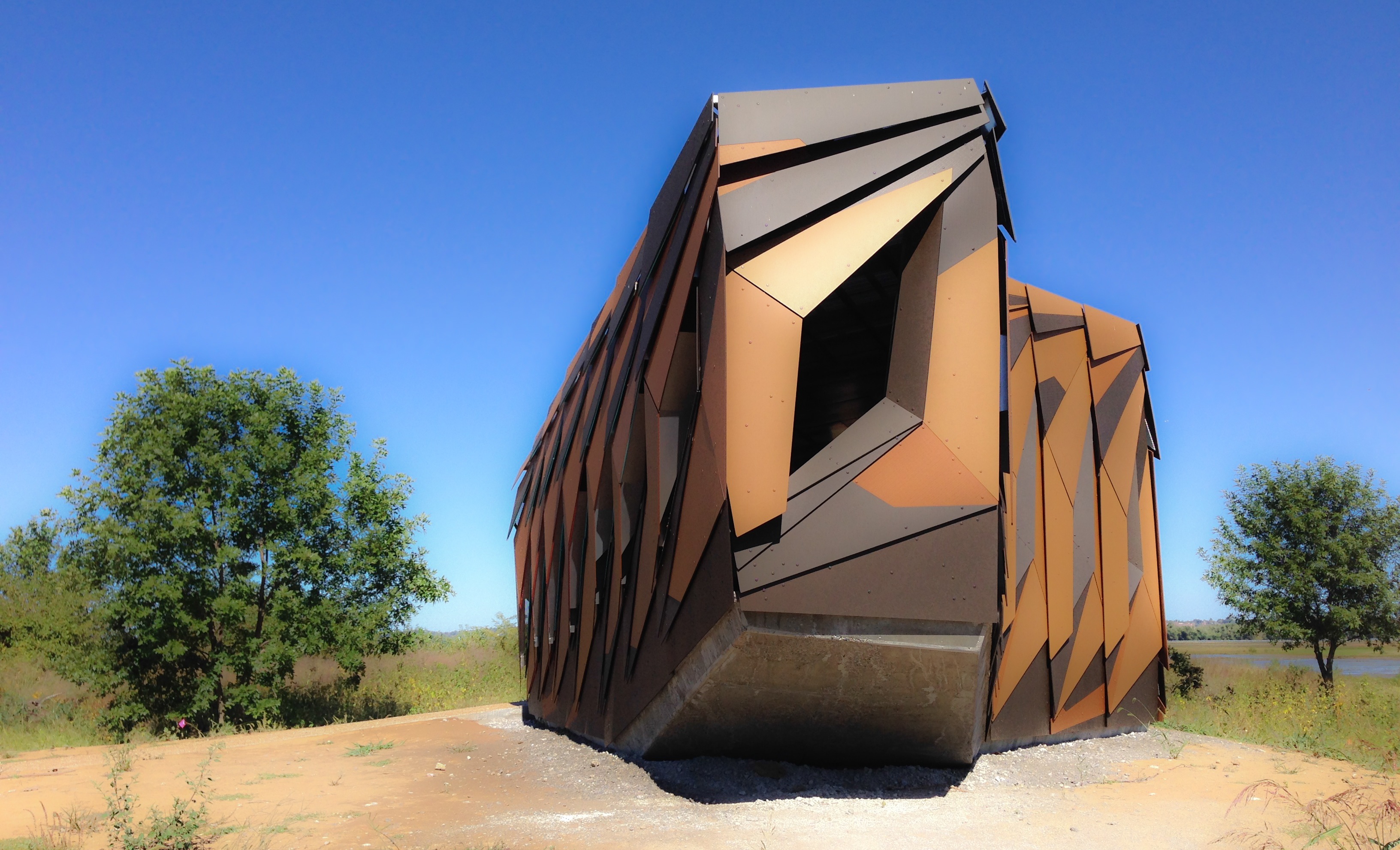 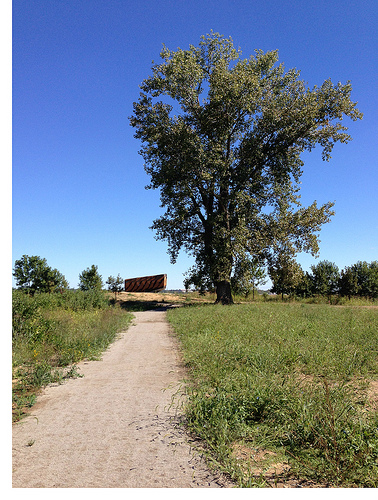 This is an article about a bird blind, but it’s going to take a little bit to get to that… I spent this past Saturday taking in City Museum, a place that’s easy to brag about—I’ve pretty much settled on “incomparable” to describe the creation, and legacy, of Bob Cassilly. More than once, while scuttling through an airplane fuselage or inching headfirst through a hole leading to who-knows-where, I thought, “This is St. Louis, this place defines what’s great about this city.” We don’t have mountains, we don’t have the ocean, what we have is our built environment, our historical city—to paraphrase an oft-heard line from some who love St. Louis.

I’ve parroted the line myself, but I’m not sure I believe it. I mean, growing up in northern Indiana, I never felt at a loss for geography. I’d traveled and seen the ocean and mountains, stood in awe—they’re beautiful—but they always seemed like barriers to me, places where you had to stop. In my part of the world, I could go in any direction, at each mile I could chose to go left, right, or straight. I could see and be part of the world around me. And small geographic changes seemed big—that hill down to the river? Well, it’s not much higher than a parking garage ramp. Nonetheless, for anyone willing to explore, there was no shortage of things to see. To me it was far from boring.

Between the coasts and away from the mountains, some cities can struggle to define themselves geographically. Which city is on the White River? The Scioto? Does Lincoln even have a river? St. Louis sits at the confluence of the greatest river system on the North American continent. Only a very small handful of cities in the world can claim a similar geographic distinction.

Born on the river, because of the river, the City of St. Louis has unfortunately largely turned its back on the Mississippi. While known to everyone, the confluence of the Missouri and Mississippi Rivers is exponentially less identified with the area than a certain upside-down weighted catenary nearing its 50th birthday. Of course our river has always been a working river, not a scenic waterway. Today, industry continues to line the shore, the area being the nation’s largest inland port other than Houston.

It’s because of this that even the more naturalistic riverine landscapes are too often interrupted by high-voltage power lines, highways and industrial sites. Riverlands is no exception. And yet the water systems, the places migratory birds require, have been restored and are being expanded after decades of degradation (water levels in some areas can now be controlled to give migratory shore birds large mud flats on which to stop).

This is where I found myself with my family the day after City Museum. We stopped at the Audubon Center and were greeted by Patty Hagen, the center’s executive director. There, she graciously helped my daughter (5) and son (3) peer through a scope to see pelicans and cormorants in Ellis Bay. We made a plan to explore a couple hiking trails and noticed a small architectural model perched atop a case displaying a Trumpeter Swan.

The model was the product of “Studio Confluence”, a course led by visiting professors Ken Tracy and Andrew Colopy at the Washington University in St. Louis School of Architecture. Its challenge was to use digital fabrication to design and build an avian observatory in collaboration with The Audubon Center and the U.S. Army Corps of Engineers. The model I held was from a 3D printer, that rough white plastic that gives a form, but little detail, leaving a lot to the imagination.

We set out for the blind and found something a little unexpected—quite likely the most contemporary, coolest aviary observatory anywhere. Dedicated August 28, the structure still has its new bird blind sheen. The landscape surrounding it is still bare dirt, yet to re-grow and blend back into its surroundings. The structure itself is destined to both stand out and blend in. 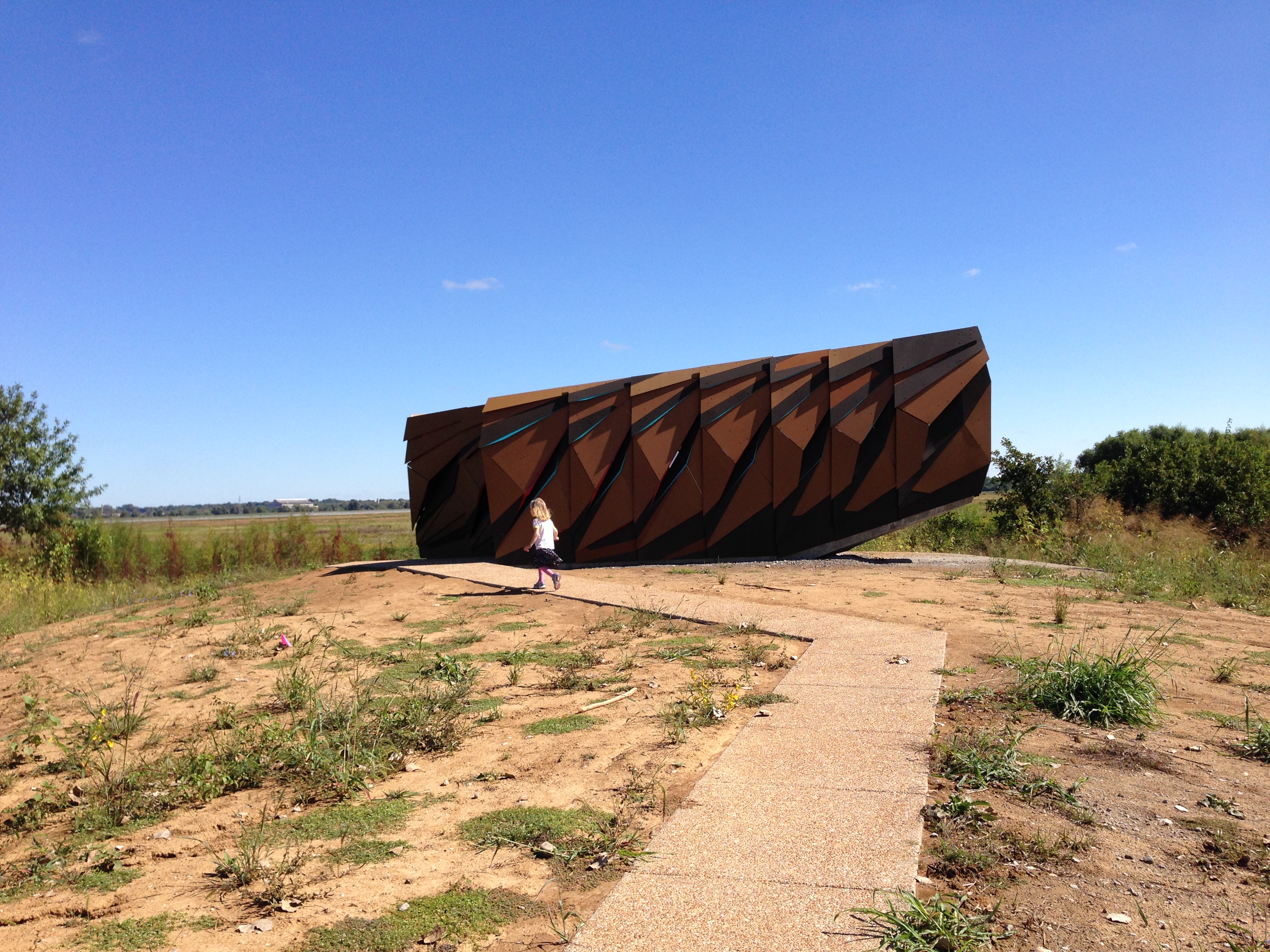 {the blind itself is interesting to explore, outside and in}

“We want to offer beautiful design wherever we can,” said Hagen, when reached for comment after our visit. “(The idea to have great design) grows from the design of the Audubon Center, taking inspiration from the landscape. The opportunity to partner with Washington University on the design of this innovative structure was wonderful.”

Hagen shared that the blind is the result of significant research and collaboration with birders, the Riverlands and the Army Corps of Engineers. The shingled layers work as camouflage, hiding human visitors while presenting varied, ever-changing shadows as light moves across the structure over the course of a day. One end of the blind rises several feet, providing just enough elevation for birders to see across Heron Pond. The cutouts sit at varied heights for visitors and their scopes and camera equipment.

So it took a small, thoughtful bird blind to make me appreciate the incredible natural environment right in front of me. Perhaps that’s a statement to the power of architecture? The structure won’t bring more birds to Riverlands, but it will bring people. I’ll return. The bird blind introduces an interesting, unique human scale marker to an incredible natural place.

Speaking with Colopy, he succinctly defines my attraction to the project. “It’s important to put as much effort into everything we make–in that setting you feel like your intention, what you’re contributing to the environment is even more important.” And that’s the point at which Riverlands becomes something greater for visitors. The thought, effort and end product, the value, of what is built there should parallel the value of the environment. “It’s not successful unless it enhances the experience of being there,” Colopy says. “People go there to see something that is very transitory and very fleeting, so having something more permanent to see and experience is important.” Well said.

Go for the birds, go for the architecture and go to realize that St. Louis is located at one of the greatest geologic epicenters of life in the world. Filmmaker Ken Burns once told a St. Louis crowd that it is impossible to tell America’s story without visiting St. Louis: The Civil War, baseball, jazz, Prohibition. To that should be added the environment and animal migration. We may not have mountains, or an ocean, but we do have our built environment and our epicenter at the confluence of the largest river system in North America.

Riverlands incorporates 3,700 acres of protected prairie marsh and forest along the Mississippi Migratory Flyway, a critical juncture of the migratory ecosystem stretching from Patagonia to the Arctic. Visited by more than 325 species of songbirds and waterfowl, the area attracts visitors from around the world. The area represents an important habitat for trumpeter swans, great blue herons, bald eagles, gulls, geese, pelicans and other wildlife. In addition to bald eagles wintering at the site, Riverlands is known for the approximately 500 Trumpeter Swans wintering in the area. Early last century, there were only 70 known trumpeter swans worldwide.

More about the Audubon Center designed by Trivers Associates in St. Louis.