{rendering of parking garage between Plaza Square buildings 20 and 30}

If a downtown developer gets his wish, another parking garage may soon be under construction. Mills Properties is appealing a denial by the National Park Service (NPS) to allow the construction of a five story parking garage between Plaza Square buildings 20 and 30 and retain the buildings on the National Register of Historic Places. That designation is necessary to obtain millions of dollars in historic tax credits to renovate the buildings.

The Plaza Square complex, as a whole was listed on the National Register in 2007. Connecticut-based Urban Developers LLC, filed for bankruptcy late that year. Urban Developers reportedly owed nearly $21M on a $25M loan used to buy Plaza Square out of foreclosure in 2004. The lender, Natixis Real Estate Capital, Inc., then purchased the apartments through foreclosure for $5M in 2009. Nine months after assuming management of Plaza Square for Natixis, Mills Properties bought the complex in May 2010 for $7.5 million. The sale excluded Plaza Square 50, which had been redeveloped as Blu City Spaces condominiums.

As the complex manager, Mills saw a bright future for the nearly 1,000 apartments, but was also aware of the challenges. “We are looking forward to bringing the property back to its original high standards and easy city living atmosphere” Chairman and CEO Bruce Mills is quoted as saying on the company website in 2009. “The last time Plaza Square obtained occupancy above 90% was around 18 years ago when Mills Properties managed the property. We are excited to revitalize this area of St. Louis!”

After taking possession of the property, Mills soon announced plans to sell two of the five buildings. Saying that senior housing would be an ideal fit, there were reportedly multiple interested buyers. Plaza Square 50 would be sold to Capstone Development Group for $3.25M in 2012, and a $20M renovation project broke ground in February this year. Plans are for 149 apartments with a renovation cost of approximately $145K per unit. Following the renovation, Capstone may buy and renovation adjacent Plaza Square 40. This would leave Mills with three remaining buildings.

Mills asserts that a parking garage is necessary to avoid yet another bankruptcy at Plaza Square. NPS has initially ruled that such a garage would lead to de-listing Plaza Square from the National Register of Historic Places. The developer says the choice is between an economically viable development with added parking, and buildings that are destined to fail again and again. The garage would front Pine Street to the north and Chestnut Street and the Gateway Mall to the south.

To be eligible for the state or federal credits, a building must be listed in the National Register of historic Places individually or as a contributing resources. A 20% federal tax credit and 25% state tax credit is available for work on the historic building and complementing elements, but not for furnishings, new construction, parking, sidewalks, etc. There are significant caveats and additional guidelines to the program that can be read here. The National Park Service reviews federal applications and the Missouri State Historic Preservation Office reviews Missouri state applications.

Listed as locally significant under two criteria, Mills is arguing that the district is “primarily” listed due to its importance in community planning and development, and only secondarily for architecture. This, the developer asserts, means that a parking garage between buildings 20 and 30 may alter the architectural make up of the district, but not its historic significance. The National Register Nomination Form does not assign a primary or secondary importance to eligibility criteria.

Ultimately, the developer is making an economic argument, stating that practical economic factors are relevant to the district’s historic nature because they are essential to the district’s existence. The garage is needed, they say, to provide acceptable parking minimums and raise $27M to renovate buildings 10, 30, and 40 and build the garage. 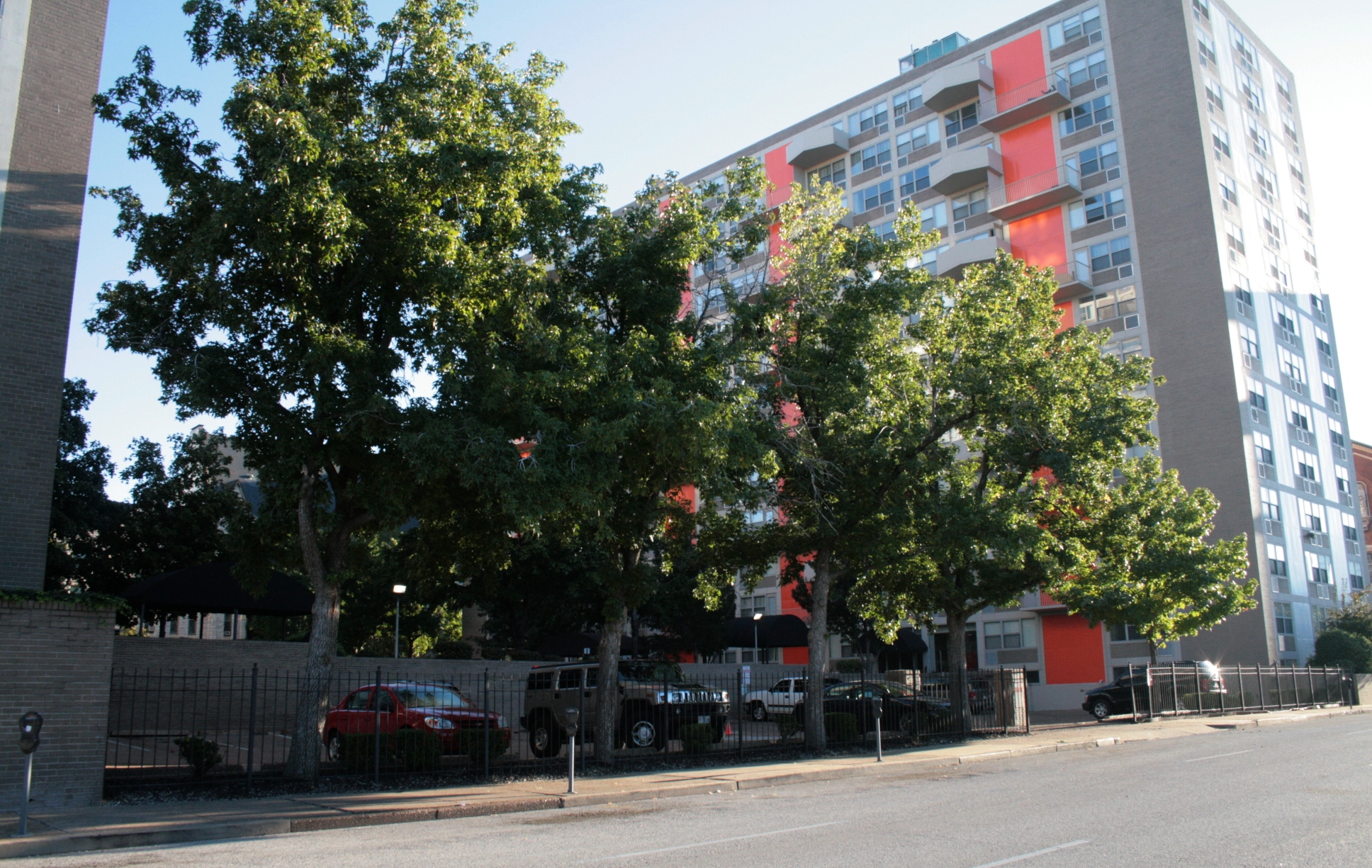 Mills believes the “fatal condition” of Plaza Square is a lack of parking. Once all buildings are renovated, available parking would be 0.29 spaces per unit (764 units and 218 dedicated parking spaces). The developer describes what would result: “Plaza Square will not be able to hold tenants who need cars (there is no grocery store within walking distance). Middle- and upper-income tenants will go elsewhere. Vacancies will increase, cash flows will decline, and maintenance will be deferred. A lower-income demographic of tenants who do not have cars will increase. As middle-income tenants decline, vacancy will rise, physical structures will deteriorate, and another bankruptcy will be almost inevitable.” The survival of the historic district is stake, Mills says. Either a garage is built or demolition of one or more of the Plaza Square buildings will result in order to provide more parking for the others. For what it’s worth, Culinaria, downtown’s full service grocery is 6-7 blocks away.

In making the argument for the garage and retaining the National Register listing, Mills offers a number of contortionist views on Modern architecture, including: An adequate supply of parking is a requirement for the “tower-in-the-park” approach to community planning and housing. There is no absolute ban on above-grade structured parking in Modern Movement architecture. Modern Movement design emphasizes the importance of green space and social space. The roof of the garage will be landscaped with grass, shrubs, bushes and trees and provide more green space and social space than is found on the existing ground level. 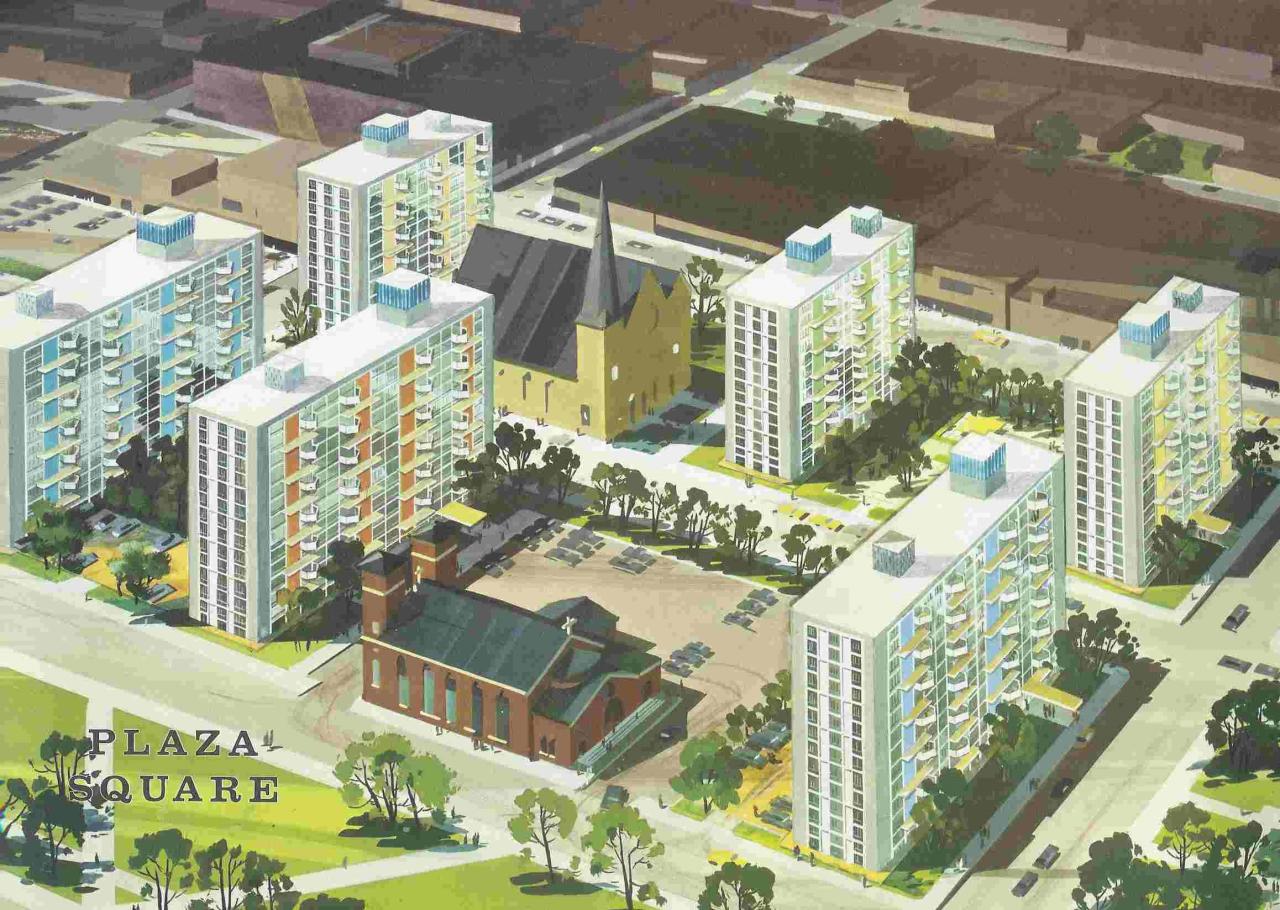 In addition, Mills argues that the garage will seek to minimize the architectural intrusion. There would be 20-foot setbacks from buildings 20 and 30, allowing for landscaping between the structures. The garage facades would be covered in ivy and the concrete garage would be painted an off-white to match the existing buildings. The garage height of five levels above ground would be lower than the neighboring churches and much shorter than the 13-story apartment buildings.

The NPS has suggested that below grade parking would be acceptable here if the landscape above remained largely unchanged. For their part, Mills believes that the garage proposal satisfactorily addresses concerns related to preserving what makes the complex historic. They go as far as to argue that the garage “mainly differs from the underground garage in that it will not be exclusively built at or below grade. We do not believe that the sole factor of the Garage being built partially below ground and partially above ground should be decisive to eliminate the historic character of buildings 20 and 30 Plaza Square.” The garage would be five stories above grade and one below.

{detail of proposed garage between Plaza Square buildings 20 and 30} 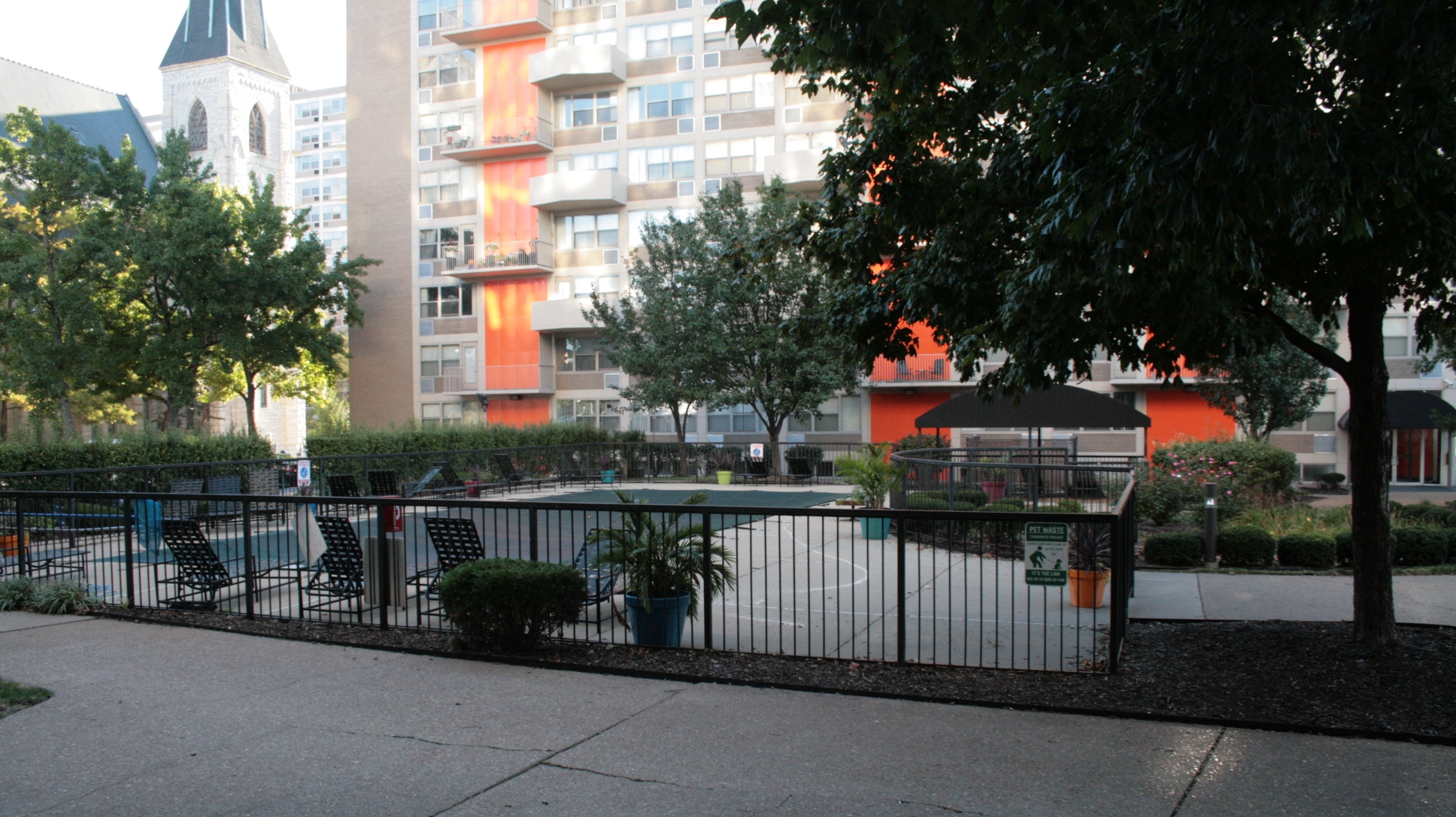 It’s easy to sympathize with the economic argument. It’s important that these buildings be economically viable. It’s a challenging development, and if this were simply a question of a building permit needing a zoning exception, it may be a more straightforward issue. However, the National Register designation holds meaning for a reason. In a practical sense, it’s all about accessing tax credits. To do so, the project must retain historic integrity. When details as small as window moulding can determine eligibility for tax credits, it’s hard to imagine the NPS acceding to the garage plans. 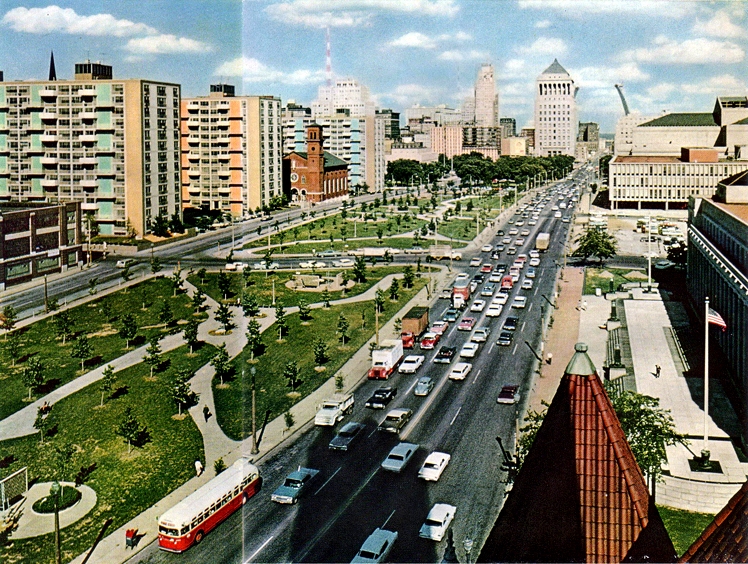 {a signature outcome of the city’s urban renewal efforts, Plaza Square has struggled to keep residents}

To be sure, the National Register is an economic tool, as much as it is a statement about our society’s shared values regarding our history and old buildings. And we’ve seen this issue play out in St. Louis before. The Midtown Saucer was targeted for demolition before being reborn as a Chipotle and Starbucks. Although the developer had received millions in public funds to rehab the Council Plaza historic district of which it was a part, they argued that it wasn’t really historic, but just included for some reason. St. Louis University was allowed to demolish the majority of the National Register listed Pevely Dairy complex in 2012, leaving only what was determined to be the most significant of the structures. In that case, the Lawrence Group argued that the complex wasn’t really historic and that it couldn’t be found in any books on historic architecture in St. Louis (yes, really).

In short, developers love the National Register listing when it provides access to public funds, but not so much when it outlines limits to redevelopment. In this case, it appears obvious that the addition of a five-story garage would greatly alter the landscape of the district and the appeal will likely be denied. Whether or not this is a good thing for downtown St. Louis is likely another conversation altogether.