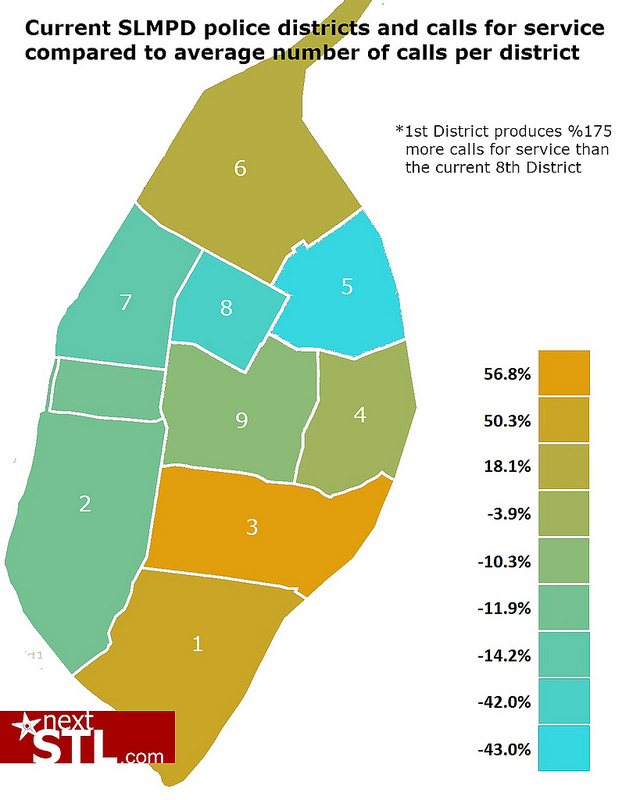 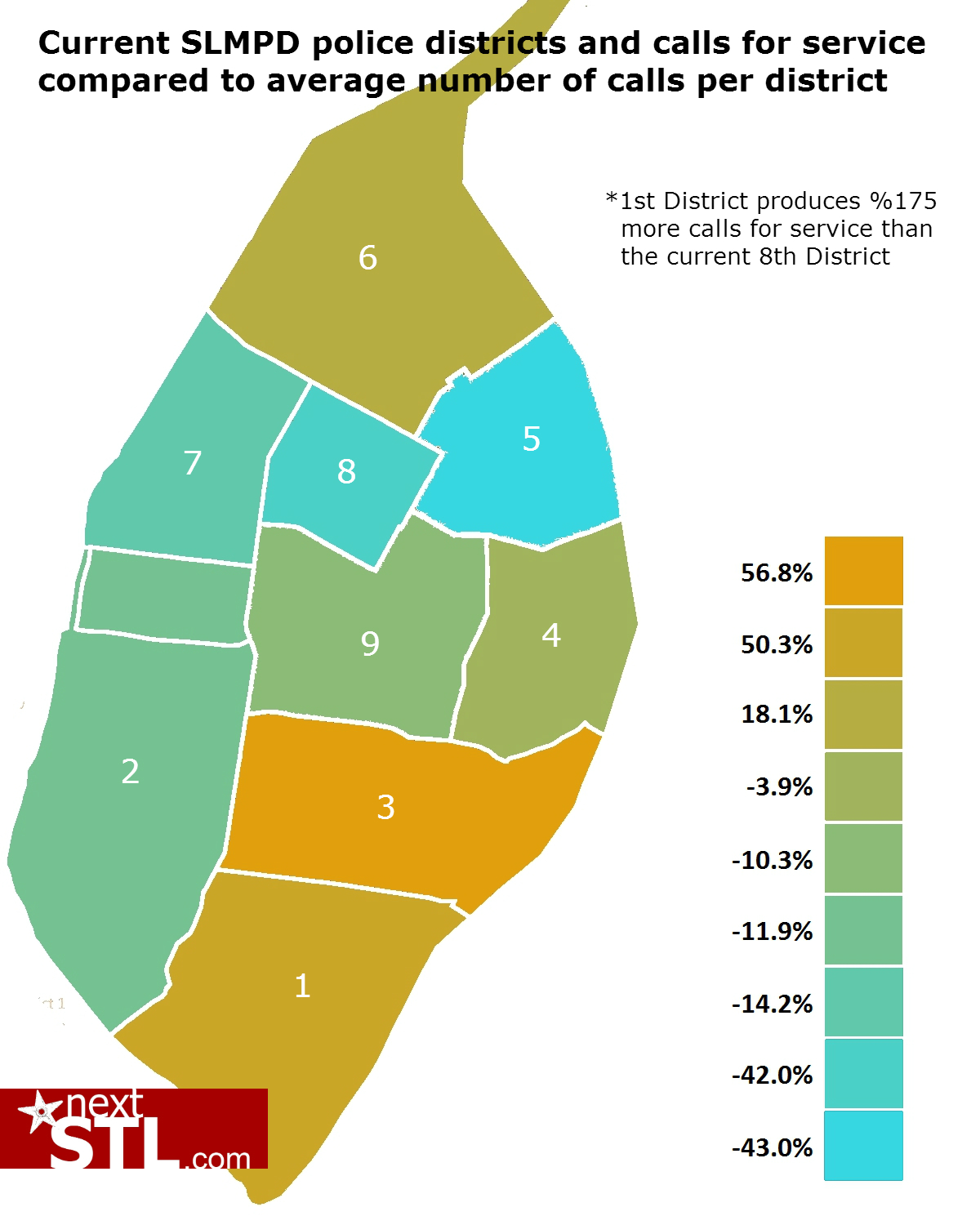 Cincinnati police have five districts to serve 332,458 people over 79 square miles. Pittsburgh has six districts serving 306,211 residents over 58 square miles. Indianapolis uses six districts to cover 824,221 residents across 364 square miles. Today St. Louis has nine districts for 318,000 people across 62 square miles, and it’s been that way for half a century. But the city now has control of its own police force for the first time since the Civil War and is beginning to show what that means. There’s no definitively correct answer to how many police districts the city should have, but a careful consideration regarding how the St. Louis Metropolitan Police is organized across the city is clearly long overdue.

Before leaving the post in 2012, Police Chief Dan Isom proposed to the city’s Board of Alderman a plan to merge the 5th and 8th Districts (leaving others unchanged), saying at the time that population and calls for service had declined significantly in the area that includes The Ville, Fairground Park and neighborhoods stretching from the river to Kingshighway. With local control a reality, current Police Chief Sam Dotson has doubled-down on redestricting and is proposing the city shed three districts and be reorganized into just six.

Since the last redistricting, the city has lost well over half its population, and that loss hasn’t been close to uniform across the city. Today, calls for service and the number of Index Crimes vary greatly from district to district. The number of patrol officers assigned to a district varies from 256 in the city’s 3rd District to 145 in the city’s 8th District (calculated using total calls for service and calls for service per officer as reported by SLMPD), reflecting changes in crime and population across St. Louis over more than 50 years and highlighting the need for redistricting. That 175% greater number of calls in the 1st than the 8th (graphic above), is handled by just 38% more officers. More clearly, a 1st District officer answers 599 calls for service on average each year, while the average 8th District officer answers 356. 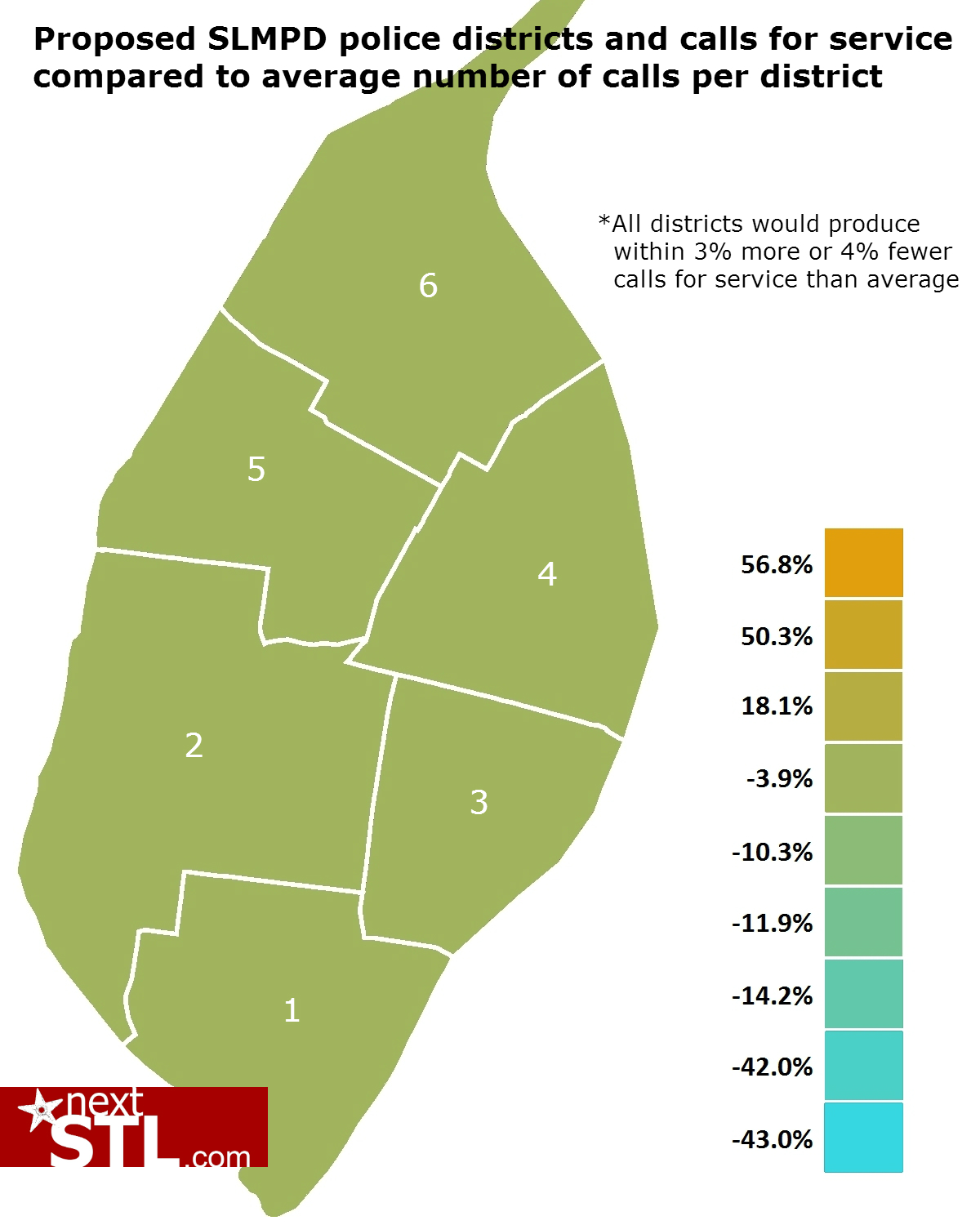 The new plan aims for six districts that would receive nearly the same number of calls per service and have nearly the same number of patrol officers. Differences in the number of calls for service range wildly, with the 1st District producing 175% of the calls of the 8th District. The plan would reduce the greatest variation between districts to no more than four percent and assign an equal number of officers (approximately 200) to each. Two exceptions would be the 2nd District which would be assigned six additional officers to help patrol Forest Park, which sees millions of visitors each year. Downtown, home to tens of thousands of workers each day and several million attending events, conferences, or on vacation each year, would be home to 20 additional officers. Each district has one captain, four to five lieutenants and 15 to 17 sergeants. Adjustments to those numbers are planned to occur through attrition and not changes to current staff.

These inequities in policing seem ridiculous. “I want to police all parts of the city the same,” Dotson told the Post-Dispatch earlier this mont. “Now there will be no inequities between service, and each district will have the resources they need based on qualitative data. Before, the maps were outdated and I didn’t have that confidence.” Since 1962, Missouri State law has required the city to have nine police districts. With shifting boundaries, some will worry about a decreased police presence in their neighborhood or ward. But this simply represents smarter policing. It may not seem revoluationary that the city police department is using math to fight crime, but if a little commonsense is the outcome of local control, the effort’s been worth it.

There are few things more basic to the Police Department’s operations than the manner in which we divide our city into police districts. More than just lines on a map, the district boundaries have a profound impact on things such as leadership, organizational structure, staffing, available resources, budgets, response time, neighborhood identity and radio traffic management.

Since the last major district boundary change over 50 years ago, the Department has followed a model of nine patrol districts equally divided among three patrol areas. When that arrangement began in the 1960’s, it worked just fine for a city with 750,000 residents and upwards of 2,200 sworn police officers. Yet as we all know, times change and circumstances change with them. The city now has 320,000 residents and around 1,250 sworn police officers.

From every crucial point of view – customer service, officer safety, organizational efficiency, etc. – the old nine-district model no longer makes good, practical sense and there is now a pressing need to change it.

Fortunately for us, the needed changes are not difficult to see. Over the last nine months, the best and brightest from our department have been working on a plan to redistrict our city. They have put hard work and thoughtful consideration into a meaningful plan. The time has come to reorganize our patrol districts in a way that reflects the current reality.

The solution is a transition from nine districts to six, in a way that preserves the three-area model. Our city will still have a North Patrol Division, a Central Patrol Division and a South Patrol Division. Under the proposed changes each of these divisions will contain two districts instead of the current three.

The new boundaries have not been drawn arbitrarily. A careful study of calls for police service has been done to create new district boundaries. This was a data-driven analysis that scientifically and fairly apportion police resources throughout the city. Freed from the constraints of an outdated system, officers will be strategically sent to the places where they are most needed. This, along with the staff efficiencies gained by consolidated command structures, would mean more officers on the street for longer periods of time.

Alex is the founder of nextSTL.com. He earned a B.A. in Journalism and Masters in Public Affairs at Indiana University and has studied in Adelaide, Australia and Perugia, Italy. Alex can be found on Twitter @alexihnen and reached at [email protected]tl.com