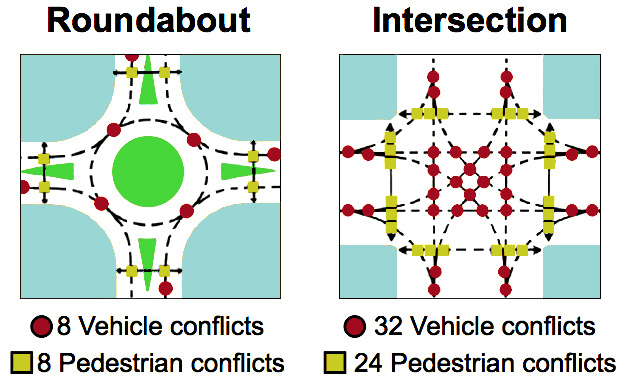 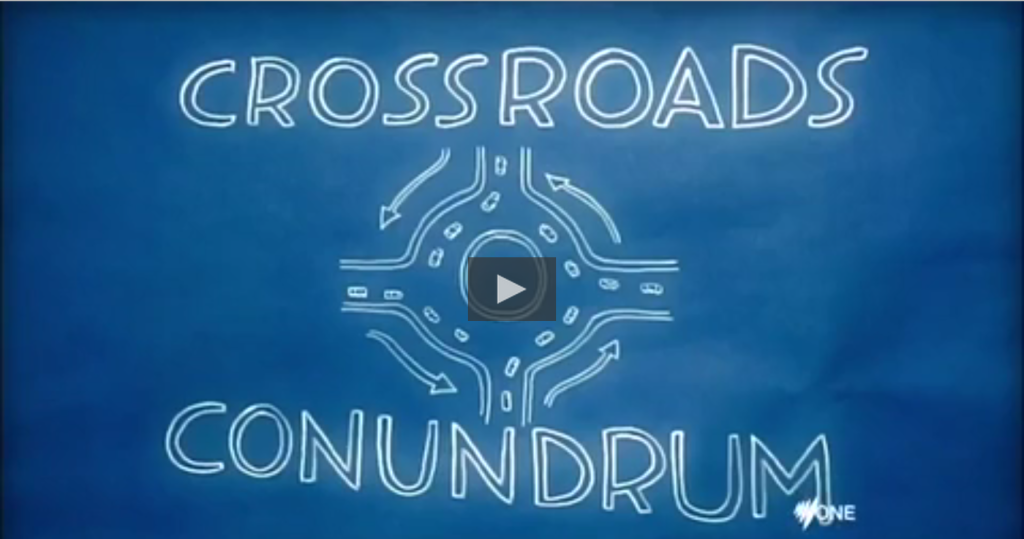 Who doesn’t love MythBusters? I mean, I’m still perplexed by the staying drier by walking and not running in the rain thing, but these are generally pretty fun. So Jamie and Adam recently took on the traffic throughput of a four-way stop intersection versus a roundabout. You’ll have to check out the video above to the get the result, but one was 20% more efficient than the other. Of course for anyone intereseted in the four-way stop versus roundabout and how it actually works in a city, plenty of questions and issues were left undiscussed. This MythBusters was unfortunately only focused on the level of service for drivers.

How do the various intersections work for pedestrians? Bicycles? What about collisions in a roundabout? The traffic throughput may not even be the primary argument for roundabouts. Even if a roundabout handled the same or fewer cars, slowing traffic, and the elimination of dozens of points of conflict and the potential for head-on vehicle collisions would be a strong argument in their favor.

Recently we pulled together a compilation of videos showing how to navigate a roundabout and included images of the roundabout coming to University City: Nine Videos to Help You Navigate a Roundabout. 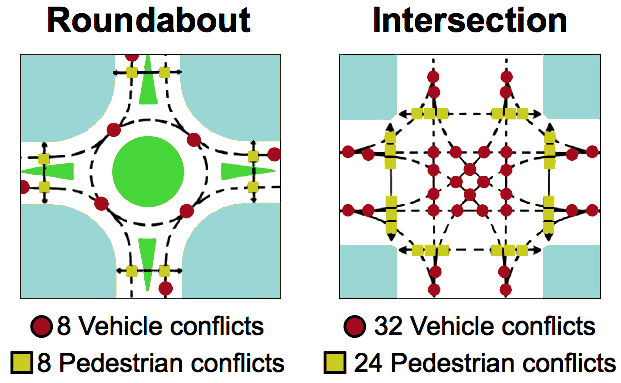 Added graphic to highlight the vital importance of slowing traffic at conflict points:

These discussions regarding roundabouts never seem to cease. Anecdotes can be helpful, but in this case, there is a large body of study on the issue. Unless one asserts some type of driver exceptionalism (see incompetence), the evidence that roundabouts safer than traditional signalized or signed intersections is overwhelming. The Institute of Transportation Engineers (ITE), Federal Highway Administration and many state DOTs agree. If you’re really into this, you can read the recent ITE here. A snapshot regarding previous research from around the world from that report:

In 1992, a before-and-after study was conducted in the Netherlands of 181 roundabouts that were previously stop controlled or signalized intersections. They found that the number of accidents in a year dropped by 51% on an average and the injury accidents decreased by an average forty four percent.

A before-and-after study of 73 roundabouts in Australia conducted in the year 1981 showed a reduction of 74 percent in the casualty (i.e., fatality) accident rate and a 32 percent reduction in property damage accidents.

In Switzerland, two roundabouts built in 1977 and 1980 were studied for 4-8 years after they were converted as roundabouts from the conventional intersections. The findings of the study were that there were reductions of 75 percent in total accidents and 90 percent in the number of injuries.