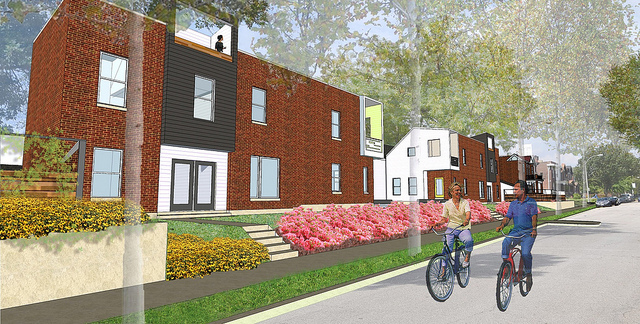 This week's Preservation Board meeting has a little bit of everything. There's the usual vinyl windows installed without a permit, but also proposals for 25 new homes, a mixed-use building in Soulard, a sign variance for a long vacant Lafayette Square property and bear pits (yes, you read that right). Here’s a run-through of the agenda’s items. 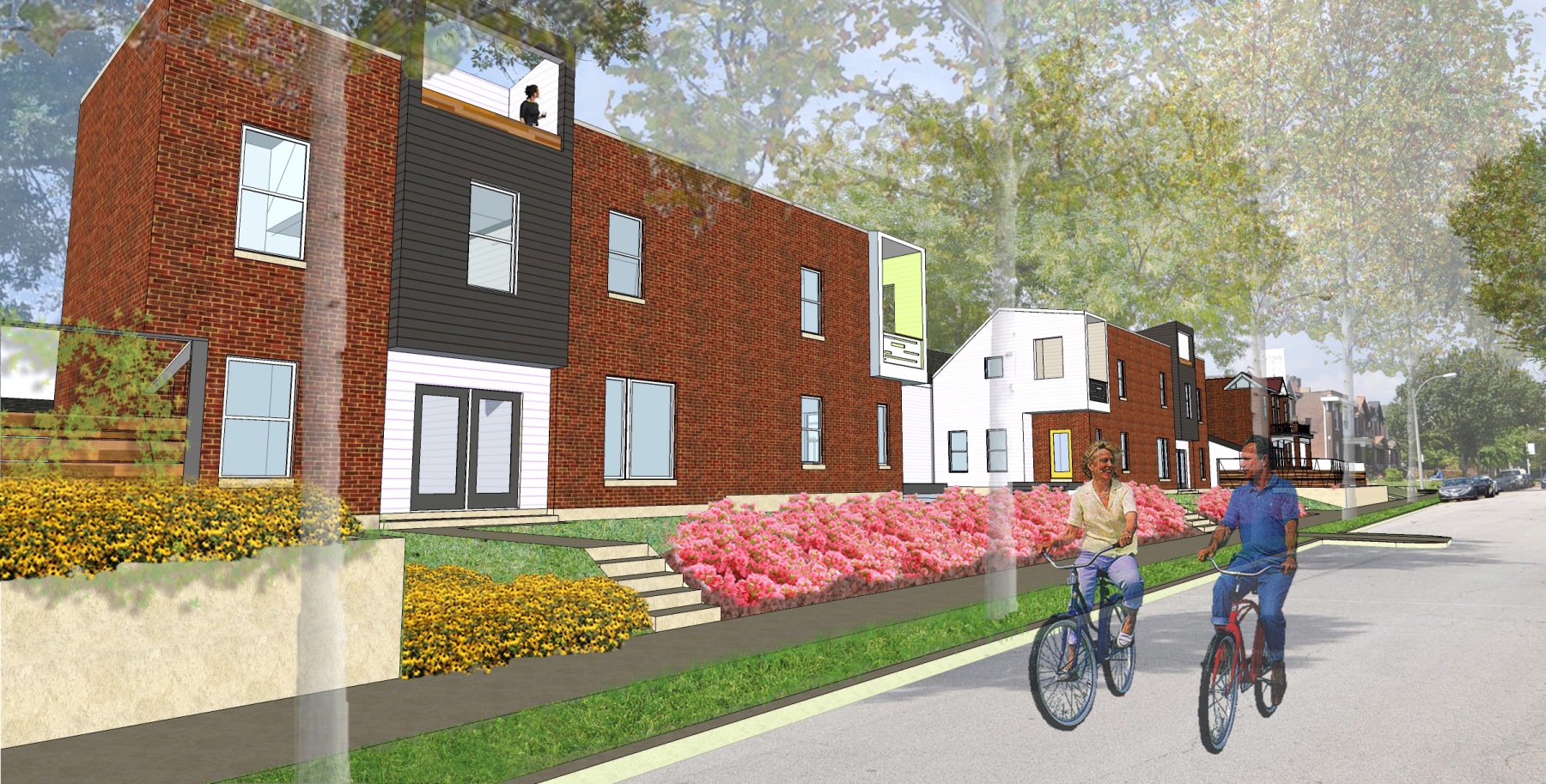 This is the revised proposal from UIC detailed here on nextSTL. While the initial proposal received a pile of “does not comply” from the city’s Cultural Resources Office (CRO), the latest proposal seems to have won over Betsy Bradley and her staff. The recommendation is to grant an exception to the Shaw Historic District Standards and issue preliminary approval. With local resident and political support lined up, it’s expected that the Preservation Board will go along and the project could break ground soon. Reading the previous CRO recommendation and the current one is a lesson in the fine art of winning approval for a project in a Local Historic District.

{rendering of UIC proposal for homes on Blaine Avenue}

Here is UIC’s Botanical Heights Phase II. As described in this nextSTL article, the St. Louis Flounder is back, and although a different building form than currently represented on the block, the CRO is okay with the variation (though the number built will be limited to three), as well as small differences in porches and entryways. What it doesn’t like is the lack of brick or stone on the home’s facade. The proposed cement fiber board panels aren’t specifically prohibited, but they’re similar to excluded materials and clearly not brick or stone, the two approved facade materials. This is unfortunate as the one-brick thick facade veneer of other nearby infill fails to project “historic”. Accompanied by the inevitable thin slat siding on the remaining three sides, the facadematerial requirement should be reexamined. The proposed material here appears similar to that used by UIC on their residential project in Forest Park Southeast. There, the lack of a Local Historic District allows more variation, but it of course allows steaming piles of architure like this as well. 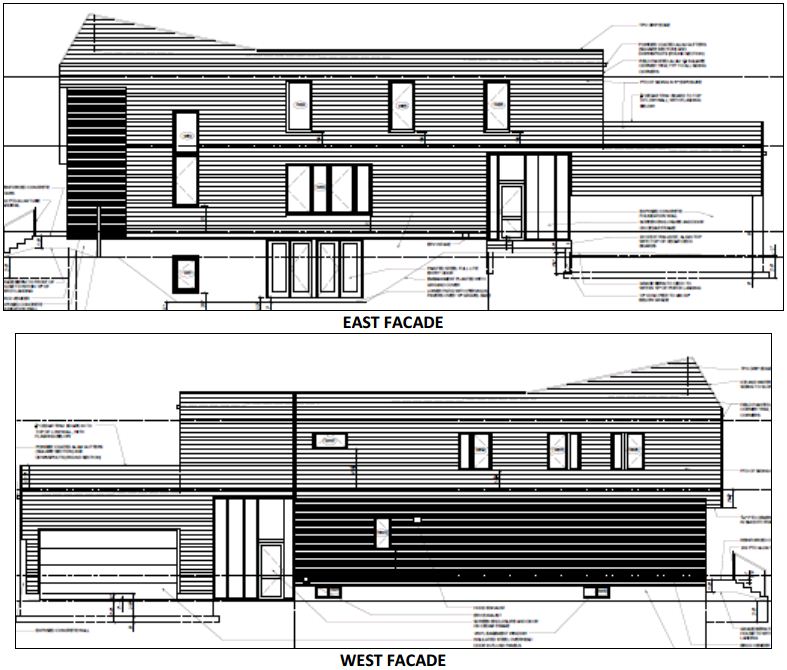 This project gets CRO approval as it is “compatible in scale, setback and height and continues the use of a contemporary aesthetic for new construction in the North I-44 Local Historic District. It’s been mentioned several times now, but for the moment I’ll skip over the issue of including an Interstate in the name of a Local Historic District. Anyway, the reasoning employed by the CRO here is novel. First is the recognition that the project would continue “a contemporary aesthetic” for new construction within the historic district. There’s nothing inherently contradictory about this as districts mostly concern guidelines with massing, setbacks, roof type and materials. Continuing existing architectural details is one consideration, and here the CRO concludes the project “complies in intent”. More novel reasoning is employed to endorse the use of wood siding on the home’s facade. Here, siding is an approved material per the district’s guidelines, but only for use as “decorative trim” and “uneclosed rear porches”, making the CRO endorsement a little confusing. Or more to the point, the endorsement here makes the disapproval of the cement fiber board panels on the 4142-58 Blaine homes feel quite arbitrary.

A single-family traditionally-styled infill project has received a positive recommendation from the CRO. The scale, mass, orientation, etc. have been found to comply with the Soulard Historic District standards. The only hiccup appears to be that that interior floor levels do not align with the adjacent home and the CRO is asking that this be addressed in further design revisions (the Soulard code is exacting).

{before image and a rendering of completed project and blade sign}

Back in December, Sauce wrote that Ted Kilgore of Taste fame would be opening The Planter’s House, a cocktail bar in Lafayette Square. What’s more, they’re opening in a long vacant and prominent building at the corner of Mississippi and Chouteau—great news all around. So why are they before the city’s Preservation Board? They want a big honkin’ blade sign to announce their presence, something Lafayette Square Historic District standards frown upon. But here, the CRO is reconmmending an exception be made “as there are site-specific conditions that limit visibitilty of signs” that would be required by the standards. The proposed sign is 1,728 square inches, much larger than the maximum 800. It’s proposed to be placed above the second story window sill, another no-no. Given that the entrance columns, themselves presumably protected by historic code, would block the prescribed sign, the CRO recommends approval. The Preservation Board is likely to agree.

{one block east the value of retaining buildings is clear}

The Garden District Commission argues that the demolition is required in order to serve the remaining 6 apartments with off-street parking. The Commission is also playing a shell game with Historic Tax Credit rules. If a developer bought the building and tried to demolish half of it, they would very likely find themselves being denied Historic Tax Credits for the remaining portion of the building. But if the Commission demolishes the wing facing 39th Street and sells the the property, the tax credit reviewers would not be able to punish the developer of the remaining building because it is a different owner.

39th Street at left in the aerial view above was the demarkation between the clear ant re-build development and the remaining neighborhood. 3867 Lafayette sits at the west end of a remarkably intact block and one needs to look no further than the other end of the block to debunk the Garden District Commission's argument for demolition.

Why? In likely less than an hour Paul Hohmann has clearly illustrated an easy alternative to demolition and effectively highlights why demolition isn’t needed in the first place. If the City of St. Louis really cares about sustainability, density and an economically vibrant city, decisions like this should be simple. Make an effort to accommodate parking (perhaps as Paul suggests, or simply use abundant street parking as neighboring single-family homes leaving stret parking open), espouse the merits of added density, show examples that work today, and deny demolition.

{existing streetview of 7th and Geyer in Soulard}

It’s a two-story building housing a Subway restaurant on the first floor and it looks like it’s on its way to approval. The CRO recommendation: “That the Preservation Board grant preliminary approval for the proposed new construction with the stipulation that the Geyer Avenue setback and retaining wall materials are brought into compliance with the Soulard Local Historic District Standards, and that final plans and design details be approved by the Cultural Resources Office for compliance with the district standards.” Basically, it appears that the building would like to have a sidewalk patio space (and extra 10-foot setback) on Geyer. That’s not going to be approved, but why not snag four of those parking paces and build a Soulard-style patio (assuming city regulations would allow a sea of parking in lieu of an ocean).

{existing streetview of southeast corner at Euclid and Maryland} 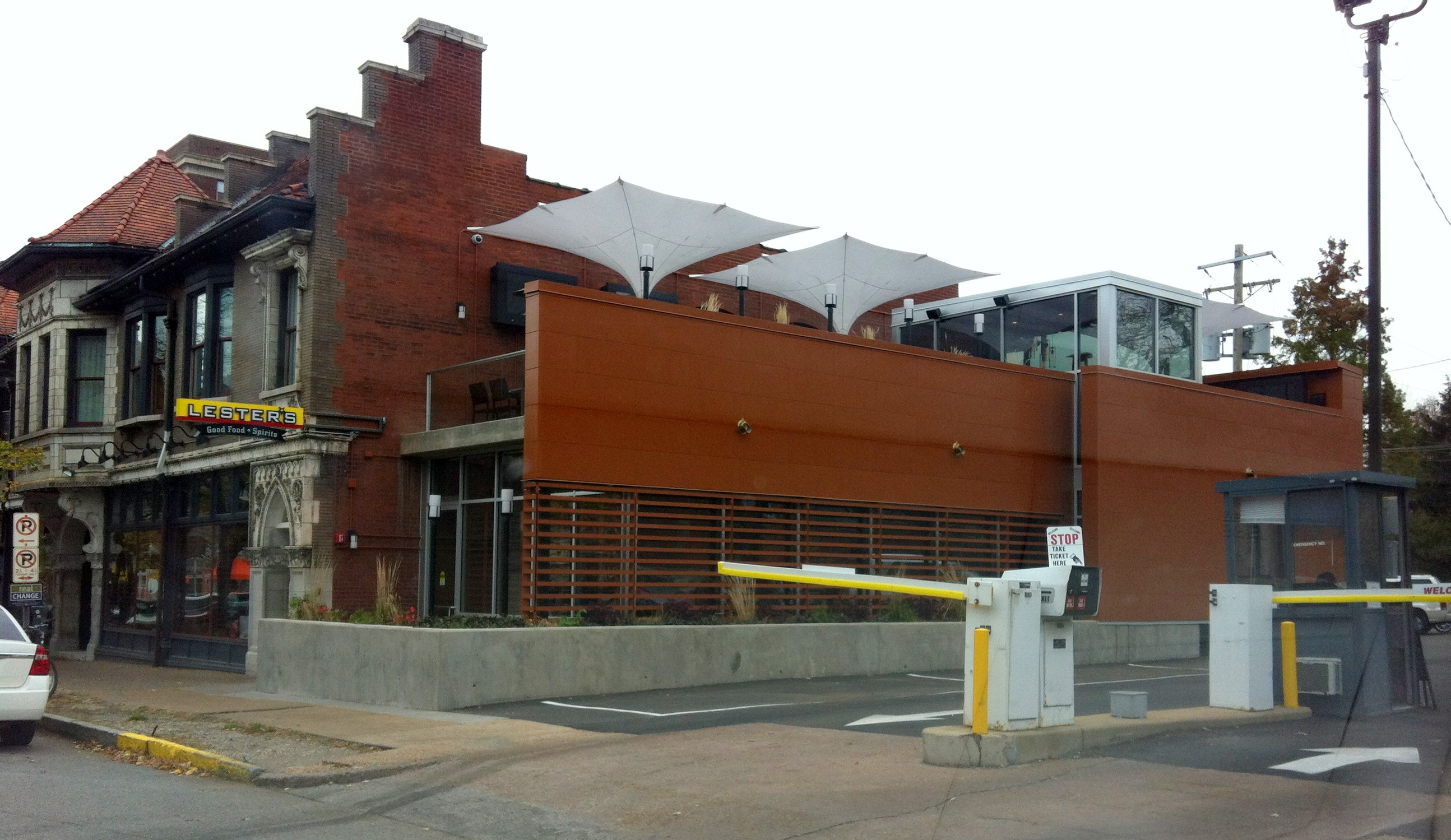 {across Euclid, Lester's built an addition on the footprint of a previous enclosed patio}

The Central West End Local Historic District has a particular focus on the streetscape, uniform building heights, setbacks, materials, historic entryways, etc. Here, the Gamlin Whiskey House, to open in the space formerly occupied by Liluma, hopes to build a four-season structure where the outdoor patio dining space has long existed. While changes to facades have been approved when shown to be temporary and physically unobtrusive (see Maryland Plaza), larger additions and other changes are unlikely to be met with approval. It’s difficult to argue here that the change would not result in a significant change to the Maryland/Euclid streetscape. Nearby exceptions exist with the Starbucks pavilion (extant for many years) and the addition to Lester’s (built upon the footprint of prior enclosed patio), but neither match the details of this proposal. 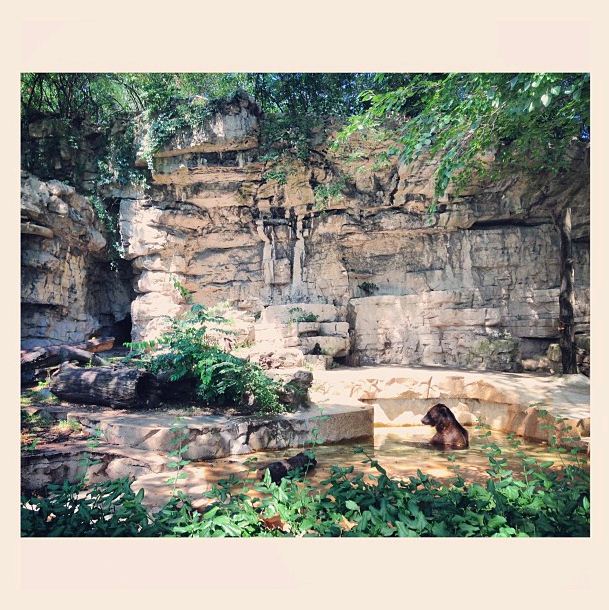 This sounds boring—probably some office to house bureaucrats and paper files, right? Nope, we’re talking bear pits! Specifically, the request is to build a new polar bear habitat in place of historic bear pits. The CRO is considering the project bu ordinance because the zoo is located in Forest Park, a city property. The pits were opened to the public in 1921 and were reportedly a design-forward approach at the time. The facade from the city’s original bear pits from the zoo in Fairground Park still exist, but have found a much more utilitarian use. Back to the proposal, there’s a lot to consider when assessing a new polar bear home, does the facade match adjacent homes, is there adequate parking…but seriously, the CRO worked with the zoo to alter the elevations that will be visible from within Forest Park so that they better meld with the existing serpentine brick wall. For more on the planned Polar Bear Point, check out the video rendering. 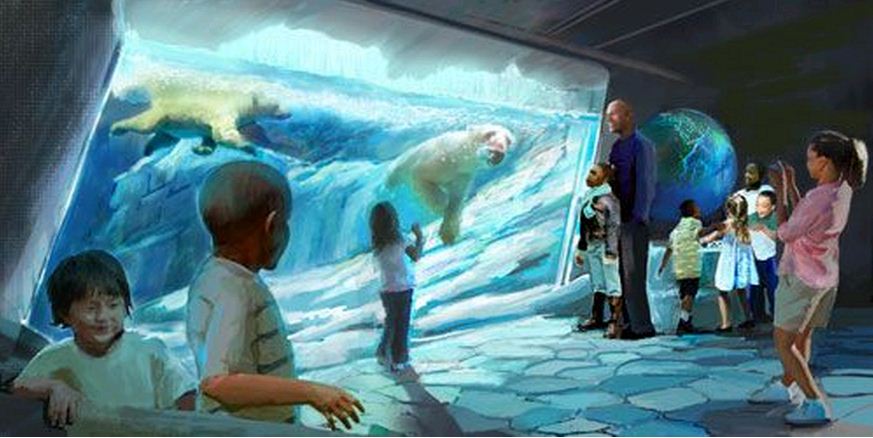 {rendering of Polar Bear Point by the Saint Louis Zoo} 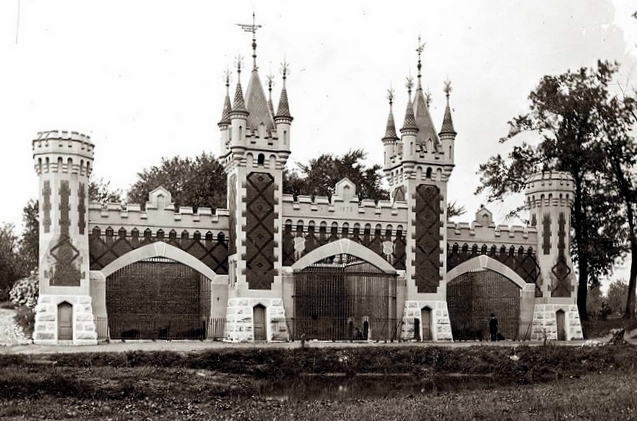 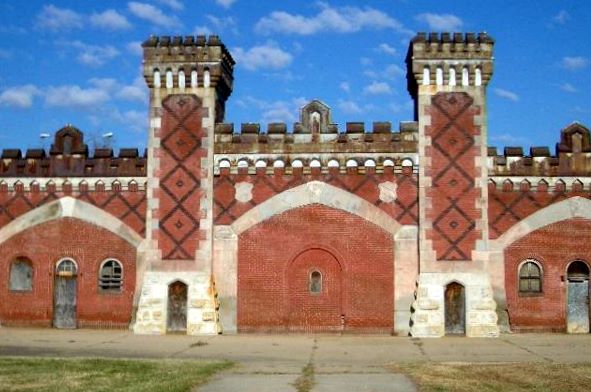 City of St. Louis Preservation Board Agenda August 26 2013 by nextSTL.com