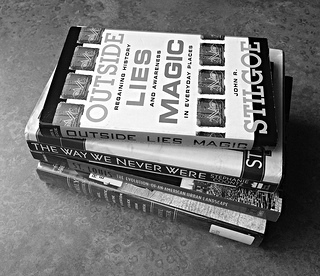 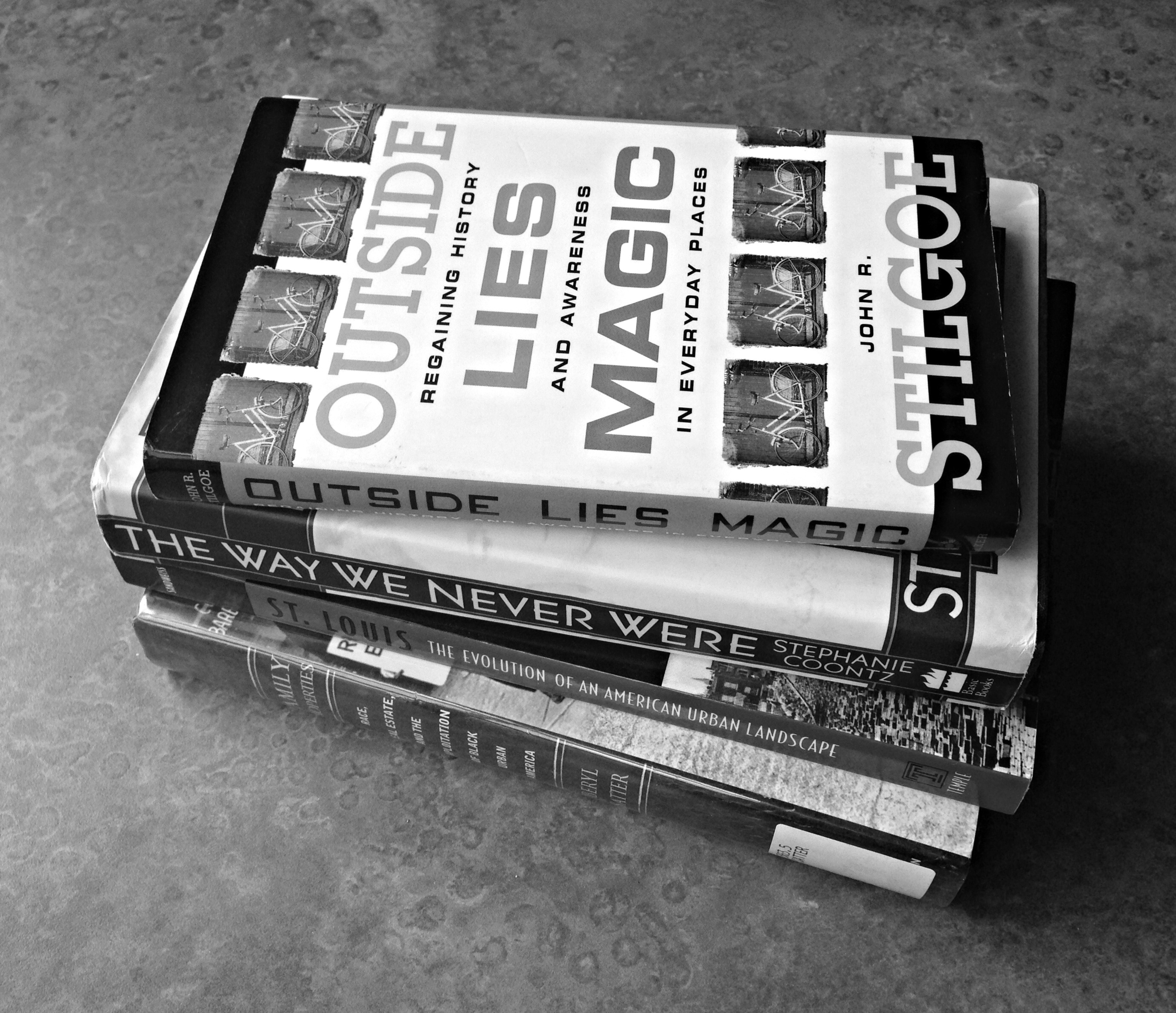 It's the end of summer, you've already spent a week in Branson for family vacation where you devoured 50 Shades of Gray. You're back in the city—what to read next? Putting together a reading list could stretch for pages, and never be complete. St. Louis is the subject or setting for many excellent fiction and non-fiction books alike. Yet the best way to understand our city is to know more about the social, legal, and physical world around us. And so, here are four books to describe the physical evolution of St. Louis, the exploitation of black urban America, dispel the nostalgia that grips both the city and the suburb, and finally, to draw our attention to the magic of our everyday places.

St. Louis: The Evolution of an American Urban Landscape (Left Bank Books)
Author Eric Sandweiss focuses on a two-square-mile area of South St. Louis, bounded on the west by Grand Avenue (the western city limit from 1855-1875), on the east by South Broadway, on the north by Lafayette Avenue and the south by Chippewa Street. It's an area likely known well by many readers of this site. Today, this area includes the neighborhoods of Compton Heights, Tower Grove East, Gravois Park, Benton Park West, Benton Park, Fox Park, McKinley Heights, and Soulard. The author literally goes stone-by-stone and brick-by-brick as he unfolds the setting and circumstances by which each street was paved and each subdivision built.

The book isn’t easy to read. You might not enjoy it, but the editorial reviews seem to corner its value: Sandweiss deftly shows his readers how and why ‘form’ followed a wide range of functions—economic, political, and social—in St. Louis. [The book] offers a rich and satisfactory account of how city neighborhoods, and especially working-class neighborhoods, were built in the nineteenth century and what happened to them in the twentieth. … Sandweiss shows how seemingly small decisions about ordinary aspects of urban life—like the placement of porches in the front or the back of buildings and the purchase of pavement from private or public funds—activate enduring and seeming irresolvable tensions in urban life.

Sandweiss concludes with an epilogue considering the second half of the twentieth century and urban planning. Quoting Isaac Lionberger (civic leader, planning advocate, amateur historian, resident of Westmoreland Place): “Whole districts are deserted, and a city full of empty dwellings is ever building new ones….Those who have the means move continually….The result of all these propensities is a broken and uneven city” (1920).

Family Properties: Race, Real Estate, and the Exploitation of Black Urban America (Left Bank Books)
“This is how the story of urban America after the Second World War ought to be written, with gritty realism and no illusions. Here is urban history as a drama of moral conflict and religious passion,” reads one editorial review. We all know that black Americans were discriminated against by real estate interests, individuals, and government policy, right? But how, and specifically by whom? Redlining, housing covenants, white neighborhoods flipping to black enclaves in a period of a few short years. The result of a rational market? Rational actors in a discriminatory market? In truth, it's racism, acted upon by all of the above.

As another review concludes, “In going small, [the book] ultimately goes big.” What is meant is that it’s an urban story we’re likely all vaguely family with, but by focusing on the intimate interactions, the minutiae, a Jewish landlord in the Chicago suburb of Lawndale and his black clients, the bigger story is told more clearly. Saul Alinsky and Martin Luther King Jr. make an appearance, but the focus on the moral dilemmas and daily struggles of lesser known citizens, best highlight why men like Alinsky and King came to prominence and were required by history.

If you’re not intimately familiar with this part of American urban history, you’ll be appalled and angered. You will also gain a better understanding of why, although this specific story is a half-century in our past, the economic and social effects of such history continue to define our politics. Residents, and our city, may be best served by living in the present, but anger and distrust due to past experience isn’t misplaced. Finally, the story is about a Chicago suburb in the 1950s and 60s, but could clearly double as St. Louis or a few other major cities of that time. And the story of discrimination didn’t end with a court case or the Civic Rights Movement. It’s not much of a stretch to expect to read a similarly disgusting story about the recent subprime mortgage crisis, today’s real estate profession and bank discrimination in the not too distant future.

The Way We Never Were: American Families and the Nostalgia Trap (Left Bank Books)
Perhaps the epitome of the counter-narrative, here’s the book in a nutshell: The golden age of the American family never existed, asserts Coontz (The Social Origins of Private Life) in a wonderfully perceptive, myth-debunking report. The "Leave It to Beaver" ideal of breadwinner father, full-time homemaker mother and dependent children was a fiction of the 1950s, she shows. Real families of that period were rife with conflict, repression and anxiety, frequently poor and much less idyllic than many assume; teen pregnancy rates in the '50s were higher than today. Or perhaps you’re more attuned to Billy Joel’s version: “The good old days weren't always good and tomorrow ain't as bad as it seems.”

The larger narrative is that our understanding of history, and certainly that story as historical written, should be challenged. Who authored our history? Who was listened to, who was ignored? Whose history are we actually reading? These are modern, but basic questions that any student or aficionado of history is inclined to ask today. It strikes me that these questions are nowhere more important than when considering our urban history. What myths about St. Louis and American urban history continue today and how do they impact our ability to face problems and generate solutions?

What should we be asking about St. Louis: What the height of the city when population peaked at 850,000? Was Mill Creek Valley so dilapidated that is simply had to be bulldozed? Were the residents of Pruitt-Igoe to blame for their own living conditions—and were those conditions worse than elsewhere in the city? Nostalgia is coopted by many. A developer seeking tax credits benefits by playing up the current state of neglect and abandonment. The city booster talks of the renaissance of an historic commercial strip. Understanding nostalgia can give us a more clear understanding of the city today and its potential for the future.

Outside Lies Magic: Regaining History and Awareness in Everyday Places (Left Bank Books)
A significant premise underpinning my interest in cities and St. Louis is that seemingly small decisions are made every day that shape our urban environment, and often these decisions are made without any public input or consideration of alternatives. An emergency demolition is approved, a street is excluded from or included in an historic district, a variance is granted, streetlights are chosen—and this incremental, methodical process over time creates the place in which we each live. It’s the result of these decisions, the ones that don’t make headlines, that dictate what we label writ large “quality of life”—the buzz phrase the everyone is happy to nod to today.

And yet Outside Lies Magic isn’t an urban book. Stilgoe wanders down Interstate highways, ponders road kill, wild flowers and rural motels. However, the practice of shapes and components of the built environment is nowhere more richly rewarded than in a city. “The acute observation of ordinary things” is the first, elemental, step in understanding St. Louis, developing the right questions to ask, and imagining other outcomes. As one online review reads: “When you drive home every day and pass the same buildings you have passed for years, you forget, you forget their significance and beauty. After reading this book I stopped just driving by this pieces of art in my city, I stopped and admired; Admired the beauty and historical value of something that everyone has taken for granted in today’s time.”

Taken together, Sandweiss’ St. Louis, Family Properties, The Way We Never Were, and Outside Lies Magic, provide a wide breadth of diverse ways to understand our city and the social, legal, and physical world around us. If you haven’t had a chance to read the books mentioned here, they can be found at Left Bank Books, and at the St. Louis Public Library. If you have read any of the books mentioned, please share your thoughts in the comments.