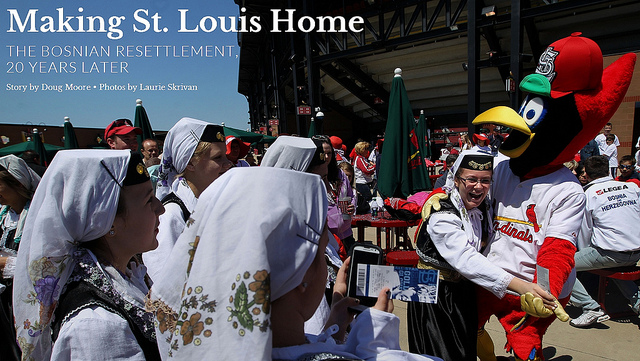 The largest Bosnian American community in the U.S. is here in St. Louis. It's traditional epicenter in the city's Bevo Mill neighborhood. The wave started in 1993 as the first refugees from the War in Bosnia and Herzegovina arrived. By some estimates more than 50,000 Bosnians eventually settled here. The Bosnian community has added greatly to the culture of St. Louis and by its sheer count helped stabilize a swath of the city that was otherwise emptying quickly. Now it's been 20 years since the first refugees arrived and Doug Moore of the St. Louis Post-Dispatch has penned a broad survey of the community.

It's an important story and it's good to see the Post-Dispatch present a feature using HTML5. Videos, images, readable text – it's exactly what the paper should be doing. A quick online search will show you there's plenty to read if you're looking for more after reading the feature. The Atlantic recently asked "Why Are There So Many Bosnians in St. Louis?" and you can check out the St. Louis Bosnian, an historical database, functioning much like a news site, of the Bosnian community here. There's a lot to learn about the historical circumstances that led to the city's "Little Bosnia", and much to understand about how the community is changing over time. Bosnians in St. Louis aren't exactly a secret, but their arrival here and what they have contributed and continue to give to St. Louis is an underappreciated chapter is our city's long history.


{the PBS series The Mighty Mississippi with Trevor McDonald visited the Bosnian community in St. Louis}