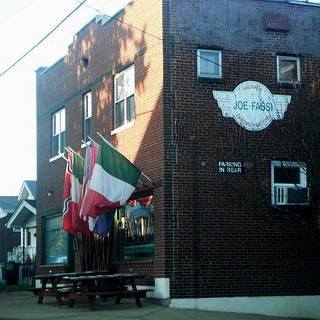 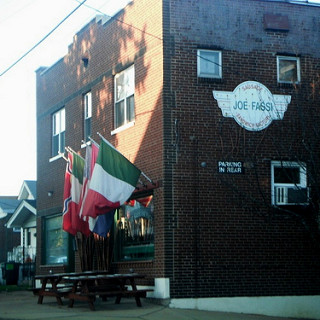 In the most decentralized of American cities, much of the urban fabric that prospered until at least the Great Depression (if not later) suffered such devastation in the second half of the twentieth century that one could claim it was wiped off the face of the earth. Huge swathes of what were once densely settled neighborhoods are all but gone, having lost more than half of their population since 1950. When one ponders the type of city that has suffered this fate, chances are it sits in either the industrialized Northeast or Midwest: places like Cleveland, Buffalo, Philadelphia, Baltimore, and even Chicago. In Detroit, the condition of nearly complete depopulation may afflict as much as half of the land within the historic city limits.

Another Midwestern city that has endured almost as profound of a loss as the Motor City—but mercifully manages to escape the damning headlines most of the time—is St. Louis. At its population peak in 1950, it had 850,000 people. As of 2010, that number had plunged to 320,000—an over 62% drop in population, and, amazingly even a bit greater than Detroit’s 61% loss over that same time frame. In stark contrast with Detroit, where the depopulation stretches in all directions from the city center, in St. Louis the majority of population loss has exclusively afflicted the north side of the city. Many of the neighborhoods south of I-44 are as intact and manicured as they were in 1950, like the serene Italian-American neighborhood on the near southwest side of town known as The Hill: 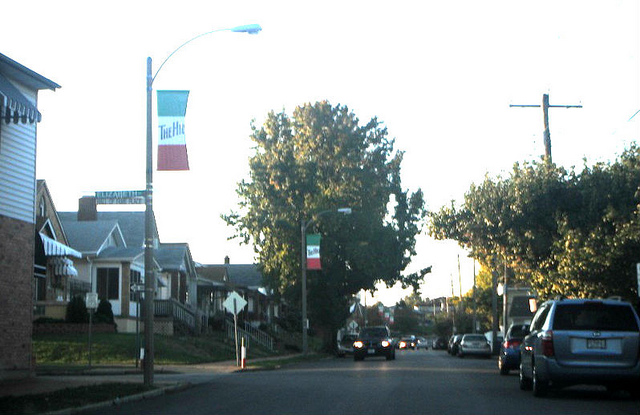 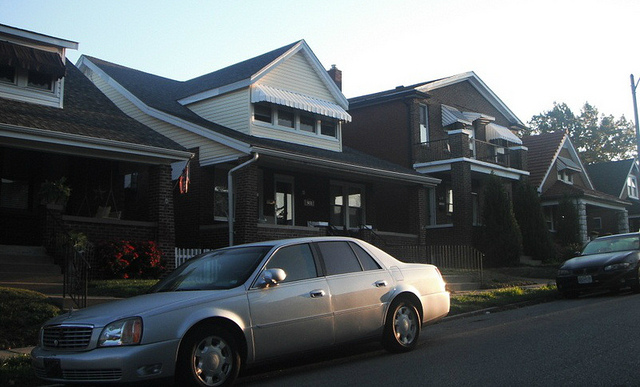 Conversely, a disproportionate number of neighborhoods north of I-64 are pockmarked with scrappy lots and widespread evidence of long-term abandonment. 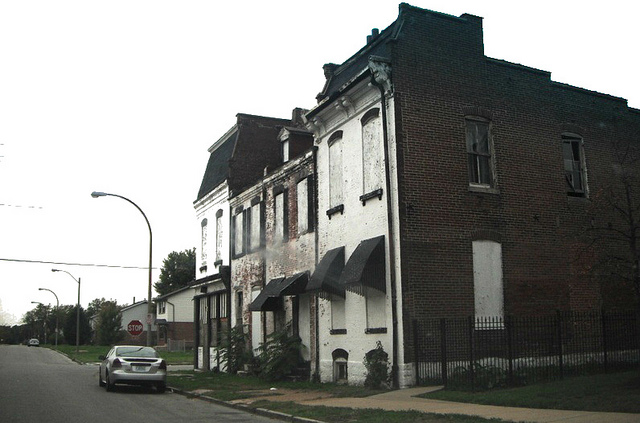 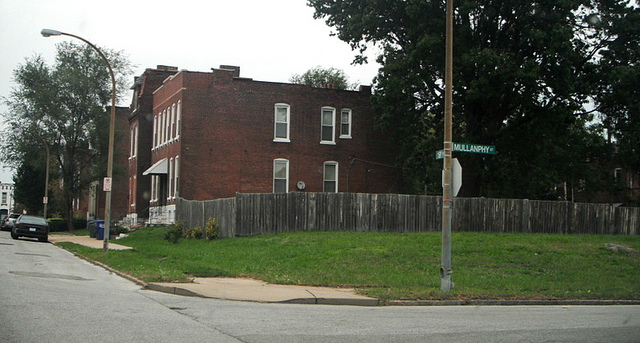 The map below, from the city’s Land Reutilization Authority, pinpoints properties owned by the city due to unpaid taxes. 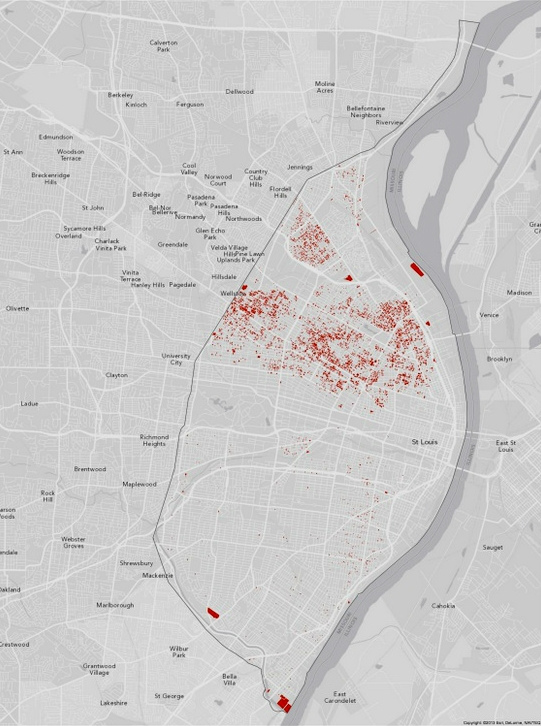 Obviously a preponderance of these properties rest in the northern half of the city. And yet, by many other metrics, greater St. Louis has stemmed its economic misfortunes, reflected in part through a modest but stable population growth of 4.2% across the metro area from 2000 to 2010. Thankfully, the bleak era from 1960 to 1980 has long since passed, when the city limits plunged over 15% between each decennial census—a true nadir for St. Louis. Nonetheless, the City of St. Louis continues to shrink: during the same ten years that the metro grew, the city lost another 8.3% of its population—smaller than any previous decade since 1950, but still enough that city leadership can hardly dismiss it as statistically insignificant. A fairly recent article by Wendell Cox in New Geography explored this dichotomy, noting in particular that greater St. Louis appears reasonably stable, despite a core city that has consistently withered now for over 60 years, due at least in part to its low domestic out-migration rate of only 35,000 people. Cox compares this rate to that of San Diego, a metro of comparable size to St. Louis but with domestic out-migration of 127,000. Even if St. Louis cannot attract newcomers to its historic city limits, the festering urban problems are not repelling people from the suburbs, nor is it prompting too many long-term residents to emigrate.

Detroit, by comparison, could only be so lucky. Within the city limits, it lost 24.9% of its population over just the last decade (2000 to 2010), making St. Louis’ loss of 8.3% seem meager. It’s difficult to assess greater Detroit’s population change, because the varying definitions involve different combinations of counties, and greater Detroit features strong economic links to other prominent cities nearby, while metro St. Louis sits in relative isolation. The conventional Detroit MSA involves six primary counties, which, if assessed for population change over multiple decades, also demonstrate an abysmal performance: from a 1970 peak of 4.5 million, the entire metro has declined in population in every ensuing decade except for a moderate gain during the 1990 to 2000 period. (Current estimates place the metro below 4.3 million.) Between the last two censuses, the Detroit MSA lost 3.3% of its population—a fairly uncommon phenomenon, as indicated by this Brookings Institution study, which reveals that most US metros maintain positive growth trends, even when the core city is shrinking (as is the case for St. Louis). Metro Detroit’s numbers seem a little less depressing if the Combined MSA serves as the primary measuring tool. The CMSA involves an agglomeration of counties that includes the previous six, along with three additional outer-belt counties that also house their own core cities to independent metros: Ann Arbor, Flint, and Monroe. Nonetheless, the Detroit-Warren-Ann Arbor CSA also reported population loss over the last two censuses—only not as severe, at only 2.5%. Whatever gains the prosperous Ann Arbor metro enjoyed, they have not been sufficient to offset the serious losses absorbed not just in the city limits of Detroit but in many of its inner-ring suburbs.

In short, both of the Midwestern cities of St. Louis and Detroit have suffered incredible population losses over the last sixty years. But only Detroit’s struggles have also permeated the entire metro; by and large, metro St. Louis has persevered despite the City of St. Louis’ vicissitudes. The real heart of this blog article is forthcoming, and in the second half I will focus much more pictorially on St. Louis’ efforts to stem its loss through some of the most proactive affordable housing construction in the country. But before delving into that subject, the macro-level influences that have shaped St. Louis current condition are worthy of consideration, particularly in relation to how the city has escaped the profound economic malaise of Detroit. Here are the two factors that I think are most critical at keeping the spirit of St. Louis alive and kicking:

1) St. Louis has benefited from a more mature growth trajectory. Until Chicago exploded in population due to the proliferation of railroads, St. Louis was the largest city in the Midwest, surpassing Cincinnati during the Civil War. It edged out Chicago in population in the 1870 census, but by 1880, Chicago had 150,000 more people (even despite the devastating 1871 fire). Detroit was barely a dot on the map at this time, and it didn’t make the top 10 largest cities until 1910, when the automobile industry had finally emerged as a key contributor to the American industrial economy. Detroit more than doubled in the next decade, and throughout the Depression Era, it was the fourth largest city, and twice as large as St. Louis. Seventy years later, the population ratio for Detroit and St. Louis remains around 2:1, but, of course, both cities have plunged approximately the same amount. Only Detroit, however, owes most of its population growth to the explosion of a single industry; with that industry’s subsequent domestic decline, the employment base could no longer justify so much population nearby. St. Louis’ more conservative growth pattern—in addition to a head start in urbanization—has helped keep its raison d’etre from ever suffering the same automatic association with a single industry as in Detroit. Still, despite its broadly different growth pattern, the city limits of St. Louis lost population at the same rate as Detroit’s. Why?

2) The housing stock in St. Louis fell out of favor more dramatically than elsewhere in the Midwest. Any outsider who visits St. Louis today is likely to find the inordinately high percentage of brick houses a bit disarming, at least in comparison to other Midwest cities. The legacy of brick construction evokes Mid-Atlantic cities such as Baltimore or Philadelphia, which, to a certain extent, makes sense: some of St. Louis’ strongest population gains parallel those of its East Coast counterparts, which also enjoyed steady growth through mid-19th century industrialization. And St. Louis shares with those aforementioned cities a housing typology that is otherwise rare in the Midwest: 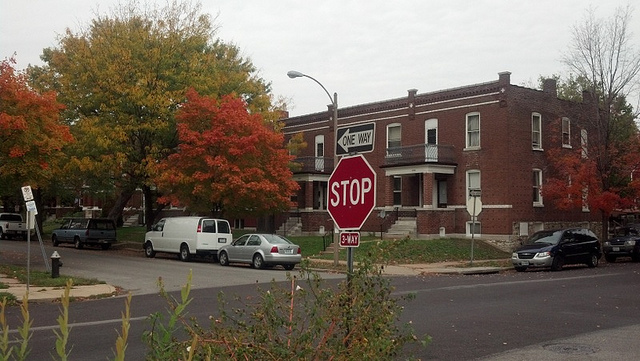 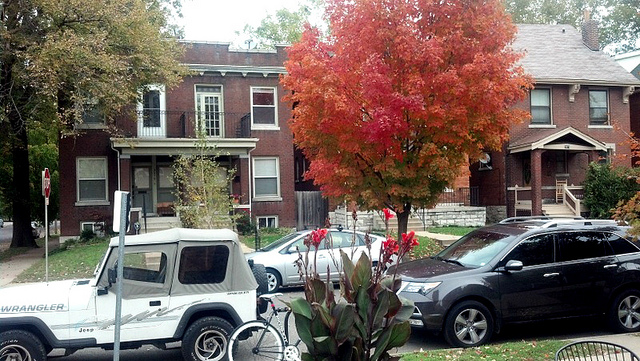 That’s right—St. Louis has rowhouses. While not all housing in St. Louis is attached (and the duplex is far more common in St. Louis than the Philadelphia/Baltimore rowhouse), the city has far more attached housing than, say, Chicago or Detroit. However close in proximity the homes in Detroit are to one another, they are almost always detached. With the emergence of the Levittown suburb by 1950, the attached house fell almost intractably out of favor. Families abandoned the rowhouse typology in droves in Philadelphia and Baltimore; no doubt the same pursuit of detached housing and small side yards prompted families in St. Louis as well. In addition, the brick construction, typically perceived as a desirable characteristic for its survivability, also seriously hindered families from making alterations or additions to their homes. The wood houses of other Midwestern cities proved far less constraining. Thus, in St. Louis at least, much of the flight from the city had less to do with a struggling industry and more just about a housing typology that was on the wane. In Detroit, people fled the detached wooden houses as well, not because they were passé but because the entire composition of employment was moving along with them.

These external forces collapse several decades of nuanced socioeconomic considerations into some sweeping generalizations. Obviously both St. Louis and Detroit have far more at stake than just historic population trends and housing stock, but the interplay of these two influences helps to shape what may prove the Missouri city’s lifeblood: its vigorous and unprecedented culture of widespread affordable housing provision, not just through restoring old homes or filling in vacant lots, but through the comprehensive reintroduction of entire neighborhoods. Part II, to be published at some point in the near future, will explore the St. Louis advantage through some of the key projects implemented by the city’s (and perhaps that nation’s) foremost private developer of low-income housing. While I urge my readership to stay tuned, I also welcome any comments on this First Part of the series—an ambitious, and, for me, particularly broad subject of analysis.

*this piece is reposted with permission from American Dirt: Observations of Contemporary Landscapes – a site based in Indianapolis, but which ventures off to everywhere from New Jersey to Memphis to Philadelphia with regularity – click on the link above and check it out

The American Dirt blog concerns itself with the foundation of American dirt, regardless of where I claim to “live” at that moment. It is the playing field and landscape upon which all living participants tend to their own aspirations, leaving non-indigenous built forms which my aging digital camera hopes to capture.