"Two St. Louis neighborhoods among 'most dangerous' " states the KSDK.com headline. Their Twitter account used the headline, linked to the story and asked followers, "Do you agree?" The site's first comment on the story began, "These communities SHOULD feel shame…" The story totaled just 108 words, just passing along a little danger ranking for you. So what's wrong with the story? A couple things.

First, the whole neighborhood crime stats ranking game is a play for page clicks and not for information or a better understanding of our communities. Also on the site of the organization responsible for these rankings: Most Dangerous Cities in America, America's Best Public Schools, and Safest Cities in America. For $88 you can order an "instant, objective" "complete risk profile" for your home address. So there's that.

It may not be surprising that the company hoping for local news stations to parrot their junk isn't particularly thoughtful in their use of statistics. They basically use the total number of violent crimes, divide by the number of residents and declare under the heading, "My Chances of Becoming a Victim Here (in one year)" that a resident of their "Delmar Blvd / N Euclid Ave" Census tract "neighborhood" has a 1 in 12 chance of becoming a victim of violent crime in the coming year.

There are two explicit problems with this statistical aggregation: 1) Does it increase the likelihood of a resident becoming the victim of a violent crime if a visitor to a neighborhood is the victim of a violent crime? What if an area has very few residents but a high concentration of nightclubs? 2) If a resident is the victim of multiple crimes in a given year how does this affect the chance of a resident becoming a victim? More basically, we know that one's chances of becoming a victim of crime depends primarily on lifestyle choices and not address of residence. There's more from nextSTL here: Neighborhood Crime Ranking: True, Factual, Standardized Statistics Can't Lie, Can They? 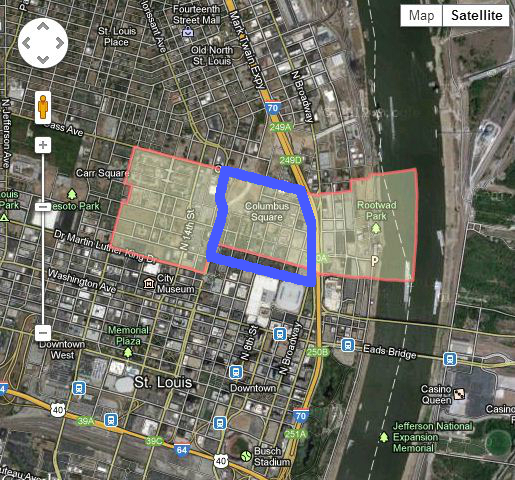 The company hoping that local news stations will parrot their junk stats is going to do what they do. They hype crime and make money from it. To be clear, examining crime rankings and considering what they say, what they don't, and how numbers are cut and pasted as news, isn't a denial of crime or meant to lessen the seriousness of the issue of crime. The issue is that local news bears a unique burden of digesting the junk that comes their way about our city and using it to inform us. Here is where KSDK commits journalistic malpractice.

First, the station puts together a brief story that serves to validate the rankings, passing them along as some kind of public service FYI. Second, and more unfortunate, KSDK attempts to translate the link bait junk to its audience, but fails in attempting to transpose actual neighborhood names on the story. The problem is that neighborhoods are defined places and labeling them as "most dangerous" has consequences. 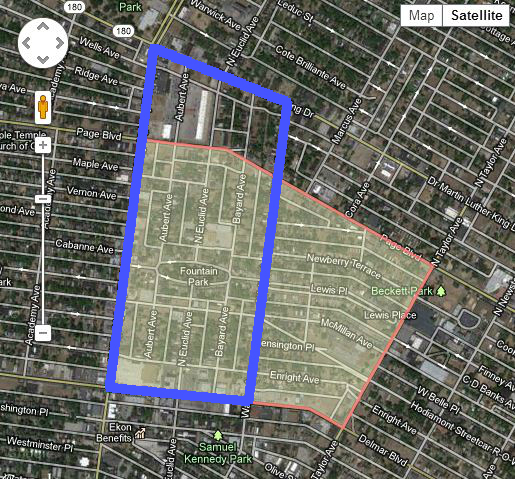 The names of neighborhoods and locations matter to residents and should matter to local news. However, city geography often doesn't seem to matter. Two days ago, KSDK posted a story with the headline, "Man killed when vehicle hits downtown traffic light." The accident in question wasn't downtown, but no matter, that story is still up. Murders in the West End have been reported as the Central West End and so on. Perhaps news organizations think the much more simple geography of four city neighborhoods (Central West End, Downtown, North and South) is complex enough for their viewers. Let's just hope viewers aren't hoping to actually learn about their city while being fed junk science from stat aggregators.

The KSDK scary neighborhoods story states, "The Fountain Park & Columbus Square neighborhoods were ranked 12th and 22nd respectively." This isn't accurate. "Delmar Blvd / N Euclid Ave", an area that encompasses roughly 4/5 of Fountain Park and half of Lewis Place, was labeled as 12th. "Cass Ave / N 9th St", an area that encompasses most of Columbus Square, half of Carr Square, a sliver of Downtown West and a portion of the Near North Riverfront neighborhoods, was labeled 22nd. Journalistic shorthand I suppose.

KSDK does accurately describe the boundaries of the Fountain Park and Columbus Square neighborhoods in their story, the problem is that these aren't the same areas used for the rankings. Using the neighborhoods listed in the previous paragraph would have made the story more accurate and left just one act of journalistic malpractice remaining. That would at least be a start.