The Drury Development Corporation in partnership with the Lawrence Group are in the preliminary design stages of transforming the two block surface parking lot in the southwest corner of Laclede's Landing adjacent to Eads Bridge and Third Street. The site has been discussed as the location of a parking garage if it is determined one is needed to replace the North Arch Garage. CityArchRiver plans to demolish the Arch garage as part of the revamp of the grounds.

The Drury proposal is considering a residential tower in the southwest corner bordered by Eads Bridge, Second Street, Lucas Avenue and Third Street, with an attached two-level parking structure and a separate parking structure at the block just north bordered by Morgan Street Brewery, Second Street, Lucas Avenue and Third Street. The new parking structure could consolidate parking for Bi-State (Metro), Abstrakt Marketing Group and Landshire employees, who currently use the Arch garage and scattered surface lots. Metro is currently considering moving out of Laclede's Landing.

The parking study related to the Arch grounds project (below) concluded that additional parking capacity is not needed for the Arch grounds. A re-oriented underground Museum of Westward Expansion will have a new western entrance, closer to the existing (and underutilized) Kiener and Ballpark East parking garages that the North Arch Garage is to today's museum entrance.

A few challenges remain for the development plan, including concerns about traffic flow and the MoDOT and City Streets Department rework of area streets. Drury and Lawrence Group met with the City last week to forward this proposal for considering. It's expected that the city will support the proposal. 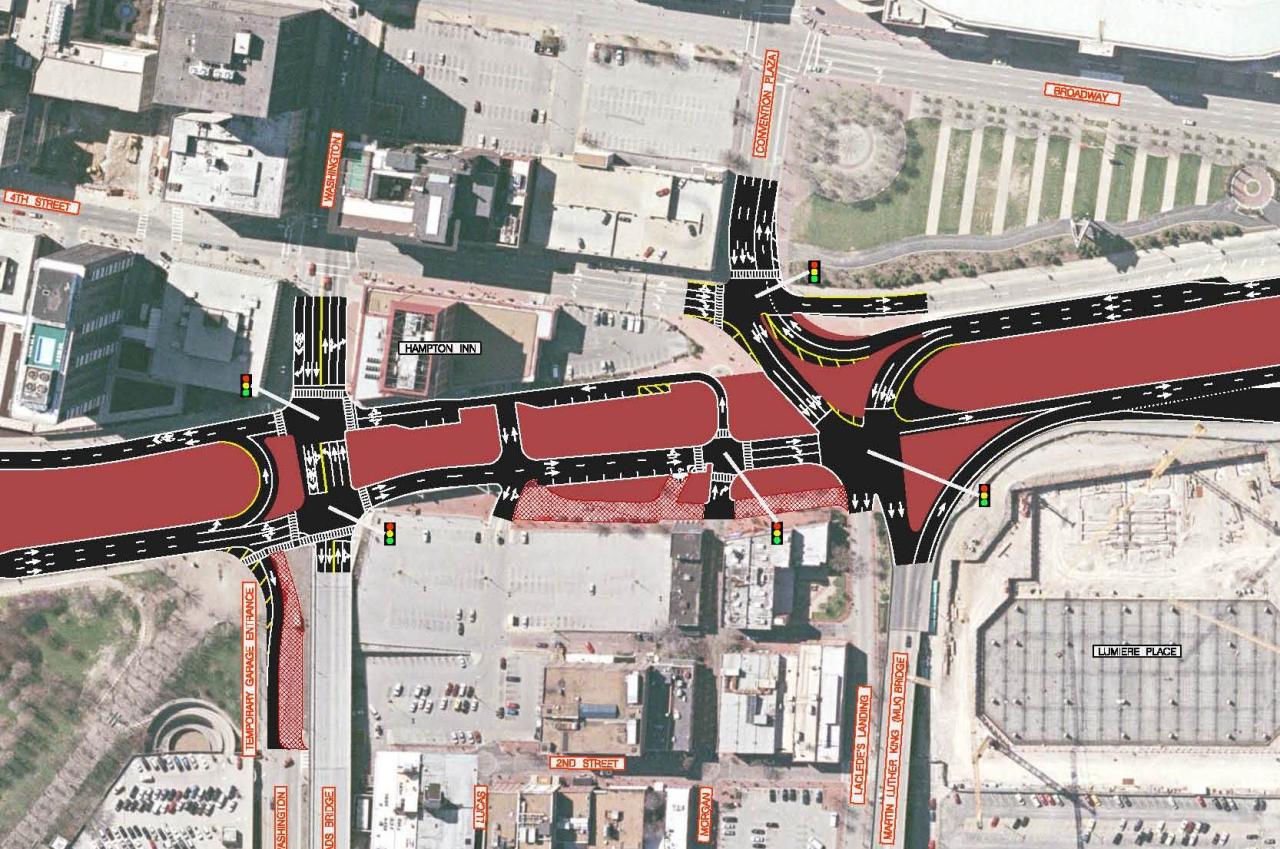 While access would come from a reworked Third Street, the building would stare directly at the elevated lanes of Interstate 70. The 1.4-mile stretch of I-70 from the Poplar Street Bridge to the new Mississippi River Bridge (MRB) has been targeted for removal by City to River, a citizen group advocating for better connections between St. Louis City and the Mississippi River (I serve as a member of this group). The Drury proposal would clearly benefit from, and may anticipate the conversion of elevated I-70 (from Washington Avenue to the new MRB) to an urban boulevard.

It's unclear what guidelines or restrictions might in place to help shape the development. Laclede's Landing is not a local historic district, the designation that allows for strict community guidelines of rehab and development activity, such as the size and placement of windows, use of materials and more. While the Fifth Ward has opted out of the city's preservation review process, it's listing on the National Register of Historic Places does trigger demolition review. There is no form-based code overlay for the district. Absent prescriptive regulations, Laclede's Landing is clearly historic and there will be pressure for any new development to be context sensitive. 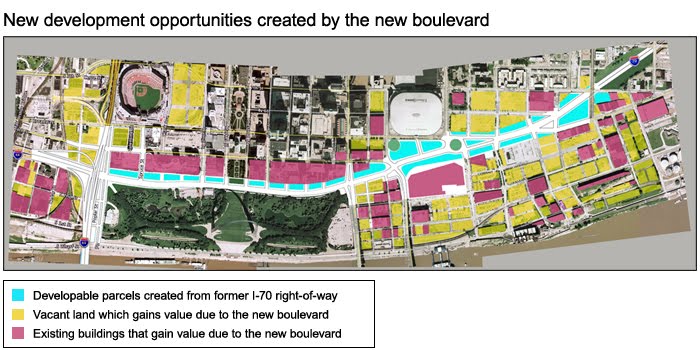