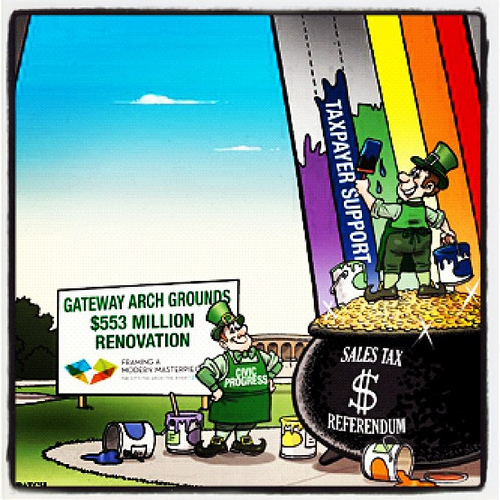 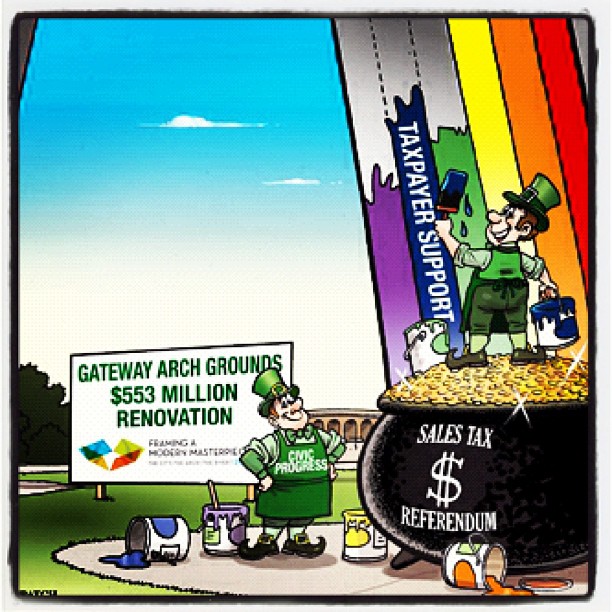 In the recent Post-Dispatch editorial Yes on Prop P. Arch-parks-trails tax fixes old problems, creates new opportunities, the following appeared, “Mr. Ihnen said he believes that “95 percent of this (Prop P) is a good idea,” but regrets that the Arch project will involve closing three blocks of Memorial Drive.” This is false. Set aside the issue of how this doesn’t make sense on a basic level (How does one support 95 percent of a tax increase? Would that mean I support a 0.178125% sales tax for parks?).

What I have said, and did relay to the Post-Dispatch Editorial Board, is that I support 95% of the design elements planned by CityArchRiver. These include proposals to raise Leonor K. Sullivan Boulevard to keep it dry for the majority of the year, new ADA accessible paths, a revamped Old Courthouse, a new Kiener Plaza, reconstruction of the retaining ponds, the eventual replacement of the Ash trees, expansion of the underground museum, and so forth. That couldn’t be more different than how the PD editorial portrayed my stance.

What I have brought into question is the design process, several specific design elements, (complete lack of) community engagement, and financing. More substantive public engagement should have been required from the start, but specifically regarding Prop P, at the point when it was determined more than half a billion dollars of taxpayer money would be sought, a new conversation was necessary.

This is why I’ve questioned the process followed for this project. This is why I’ve looked at the impact of the various silver bullet projects that dot our city, while people and jobs continue to leave. This is why I’ve asked what drives visitor attendance to the Arch grounds. I do not support 95 percent of Prop P. I don’t support 1% of Prop P. I would not support Prop P on a train or in the rain… you get the idea. What I would support are separate votes on taxpayer support for St. Louis County Parks, City of St. Louis Parks, Great Rivers Greenway and the Jefferson National Expansion Memorial.

For the Post-Dispatch to so badly misrepresent my clear and long held position on Prop P, while endorsing a “yes” vote, is ridiculous. To claim an opponent of the measure supports 95 percent of it, falsely proposed that there are no legitimate opponents of the measure. It minimizes my work and the legitimacy of the questions we need to be asking.