A central question in the ongoing Rams stadium lease drams, is just what type of stadium owner Stan Kroenke wants. It's often said that he admires Robert Kraft, owner of the New England Patriots and builder of Patriot Place, a suburban stadium with attached shopping center, healthcare facilities and more. Kroenke is a real estate developer, in case you didn't know. Wouldn't a St. Louis Foxboro be attractive to him? Afterall, we have several possible locations (see Fenton Chrysler plant overlay below).

It's also been said that he likes the Colt's Lucas Oil Stadium, which sits adjacent to the Indianapolis Central Business District (CBD) and covention center. The Edward Jones Dome occupies a very similar setting here. So would he want to renovate it? Maybe built on the Bottle District site? All's quiet from the city's Convention and Visitor's Commission (owner of the dome) and the Rams, so why not take a glance at where NFL stadiums are built.

The labels used are subjective, but of the 31 NFL stadiums, I count 12 suburban sites, 11 next to a city's CBD and eight more in an urban setting away from the CBD. It's a fairly even split. But looking over time, tastes for sites have changed. Starting in 1975 with the Superdome in New Orleans and ending in 2002 with Ford Field in Detroit, 10 of 15 stadiums build were located in a CBD. It seemed to be the default site wherever practical. Since then, five of the seven stadiums built have been in a suburban location. In all, 19 NFL stadiums have been built since the Edward Jones Dome opened in 1995 and at least two more (San Francisco and Minneapolis) will be added to that total soon.

So does the recent suburban trend point towards a Rams stadium outside the city? With Superbowls seemingly not showing a preference for CBD settings to this point, will the recent success of Indianapolis push cities toward more urban locations? 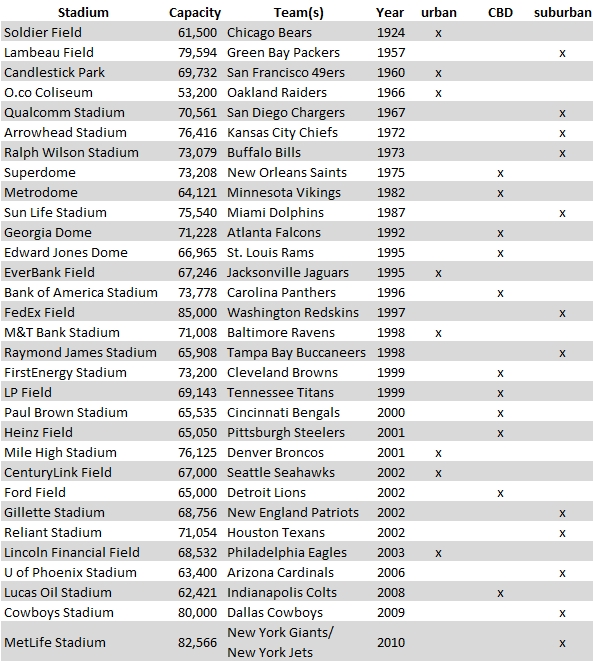