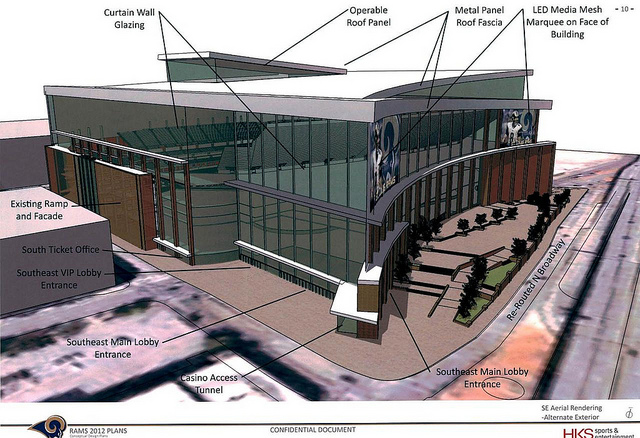 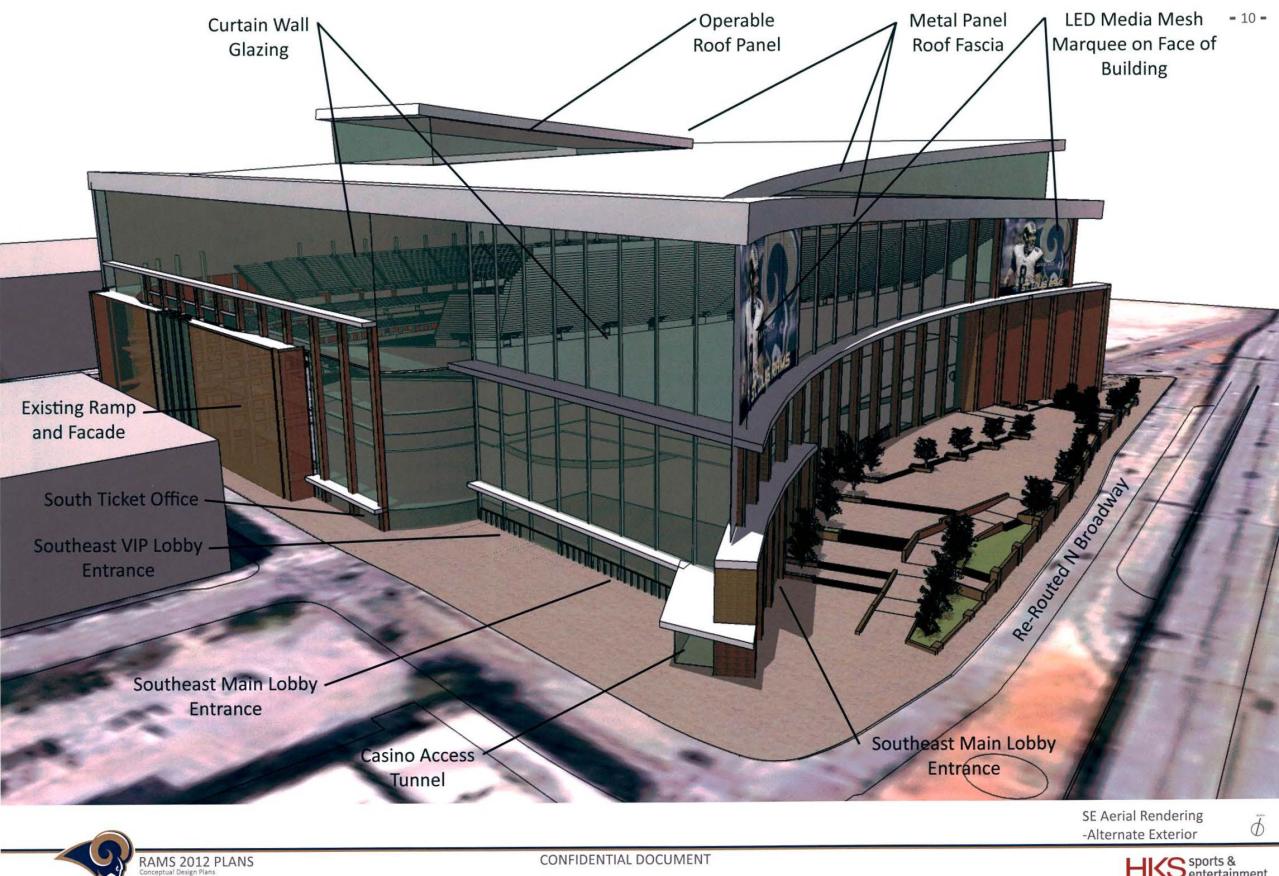 According to nextSTL.com sources, the arbitration panel tasked with plotting a future path to a "Top-Tier" stadium for the St. Louis Rams has ruled in favor of the team's ~$700M stadium proposal. The panel could have ruled for the CVC's $120M proposal, or crafted a compromise. The St. Louis CVC has 30 days to decide whether to accept the arbitration panel's decision and seek a funding source for upgrades, or to reject the decision. If rejected, the Rams could break their lease as early as spring 2015. If the panel had ruled in favor of the CVC, the Rams lease would have remained in effect until 2025.

While the ruling will lead many to begin counting the Rams' remaining days in St. Louis, look for all parties to get to work in an attempt to indentify funding sources. Recent stadium renovations and new construction in the NFL have been aided by substantial funds from owners as well as the NFL and its new "G4" loan pool. An outline to reach something close to $700M could include $150-$250M in state and local funding with the remaining amount coming from owner Stan Kroenke and the NFL. 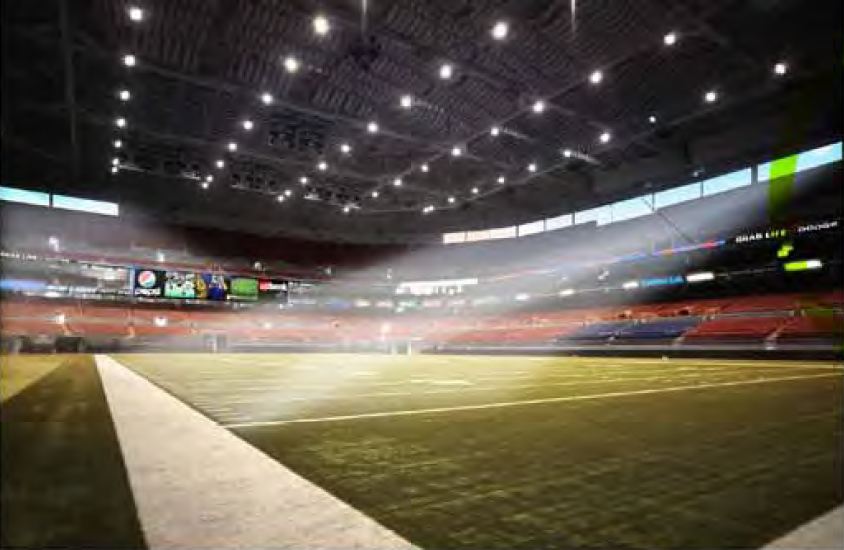 {the CVC's vision for natural light was a far cry from that of the Rams, and the arbitration panel}

In effect, the CVC had argued that an array of changes, from updated luxury suites to a little natural light introduced to the dome would satisfy the "Top-Tier" language in the Rams' lease. The Rams argued that "Top-Tier" in today's NFL means significantly more space for seating, concessions, luxury suites, a retractable roof, and much more. This is the argument the Rams won. The "Top-Tier" status requires that the dome be in the top 25 percent of NFL stadiums based on 15 measures. The decision cited the stadium's small footprint as one factor keeping the facility from "Top-Tier" status. The Rams proposal suggests closing a portion of North Broadway and expanding the stadium to the east.

Ultimately, one of two things will happen: the Rams stay or the Rams go. If they go, and the likely destination would be Los Angeles, though San Antonio and a couple others cities are possibilities, there's not much to talk about. The dome would be used for conventions, as it is sometimes now, outside the NFL season. The City of St. Louis and St. Louis County would continue to pay $6M each year on dome debt and the state would continue its $12M per year payment. The total pay off, ending in 2025 would be $720M.

The other scenario is that the Rams stay. What's clear from today's arbitration ruling is that the team will not be playing in the existing dome, not even with a couple hundred million dollars of renovation. A reconstructed dome, similar to the Rams' $700M proposal would work, the Rams could play at Faurot Field in Columbia, as the Bears played in Champaign during the reconstruction of Soldier Field. Lastly, a new stadium could be built.

{Patriot Place superimposed on the former Chrysler plant in suburban Fenton, MO – one of several possible locations around St. Louis where a new stadium could be constructed}

The CVC is expected to reject the arbitration result. What happens next is more negotiation. The Rams must give one year notice of intent to end the lease (as early as Spring 2015). However, even if Kroenke were motivated to move the team, no city would be ready with a new stadium by that time. Maybe the Rams could play in the Alamodome, but it's older than their current home.

After seven seasons with an NFL team, the Rams moved to St. Louis in 1995. Then-mayor Freeman Bosley, Sr. has explained the not-so-favorable lease terms agreed to by the city by simply stating, "We weren't negotiating from a position of strength." St. Louis badly wanted a team. Since the league left Los Angeles, no city has been negotiating from a position of strength. The threat has always existed that a team could pack up and move to the nation's second-largest television market if they didn't receive the stadium they wanted. Today, one only need to look at the Dodgers $8B, 25-year television deal with Time Warner to understand the allure of the City of Angels.

Nearly every NFL team has leveraged the league's absence in Los Angeles into greater tax payer subsidy for new or renovated stadiums. Over those 17 years, 28 of 32 franchises have built new stadiums or made significant renovations to their existing home. With deals in place for both Minnesota and San Francisco, it's 30 of 32. Leaving Los Angeles without a team has been the best business decision the league has ever made, at great cost to cities and taxpayers. Communities have rallied time and again to find $200M, $400M and more to keep their franchises. 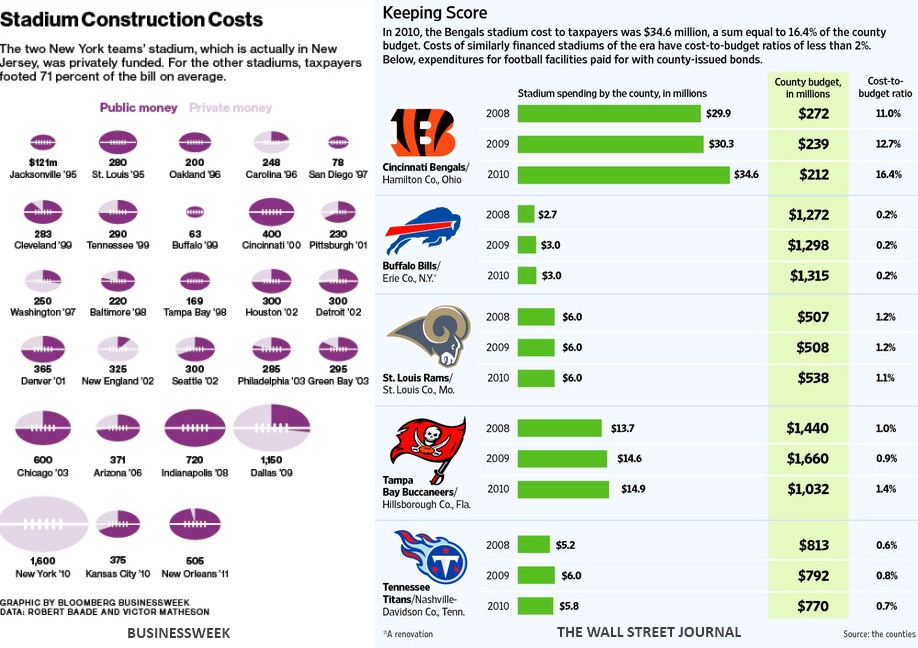 In "the worst stadium financing deal ever", Hamilton County, OH (equivalent to St. Louis City and County combined) fully financed the Bengals Paul Brown Stadium. Today, stadium debt costs consume 16.4% of the county budget, $36.4M in 2010. St. Louis city and county pay a relatively smaller $12M each year. By how much, and by what means, might the region be willing to up the ante?

Indianapolis provides one encompassing example. The team put up $100M for the $720M stadium, while the remaining $620M (86%) is being funded by taxpayers. Marion County (synonymous with Indianapolis) raised taxes on food and beverages, rental cars, hotels and ticket sales. Seven of the eight surrounding counties in the metro area added a 1% food and beverage tax. In Minnesota, the state legislature approved $348M to support a new Vikings stadium.

But St. Louis is not speaking with one voice and Missouri is not likely to be as generous. The CVC's public position is that they are dedicated to having the Rams stay in a renovated Edward Jones Dome "with improvements to the facility that make sense to the Rams ownership and our community." Jeff Rainford, Chief of Staff to St. Louis Mayor Francis Slay, has publicly and vocally stated that the NFL doesn't belong downtown. "Hopefully this moves us to where the Rams can play somewhere else in St. Louis." The main objection: The blackout imposed by the NFL season on use of the dome for conventions costs the city convention business. Other cities understand this too. While the Colts' Lucas Oil Stadium remained downtown, it was separated from a then expanded convention center.

To use a round number, let's assume a new stadium would cost $1B. Could the state and region double its current commitment from $24M each year to $48M? That could get the project off to a good start. Add 50% of the cost from the Rams and an NFL G4 loan, some other job creation incentives, tax abatements (say, on 295 acres in Fenton), the whole shebang, and you're close.

The region's political and civic leaders clearly believe there's taxpayer money waiting to be tapped. This spring, voters in the city and county will vote on a 3/16% sales tax increase to fund the Arch grounds and local parks. That revenue would amount to an estimated $6.2M per year in the city and $24.9M per year in the county. This would be very close to funding the public side of a 50/50 $1B stadium deal. And that's without any state money. Both Rainford, and St. Louis County Executive Charlie Dooley have stated that any new taxes would need approval from voters. Will local leaders fight for a stadium deal? Have they decided that parks are a better investment, a higher priority? If put to the voters at the same time, which would win? After all, the Rams may move, the Arch isn't going anywhere. Voters may not get that option, but the stadium issue will likely be on their minds when considering the Arch/parks tax.

That's the numbers game, but there's more to it than that. A profile of Ram's owner Stan Kroenke on 101Sports.com makes for very convincing reading. Stan's a Missouri guy, born and bred. He was the lead investor in a failed attempt to land an NFL expansion team in St. Louis after the Cardinals left. He bought a minority interest in the Los Angeles Rams on the condition that they move to St. Louis. Ownership groups in Los Angeles want to own a team. Kroenke has never sold any portion of his NBA, MLS or NHL franchises. It's estimated that Kroenke's wealth grew from $6.1B in 2010 to $8.5B in 2012. All of this points to the Rams staying. But Stan is a business man, people shout, and unfortunately for Kroenke, St. Louis and Missouri appear unlikely to show him the money.

The arbitration panel ruled in favor of this proposal from the Rams:

Full coverage of the CVC and Rams proposals on nextSTL: