Following who is in charge of what among the plans for the Arch grounds revitalization has been tougher than keeping your eyes on the baseball under the caps on the big screen at Busch Stadium after a couple 30oz Budweisers. In short, the National Park Service (NPS) has said thanks, but no thanks on comments regarding I-70 and other elements (all beyond the park boundary). MoDOT has said they're serving their client, the City of St. Louis and that alternatives do not meet the goals of CityArchRiver. The City says that the CityArchRiver2015 Foundation is at the design controls. CityArchRiver doesn't say much. (There's a nice (snarky) Venn diagram at the end to illustrate how this works.)

This byzantine morass prevents any holistic discussion of the project by the public. And so here we focus on the NPS Environmental Assessment for Implementing CityArchRiver Initiative Elements. As a federal agency, the NPS is required to publish for public comment changes being considered to the Arch grounds. One alternative is required to be "no action". Taken in this context, the maximum change option outlined below should be sought by the NPS in nearly all aspects of the project.

The depth of existing challenges and need for substantial investment in the Arch grounds has be obvious for many years. In fact, the park has been substantially neglected and underdeveloped since, well since it was conceived of nearing a century ago. The NPS failed to update the park's General Management Plan for decades. CityArchRiver, and the city, eventually stepped in to force change. The options considered by the NPS below are designed by Michael Van Valkenburgh and Associates, the winners of the Framing a Modern Masterpiece competition.

The options being considered by the National Park Service:

West Gateway: The "lid" is happening as a MoDOT project. Should Smith Square be expanded and re-invisioned? Should a new west-facing museum entrance be built into the existing berm east of I-70?

The Visitor Center/Museum: Should the existing facility be renovated and updated? Should it be expanded by 35,000-50,000 square feet and ticketing/ingress be moved to a new west-facing entrance while existing access at north and south legs be exclusively for egress? 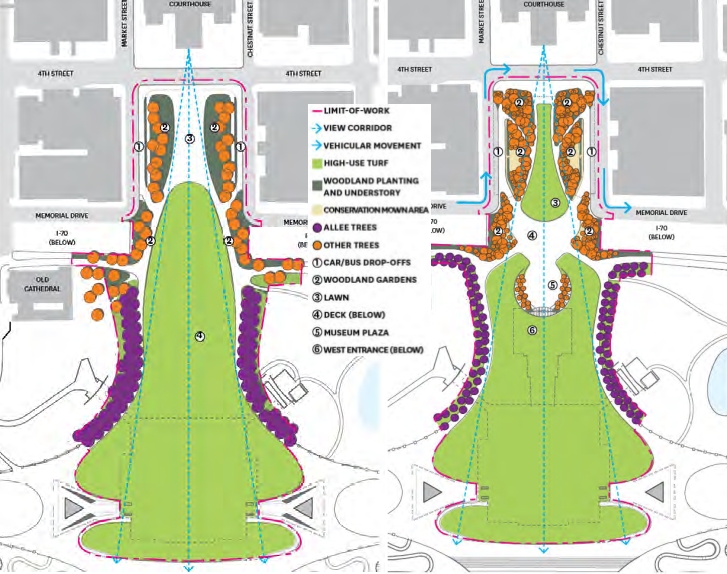 North Gateway: Washington Avenue east of I-70 will not be accessible from Washington Avenue west of I-70 as a result of the MoDOT project. Should the existing parking garage be retained? Should aesthetic changes be made to the garage? Should the garage be demolished and replaced with a "discovery garden" after a holistic parking strategy for the Arch grounds is implemented? 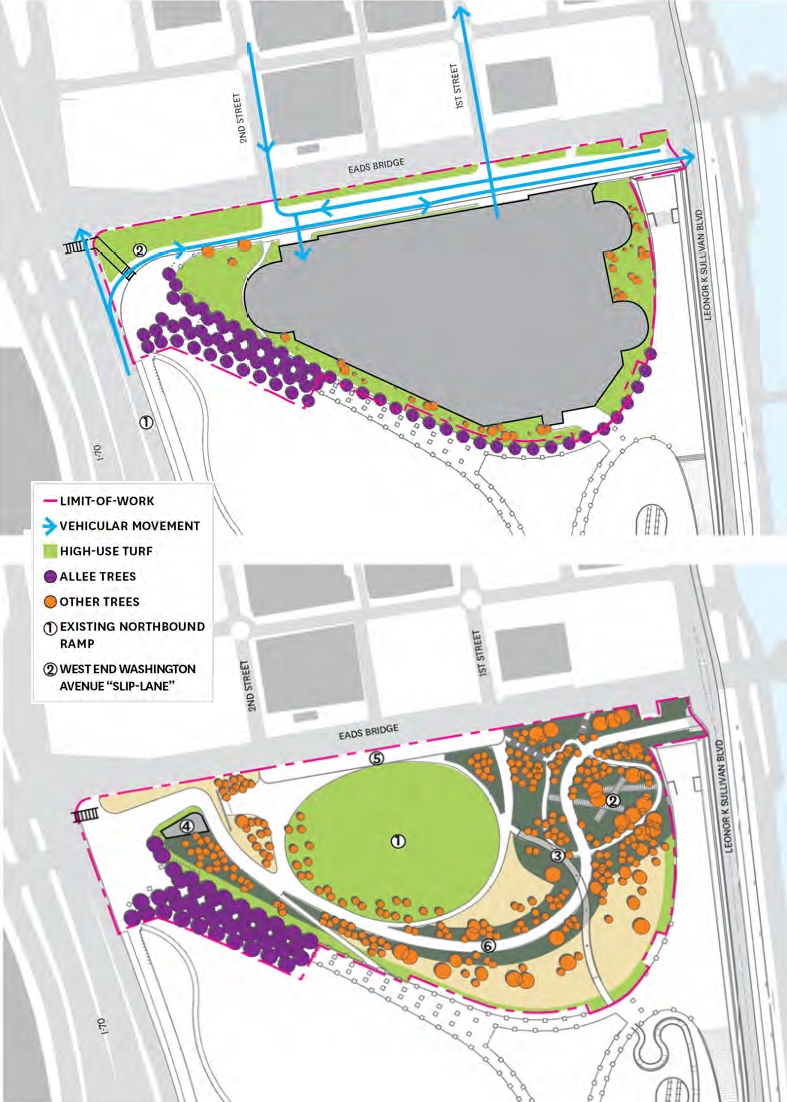 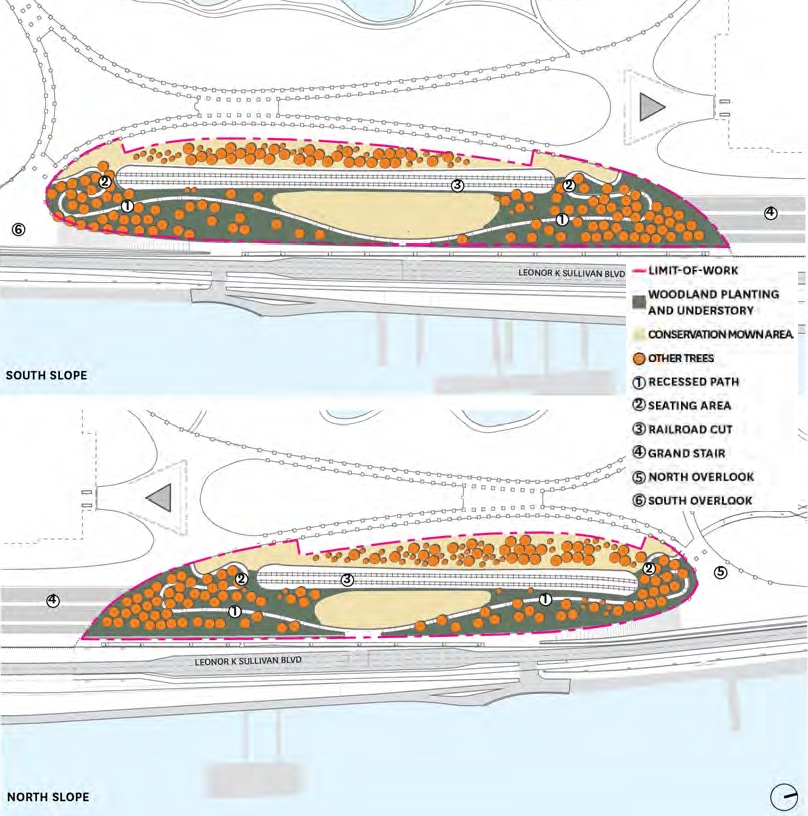 Reflecting Ponds: Should they be left as is? Should mowed grass accessible paths be added? Should storm water swales and new runoff management system be installed? 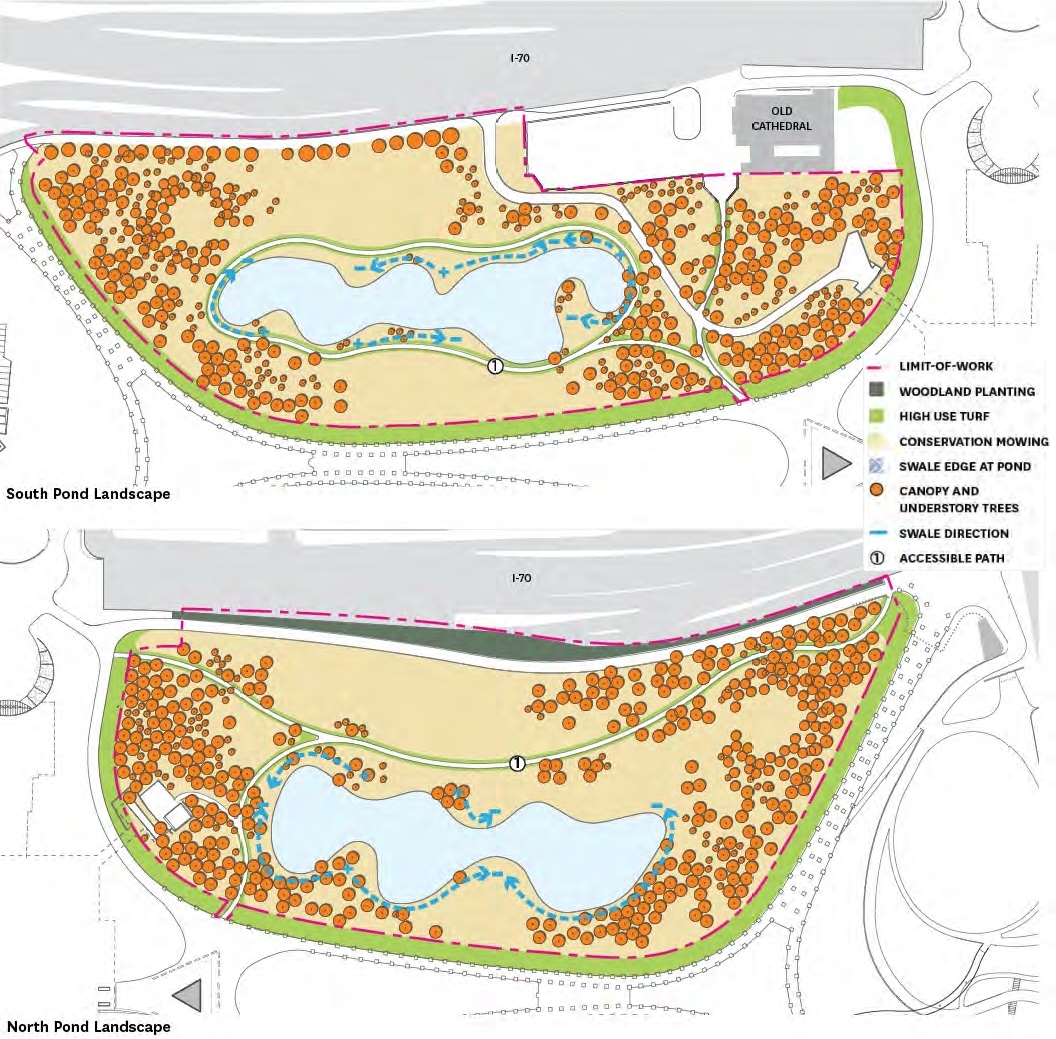 Processional Walks: Should existing walks be maintained and ash trees replaced? Should subsurface soil conditions, irrigation and drainage systems be improved and replaced? Should the aggregate surface be replaced?

Old Courthouse: Should the courthouse remain unchanged? Should galleries be renovated and expanded on the first and second floors, surrounding streetscape improved and accessibility added?

Central Riverfront: Should Wharf Street be raised from Chouteau Avenue to Biddle Street? Should a two-way bike path be added and the street narrowed? Should a raised pedestrian crossing and bus drop-off/pick-up lanes be added?

Security: Should a continuous secure perimeter of bollards be installed with visitor screening remaining at north and south entrances? Should a shared bicycle path serve as perimeter security at the North Gateway and visitor screening take place at a new west-facing entrance?

Accessibility: Should selective re-grading and secondary paths be added? Should north and south entrances and the Old Courthouse see accessibility enhancements? Should an elevated accessible walkway be added at the North Gateway? Should an accessible path be added to the previous Washington Avenue area? A new west-facing museum entrance would be accessible.

Topography and Grading: Should Smith Square be re-graded? Should the northwest corner be re-graded to improve accessibility? Should the berm be altered for a new museum entrance, the North Gateway re-graded after demolition of the parking garage and explorer's garden and additional paths be added? 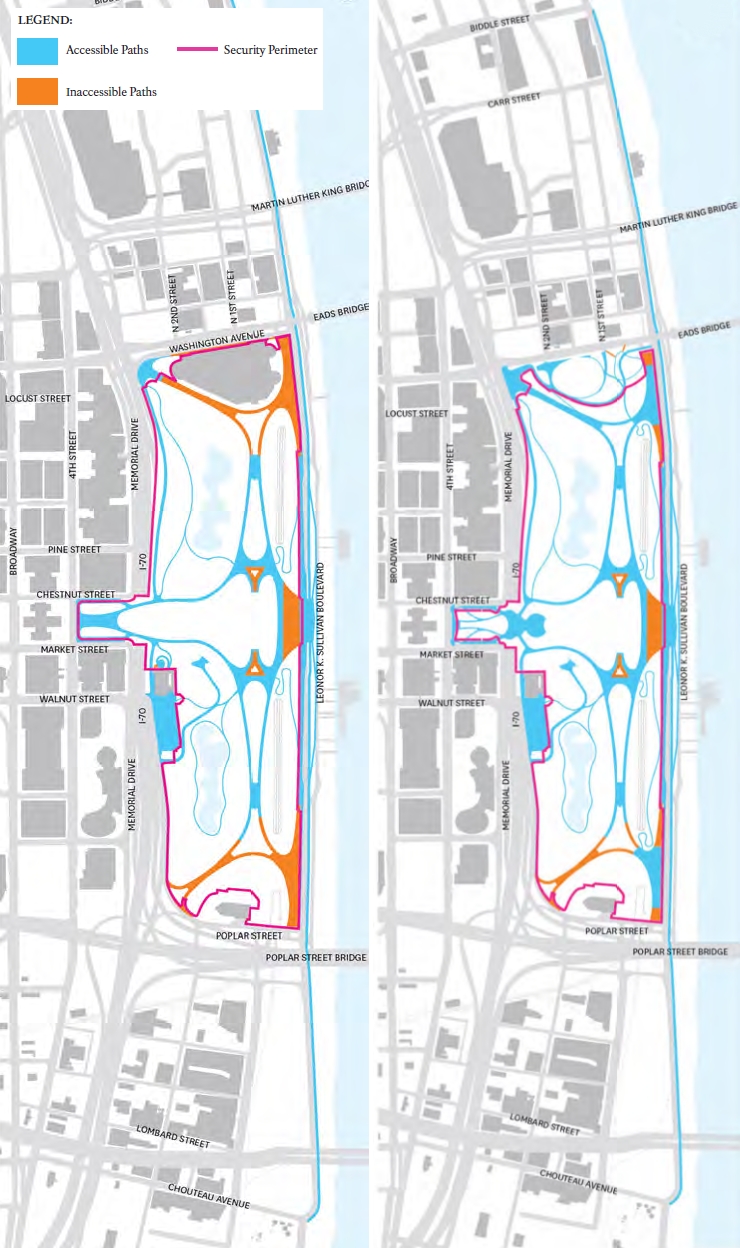 Parking: Should the north garage be maintained? Should the garage be demolished after a holistic parking strategy for the Arch grounds is implemented?

Planting: Should this remain unchanged? Should plantings follow the original intent, be compatible with the historic landscape and use sustainable management practices? Should additional plantings that do not interfere with sightlines be added? Should new plantings be introduced at a west-facing museum entrance and a North Gateway discovery garden? 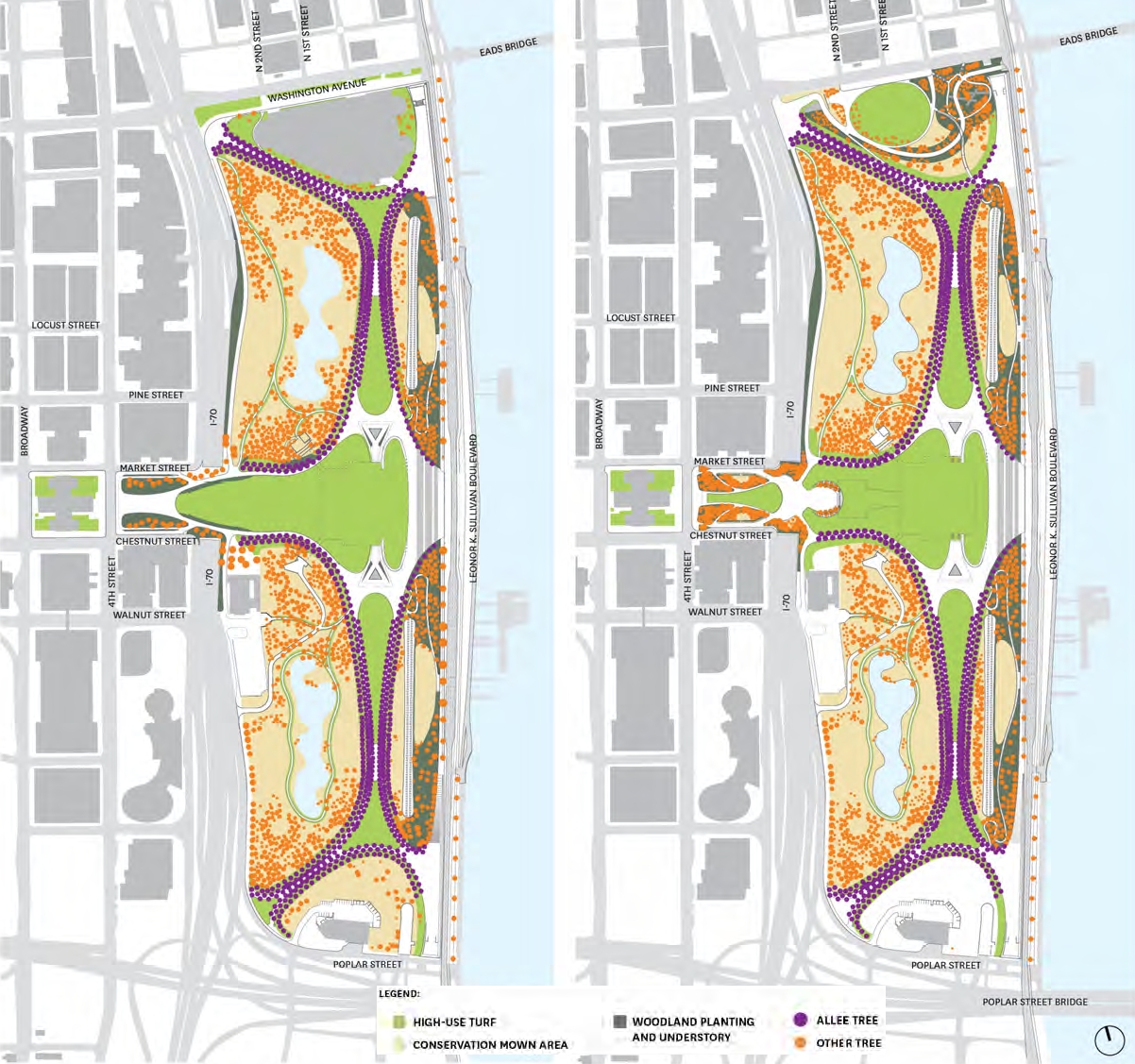 So which alternatives should the NPS support? West Gateway: with the “lid” a fait accompli, a new western museum entrance makes a lot of sense. It would make sense without the lid as well, but a lid without a new entrance would be a missed opportunity. The Visitor Center/Museum: with a new entrance this would be expanded. Updating displays and programming would be great. East Slopes: add the four winding paths. Reflecting Ponds and Processional Walks: fix them. Old Courthouse: go big. Central Riverfront: raise it and implement multi-use strategy. Security: whatever works. Accessibility: more is better. Topography and Grading: whatever works. Planting: sure.

That was easy. Of course, parking and the north gateway aren’t so easy. The challenge is that the space occupied by the existing garage is the one place the NPS will allow dramatic change. The discovery garden and additional paths could be exciting. However, they come at a great cost and the case for more parkland isn’t clear. But again, within the context of the MoDOT plans, the north parking garage might as well go. Washington Avenue will become a “slip lane” off of an I-70 exit ramp. The public can comment via this online form until March 1, 2013. The NPS will hold a public open house on January 29, 2013 from 4:00-7:00 p.m. at the Old Courthouse downtown. For what it’s worth, the only program that makes sense for the NPS is the “Maximum Change” alternative. 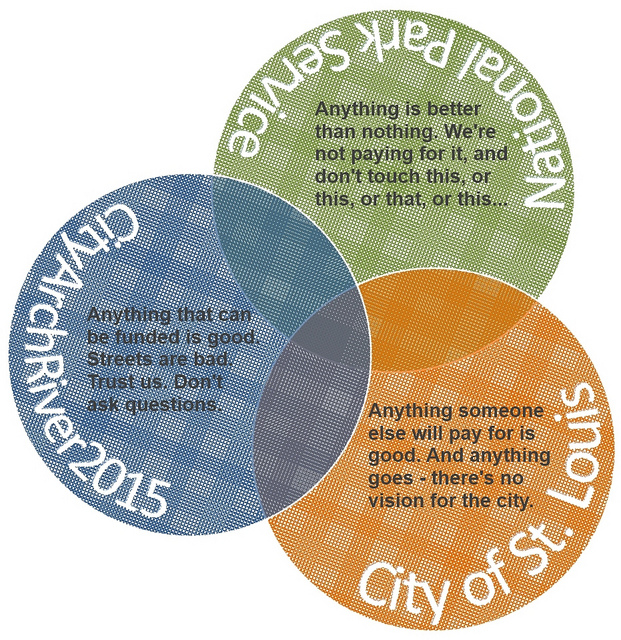