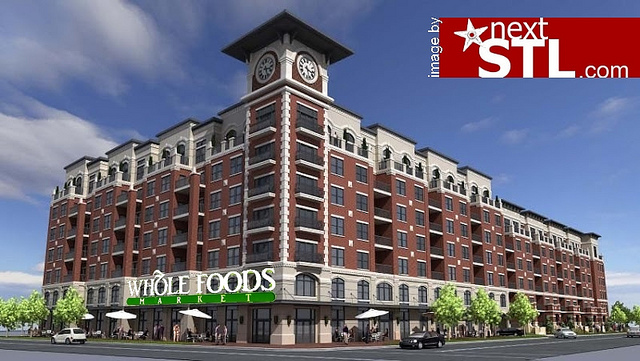 In August, nextSTL reported on efforts to bring a Whole Foods Market to the long vacant lot at Euclid and West Pine in the city's Central West End neighborhood. The project now appears to be moving forward, with developer Bruce Mills announcing that the grocery chain has signed a letter of intent. The site was the location of the Doctor's Building until 2008, when it was demolished. The latest City Walk proposal is for a 6-story building with 159 rental apartments, 6,100 sq ft of community space (fitness center, club house, cafe and lounge), and 393 parking spaces (up from 312 in 2009) in a garage conceled from street view. The rendering above, from the 2009 proposal shows a seventh story on the half of the project nearest Euclid, but otherwise still appears to accurately reflect the current design.

At 30,000 square feet, the Central West End store will be very close to the same size as the 34,000 square foot Brentwood location. It appears that the grocer will be on one level despite previous planning drawings showing a two-level retail space. The lot measures 1.65 acres, or just more than 70,000 square feet. The store will occupy the first level of the western half of the development. The $60M mixed-use project is set to receive $10M in Tax Increment Financing. The Straub's grocer at Maryland and Kingshighway since 1947 is approximately 10,000 square feet. {the future site of Whole Foods and City Walk is a 1.65 acre vacant lot – center-right}

Why could a Whole Foods be important to the Central West End and the city? When someone asks if you can live car-free in St. Louis, the basic answer is "no". Now there will be a better answer. The neighborhood is certainly almost there already with a public library branch, dry cleaners, pharmacies, restaurants, movie theater, etc. The missing element has been a grocer that met resident's needs and expectation. As a former resident of the neighborhood, I can say that the Lindell Shnucks location and Straubs work well for some things some times, but larger shopping trips were always made to Richmond Heights or Brentwood.

It's tempting to scoff at the idea that a great urban neighborhood needs validation from a $9B revenue retail behemoth, but that doesn't make it less true. The presence of a Whole Foods will change the image of the neighborhood for many and for those relocating to St. Louis, the store is nothing less than a beacon screaming, "move here, it's mainstream, even fashoinable!" Whole Foods is vouching for the Central West End.

It's also true that the entire neighborhood isn't great (or built out). North of Lindell is a nearly intact five block stretch of corner shops, retail bays and historic homes. The block and a half north from Forest Park Avenue and the medical center shines as well, but the space in between carries little of the vibrancy and none of the charm of the rest of Euclid.

Back to my own experience: Knowing I would be moving to the city soon, I spent three days driving around St. Louis in the spring of 2002. There was a lot to like, but very little that I recognized. It wasn't obvious where the (or any) main commercial strip existed. Frankly, a Whole Foods would have changed that perception. Understanding that some dislike Whole Foods, some may fear its impact on other businesses and many are indifferent, it remains undeniable that it will change the image of the city and the Central West End to others.

The four corners of West Pine and Euclid: {SW corner – retail space has remained vacant for a decade} Salon recently glossed up the "Whole Foods Effect", in a May article, Whole Foods is coming? Time to buy. The Post-Dispatch push that narrative, stating, "a decision by Whole Foods to open a grocery can signal that the chosen neighborhood has crossed a threshold of affluence and desirability." From the Salon article:

The company is so good at the real-estate game that it has spawned a catchphrase, the Whole Foods Effect…Whether the Whole Foods Effect is real, or the company is just extremely good at slipping into areas that would have gone upscale anyway, has never been directly quantified. But evidence suggests that Whole Foods can accelerate gentrification in particular ways. A new Whole Foods may not cause property values to shoot up on its own, but it can set into motion a series of events that change neighborhoods.

The claim of the "Whole Foods Effect" in particularly interesting in the context of the Central West End. In St. Louis, it's known as THE gentrified neighborhood, multi-million dollar mansions on private streets, rehabbed 1BR $500,000 condos, the tallest residential highrise building in the region in recent years, a seemingly ever-expanding population of researchers, post-docs and others employed at the adjacent medical campus, a world-class chess center… The Central West End is frankly THE city neighborhood already.

What does it say that Whole Foods in moving in? What will the effect be? For all the affection St. Louisans have for the neighborhood, there are a number of large vacant lots within a block of the West Pine-Euclid intersection. Perhaps for St. Louis, the Central West End is the place to be, but there is incredible potential for more development. A new form-based code dictates dense development in this part of the neighborhood (between Lindell and Forest Park Avenue).

This is why nextSTL has advocated for any central corridor streetcar line to run on Lindell in the Central West End. Now, having a line within one block of a Whole Foods makes even more sense. Having a national grocer, perhaps the national grocer opening in the neighborhood will have a significant affect. Back to the Salon story:

But it’s not just what Whole Foods signifies — it’s the evidence of success that it generates. “Before a Whole Foods goes in, if there’s not much private investment in that district, there’s no data for developers to look at,” says Bill Reid (a principal at the Portland, Ore., land-use consultancy Johnson Reid). A publicly traded behemoth is a data-generating machine. “You can go to their annual report and see how many customers they’re getting, how much traffic,” which lures other potential developers. And those other developers can bring Whole Foods’ numbers to a lender to get a loan. “To a lender and a developer, those are bankable numbers,” says Reid. “They’re as good as gold for a business.”

We know the Central West End as a great urban neighborhood. It may just take having a Whole Foods open to get banks and developers to realize the same and put a shovel in the ground. It's easy to imagine other projects coming online as this development gets started. The empty building at Lindell and Euclid, the surface parking along West Pine and Lindell west of Euclid, the empty storefront across the street. If you question the impact of a Whole Foods, just watch. This development marks a significant leap forward for this corner of the city.