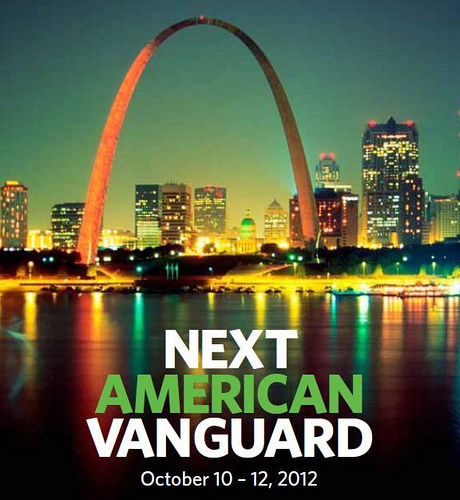 The Next American City 2012 Vanguard class will descend on St. Louis this week. Coming from 24 cities, this group of 43 individuals will be in town this week along with past members of the Vanguard for workshops, tours and panel discussions about how to improve American cities. I'm incredibly grateful to have been named a member of this year's Vanguard class. Past members in St. Louis include Michael Allen and Jeff and Randy Vines (members of this year's host committee). A full list of the 2012 Next American City Vanguard class is below.

Looking ahead to the events in St. Louis, Next American City has featured items by Michael and Tim Logan of the St. Louis Post-Dispatch. Starbucks in a Flying Saucer: St. Louis Preservationists Embrace Modernism highlights the successful effort to get the Midtown building's owner and the city to value the unique landmark, as well as the apparently successful effort to preserve the Modernist AAA building just a few blocks away. As he notes, "When developer Rick Yackey had Alderwoman Marlene Davis introduce a blighting bill that exempted the “flying saucer” from mandatory demolition review last June, he likely didn’t anticipate much attention."

Tim's excellent Free Fall: The Struggle to Keep Houses Standing in The Ville is a must read. "When you talk with preservationists who work in north St. Louis, you get the feeling that there’s a sort of slow-motion race going on. In one lane is the inexorable spiral of blight, in which a house is abandoned, then taken over by squatters or junkies until fire or weather or scavengers render it so badly damaged that there’s nothing to do but tear the thing down. In the other is a market that’s gradually shifting back toward older neighborhoods and historic homes, helped along with tools like the historic tax credit." 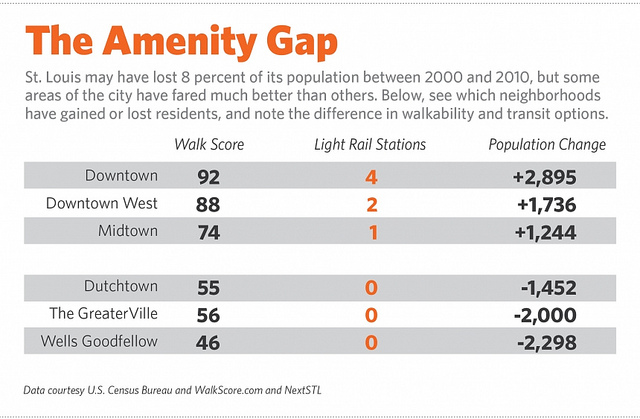 From Next American City: "More than ever, our Vanguard class works for robust private and non-profit organizations and government, rather than community development corporations. While many of our Vanguard class members work for large organizations, many got hooked on having an impact on their city with blogs and other local projects of their own. So we’re seeing a formalization of young urbanists, with new pathways toward influence."