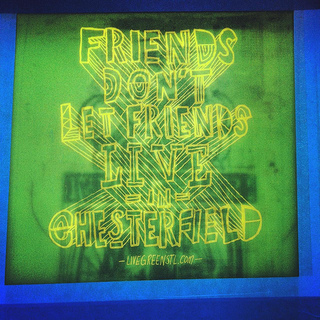 To promote its Botanical Grove development, urban developer UIC is poking a little fun at the second largest municipality in St. Louis County. Some are missing the humor. Online comments in response to the “Friends Don’t Let Friends Live in Chesterfield” slogan have ranged from claiming the slogan is a “misguided idea” of how to promote the city, to people listing the faults of the City of St. Louis (crime, shootings, traffic, drugs…), to people declaring the whole thing “irresponsible and divisive”. There’s even speculation that the whole thing might hurt the city. The reaction so far seems to dispell the assumption that Chesterfield “could take a little good natured ribbing”.

So why Chesterfield? It’s is a popular place to live. It’s just more than half the size of the City of St. Louis (31.5 sq mi to 61.9 sq mi) and is home to 47,484 residents, just less than 1/6 the number of the city. Over the past two decades, the St. Louis County municipality has grown from 38K to 47K residents, but that growth flatlined and perhaps even reversed in recent years as the past decade showed just 682 additional residents.

Chesterfield is the quinessential St. Louis suburb. Sure, there are land use issues, the flood plain development and competing outlet centers being built, a lack of walkable neighborhoods and the distance to regional cultural attractions, but it’s a nice safe place to live. If it weren’t, this wouldn’t be funny. If someone said, “friends don’t let friends live in Velda City” you would think, “where?” If it was Wellston, well it’s a bit downtrodden, nothing funny there.

For half a century, the “city” has been labled dangerous, dirty, scary, ugly and unsafe. It’s undoubtedly had problems, which continue in varying degrees today. The city has also remained a wonderful place for people to live throughout that entire time. While the population continues to decline (8% from 2000-2010), St. Louis is also becoming more affluent and witnessing investments in cultural amenities and residential development.

{front and back of promotional coaster by UIC}

Using well-known Chesterfield, a place where it’s safe to say the majority of St. Louis region residents find very little wrong, is humorous. Using an obscure municipality, or non-specific region wouldn’t have the same effect. I’ve heard suggestions from “friends don’t let friends live in St. Louis County” to “friends don’t let friends live west of I-270.” Well, neither of those are funny because they don’t provide any specific image. Using Chesterfield is funny because it’s basically not true. Chesterfield is a fine place to live.

If there’s a story here, it’s that someone is finding it profitable to promote the city. This slogan simply wouldn’t have appeared in the 1980s or 1990s. Today, however, there’s a critical mass of city supporters, whether in Old North, Downtown, Shaw, or The Grove. There’s a market for the city and UIC’s Botanical Grove development is selling. For those offended by the slogan, well, it’s not for you. That is, someone who truly thinks Chesterfield is flawless and the city irredeemably flawed isn’t going to buy a house in the city – thought they may just visit two of the area’s new businesses.

Later this year, co-owner of salumeria Salume Beddu, Ben Poremba, will open a wine bar and restaurant as part of UIC’s development, and across the street Simone Faure, exective pastry chef at the Ritz Carlton in Clayton, will open a patisserie called Chouquette. Then there’s the relocated and expanded City Garden Montessori school, the new bike lane on Tower Grove Avenue…yeah, the project’s not finished, but it’s coming along nicely. UIC has completed a number of significant projects in the city including a private home in Forest Park Southeast, the Climb So Ill climbing gym and now the Botanical Grove development. More can be found at Live Green STL.

In case you just don’t understand what UIC is doing here, the following is from the developer’s website:

This summer you should start seeing our “Friends Don’t Let Friends Live in Chesterfield” bar coaster and bumper stickers around town. Hey, Chesterfield is a comfortable place with an affluent population, great sales tax base, and high quality schools. It is St. Louis’s flagship suburb, so we thought they could take a little good natured ribbing.

The campaign is really not about Chesterfield, but what is on the flipside of the coasters: sustainable, walkable, vibrant, urban, neighborhoods. It is about a vision of our beloved central City growing into a marquee diverse urban environment, with an emphasis on green planning and design. The City of St. Louis offers exceptional walkable historic neighborhoods, exciting night life, unique shopping options, a strong downtown, and a growing base of educational opportunities for families.

UIC believes in the future of St. Louis and we have chosen to concentrate on making it better by focusing on creating green homes, schools, offices, and great destinations. As residents, employers, and parents we believe we need to have a little swagger about our City and an excitement about what is ahead.

So, if we offended you we apologize, but we also believe that our region will never be as great as it can be without a strong urban core. We are the fastest growing under-thirty city in the nation, by percentage, and this is a key indicator of where we are headed. A strong city, with residential, employment, and entertainment options for all is critical for the growth of the region. Maybe someday, we could even dream the impossible dream of consolidated regional government…