Race is a part of St. Louis politics. What effect race has on individual election cycles and contests is a gray area without an answer. For the August 7th, 2012 primary, the issue was front and center as Lacy Clay and Russ Carnahan faced off to be the Democratic nominee in a new Missouri 1st congressional district. 21st Ward Alderman Antonio French produced this graph showing Clay's percent of the vote in each City of St. Louis ward over the percent of the ward's black population. They very closely align, showing Clay dominating heavily black wards and garnering ~25% of the vote in wards with the largest percentage of white residents.

Clay's victory, and others, aided by high turnout in predominantly black wards (18.4% compared to 14% in predominantly white wards) led to a raw vote count advantage of nearly 1,000 ballots and was considered an impressive show of north side political strength. The longevity of this strength could be in jeopardy as the city continues to lose more black residents than white. In 2000 there were 25,600 more black residents than white in the city. That number dropped to 16,893 in 2010. And there are now more white voting-age residents in the city than black.

Of course, the Clay-Carnahan race spilled out into St. Louis County as well. The most closely contested city race of the cycle was that for the office of Treasurer. Vying for the post open for the first time since 1981, were two black (Tishaura Jones, Jeffrey Boyd) and two white (Fred Wessels, Brian Wahby) candidates. Per the 2010 Census, the City of St. Louis is evenly split when considering race at 44% white and 49% black residents. When considering residents of voting age, the numbers flip (49% white and 45% black), but remain close. So what happened across the city August 7th? Where did each candidate find, or fail to find, votes? What do we see when considering race and votes in St. Louis?

There are 28 wards in the City of St. Louis. Only one ward, the 25th, has a spread of less than 14% between voting age black and white residents. 13 wards have at least 14% more voting age black residents than white and 14 wards have at least 14% more white voting age residents than black. It's through this lens that we consider the graphs depicting votes in the citywide Treasurer's race. Wards are listed in numerical order at the bottom of several graphs. 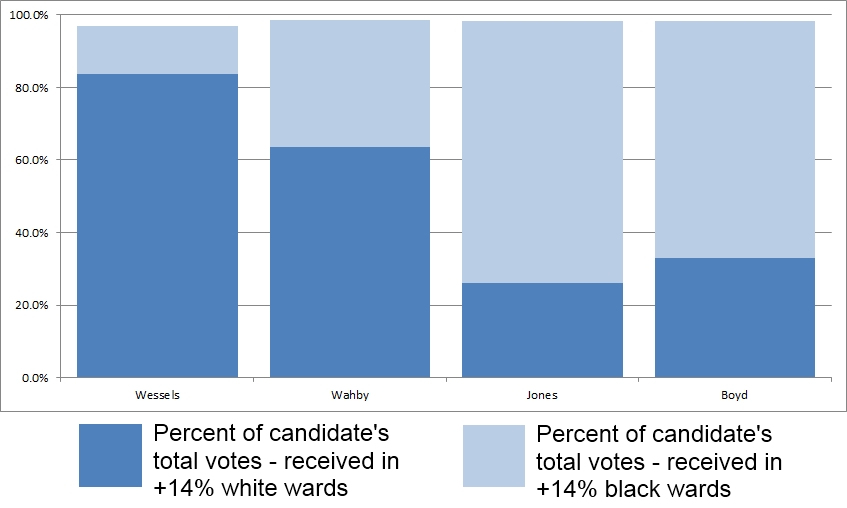 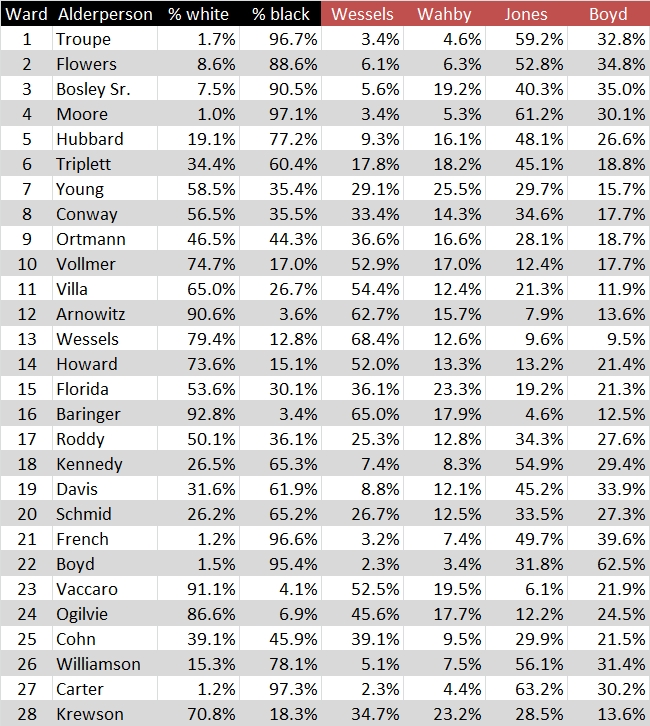