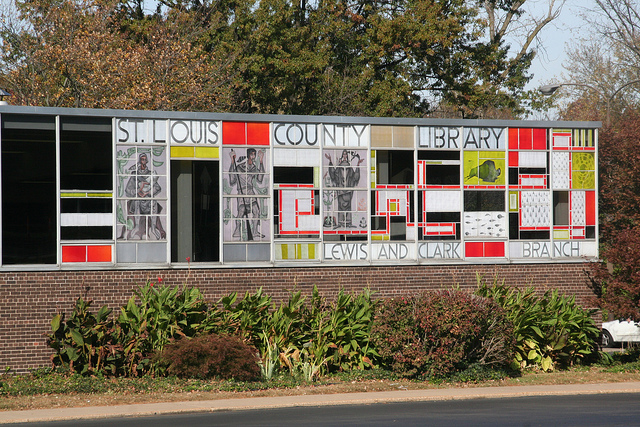 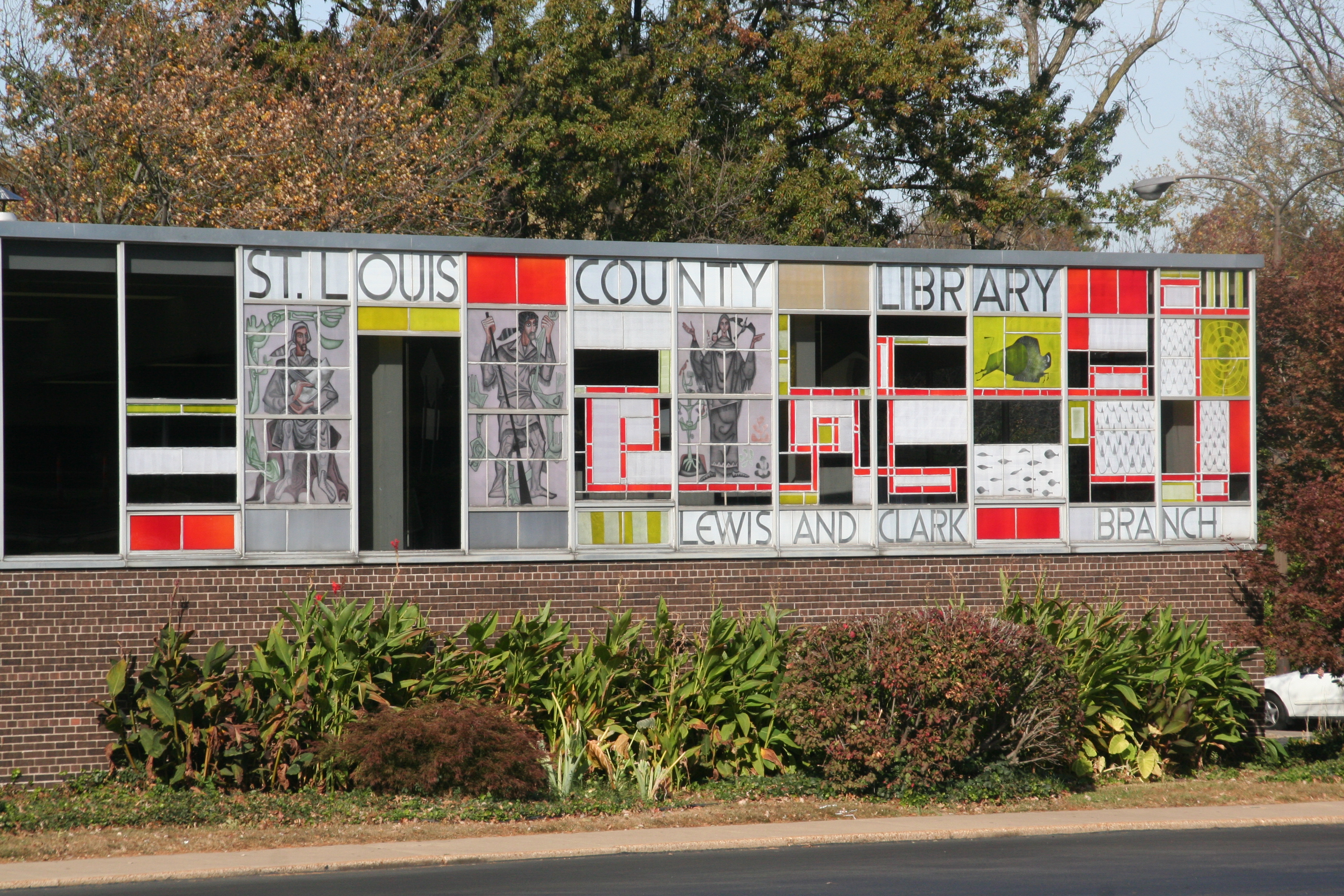 Of the twenty libraries in the St. Louis County Library (SLCL) system, Moline Acres’ Lewis & Clark Branch stands out for its exuberant modernist design and an architectural pedigree comparable to the finest mid-century buildings in the metropolitan area. Designed by prominent architect Frederick Dunn, FAIA, with Emil Frei Stained Glass windows by artist Robert Harmon, it was completed in 1963 at 9909 Lewis-Clark Boulevard. 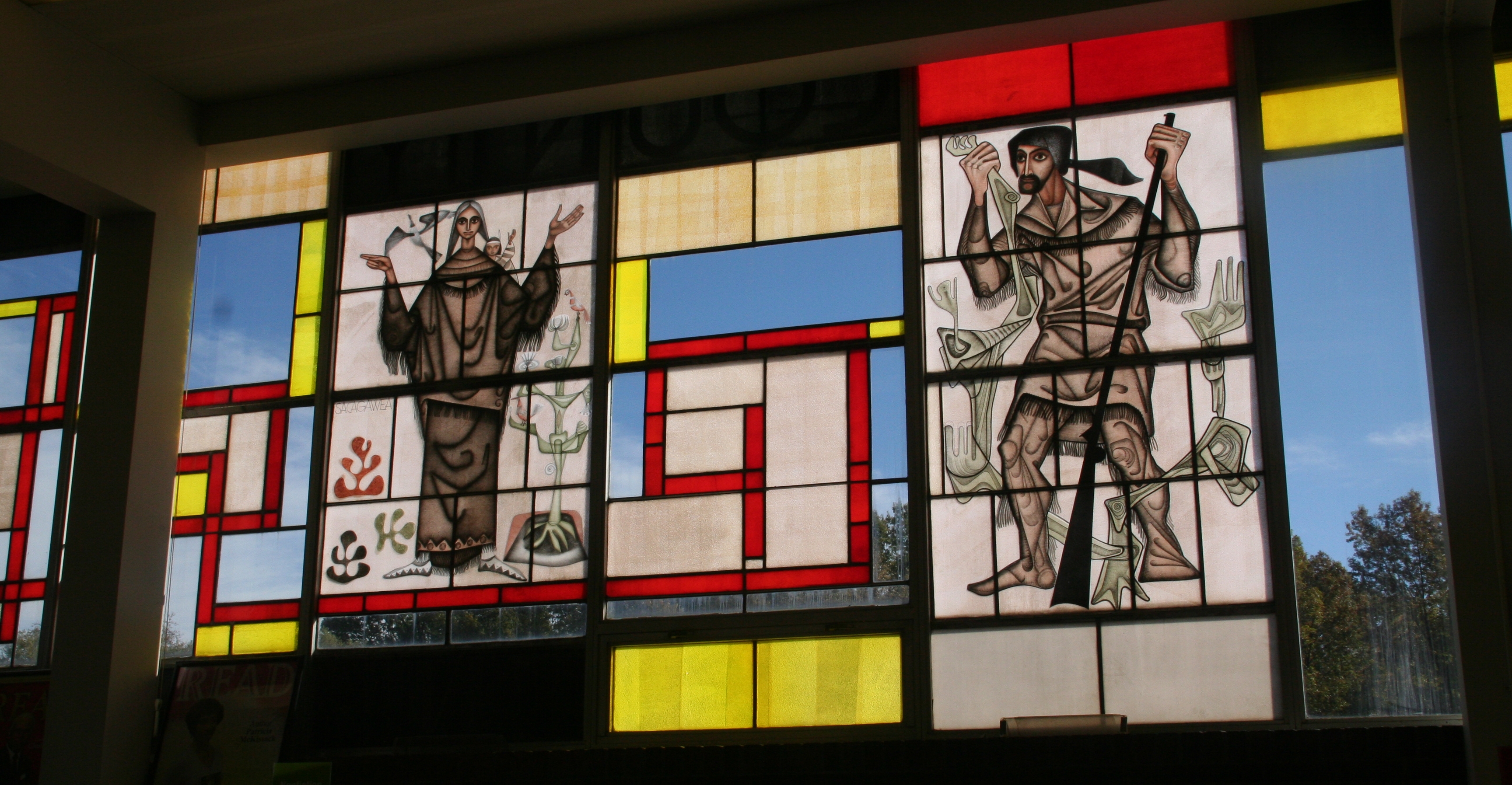 After nearly 50 years in use, the building’s architectural integrity is unparalleled amongst its peers, and it functions as a vibrant hub for the surrounding North St. Louis County community. Such qualifications should give pause when considering the building’s future, yet Lewis & Clark is slated for demolition pending the passage of a massive county bond issue in the fall of 2012.

On November 6, 2012, SLCL will ask voters to approve a $108 million bond issue to enact, among other things, a “proactive” ten-year facilities plan (PDF). Upgrades ranging from renovations, to additions, to wholesale replacement are a major part of the system’s strategy as recommended by the New York-based consulting firm Aaron Cohen Associates. The goal is to expand community and collaborative spaces, enhance flexibility, and provide more room for changing technologies. $76.9 million in funds would be allocated to replace eight, or nearly half, SLCL branches within four years, including the beloved Headquarters building in Frontenac. The historic 16,000 square foot Lewis & Clark would be replaced with a new $6.5 million, 20,000 square foot building. 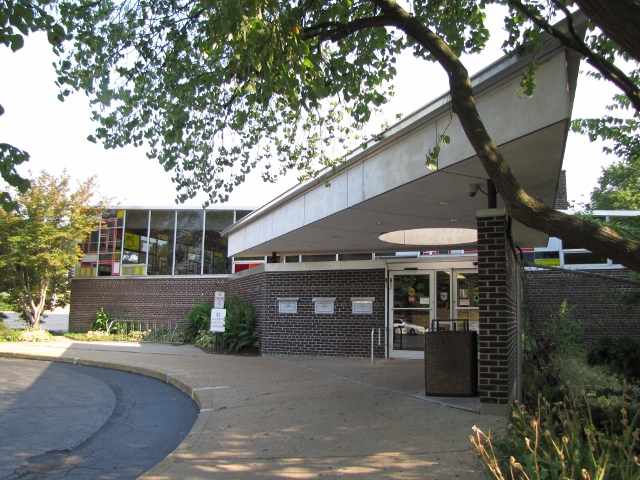 {entrance of Lewis and Clark library – photo by Lindsey Derrington}

Consultants have recommended Lewis & Clark’s demolition since 2008 because of its age and in spite of its excellent condition. The building has benefitted from numerous improvements since 2000, including a new roof, carpeting, HVAC system, parking lot, signage, furniture, and reference area. All of these investments would be lost in demolition, and all for a net gain of only 4,000 square feet. The need for this gain is questionable since the facilities plan also calls for the development of a new 15,000 square foot library building program for certain branches throughout the system. Given that the existing Lewis & Clark is 1,000 square feet larger than this, and in light of the building’s significance, one wonders why this scheme could not be implemented here.

Indeed, of the nine branches marked for renovations to existing facilities alone, seven range between 15,500 square feet and 18,000 square feet, and two serve higher populations than Lewis & Clark. These two, Jamestown Bluffs and Samuel C. Sachs, were built in 1998 and 2002. This indicates a fair amount of ageism in the decision to demolish the comparably sized and populated Lewis & Clark, which features an entirely open floor plan easily adaptable to 21st century needs. 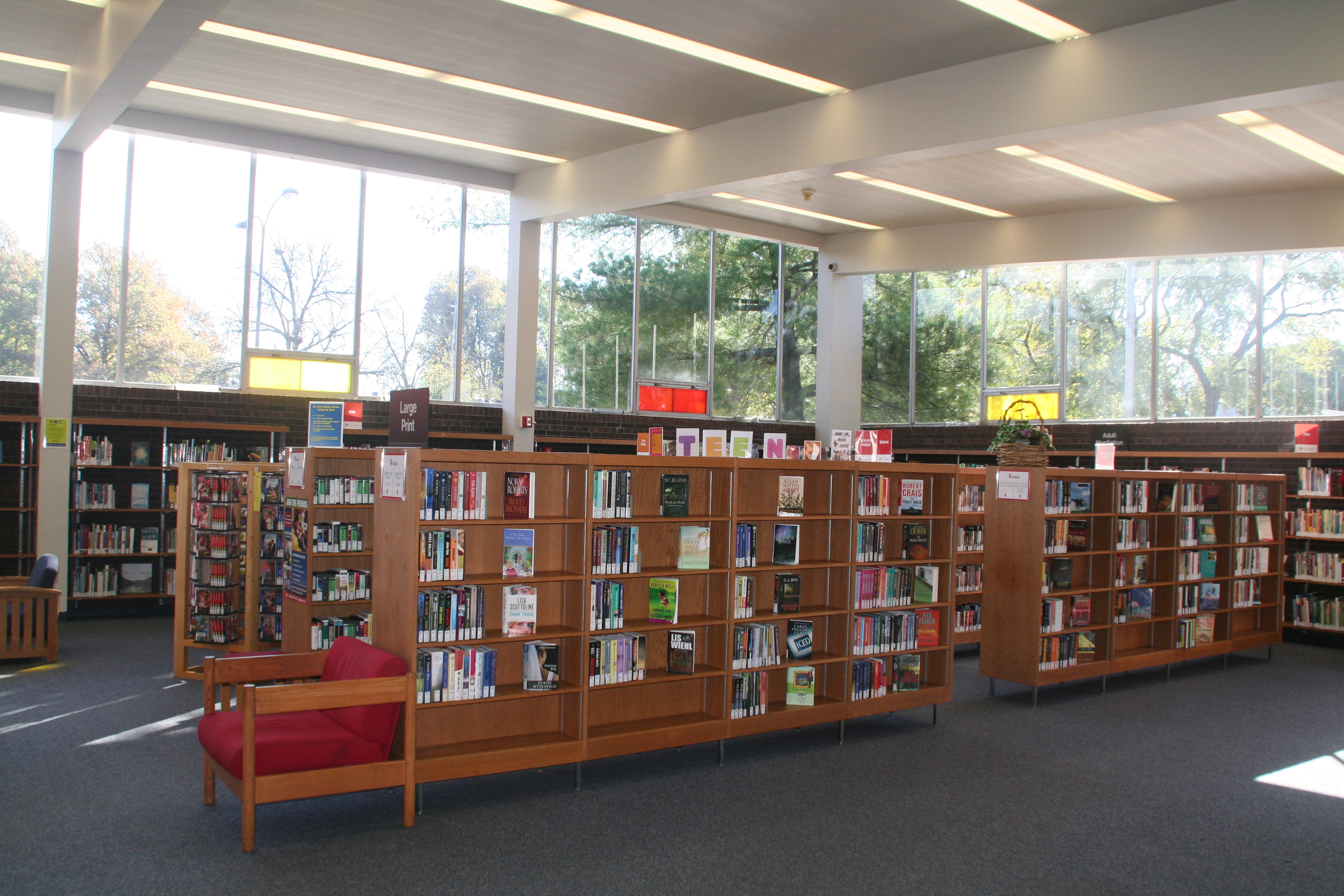 {interior of Lewis and Clark library – photo by John Guenther}

While most support SLCL’s desire to remain competitive in the fast-moving information age, its current strategy leaves something to be desired. As pointed out by St. Louis County’s Historic Buildings Commission, which opposes the plan, this takes none of these buildings’ architectural merit into account in weighing which should be demolished and which are deserving of renovation and addition. The Lewis & Clark Branch is eligible for the National Register of Historic Places based on its exceptional architectural significance and as a symbol of post-war development in North St. Louis County. Surely the St. Louis County Library system can move into the 21st century while still preserving its significant architectural past.

Your input is crucial!

To write in favor of preserving and renovating the historic Lewis & Clark Branch for future use, send a few words to:

Lindsey Derrington is a board member for Modern STL, the regional advocacy organization for preservation of mid-century modern architecture