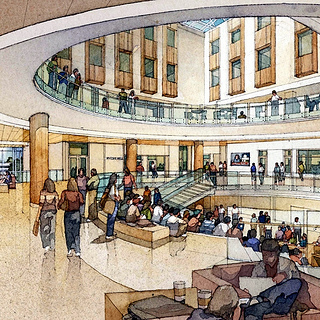 On the north side of the Washington University Danforth Campus, construction is underway for a new graduate business school building. Eliot Hall is nearly gone to make way for Knight and Bauer Halls. The Millbrook parking garage has been trimmed to accomodate a new courtyard opposite the entrance to the new Olin Business School building. In short, the expansion will nearly double the square footage of the business school. Architects of record, Moore Ruble Yudell, also designed the expansion of the MIT Sloan School of Management. The $90M project is scheduled to be completed by December 2013 and will include will include seven classrooms, an auditorium, 75 faculty offices and various forums, lounges and offices.

From the Olin Business School:

With the official groundbreaking ceremony on May 7, 2012 for Knight Hall and Bauer Hall, Olin launched a major expansion project that will nearly double the business school’s footprint on Danforth Campus, where it is currently housed in Simon Hall and The Charles F. Knight Executive Education & Conference Center.