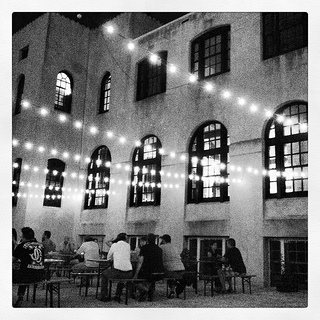 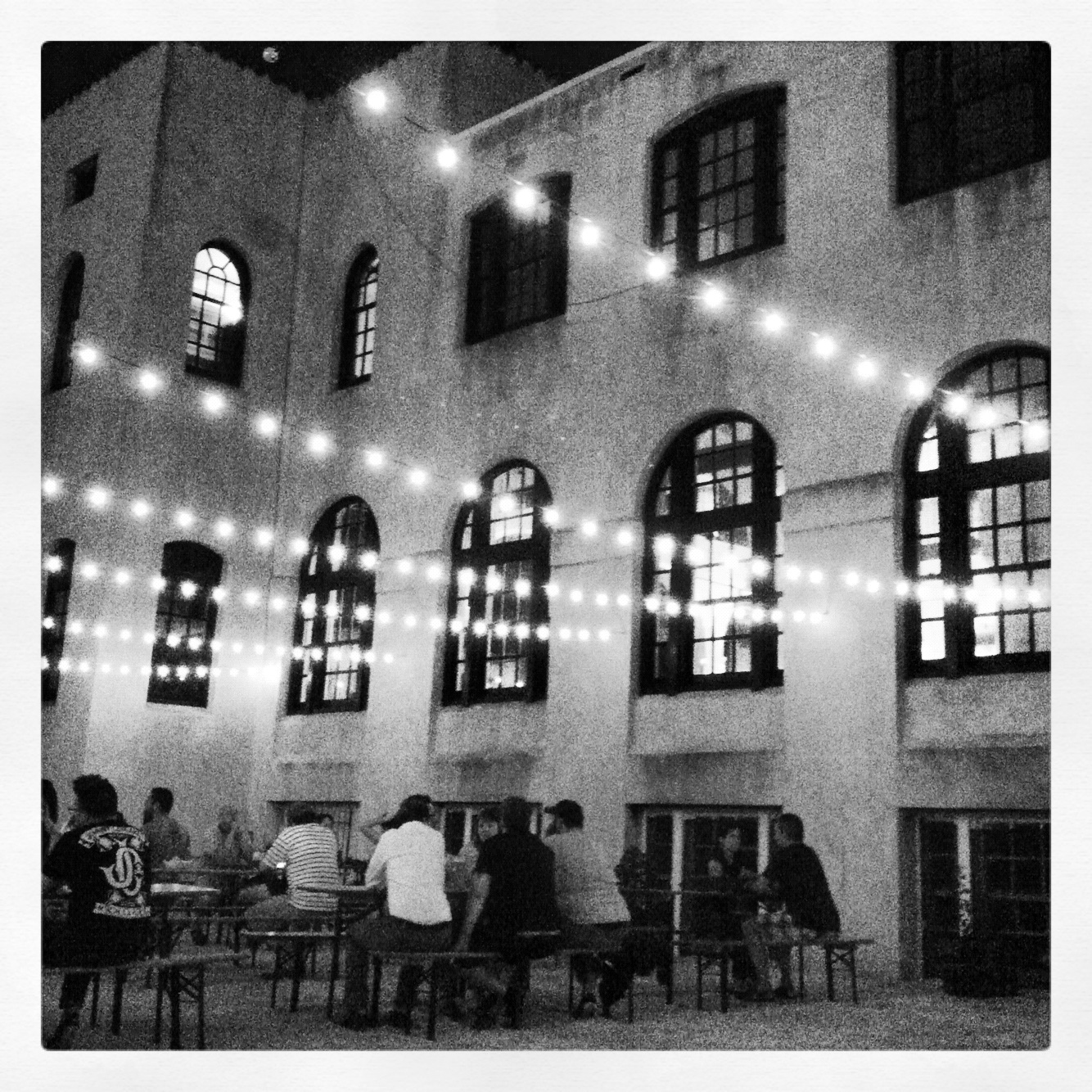 I haven’t actually read any reviews of the UCBC bier garten. That “rave review” is mine. UCBC announced yesterday on their blog that the bier garten would have a soft opening and I managed to stop by for a liter. The short of it is that this is an authentic Bavarian bier garten, an open courtyard with communal tables, a beer hut, 1/2 and 1 liter steins, the whole deal. That’s great in its own right, but what’s really exciting about the UCBC bier garten is that it’s truly a “place”.

We don’t do beer reviews here at nextSTL, so I’ll leave it at the beer being really, really good. But one of those “reallys” can be attributed to the new space. Just like you swear that margharita pizza you had on the shore of Lago di Como was the best ever created, the beer simply tastes better here. Place influences taste. This is where UCBC got their bier garten right.

Yet, even a few months ago, the idea was far from a sure thing. The Central States Life Insurance Company building (that white stucco Mission Revival place you would have sworn was a church) next door was for sale. It went into foreclosure and UCBC spent some time seriously considering purchasing it. For what, they didn’t exactly know, but they wanted the parking lot for a bier garten. Still without plans for the building itself, they were ready to buy when they learned someone else has swooped in and bought it for $575,000. 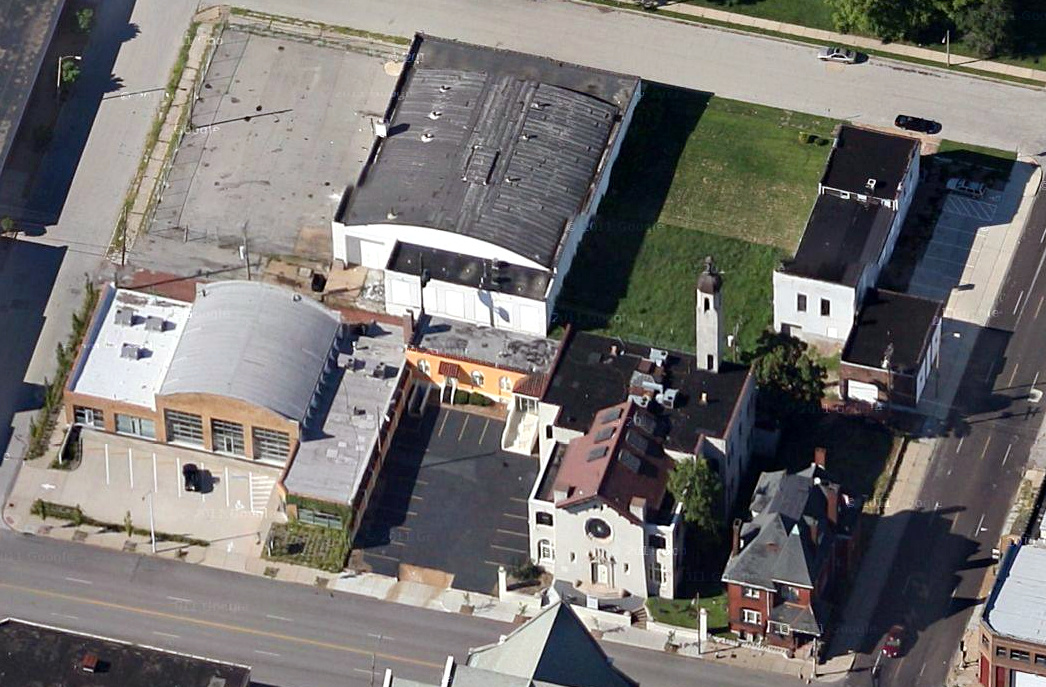 The building was designed as the headquarters for the life insurance company in 1921 for $140,000 by architect Tom Barnett (1870-1929). Barnett was the youngest architect on the commission for the 1904 World’s Fair. He went on to design the Jefferson Hotel, the Kingsbury Place entrance gates, the Adolphus Busch Tomb in Bellefontaine Cemetery, the Arcade Building and many other landmarks. This information and more can be found in the Central States National Register form prepared by Lindsey Derrington and Michael Allen of the Preservation Research Office. (PDF embed below) 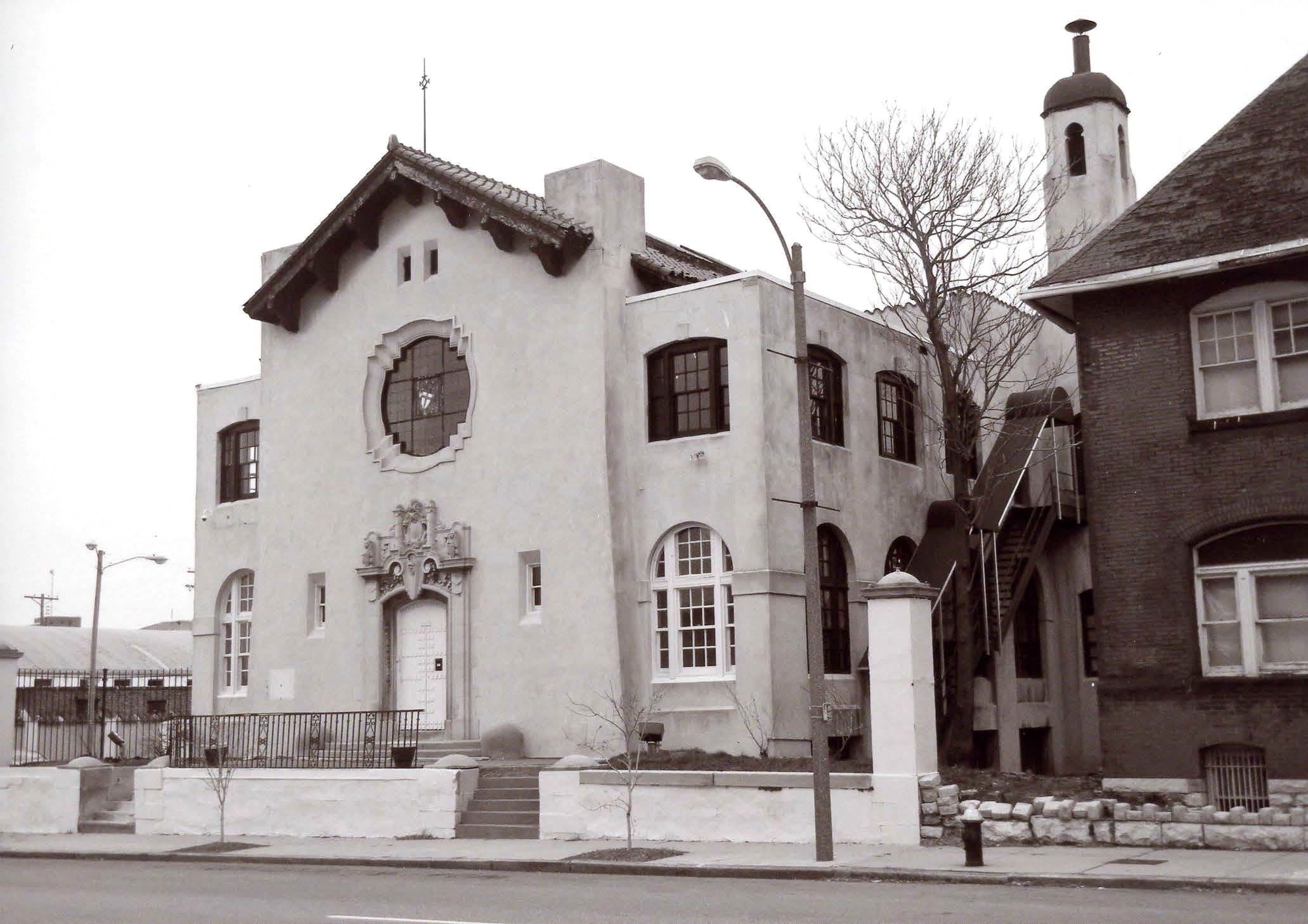 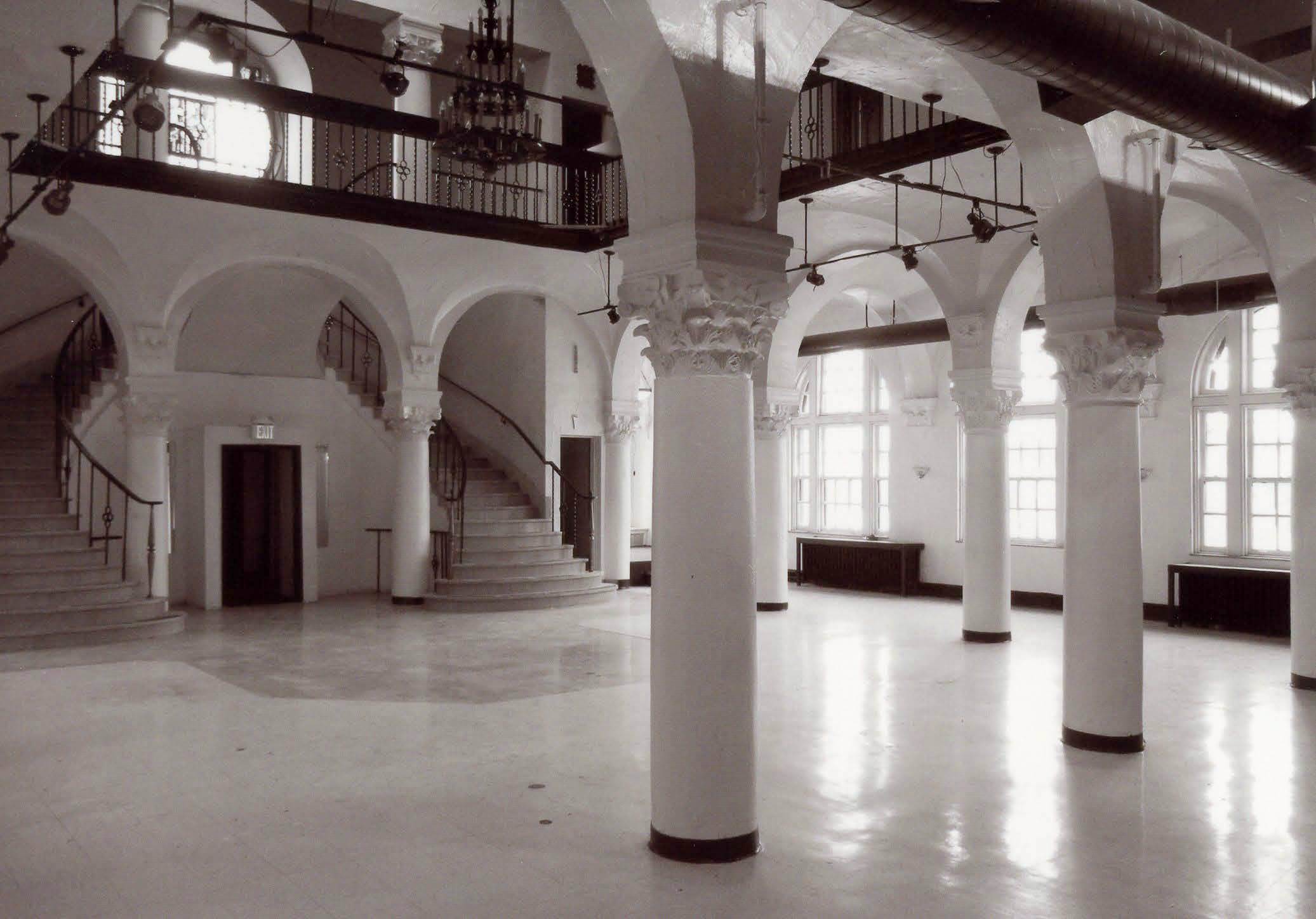 In retrospect, the Central State’s building sale to the IT firm Chameleon Integrated Services was serendipitous. The buyer had apparently heard of UCBC’s interest in the parking lot and bought with a deal in mind. The lot is now leased to the brewer and UCBC avoided taking on the expense of a large space without an immediate use. Chameleon is pursuing a $2M rehab to accomodate 20 employees and space for adding possibly 20 more over time. The firm is reportedly only planning to use the second floor of the building and is exploring other options for the remainder of the space.

The project has happened quickly. The sale of the Central States building to Chameleon was recorded March 21. News of a 400-seat outdoor bier garten, complete with shiny rendering appeared in the P-D April 6 and the space opened June 7.

Why is the space great? The Central States building provides a picturesque three-story backdrop, as if on a theatrical stage. It dominates the space as the north and west are enclosed with unadorned one-story structures – the UCBC tasting room (former service station) and a one-story 1948 addition to the Central States building. This addition will soon house additional bathroom facilities for the bier garten and also allow access to a to-be-built parking lot behind the buildings, fronting Samuel Shephard Drive. 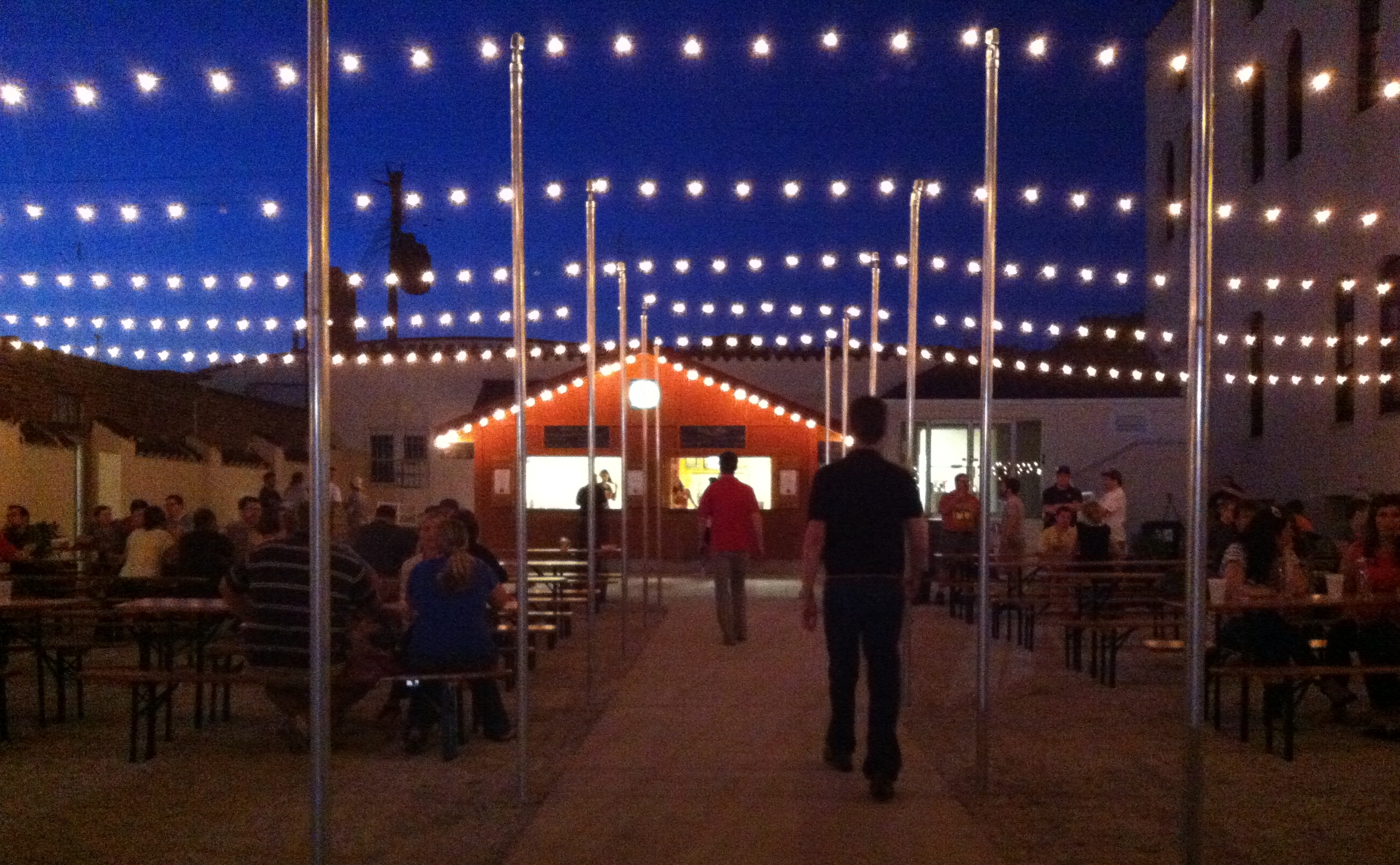 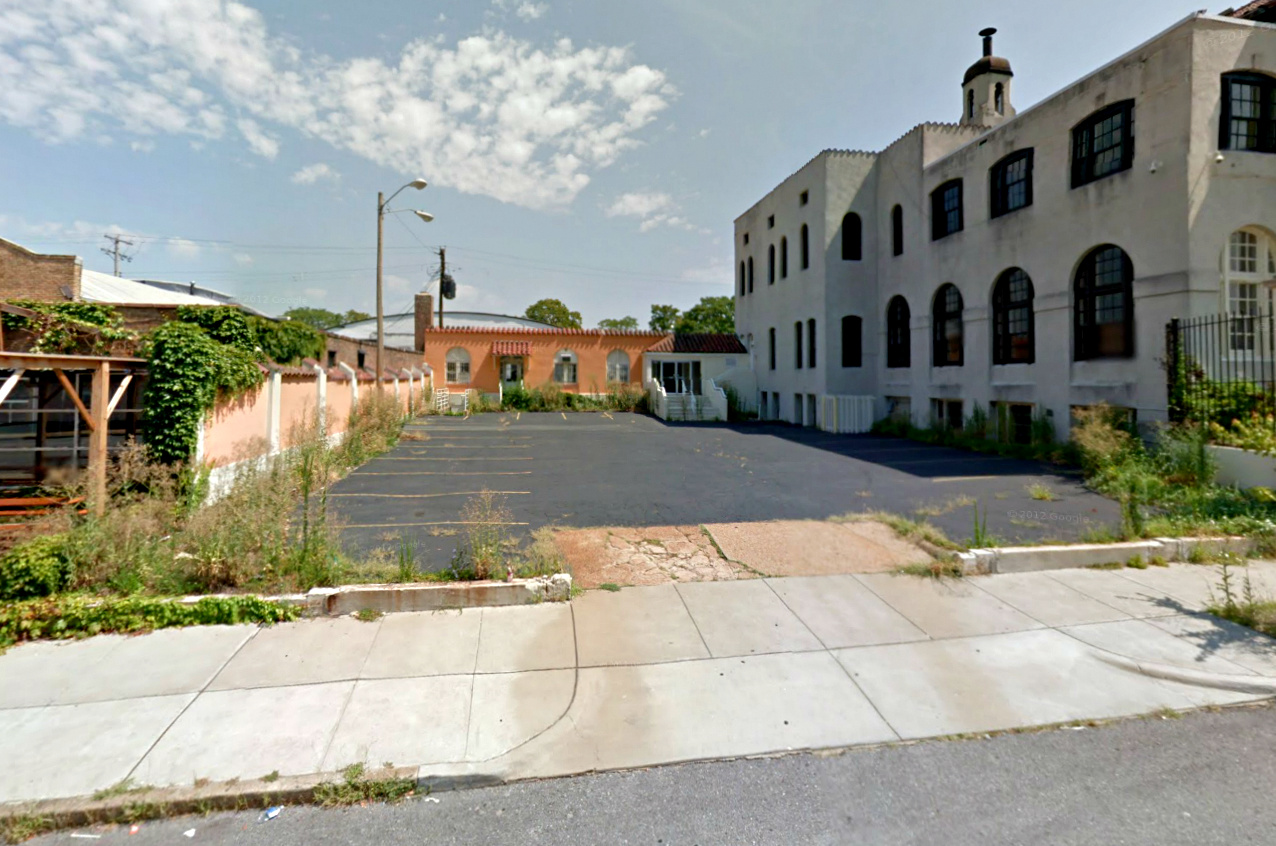 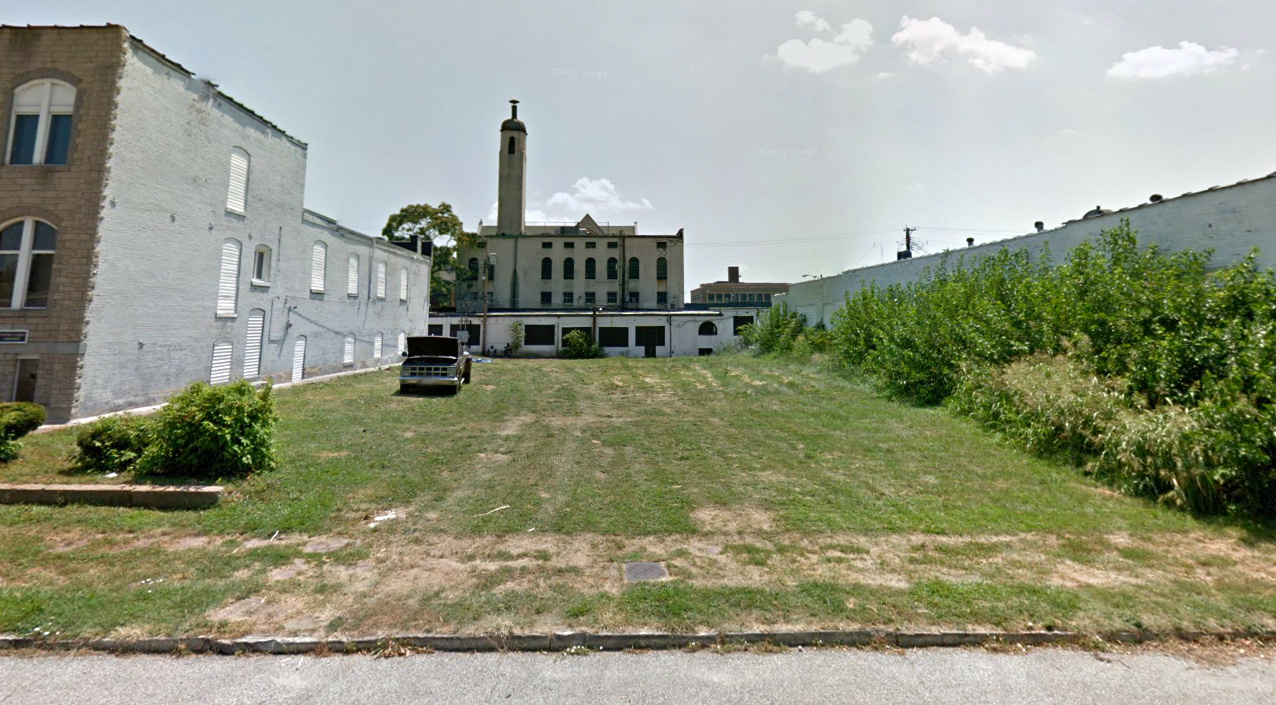 The space sits within a great frame. From within, one has an incredible perspective view of the Washington Tabernacle Baptist Church across Washington Avenue. The church, built in 1877, nearly lost to fire and rebuilt in 1948, is a City of St. Louis Landmark. According the city’s website, it’s one of the few documented sites in St. Louis visited by Martin Luther King, Jr. He spoke at the church on May 28, 1963, on his way to the March on Washington. It’s a beautiful building and adds a more distant focal point to the space. 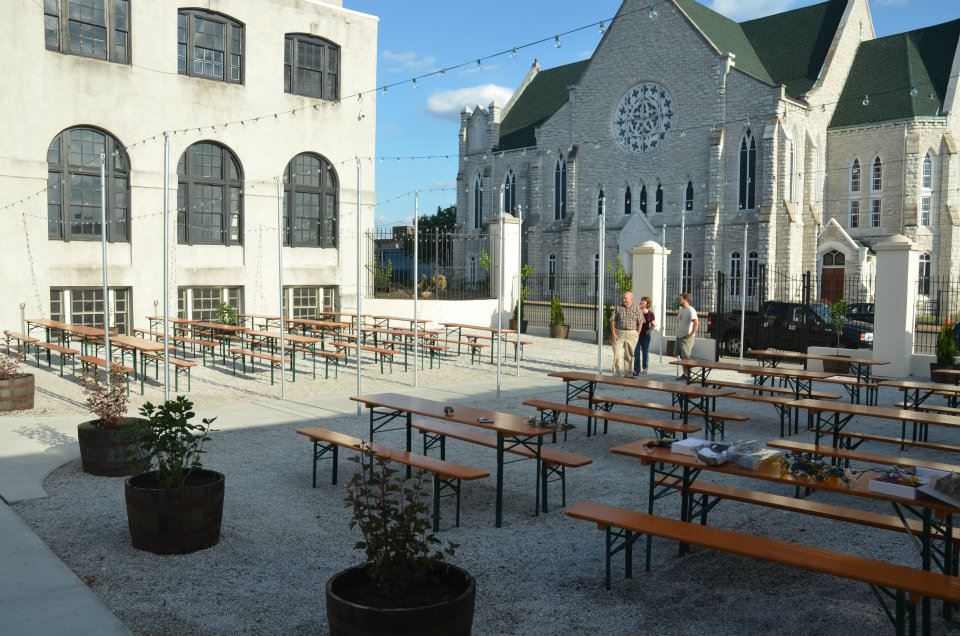 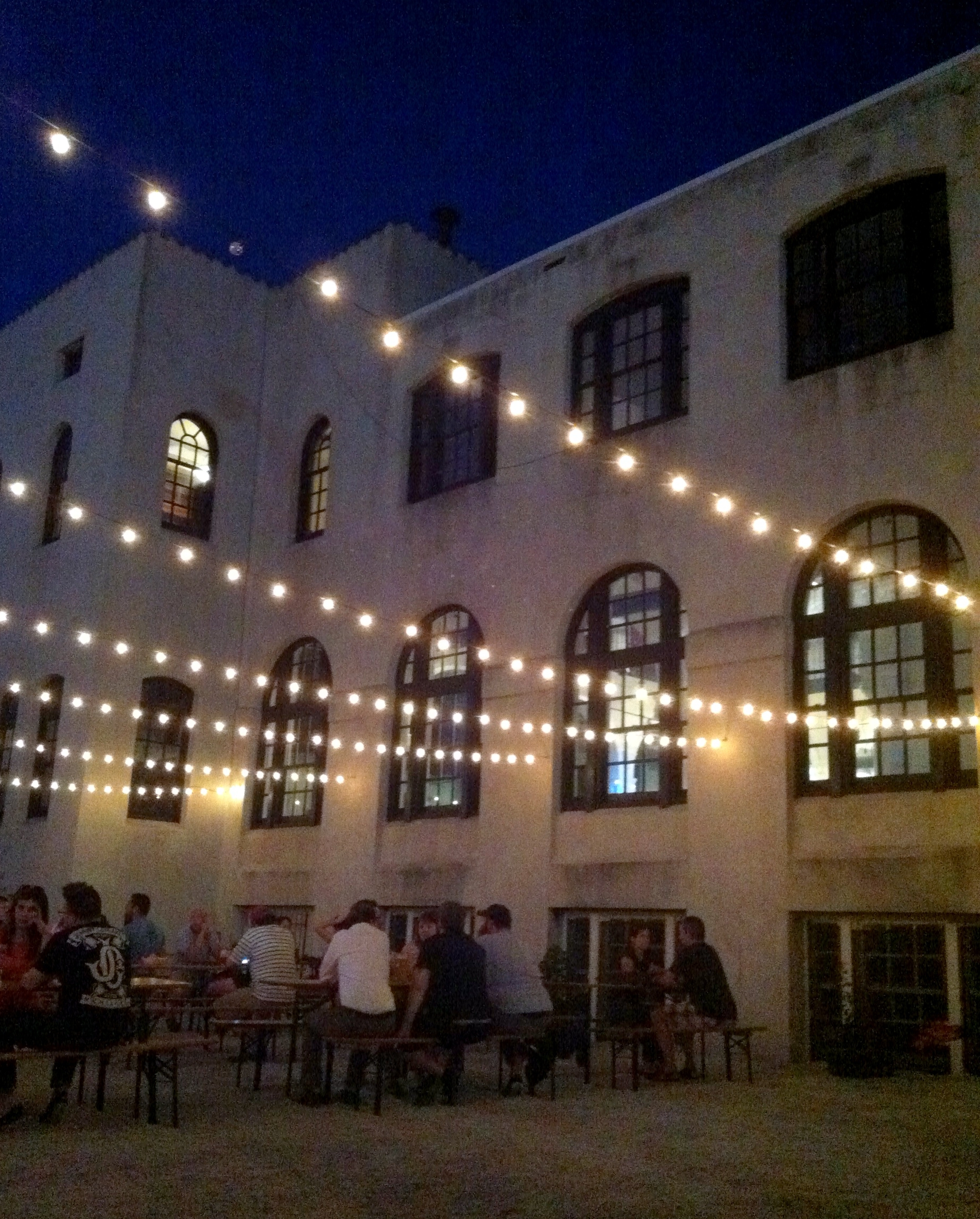 UCBC co-founder and brewmaster Florian Kuplent told the Post-Dispatch in early April when the bier garten project was announced, “Our hope is to provide our patrons with the look, feel and communal atmosphere of what has existed in Bavaria for centuries and what was a big part of St. Louis’ past.” By that measure, one would have to say they got the space just right. It’s not a public space per se, but it is communal and anyone willing to put down $9 for a liter will be able experience an incredible sense of place.

In addition to the bier garten, UCBC shared in January that they would begin bottling their product and it appears that it’s likely to come true any day now. To get the job done, they purchased a complete decades-old bottling line from an east coast brewer and have had to use a little more TLC to get it humming. Dave likened it to maintaining a Triumph TR (my offered analogy was a 1962 Jag E-type), the point being if you have a passion for something, you want a particular piece of equipment regardless of endless little (and big) maintenance issues. Once the line is up and running, it will be just as Dave and  Florian envisioned.

{the bier garten from Washington Avenue – image by UCBC}