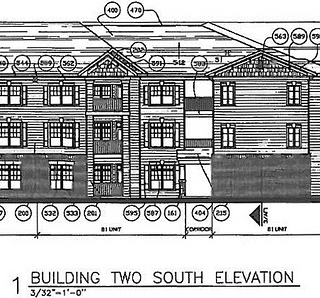 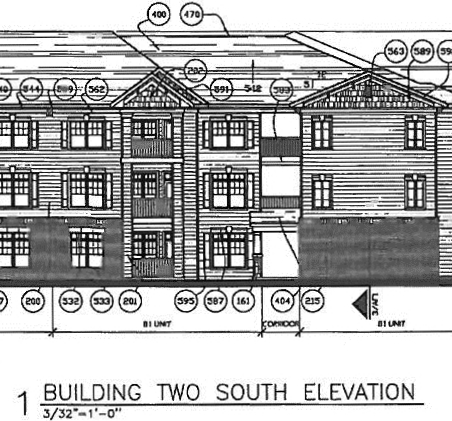 The permits had been issued and the dirt started to turn, but there was no public information regarding what was being built on the 4400 block of Chouteau Avenue in Forest Park Southeast (The Grove). Paperwork showing a residential project named "Aventura at Forest Park" didn't do much to inspire confidence. Now we can report that the $12M project consists of two three-story residential apartment buildings totaling 101 units. The project leaves the remaining Station G building in place as the developer was unable to acquire the property.

The two buildings surround Station G and occupy nearly two-thirds of the street front on Chouteau. The site has been vacant since the demolition of the gasometer and more than one development proposal has come and gone. A previous 202-unit project would have stood to the west of Station G and included retail space. Per city records, the corner of Chouteau and Taylor Avenues is now owned by Washington University. There has been no indication as to what future plans for the site may be. The Aventura projects consists of, 23 1BR/1BA:720sf: $1,000/mo. units, 69 2BR/1BA: 995sf: $1,100/mo units and 9 2BR/2BA: 1100sf: $1,300/mo. units.

This is an exceptionally important development for Forest Park Southeast, a neighborhood that despite millions of dollars in investment saw nearly 800 residents leave from 2000-2010, more than 20% of its population. The number may not be surprising given the number of residential conversions and demolition, but dipping below 3,000 residents is a decades long low. The importance of adding approximately 150 residents can hardly be overstated. Aventura is the first large scale project that begins to fulfill the potential many have seen in the neighborhood for more than a decade.  While streetscapes have been improved, new businesses have opened and homes have been rehabbed, larger investments had failed to materialized. Get this project out of the ground is a major achievement. 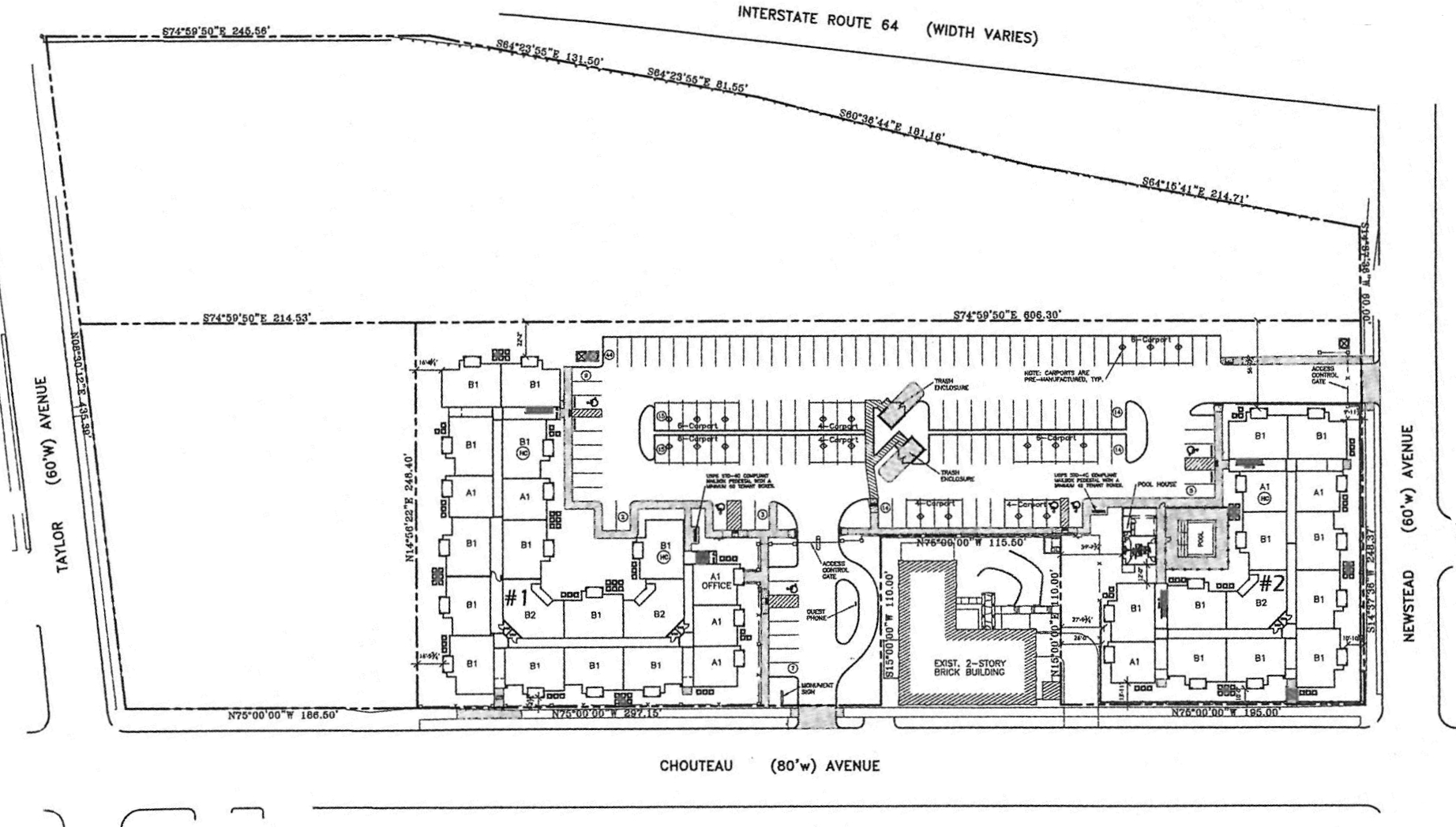 For the development, the massing is right, the height is right, the parking is hidden, but "Aventura at Forest Park" comes from the same developer as "Aventura at Indian Lake Village", "Trails of Dickson", "Turnberry Place" and "Canyon Ridge", and it looks like it. Closer to home, the developer has built Hanley Station and Kirkwood Station Plaza. For all it gets right, the design falls well short of what should be and what could easily be built at this location. New construction projects in St. Louis such as the Gotham Building on Delmar, Six North at Sarah and Laclede and even the new Salvation Army Midtown project present far better form for a neighborhood like The Grove. If successful, the project could be followed by additional phases, presumably on adjacent lots. Unfortunately, this likely means a monolithic repetition of the subpar design. 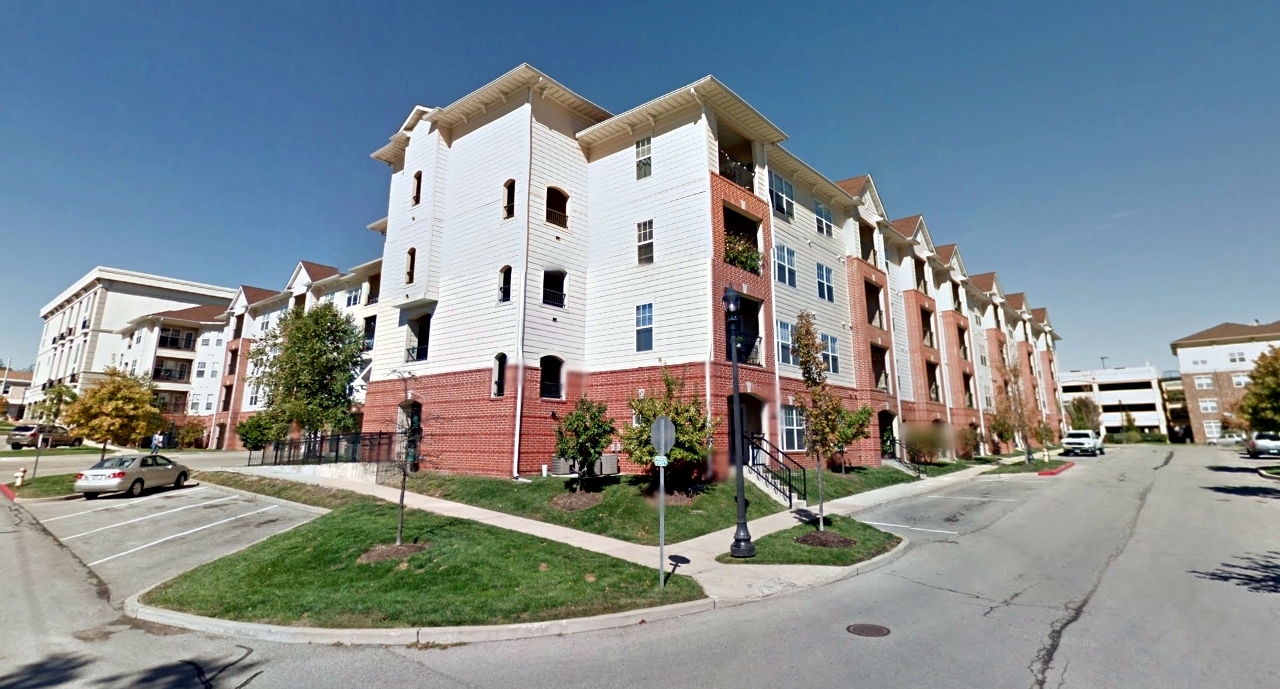 {the developer has completed projects such as Hanely Station} 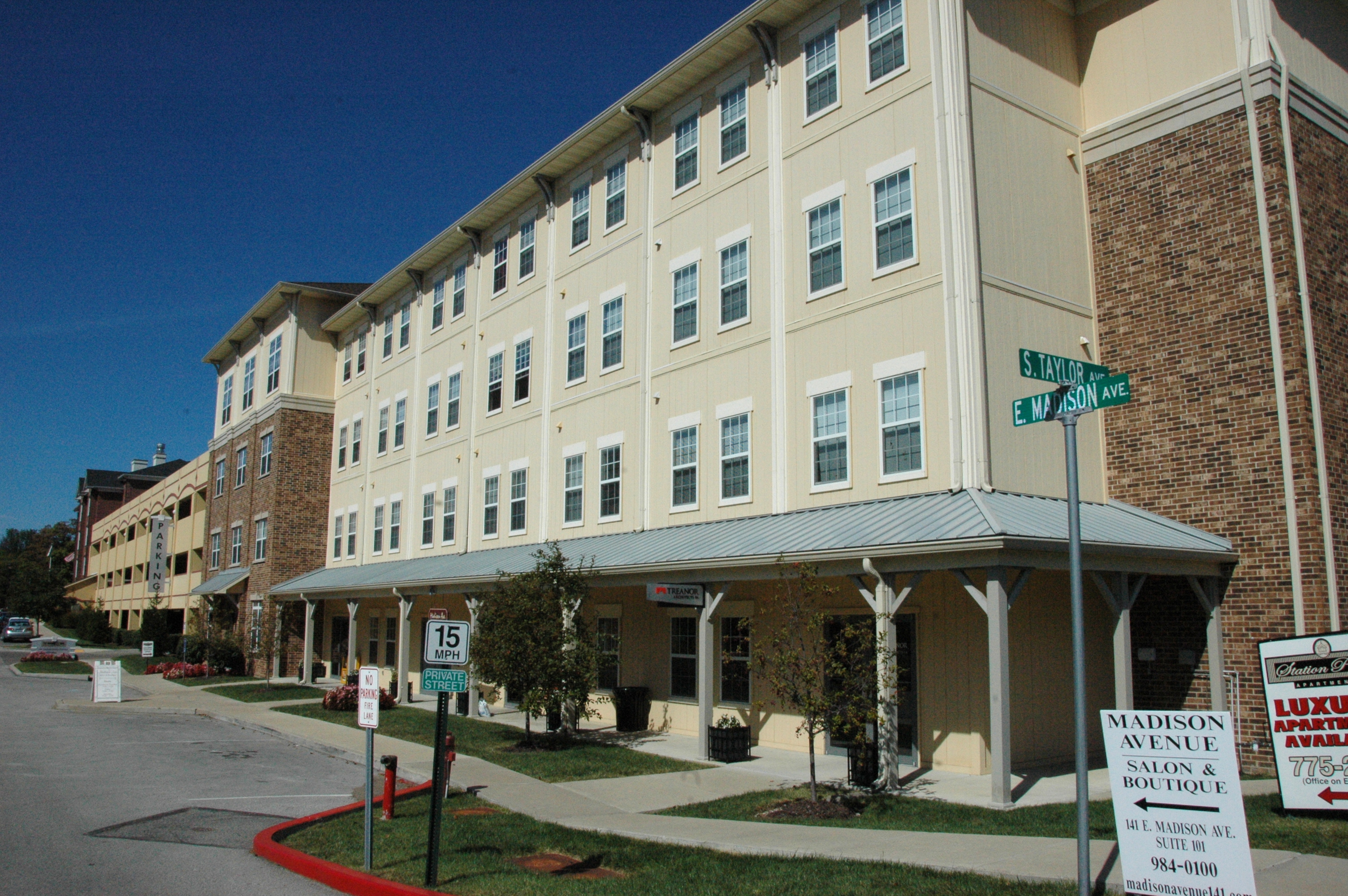 {Kirkwood Station, by the same developer}

Any of the following designs, each one of them within two miles of the Aventura site, would be vastly preferrable for the Forest Park Southeast neighborhood} 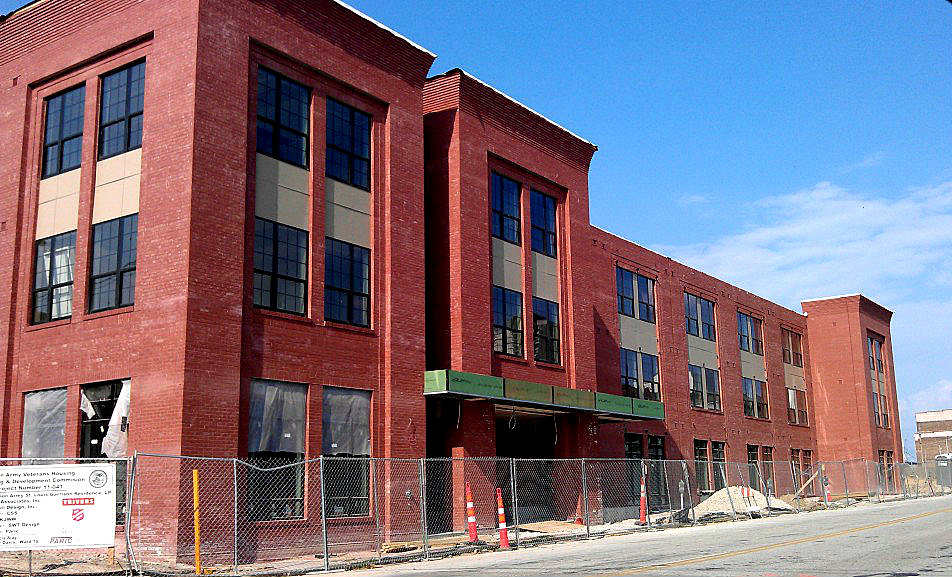 {the Gotham on Delmar} 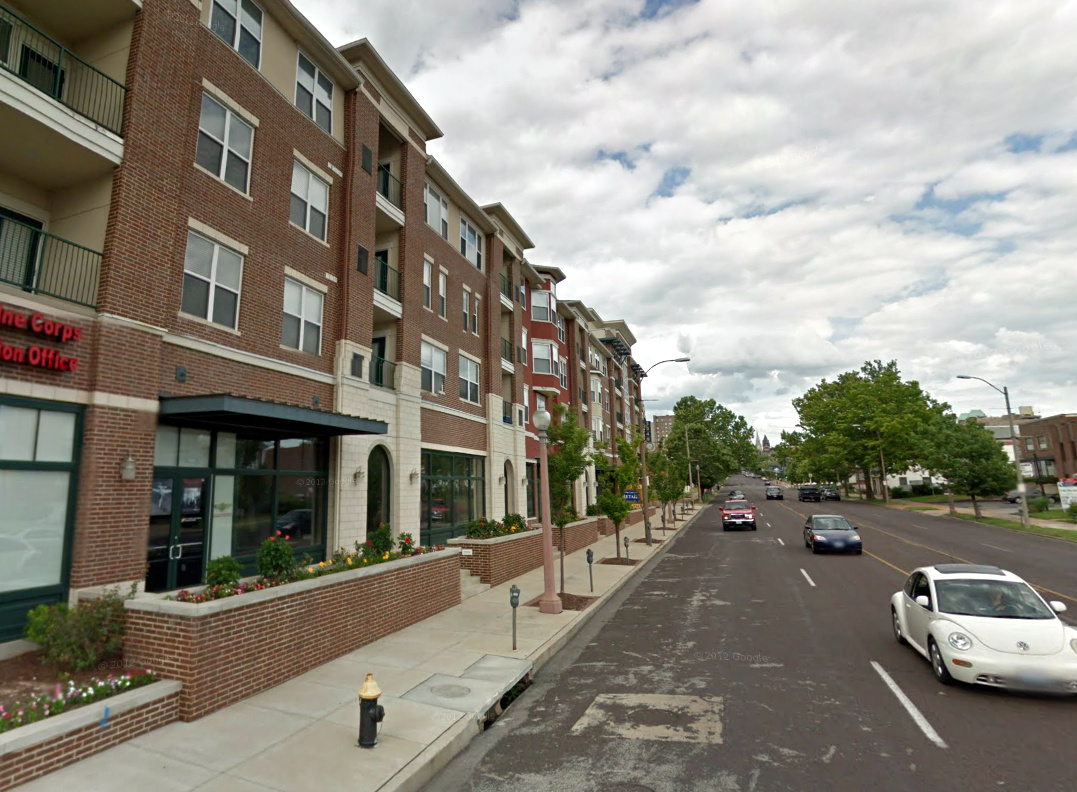 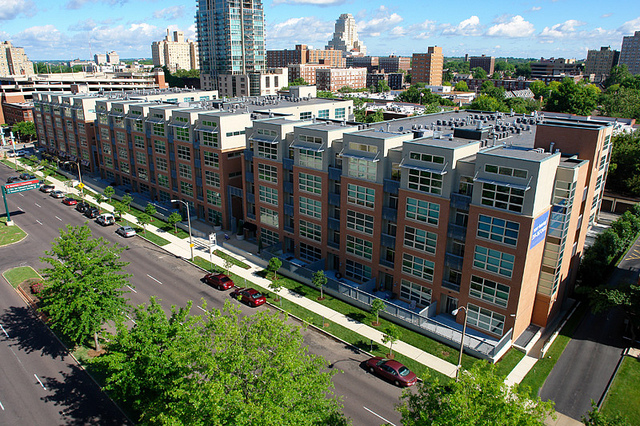 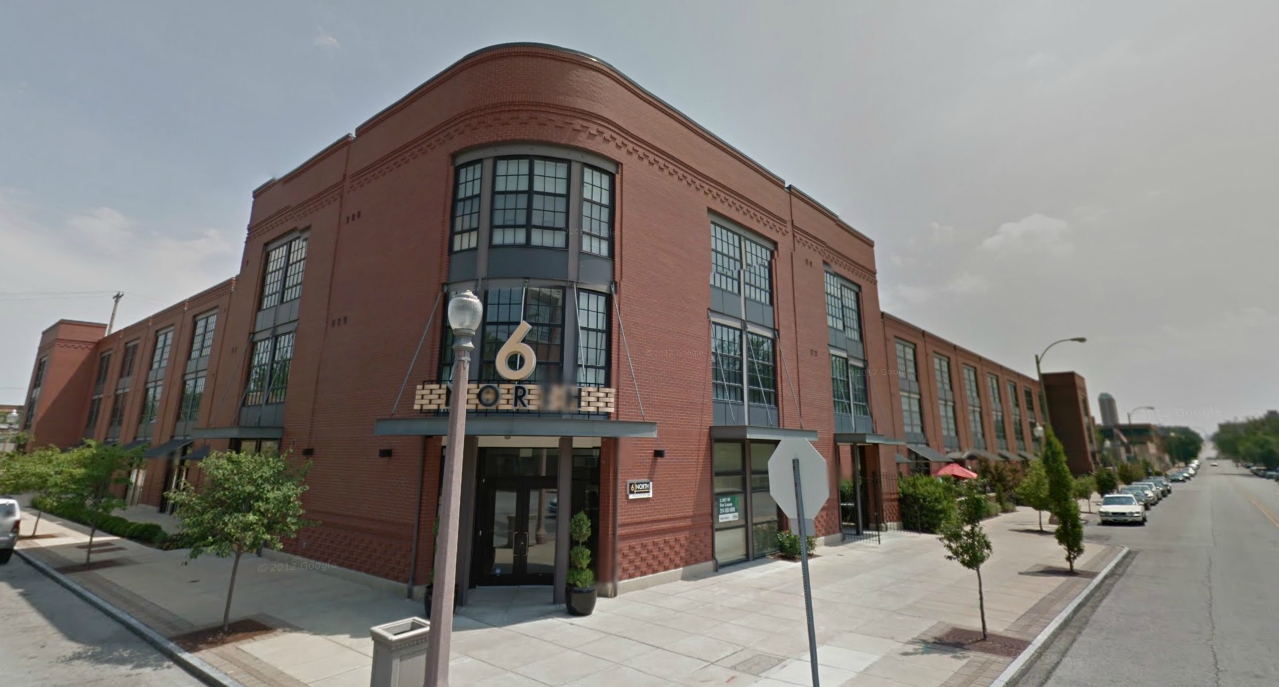 The developer is seeking a 10-year tax abatement, seeking to hold city property tax to pre-development levels, or near zero. In recent years, 5-year abatement has become more popular than 10-year as the neighborhood has witnessed successful redevelopment and prices for renovated homes reaching $200K, or about $100 per square foot. At $1K for a 1BR, 720sf unit, these apartments are relatively high-end for the neighborhood. That's a good thing, but it also shows that tax abatement likely is no longer a necessary tool for all developments. In addition, the City of St. Louis is very explicit in its requirements for a tax abatement, stating flatly on the application webpage, "Application must be made before construction begins." In fact, single-family residential rehab projects have in the past been denied tax abatement because the project was wholly, or partially finished at the time of application. Construction on Aventura started last month and an application for tax abatement has not been submitted. Despite this, the Park Central Development Corporation (a community development corporation serving the neighborhoods of the 17th Ward) wholly endorses 10-year abatement.

Park Central uses several well-developed and necessary criteria to determine if a project should receive tax abatement. Among those: Does the project conform to an “urban” development pattern? Is the development’s parking behind the building? Is the use appropriate for the neighborhood and the particular block? Is this an appropriate location for increasing population density? These are great questions. However, the one missing is the "but for". "But for" tax abatement, would this development happen? This is why the city requires an application prior to the start of construction. In this regard, tax abatement shares some commonality with Tax Increment Financing projects. If they would be built without giving local tax revenue to large corporations and developers, why give away our money? This development is happening with or without tax abatement. Therefore, the awarding of tens of thousands of dollars amounts to nothing more than a "thank you" card to the developer stuffed with cash.

Ultimately, the Aventura development should be cheered. With the number of vacant lots and developable sites remaining in Forest Park Southeast, it’s unsurprising that the first big project won’t add to the neighborhood’s distinct architectural feel. Yet, it should stand as a warning and recent development momentum should give Forest Park Southeast residents, Park Central Development and the Washington University Medical Central Redevelopment Corporation more confidence and more leverage to demand a better project next time. 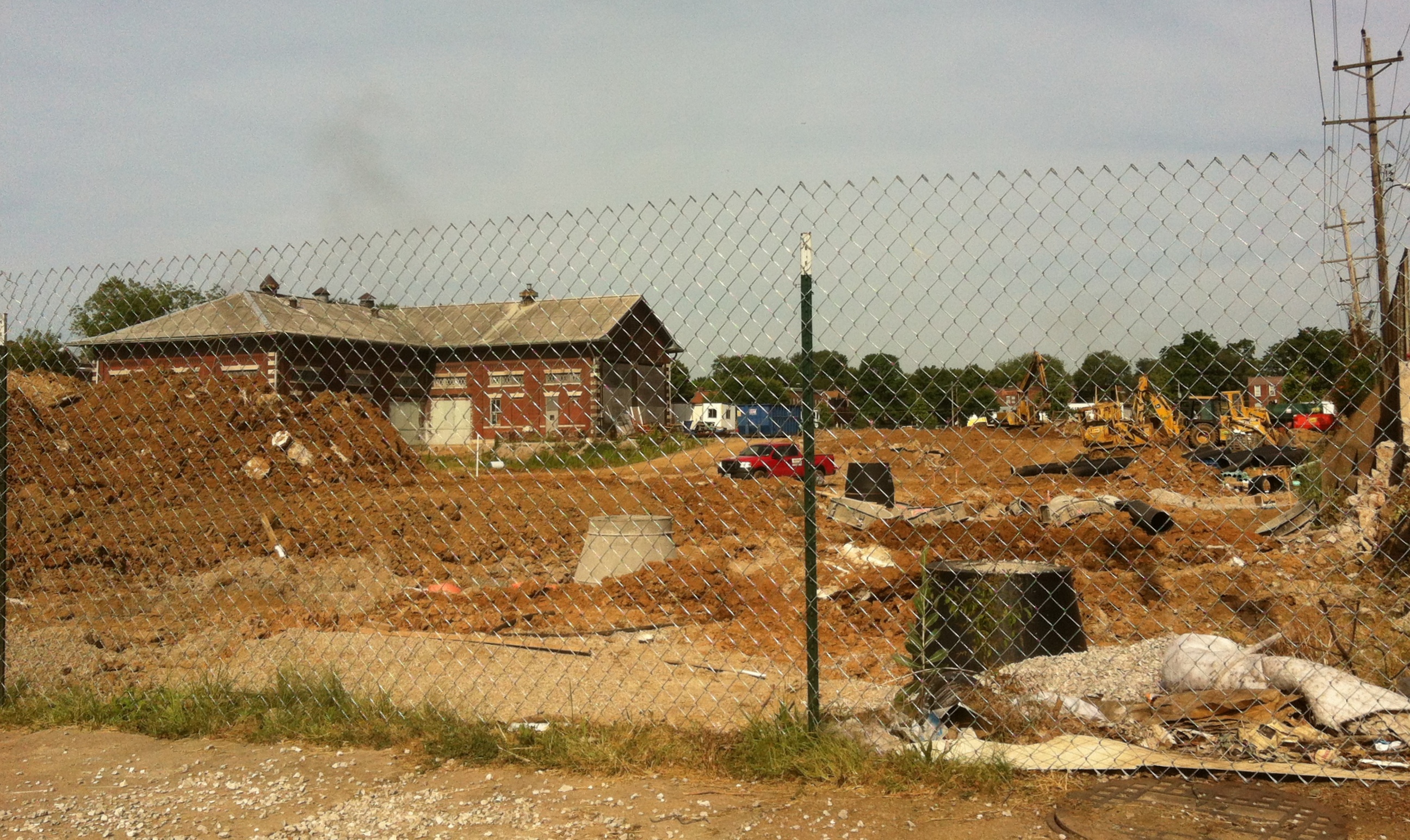 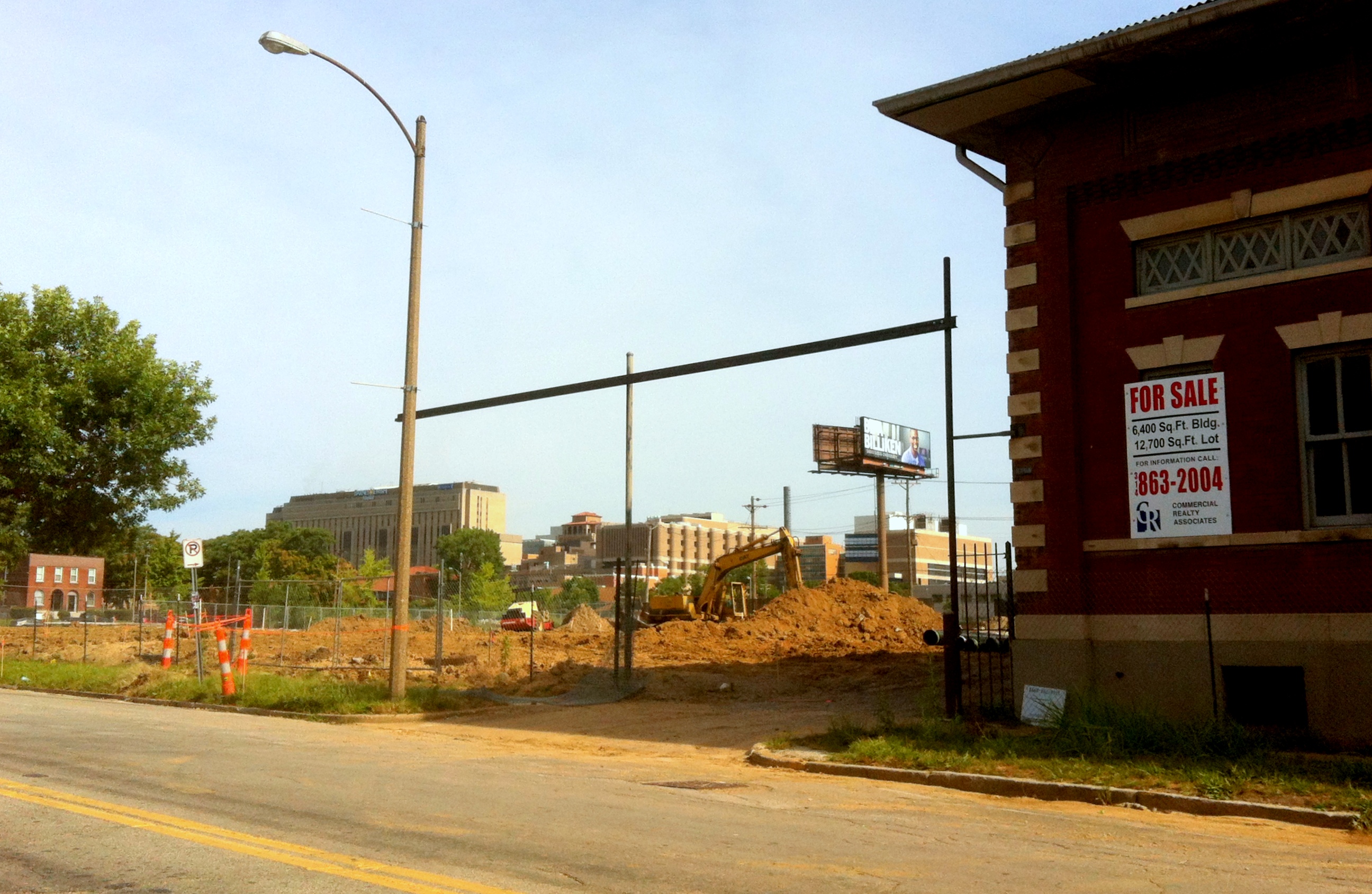 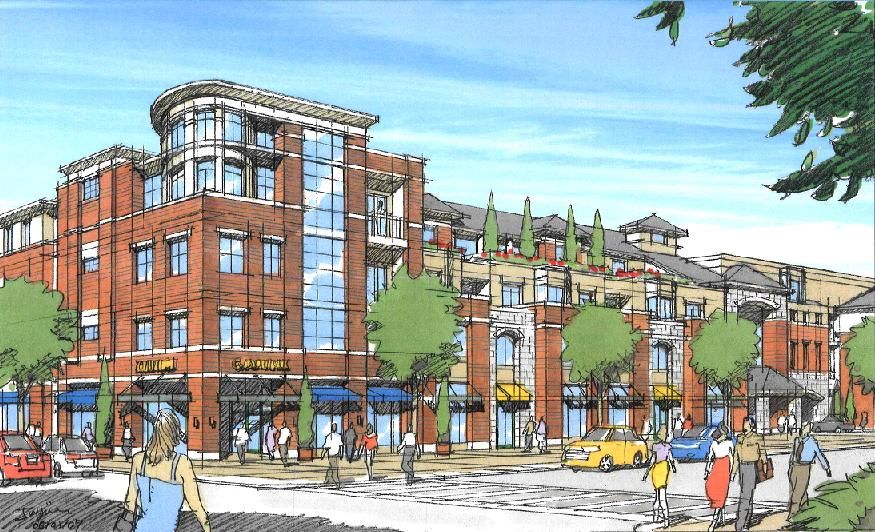 The aesthetics of the Aventura project continue to get worse. The construction image below shows a cheap cinder landscape block wall running the length of Newstead Avenue. A similar wall faces south onto Chouteau. Not only with the monolithic suburban-aethetic development not offer a modern urban design, it will be placed on a cinder block pedestal, further removed from its surroundings (think Hanley Station placed behind a block wall). The wall wasn't apparent in previous architectural drawings and represents a severe decline in the design of the Aventura. Prior to construction the lot was level with surrounding streets and it appears that instead of excavating for utilities, they have simply been layed on top and the apartment buildings elevated. Sadly, this is a design decision and project that the Forest Park Southeast neighborhood and city will be forced to live with for decades. 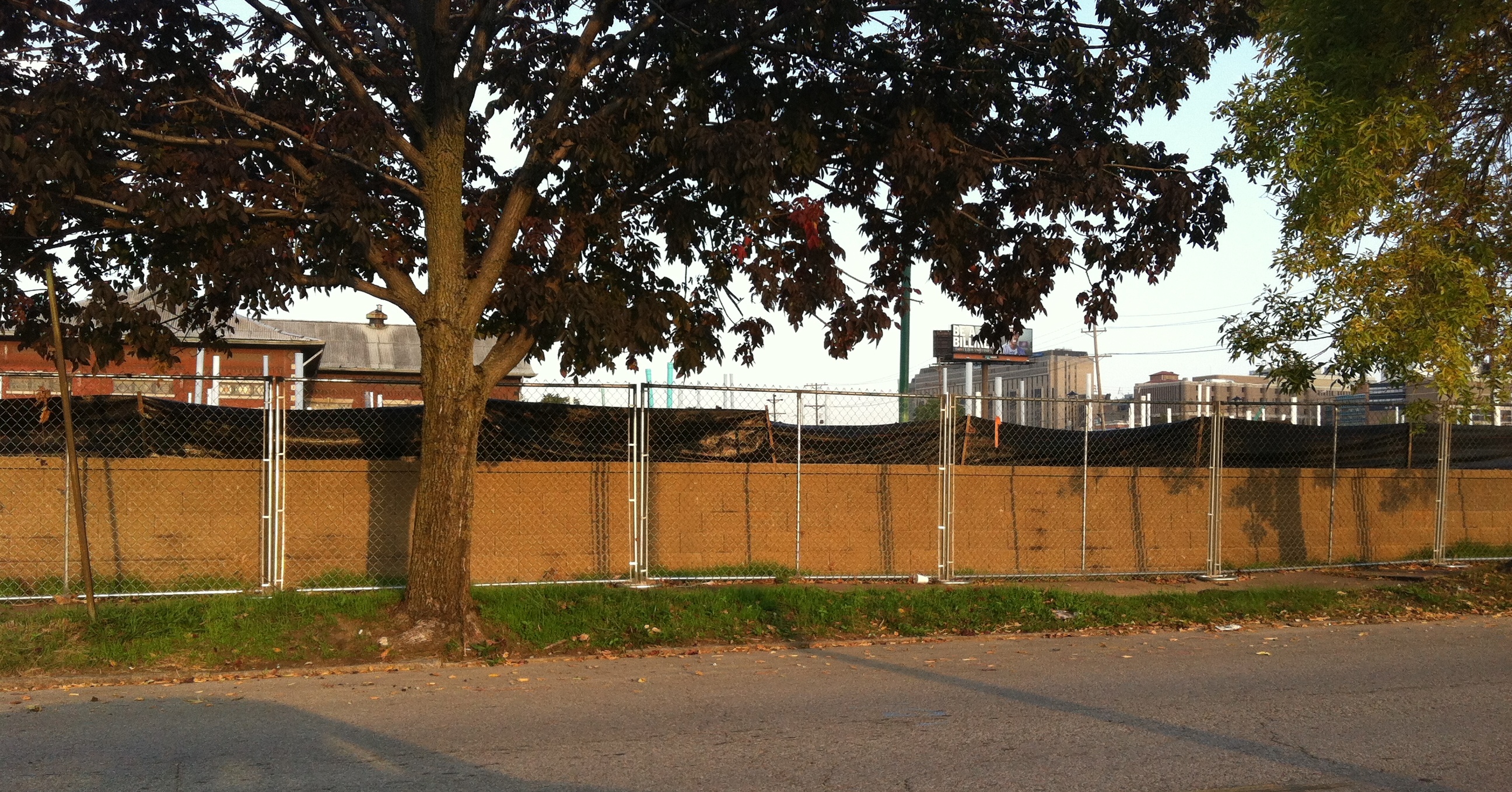 {east elevation of Aventura under construction}