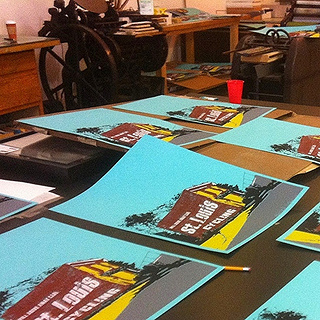 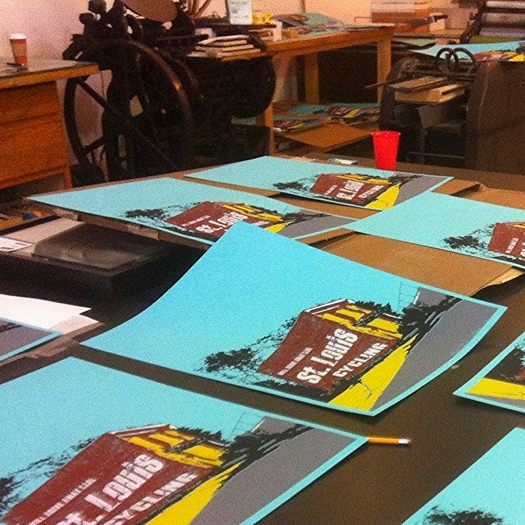 ARTCRANK – a poster party for bike people, gets rolling this Friday at the Atomic Cowboy in The Grove and cooincides with three days of professional cycling in the city. I’m lucky enough to have been chosen for the second year in a row as one of the 30 artists presenting an original poster at the show. If you missed my poster last year, check it out here. The show is meant to bring together the cycling and art communities, showcase local artists and offer affordable original works to purchase. Proceeds from the show benefit St. Louis Bicycle Works.

Posters must be original and many feature some element of the event city. Last year I used a photograph I snapped at the Tour of Missouri as the peloton cut through Lafayette Square as the starting point for my print. Searching through past cycling photos and shuffling through sketches and other ideas had me at a dead end this year, until I happened upon a surprising photo. 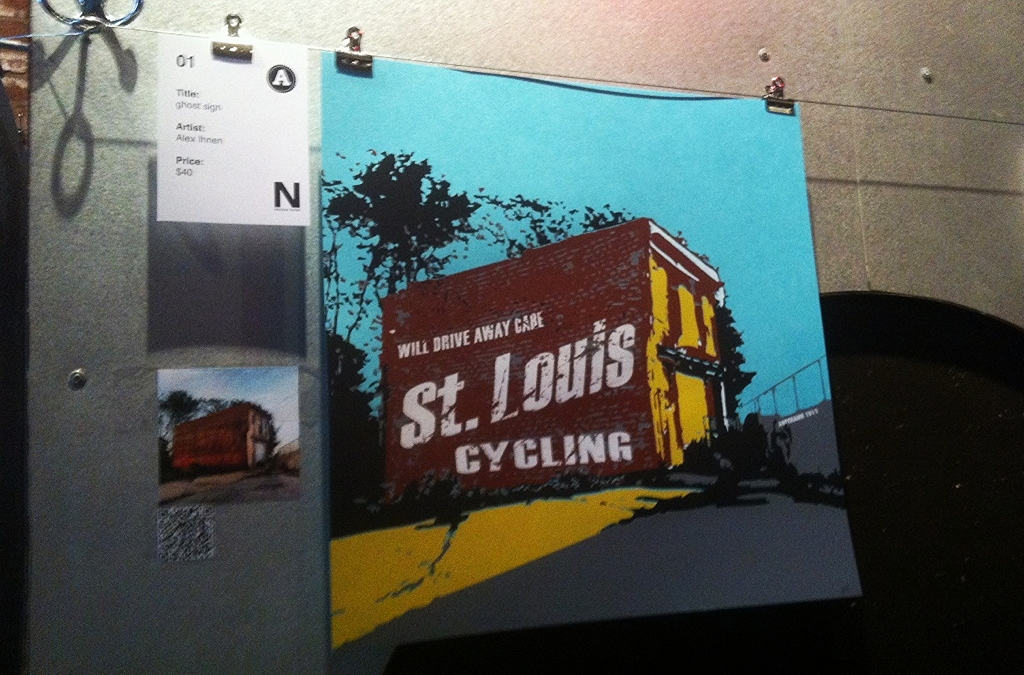 {the poster displayed at the Atomic Cowboy for ARTCRANK STL} 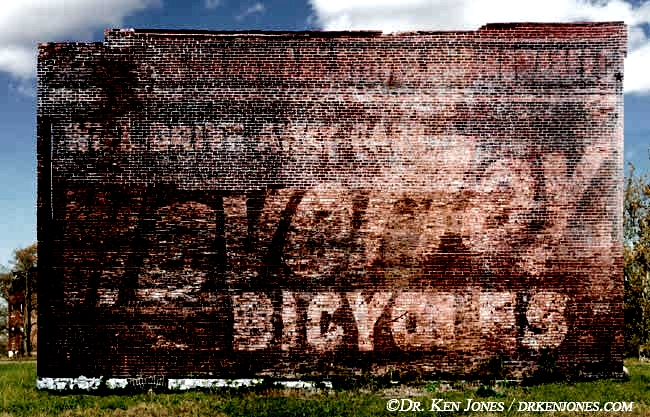 I don’t remember how I linked into the American Ghosts photography site of Dr. Ken Jones, but it’s incredible. Among the hundreds of ghost signs he’s photographed just in Missouri and tucked among the signs for shoes, flour, bakeries and hat stores was one for bicycles. It read, “Waverly Bicycles, Will Drive Away Care”. So cool. As I clicked on another photo, I realized that knew where to find this sign. It’s in The Grove neighborhood. Perfect. 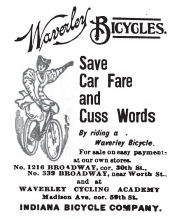 Waverly Bicycles were the product of the Indiana Bicycle Company, founded in Indianapolis in 1886. A decade later, the company built a large manufacturing plant and produced 350 bicycles every 10 hours. Their popular Waverly brand bicycle cost about $60 then, roughly $1,500 today. Following the “bicycle craze” of the 1890s, automobiles quickly gained in popularity. The Indiana Bicycle Company became the American Bicycle Company, then the International Motor Car Company before joining the Pope Motor Car Company.

So when was the ghost sign in The Grove painted? Waverly advertisements I was able to locate all date to the late 1890’s, which offers a solid idea. The sign obviously went up before “driving” was widely used to describe automobile travel. The building itself dates from the 1880s and sits on Race Course Avenue. The street name is the only remnant of a horse racing track built on the then outskirts of the city, operating from 1865-69, well before the surrounding neighborhood was developed in the early 1900s.

Back to the poster: I drove to Race Course Avenue and snapped a few photos. The opportunity was especially fortuitous when I realized that until 2007, adjacent buildings had hidden the bottom half of the sign and the deteriorating condition of the remaining building may mean its days are numbered. The owner of the building and vacant lots resides in South County. A sign advertising “3 Buildings & Lot” still hangs on the remaining storefront more than five years since two were demolished. 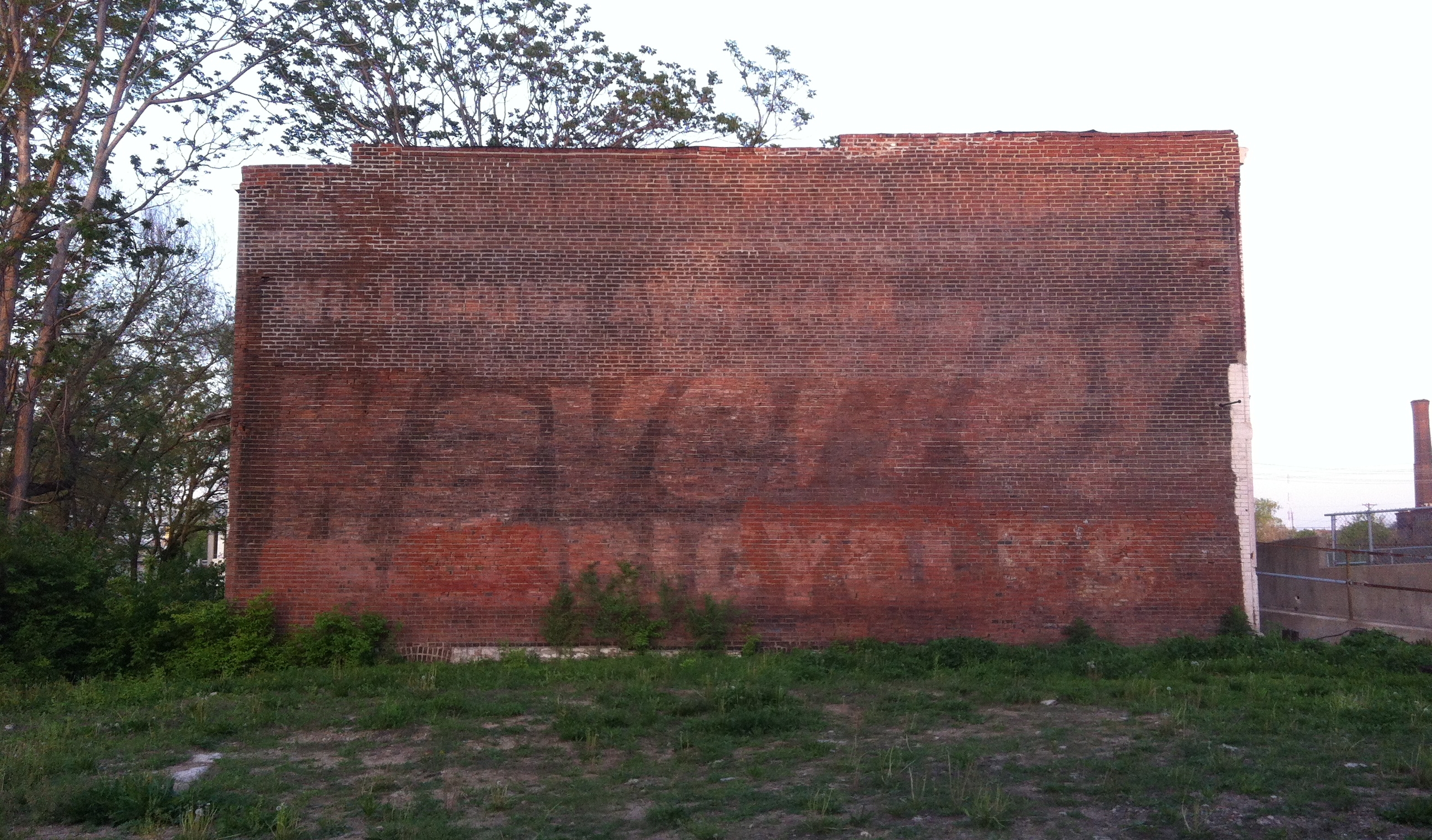 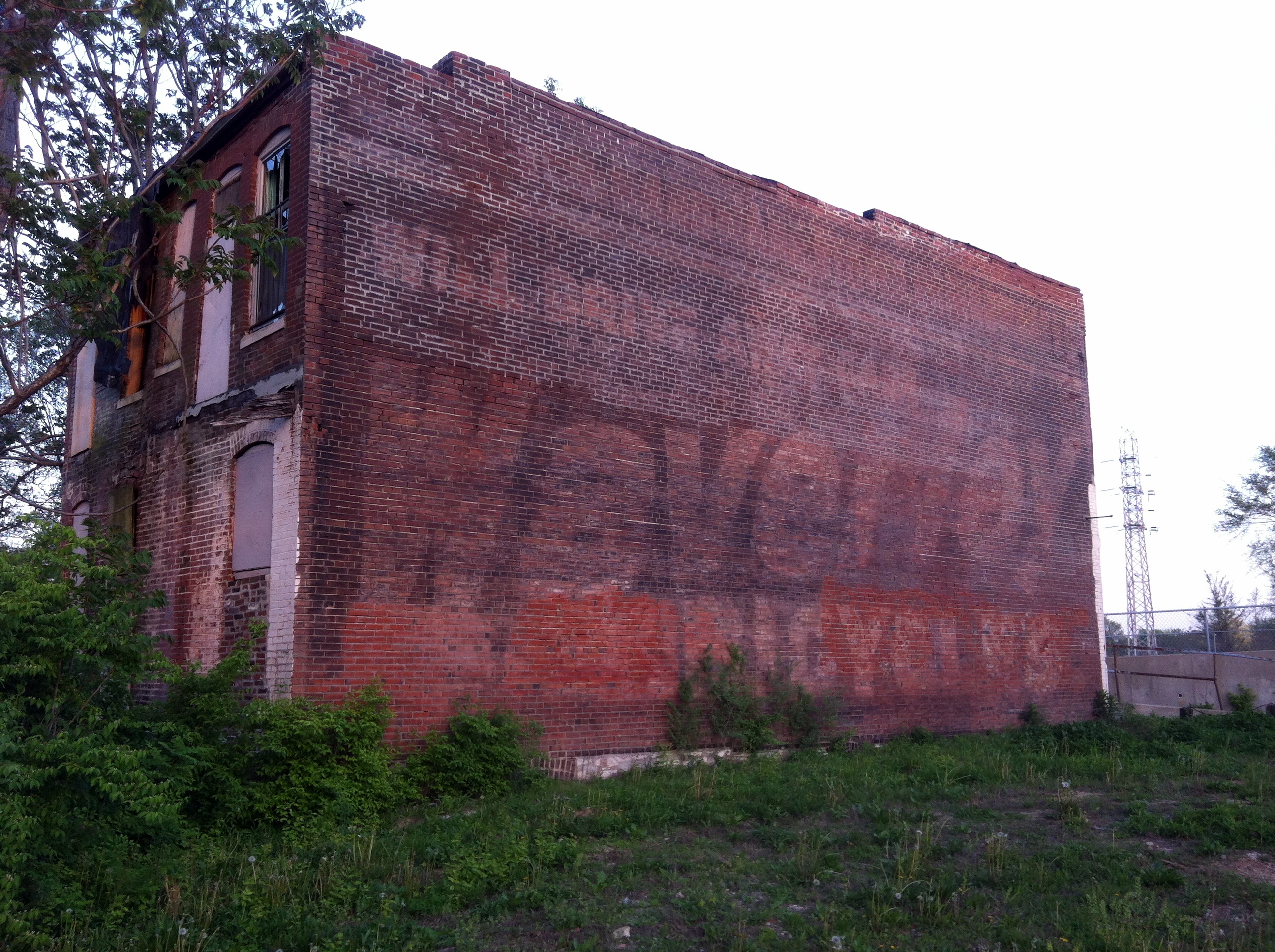 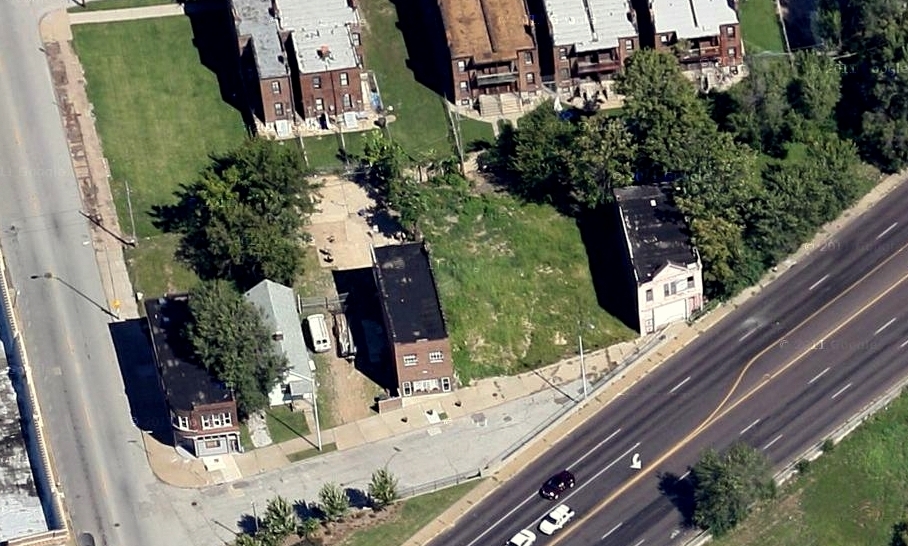 {site as it is today – ghost sign building is center-right}

I followed the same process of last year’s poster. I’m attracted to the theme of tying cycling to the built environment and history of St. Louis. I tried a few other colors, but the blue, brick and yellow has stuck. As opposed to last year, the square dimensions seem to work best with the image. For what it’s worth, last year’s poster sold out quickly, so if you like what you see (just a sneak peek until the opening), be sure to get to the Atomic Cowboy early. 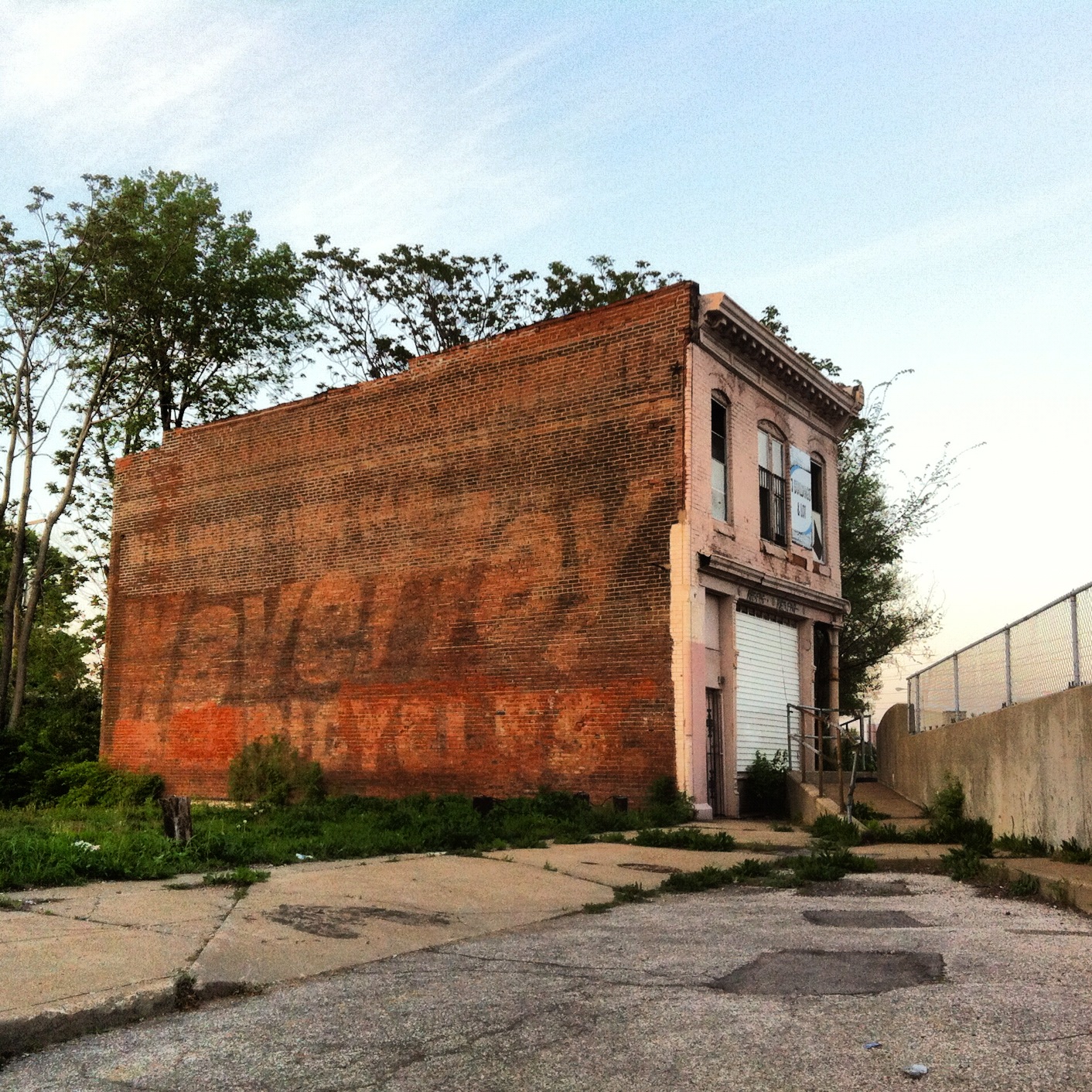 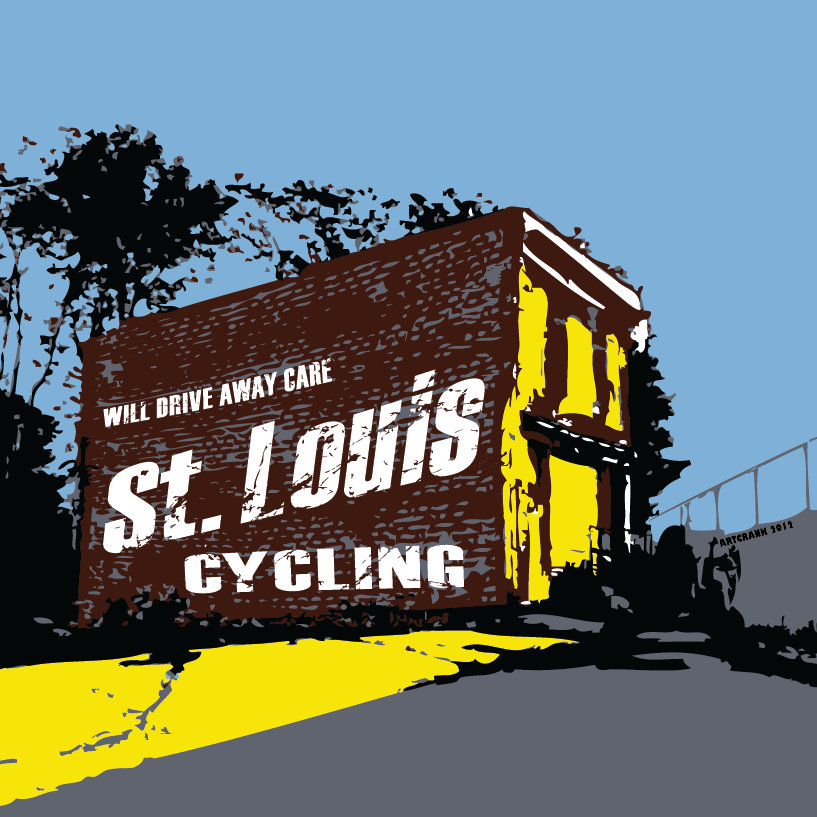