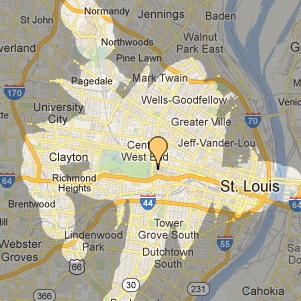 This is a small point, but highlights the severe shortcomings of pop-urbanism such as The Atlantic Cities online effort. Today they posted a short piece titled "30 Minutes on Mass Transit in 20 World Cities", ostensibly showing how far one could travel with a transit pass and 30 minutes. The comparative maps were produced in Mapnificent, a site that allows the user to map a starting point and areas accessible via mass transit for a set number of minutes.

There are several caveats, your bus or train leaving on time, etc. but, the story states, "maps were captured at roughly the same scale to offer comparisons between places". "Miami, for example, offers a pretty tight window on the world." St. Louis shows a very similar accessibility footprint. The problem is that Mapnificent uses a generic drop point, wherever it appears when typing a city name into Google Maps. This address in St. Louis is 3509 Cozens Avenue, near the intersection of Cass Avenue and N. Grand Boulevard.

This issue isn't whether this location is in North St. Louis, St. Louis or elsewhere, but that it isn't near any transit hub in the metro region. The map offered by The Atlantic Cities doesn't show what it purports to show. The post ends, "So if you ever find yourself with a bus token and a half hour in any of these cities, you'll know you've got some options."

Wouldn't it make more sense to start at either the multi-modal transit hub in downtown St. Louis, or possibly at the busiest light rail station and adjacent bus transfer hub in the Central West End neighborhood? Doing so would be much more informative to the vast majority of visitors and residents who may be interested in the information and how it compares with other places. Persumably similar issues exist with maps of other cities.