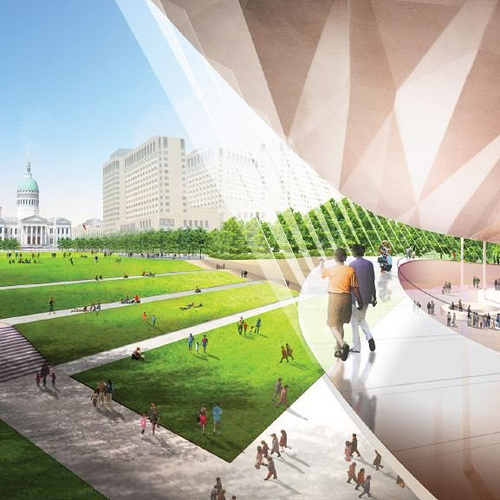 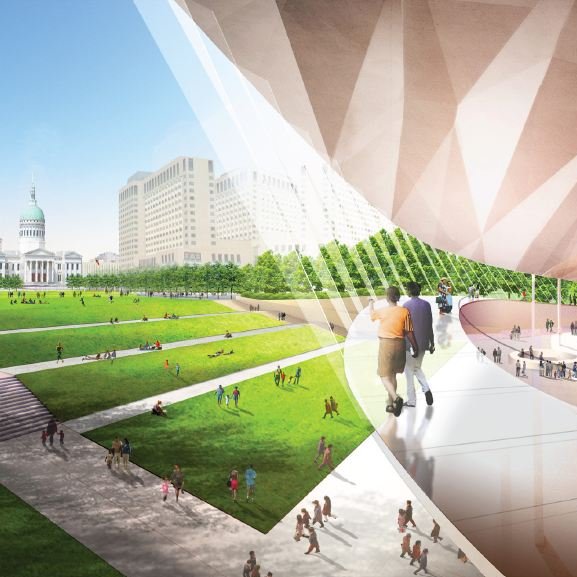 If Civic Progress, CityArchRiver2015 Foundation, City of St. Louis Mayor Francis Slay and St. Louis County Executive Charlie Dooley get their way, we’ll all by paying an additional 0.1875% sales tax in the near future. Why? A quiet addition to a bill in the state legislature would put the tax increase to a popular vote, with proceeds providing funds to issue $120M in bonds for the Arch grounds renovation project and additional funding for regional parks and trails.

The Post-Dispatch only gets at a small part of the issue when the editorial board takes exception to how the bill was introduced in the state legislature, offering a rather soft rebuke. The editorial glad hands project organizers, stating that they “have taken great pains to share their vision with citizens (and) seek input on new designs.” This simply is not true. The design as it stands is not the result of public input. (Who decided it is a good idea to remove eight blocks of city streets to “better connect” the city to the riverfront?)

In addition to the initial legislative process, the initiative itself is flawed and represents a bait and switch by project organizers. To date, the source of funding has been intentionally vague, most often described as “a combination of government and private sources.” Additional detail sometimes included mention of “foundations, companies and individuals.” While not definitively ruling out the option, that clearly doesn’t sound like a local sales tax.

An enormously beautiful transformation of the Arch grounds and riverfront has been whittled away. Long gone are many of the elements that made the initial plan exciting: an increased pedestrian zone on the Eads Bridge, a pedestrian bridge adjacent to the Poplar Street Bridge, east side improvements, water gauges in the Mississippi, Cathedral Square with a restaurant and event space, an expansive new entry to the Museum of Westward Expansion… All replaced with more highway infrastructure, closing city streets and a price tag that’s doubled. We’ve gone from truly transformational vision to be paid for by federal, state and private funds, to a vastly underwhelming (and in some cases simply bad) design to be paid for in large part by increasing local taxes.

Revenue from the new tax provision would fund local parks in the City of St. Louis and St. Louis and St. Charles counties in addition to the Arch grounds project. Just four months ago, the City of St. Louis passed a $64M parks bond issue. The major selling point on the bond issue was two-fold: the new funding would not require a tax increase and would serve to leverage a $100M fundraising campaign by Forest Park Forever. St. Louis County is experiencing its own park funding drama. Where’s the leadership? Where’s the community engagement? Where’s the vision for our parks? All three should be prerequisites for even introducing the option of introducing a vote on a tax increase.

So why the proposed tax increase? It’s simple math. The Arch project cost stands at $553M. The hope that federal and state funds would be made available for the project has evaporated. A TIGER III grant provided $22M and MoDOT has dedicated $25M in state highway funds. Add to that the $15M put up by Great Rivers Greenway (GRG) and you very nearly have the sum total raised to-date: $62M. What’s left? Levy a local tax. Tying it to ballot measure that in short asks residents if they want to fund their local parks (oh by the way, we’ll take $200M+ in total taxes to pay the bond issue for the Arch grounds), is at once smart and devious. The GRG commitment would be repaid and more if the measure passes.

In 2010, the existing tax created in 1999, provided  $10,799,815 to GRG. The new tax would give 60% of revenue to GRG with half of that to be allocated to the Arch project, and the remaining 40% to be split between local park districts. GRG is a great organization and has completed some great projects. What’s missing entirely, however, is a public discussion regarding funding and projects. A case for need has not been made, neither by CityArchRiver, GRG, or anyone else. A time for that will come, supporters say, once a few hurdles are crossed.

And this is how we do things. We’re told not to worry, the measure might have been tucked into an existing bill winding through the Missouri state legislature, but it only authorizes jurisdictions to put it on the ballot if they chose to. What’s the harm? City of St. Louis Mayor Francis Slay recently Tweeted, “A bill to help fund parks and the Arch grounds is in Jeff City. STL Beacon lists the hurdles.” and linked to the Beacon story. Focusing on the hurdles is another way to brush off any discussion of whether it’s a good idea. We’re told, don’t worry, it’s just a first step and there are so many hurdles and… We can’t know at this point if the measure will ultimately be put to a vote and pass, but anyone who believes that the bill’s supporters would ever consider returning to the first step to engage the public is wrong. At the same time we’re being told not to take the issue too seriously, supporters call the effort “a huge part” of getting the Arch project completed.

It is estimated that the tax would generate $38M per year if passed in the City of St. Louis ($6.2M), St. Louis County ($24.9M) and St. Charles County ($7.2M). The levy would only go into effect if 2 of 3 counties approved the measure. Given the numbers, clearly St. Louis County would need to be one of them. It’s no stretch to say the tax will be most difficult to pass in St. Charles County, leaving the burden on the central metro area. Ultimately, county councils, and the city’s Board of Aldermen will decide whether to put the issue to the public. If successful, supporters hope to introduce the bill to St. Claire and Madison Counties in the metro east.

At the heart of the issue is the challenge of an urban National Park. No one would expect Wyoming residents pay for Yellowstone, but the core of our metro region is going to be asked to cough up more than $200M for the Arch project and millions more for GRG and other parks. Needless to say, the national park itself isn’t working well for the city and has been especially detrimental to business development immediately next to what should be a magnet for cafes, corporate headquarters and more. The Arch grounds investment is predicated on attracting more visitors to the Arch each year as attendance has flagged. It’s a “heads on beds” strategy that attempts to fight nationwide macro-trends of museum and destination attraction attendance decline. It’s an unproved strategy that’s been invoked for every massive redevelopment project in the city’s history.

Perhaps CityArchRiver should be applauded for tackling an effort that may have been doomed from the start, one the Danforth Foundation abandoned after years of effort. If the NPS refuses to allow the earth to be moved two feet, how is a new museum entrance to be constructed? Then again, why would one solicit expansive and radical plans in that case? The adherence to an October 2015 deadline has been accepted as the only way to keep the many constituent groups moving forward, but is now beginning to look more and more as a date that will be known for what wasn’t completed. Now the rush is on the get the tax measure on this November’s ballot to secure funding for at least part of the project. This highlights to lack of process created and the blind devotion to silver bullet planning projects St. Louis can’t seem to quit. It may be the project itself more than the execution, but it’s difficult to see the current plans as anything more than throwing good money after bad.