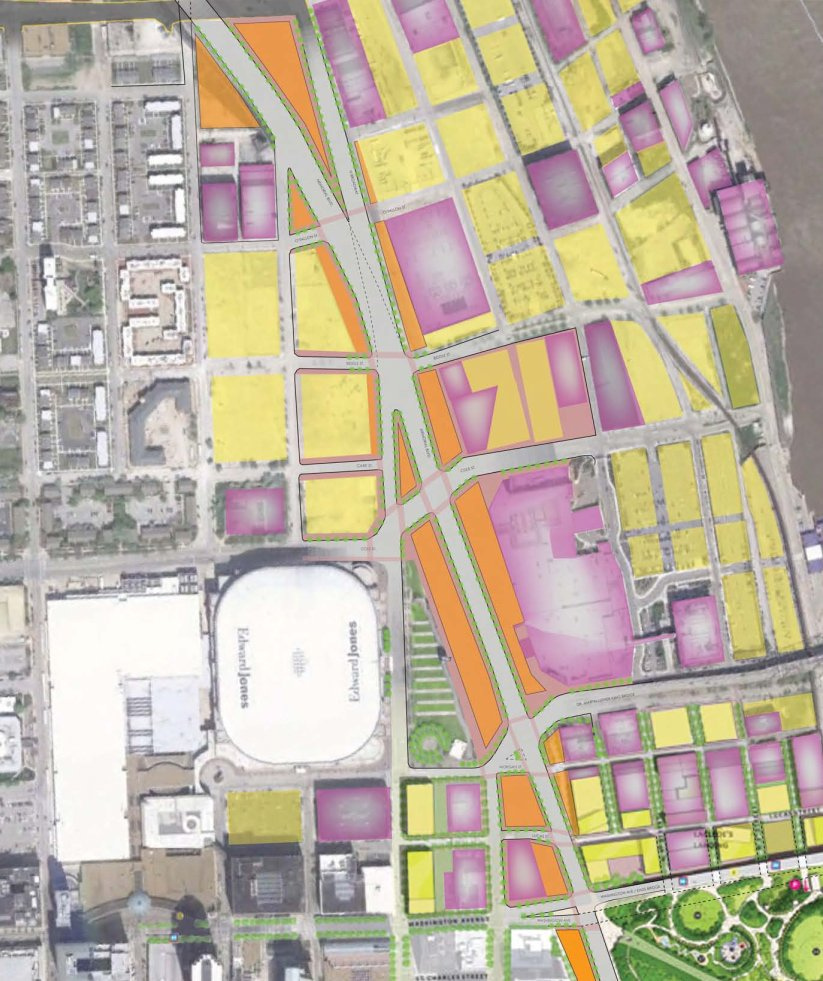 Removing an Interstate highway is necessarily a long and deliberate process, but events have quickly conspired in St. Louis to push the proposed conversion of 1-mile of I-70 separating the city from its historic riverfront and iconic Arch from urbanist dream to planning possibility. Friday, the city's development corporation released its "Request for Proposals for Downtown Multimodal Access Study". The bland-titled 22-page document contains the most significant step forward in the effort convert the Interstate to an urban boulevard:

In particular, address the potential removal of the elevated sections of I-70 from north of Pine St. to O’Fallon St, to determine feasibility and traffic impacts should the elevated sections be completely removed, brought to grade, and what various alternatives might be considered for this scenario to occur long-term. 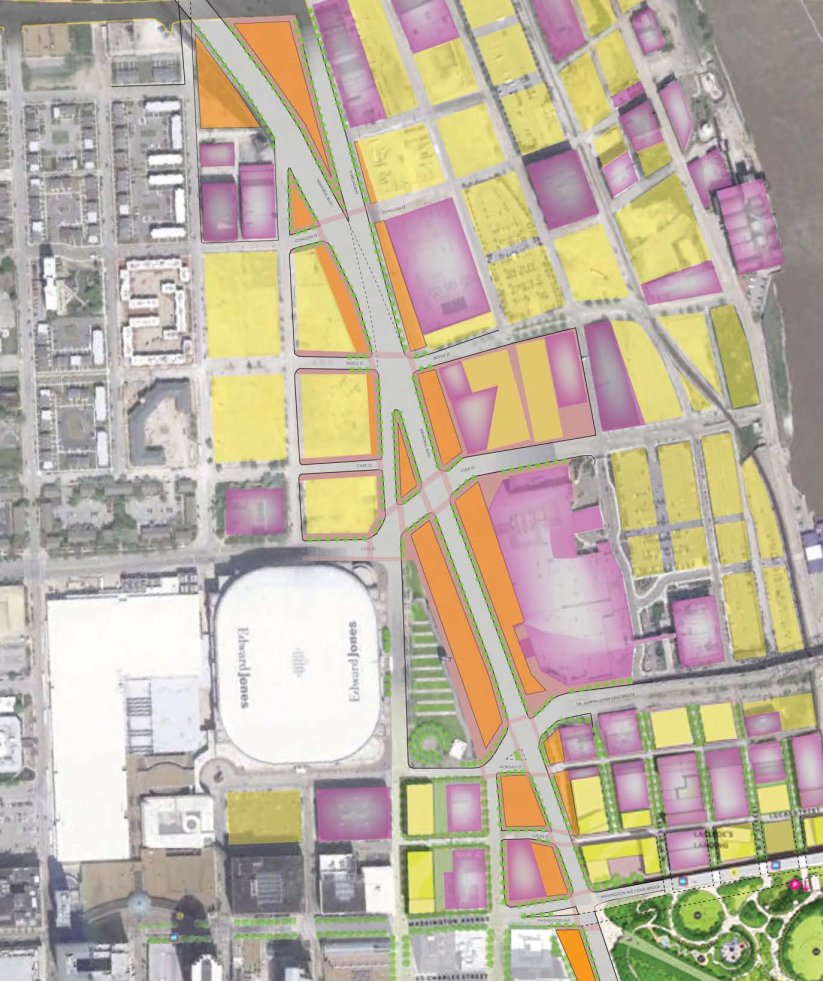 The urban Interstate was constructed at the same time as the Arch in 1965, cutting off the 91-acre park from the city before it was ever completed. The aging Interstate and the challenge of activating an urban national park recently led to yet another attempt to redefine the city's riverfront. In 2009, the National Park Service completed an overdue general management plan, the first in the park's history. While proposing various options, the plan stated that the NPS “prefers and strongly supports the removal of the Interstate highway" adjacent to the Arch. At about the same time, it was announced that the long sought bridge across the Mississippi River at St. Louis, the first in nearly five decades, would be built to carry I-70 north of downtown. The bridge broke ground in April, 2010 and is scheduled to be completed in early 2015. 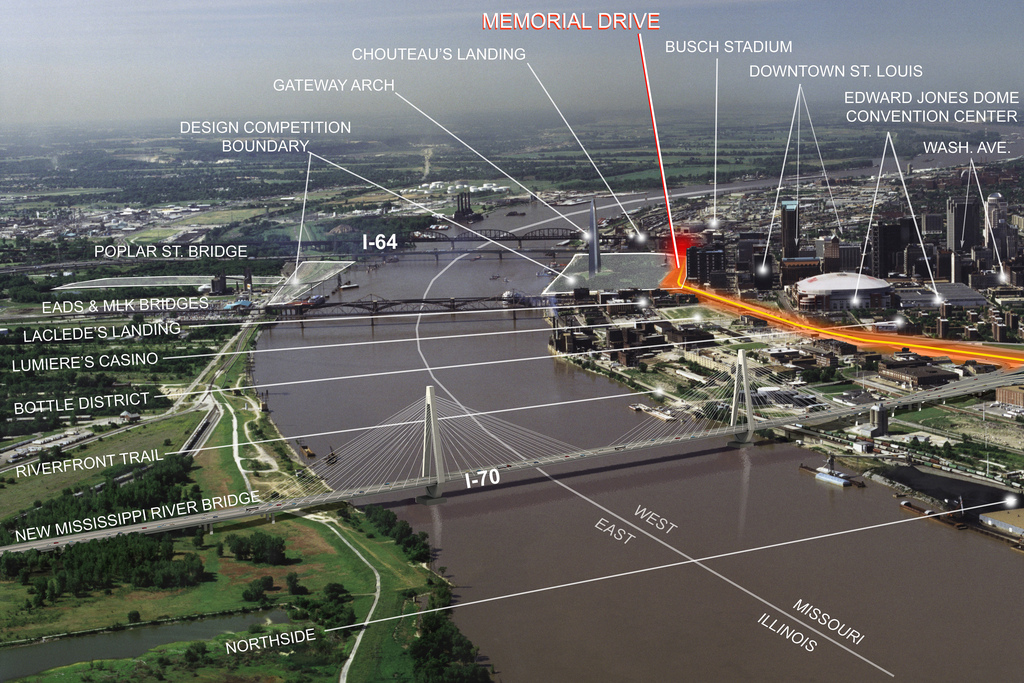 {the new Mississippi River Bridge will reroute I-70 north of downtown St. Louis, existing I-70 is highlighted in orange} 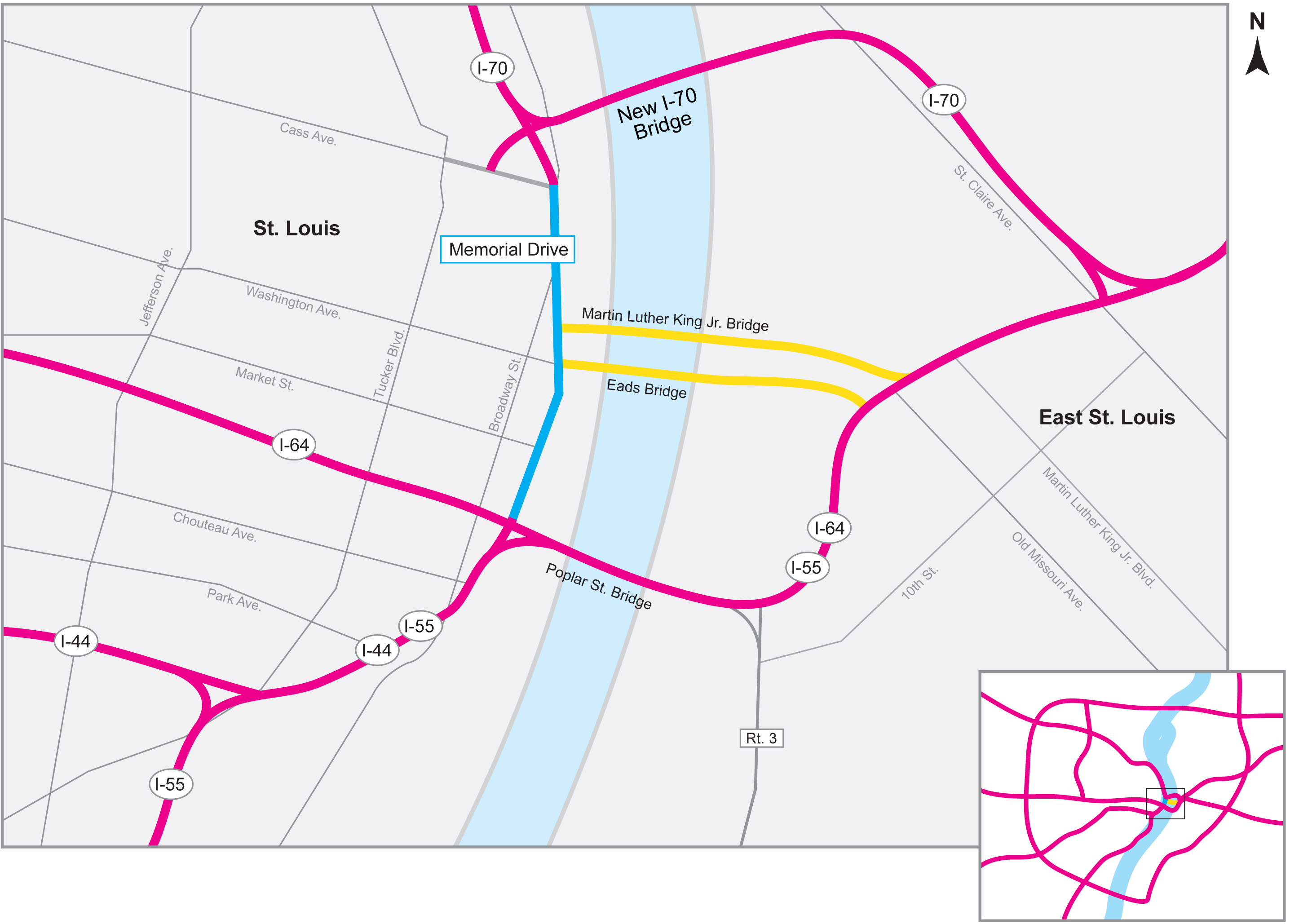 {I-70 will soon be rerouted north of downtown St. Louis}

During the public input phase of the NPS general management plan, a group of St. Louis residents formed City to River and began pushing for better connections between the communities of the central riverfront and the Mississippi (I currently serve as the Chair of City to River). The removal of 1.4 miles of I-70 in downtown St. Louis in support of the NPS has been a central focus of the group ever since. As a citizen's advocacy organization, City to River aimed to "upload" the idea to regional policymakers. In the meantime, the half-billion dollar Lumiere Casino adjacent to the elevated I-70 would spend $8M on "Lumiere Link", a 400-foot tunnel with moving walkway underneath the Interstate to connect the casino to downtown.

Soon after the general management plan was completed, an international design competition was announced. Titled "Framing a Modern Masterpiece", the ongoing effort led by the non-profit CityArchRiver 2015 Foundation, seeks to mitigate what has been called the "crushing maze of infrastructure" surrounding the Arch and "weave connections and transitions from the City and the Arch grounds to the River". This group successfully solicited design proposals from many of the brightest architects, landscape architects, and designers from around the world, including Skidmore, Owings & Merrill (SOM), Michael Van Valkenburg (MVVA), Weiss-Manfredi, BIG, PWP, Behnisch and others. (MVVA would end up winning the design competition and is currently engaged in redesigning the park.) 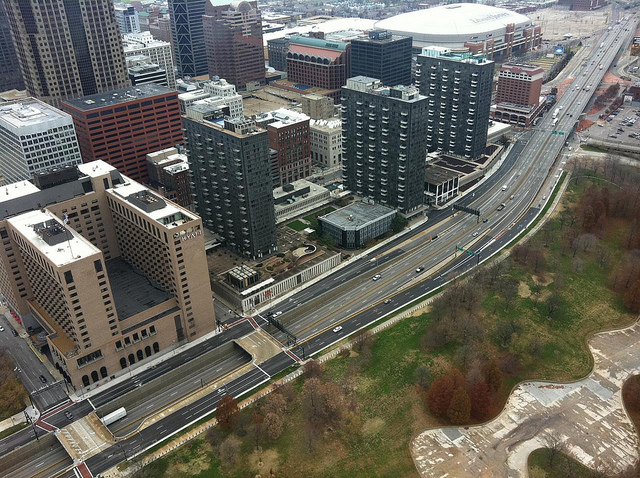 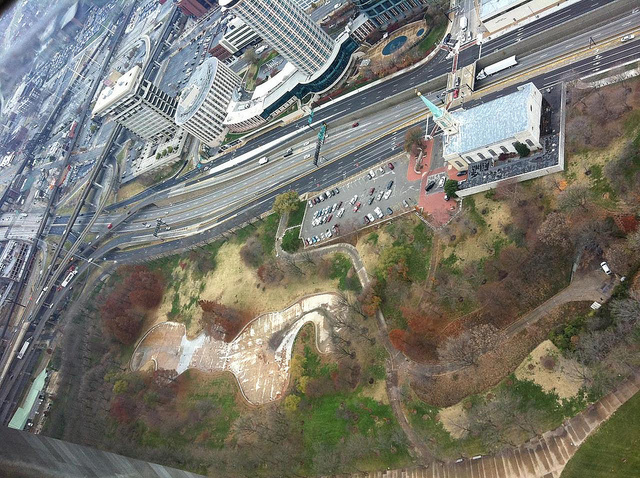 The St. Louis Post-Dispatch editorial board strongly supported the removal of I-70 downtown. City to River solicited endorsements to study highway removal from downtown stakeholders and received overwhelming support from the St. Louis Convention and Visitor's Commission, hotel owners, business associations and the public. The organization lobbied the competition design teams to include highway removal as an option. In the end, each of the final five design teams concluded that the preferred design solution would be the removal of I-70. Development Strategies, a real estate, community and economic development consultant firm estimated that removing I-70 and replacing it with an urban boulevard would created more than $1.1B in new development opportunities for the city.

In 2010, this section of I-70 appeared on the Congress for New Urbanism (CNU) list of of "Freeways without Futures". CNU quoted the Missouri Department of Transportation as stating, "the downtown lanes [of I-70] are one of the least traveled sections of interstate in the Saint Louis area… With the rerouting of I-70 it is probable that that amount of traffic (approximately 70,000 vehicles per day) could be reduced by greater than 50%". The effort to study urban Interstate removal in St. Louis was on a roll. When the NPS took public comments regarding the Arch grounds design plans, 119 of 123 comments advocated for the study of removing I-70. 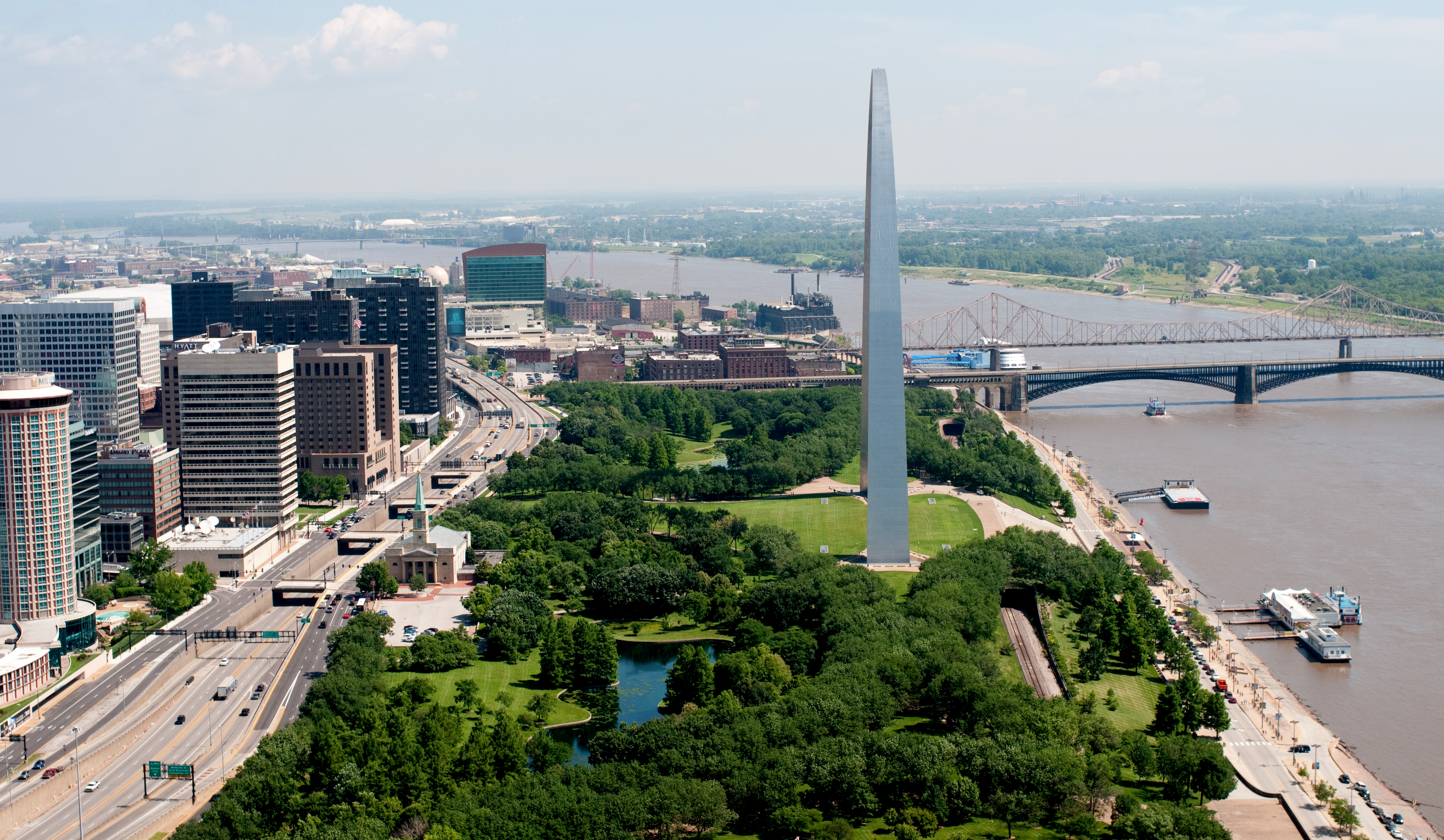 Studying highway removal had the support of the downtown business community and the public, however, not a single politician or policymaker had voiced public support for the idea. The CityArchRiver Foundation focused on its goal of improving the Arch grounds by the 50th anniversary of the monument's completion, October 2015, and highway removal would just take too long. The incredible complexity of altering an urban national park, and one that borders not only an Interstate highway, but the second busiest inland port in the country, produced a fragile process with an incredible array of stakeholders. There was concern that taking on anything more could lead to nothing being accomplished.

Advocates continued to work publicly and privately to drive the conversation forward. It was understood that any serious effort would need to be managed by the East-West Gateway Council of Governments (EWG), the state and federal designated metropolitan area planning organization. EWG represents three counties in metro-east Illinois and four in Missouri. Without their involvement, any study of highway removal would likely be dismissed as incomplete or not representative of broader regional interests.

Now, the study of removing a portion of I-70 in downtown St. Louis is an official component of a sought-after Riverfront Connection Plan as part of a larger St. Louis Regional Sustainable Communities Plan, managed by EWG. It's currently only one of many components in a just released RFP, but this step represents the most important step forward to-date in considering the conversion of I-70 to an urban boulevard. As Tim Logan wrote in his Post-Dispatch online report, "these things don't happen without lots of study, so this is a first step. And that's the only way to start getting anyplace." 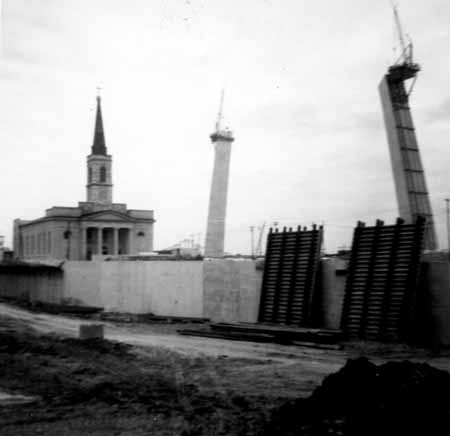