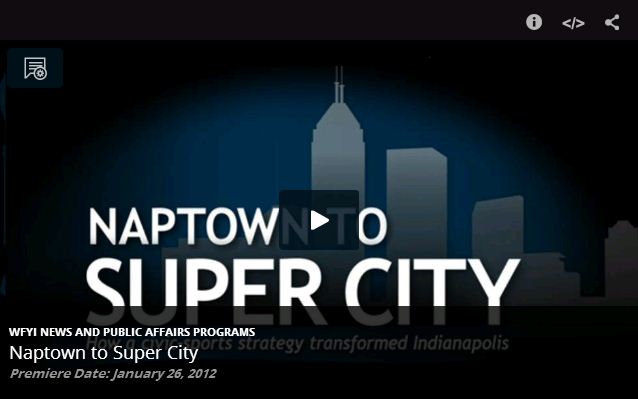 I grew up in Indiana, when to school in Indiana, Indianapolis is my home (big) town. I watched Razor Shines play at Bush Stadium for the Indians, sat in traffic at 3:00 a.m. to park on the infield for the 500, have competed on the Major Taylor Velodrome and burned a more than a few calories on a stationary bike making light bulbs glow at the Children’s Museum. I think Indy’s a nice place. Because I believe that cities can and should learn from one another, I’ve more than once suggested St. Louis should pay attention to the Circle City.

This week everyone’s paying attention to Indianapolis as it plays host to Super Bowl XLVI. As part of the civic celebration, the Indianapolis Star and WFYI have produced “From Naptown to Super City”, an hour documentary on the city’s transformation into a mecca for major sporting events. It’s a proverbial “must see” for those interested in Indy, city development and growth strategies. The film even does an admirable job including voices of dissent within the overwhelming boosterism one would expect.

The civic pride, and the personal pride of those who have been long committed to a sports strategy is understandable and serves up the usual suspect soundbites in urban development, a selection: “If we hadn’t done the sports over here, we wouldn’t have had the economic development over here.” “I’m not sure we would have done the violin competition if we hadn’t done the sports festival.” “We’re not in it for the sports, per se, we’re in it for the community, sometimes that’s exposure (SI cover), sometimes that’s heads in bed (hotel revenue), sometimes that’s building sports venues.”

“The world is astounded that we have the Super Bowl.” Was the world astounded when Detroit got the Super Bowl? What about Phoenix? One person says of Indy, “We had the (Indy) 500 and minor league football and baseball and other than that there was nothing to energize people. It’s a sports-centric view that wasn’t true then and isn’t true today. There’s no doubt whatsoever that Indianapolis has successfully corralled the amateur sports world. How it got there is the subject of “Naptown to Super City”. Its true impact and opportunity cost is a topic for another time.

The film itself is getting some attention. Aaron Renn, over at his urbanophile.com site, an absolute must read for analysis of urban trends and development, unfortunately shortarms his analysis here. In the film and in his analysis there’s quite a lot of “the sports strategy was a smart idea because it’s worked” statements. Renn writes, “(the sports strategy) was an initiative that had the possibility of being truly transformative for the city. Again, I know this is true because it was.”

It’s not quite this simple, and I don’t wish to be overly reductionist here, but Indy has the Super Bowl because they built a $720M football palace. Why did they build a $720M football palace? Because the local non-profit behemoth the Lilly Foundation (Eli Lilly and Company) largely funded the football stadium that brought the Colts to Indianapolis in 1984. Sure it’s more complicated than that, but It’s really amazing that Renn doesn’t once mention the Lilly Foundation in his analysis.

Lilly also funded the natatorium, track and field stadium, velodrome, tennis center and other sports facilities. It’s fine to say that the sport strategy was smart because it worked and that it succeeded because “it was backed up with very intelligent execution.” It great to point out that the Indianapolis Sports Corporation was founded. Without Lilly’s millions it would have come to nothing. Regrettably, I can say that a better analysis is offered by Forbes, which cites “a powerful sugar daddy” and “dumb luck”, in addition to other factors.

There’s a formula for the civic pride turnaround story: First, proclaim how incredibly awful your city once was, how no one ever wanted to be there for any reason, how everything closed at 5:00pm, how you could linger in the middle of streets without interfering with traffic, how there was nothing to do. Second, insert quaint anecdote – could be pigeon hunting (Indianapolis), or filming Escape from New York (St. Louis), or your river catching on fire (Cleveland). You highlight the worst of the past and the best of the present. Voila, a remarkable, incomparable, improbable success story, a “wonderville on the prairie.”

So whatever the transformation has been, how has it come about? Three things:

The film isn’t entirely a Chamber of Commerce (meaning booster) production. A final dissent is registered by former Indiana State Representative Louis Mahern, an original and long-time supporter of the Indy “sports strategy” regarding the community’s decision to double-down on the Colts and build Lucas Oil Stadium. “No one wants to be the mayor that lost the Colts, and the Colts know that, and the mayor knows that, and the Colts know the mayor knows that. Just once, I’d like to see some mayor in some major city tell ’em to stick it.”

Indianapolis has clearly improved since the 1960s and even the 1980s when I began spending time there, even though my first memorable experience, Union Station Marketplace (think fudge, indoor mini golf, food courts and model train shops)  is basically a hotel and offices now (very similar experience to the St. Louis Union Station). Nearly all Midwest cities are cleaner and more lively now than in 1960. Columbus, OH is a nice city as well. Cincinnati has had its own relative revival. St. Louis too. Sports, and amateur sports particularly, were Indy’s road to revitalization, but it remains only part of the story. “Naptown to Super City” is two parts urban renewal myth and one part civic history lesson.