For anyone following the Arch grounds project, the reality that the winning design (itself much less ambitious than other finalists) was being scaled back in significant ways isn’t news. That some elements will not be completed by 2015 has long been stated on nextSTL. So yesterday’s apparent gaffe by the Jefferson National Expansion Memorial superintendent may be noteworthy, but isn’t surprising, “On January 24th we’re going to go back to the public and tell you where we are today. You’re going to see a scaled down, leaner project.”

But that’s not the problem, the real issue with the ongoing Arch grounds revitalization effort is a mismatch of expectations. That the end result may fail to excite the urbanist dreamers amongst us (me included), isn’t entirely our own fault. An international landscape architecture competition was meant to raise the profile of the endeavor. It did. The competition was meant to attract the best talent from around the world. It did. All competition caveats aside, when Michael Van Valkenburgh Associates was named the design winner, people expected something transformative.

From there, what went wrong? Well, the economy to be sure. There isn’t the type of federal and state funding available to complete an expensive, comprehensive restyling of the entire 90 acre site. Then there’s the incredible complex overlapping jurisdictions involved. It’s an enormous achievement that the CityArchRiver2015 Foundation has been able to bring everyone to the table, but to offer just one example, the Archdiocese was simply never going to let the basilica be framed by a Europeanesque square and a full-service restaurant. Whatever improvements are coming (and unless the entire effort is drastically scaled back, there will be several), the continued drastic mismatch of expectations is going to be difficult to address.

No matter how transformative, many saw the MVVA winning design was much less ambitious that others and thus as the first scaling down. The first update to the public in January 2011 was a significantly scaled down version from the winning design, which was never meant to be a final design. Gone from that update was a significant cathedral square, most of the south end and east side investments, water gauges in the river and more.

The latest appears to be a heavily altered “lid” across I-70, a significant alteration to city streets and a revision of existing pedestrian connections. The winning design showed an open plaza at Smith Square, a substantial median in Memorial Drive as an effective pedestrian refuge, the revision showed a closed Memorial Drive and a sculpted lid with continuous allees and pedestrian walkways and now we’re presented with a much more basic Smith square and disjointed pedestrian experience. The new westward entrance to the Museum of Westward Expansion is offered as well.

All of this has been planned, revised, revised again, solidified with a federal TIGER grant and commitment of MoDOT funds before being officially presented to the public. This is of course another story altogether. For now, let’s take a look at how the signature moment of the nearly $600M revitalization effort, Smith Square and the “lid” have evolved: 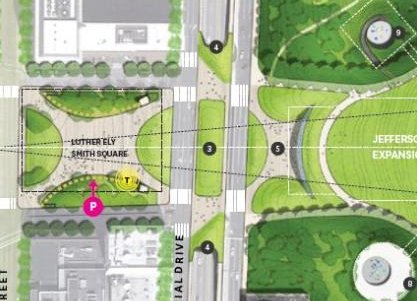 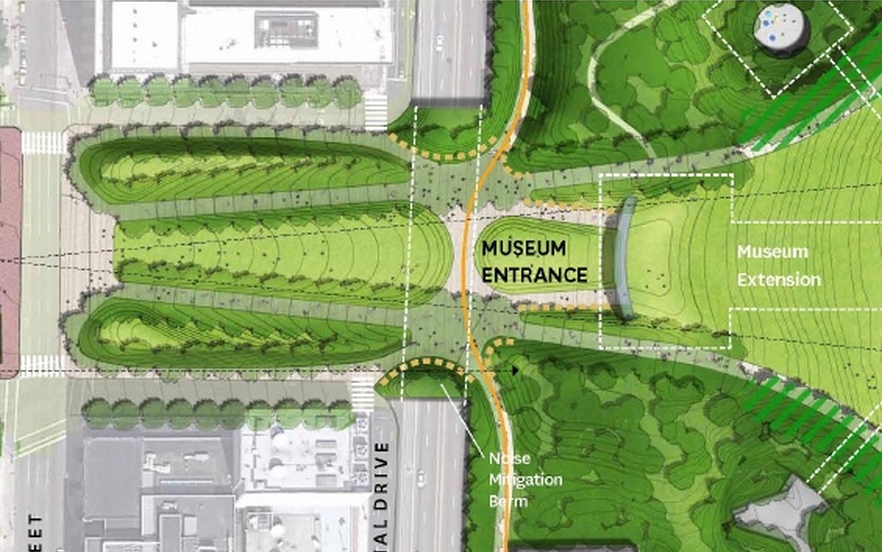 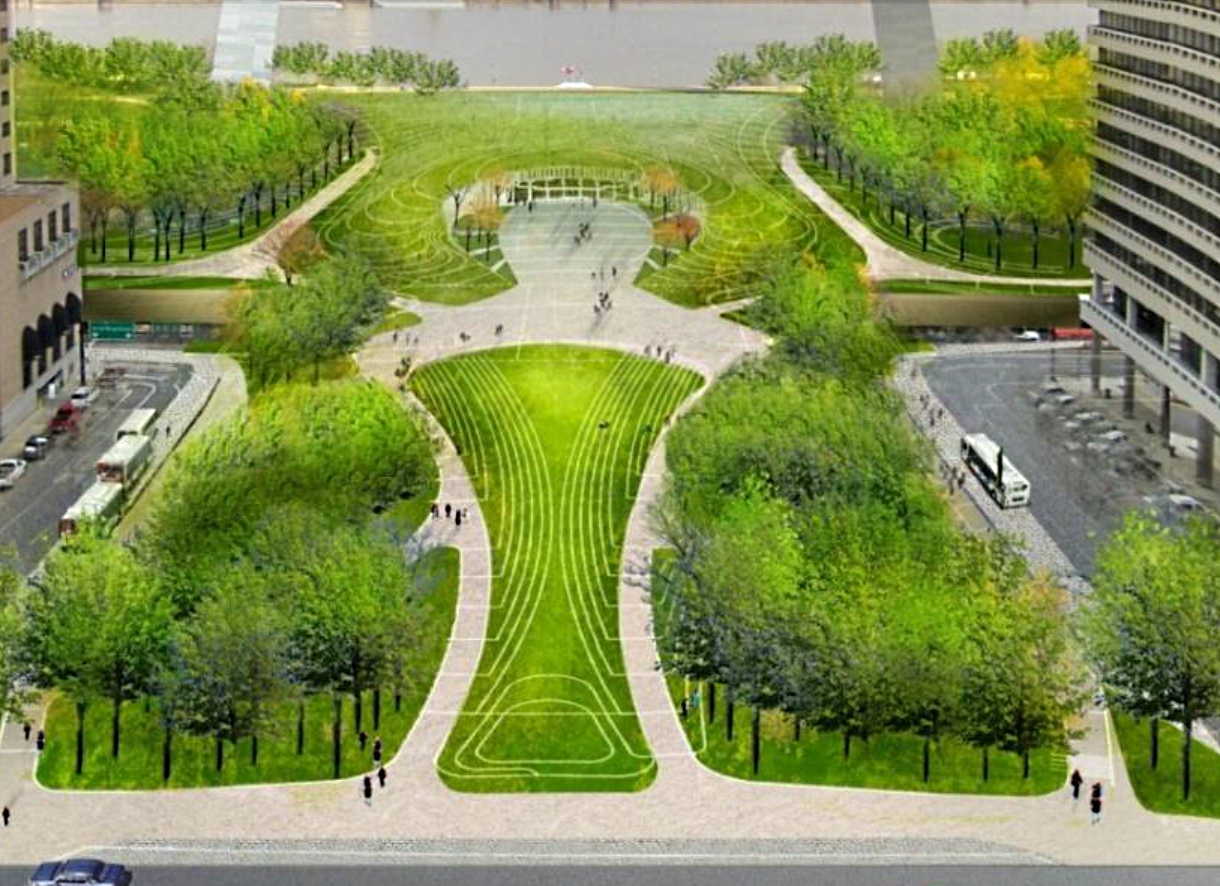 The Danforth Foundation report from the previous effort to better connect downtown to the Arch is becoming more and more prescient. The report found that a desired three-block lid was not feasible as it would be classified as a tunnel, requiring substantial maintenance infrastructure and cost. The report also concluded that a one-block lid was not desirable:

“The unfortunate fact is, however, that even this most ambitious of the “fallback” (one-block) designs fall short on grandeur and impact. The depressed lanes of I-70 would remain mostly uncovered, producing noise, fumes and visual pollution.” The final conclusion should have offered a more clear guide for current efforts. “The Foundation is disappointed with this conclusion but believes it is crucial that our community have a thorough and realistic understanding of what is feasible under current constraints.”