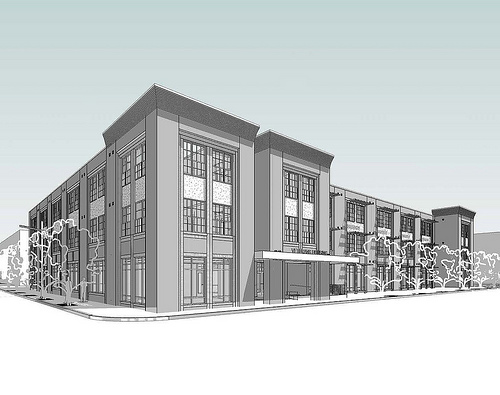 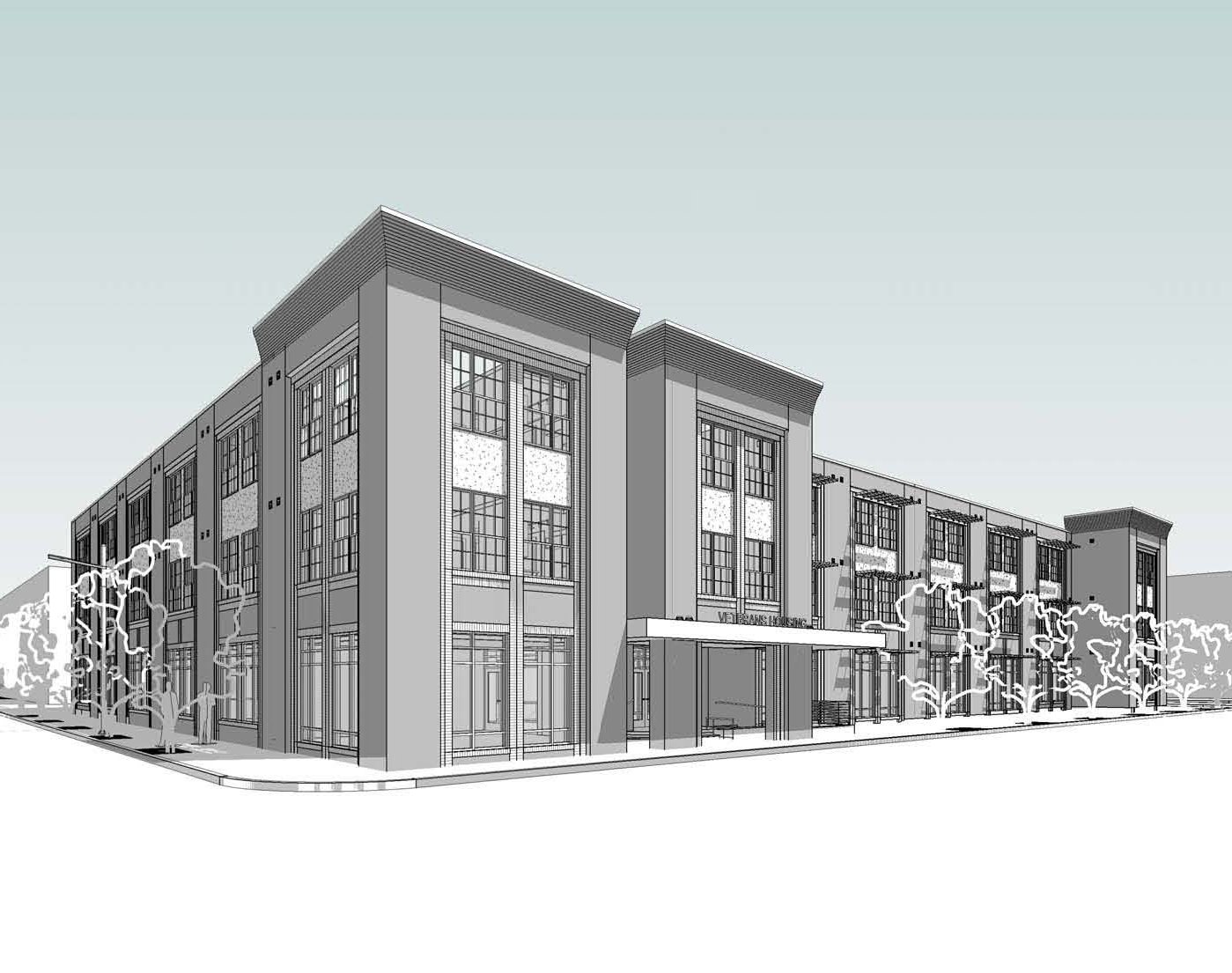 As reported in the St. Louis Post-Dispatch this past month, a proposal by the Salvation Army to build low-income housing targeted towards homeless veterans has been met with some resistance from neighboring businesses. Shown in the project rendering, a three-story, 48-unit building would occupy the southwest corner of Locust and Garrison.

The P-D's David Hunn reported on the Board of Aldermen Housing Committee hearing on the proposed development via his Twitter account today, reporting that a local business owner complained the project would be "disruptive to (the) urban environment," that he "wants to create a walkable neighborhood" and is "worried housing will 'disrupt the flow'." Is this Midtown NIMBYism or an accurate concern?

The specific contentious issues here are these: businesses have suggested the project move to the northwest, instead of southwest, corner of the block so that commercial development can continue along Locust – the Salvation Army says the project is too far along to make that change – an unfortunate and dubious claim. Businesses have also expressed doubt regarding the proposed mix of veteran and other low-income housing. The Salvation Army has stated that at least 36 of the 48 units will be reserved for homeless veterans, but there is nothing that would prevent all apartments to be occupied by non-veterans. Business owners have seemingly drawn a line between homeless veterans and homeless non-veterans.

Property owner Mark Wegmann, a significant contributor to the area recent commercial success went so far as to predict failure of the project if changes are not made. From the P-D article: "The current locations of the components of the project will cause the project to fail and have an adverse effect on the property values of the adjacent properties, including my own." It's difficult to understand how the housing portion itself, or the entire project, would fail because this phase fronts Locust. Would 48 low-income apartments, veteran occupied, or not, decrease property values more than a vacant lot(s)?

The Salvation Army has demonstrated the need for additional homeless veteran housing. The Days Inn conversion to the Washington Avenue Apartments downtown has been a success. Other similar projects continue to work well, such as the New England Center for Homeless Veterans, occupying a prominent corner is the center of downtown Boston. Of course, central cities continue to carry a disproportionate social service burden. Low-income and homeless residents do need easy access to various services; why not build next to the Galleria MetroLink station, or in Clayton? Sadly, these would be unpopular options.

For all the budding success of Midtown, a cursory glance reveals a number of vacant lots and storefronts. That is, the free market is not pitting low-income housing against retail and commercial development. This is a social question. The building itself appears quite urban, a nice fit for the area, perhaps similar to the Six North development just a few blocks west. It's also planned for a vacant lot, one of the very few, and sorely needed, proposals for infill. 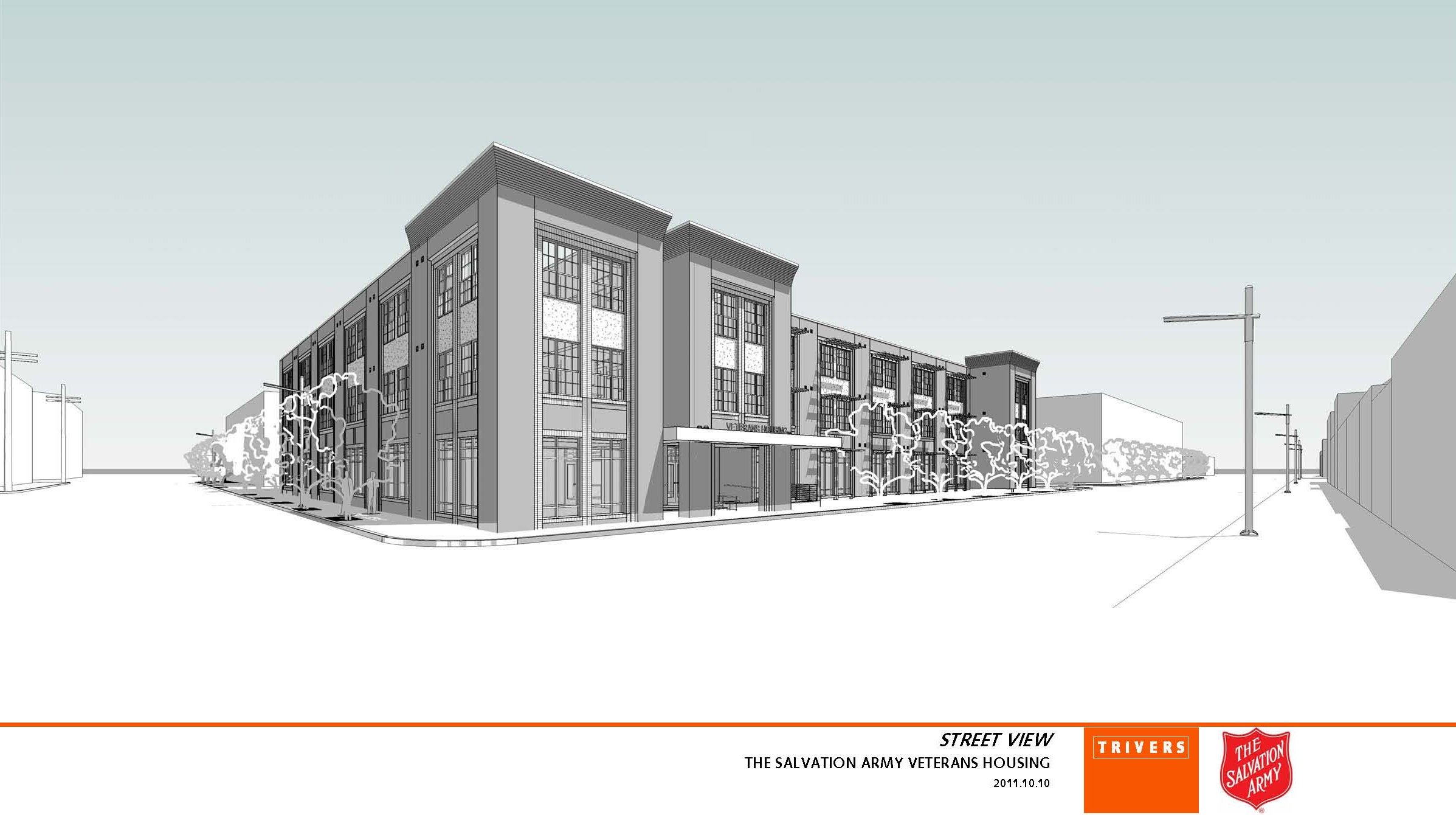 Trivers has previously worked with the Salvation Army on the renovation of the Railton residences in downtown St. Louis. That project converted the building's single hotel rooms into one and two bedroom low-income apartments – a total of 104 units. The $14M project preserved and restored the 1928 Robert E. Lee Hotel, earning a Landmarks Association of St. Louis Most Enhanced Places award in 2010.

At least this much can be said: there's a disconnect between the revitalization of many of the city's neighborhoods, the needs of the city and those of existing residents. Revitalized commercial districts such as Midtown Alley and Forest Park Southeast have enjoyed success as evidenced by often high-end restaurants and boutiques opening. This isn't a statement regarding the merits of any particular business, but do $20/plate Mexican dishes and exotic cocktails fit Forest Park Southeast? These districts are absolutely reliant on destination patrons – those willing to make a specific effort to patronize an establishment. This inherently means that businesses are less invested in the nearer, lower-income residents.

The fight is likely just beginning. To-date few developments have displaced existing residents and businesses, the classic definition of gentrification. Many Midtown Alley and FPSE storefronts (and homes) were vacant prior to revitalization. And many more vacant homes, businesses and lots remain before disparate economic interests are pitted in direct conflict with one another.

The City of St. Louis obviously needs investment and must listen to those putting their own money into revitalizing long underused buildings and districts. Businesses have every right to defend their investments, but the city shouldn't allow those interests veto power over public policy. It appears that the project is moving forward. Would it better if the building were moved to another corner? Probably. Is the project going to be an economic disaster for Midtown Alley? No. Let's hope that the new businesses the city sorely wants find common ground with the services our veterans and homeless absolutely need.

Will Becker, Communications Director for the Salvation Army St. Louis offered the following answers to my questions via email and provided additional renderings of the project as well:

Q: Why can't the non-commercial component be moved to another street corner? Will Phase I, in fact, have commercial space?
A: At this point in the process it would delay the entire project and jeopardize funding for the Veteran's Housing. The building would have to be redesigned and new approvals would have to be obtained. We feel this is the best place for this building in relationship to our programming and future plans. This building will be the nicest on the block and certainly not a deterrent for foot traffic walking through the area.
Q: Is it codified that 75% of the residential units will be reserved for low-income veterans?
A: We expect to fill 100 percent of these apartments with veterans.  The law does allow us to give preference to veterans in leasing and the demand for these units far exceeds what will be available in this development.
Q: Is funding in place for Phase I? (for the entire project)
A: Yes, the funding is in place for the Veteran's Housing (Phase I). We are working on securing funding for the additional phases.
Q: What do Phases II-IV look like, how are they comprised (market-rate, low-income, subsidized, commercial, etc.)?
A: We have plans to build a Red Shield Community Center that will feature a church, programming for the community, fitness club open to the public, computer labs and much more. It will be modeled after a similar one that recently opened in Chicago. The other phases will include renovation of our current facility and have plans to add housing for senior citizens along with additional housing that has potential commercial space.
Q: In a broad sense, do you believe that the concerns voiced by those opposing the plan as currently presented have any validity?
A: We think this development will be a great success.  These will be the nicest, best-built, most energy efficient buildings in the neighborhood, the new residential population will enhance the quality of life in the neighborhood and be good for local retail businesses and the community center will be a hub of activity for people throughout the central corridor.  All of those things make this a great development for the Midtown area. 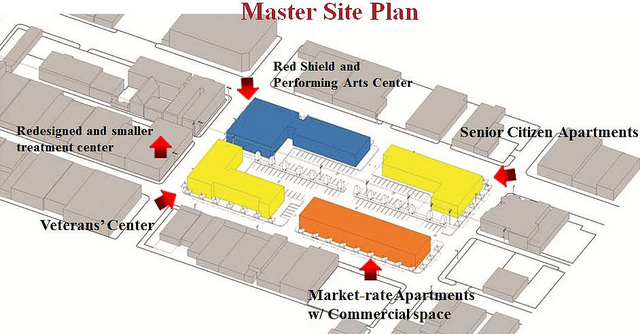 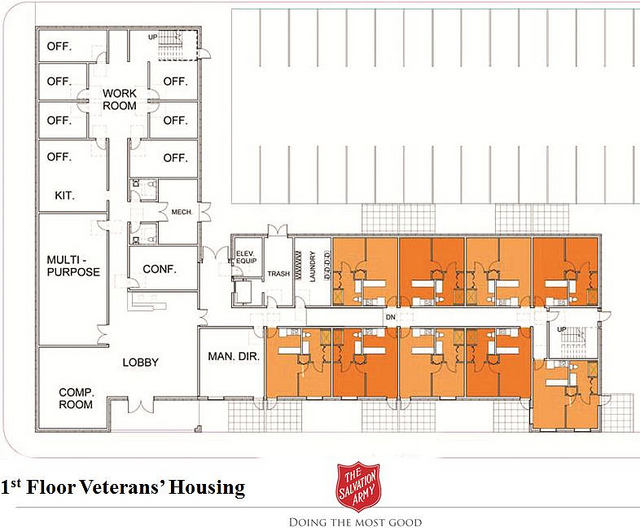