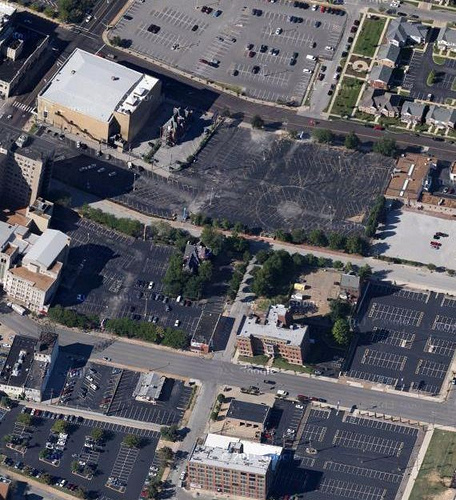 St. Louis isn't on the forefront on urban change. In a sense, perhaps we were, with the demolition of the waterfront warehouse district, Chinatown and then the Mill Creek Valley ("urban renewal"), but "liveable streets", loft conversions and car sharing took a while to reach the middle coast. Our infrastructure is now somewhat self-fulfilling and any migration away from auto-dependency will likely be slow. Perhaps that's why "peak car" likely won't resonate with many here.

As much is obvious. The city continues to build parking garages while even stadium garages fail to fill during the World Series. Historic buildings are neglected and surface parking lots are planned. Even Kirkwood and Clayton are getting into the act by seeking to demolish functional and needed buildings for parking. We're also demolishing buildings for more and larger gas stations to serve people driving less. These decisions will out live those making them and the public's purported desire for ever more parking.

The trend is clear: In 2010 Americans drove the same number of miles driven in 1998. That number has been falling for six years. More of us are living in cities, even suburbs, which require less driving than rural locations. We buy more online, decrease the number of trips to the store. In many places, transit options are growing. Families are choosing to spend less time in the car. And to the generation now just old enough to drive, the driver's license is no longer the symbol of freedom it once was.

Growing up, turning 16 and visiting the DMV on that very day was a right-of-passage, THE right-of-passage. It was a small town, but you left your bike behind (social stigma), and a car was needed to get to a movie theater (in the next town), to shop anywhere other than a Hook's Drug Store, or to visit a friend who lived on a farm. Anyway, apparently times change.

Change is apparent, but our region will continue to make decisions – destroy our built environment – for shortsighted gains. Our population isn't growing, our income isn't growing, but our parking lots are. An informed conversation awaits a real (or any) downtown (or elsewhere) parking study, yet it's nearly unfathomable that we're currently so underserved that we not only need more parking now, but that we should be making the decision for the next, less auto-dependent, generations.