Successful urban parks have thick edges. So says the Michael Van Valkenburgh design plan for the Arch grounds in downtown St. Louis. The MVVA Team included the image above in their design submission, illustrating the concept of the "First 100 Feet" as it appears around the world. This inherently makes sense. Why not use the measure to assess parks in St. Louis and the MVVA revised plans for the Arch grounds?

By any measure, Forest Park is the region's marquee park, by some measures the largest urban park in the country. Millions visit the museums and zoo each year and millions more use the park to walk, run, ride or just relax. The revitalization of Forest Park this past decade was incredible. The edges of and entrances to the park remain abysmal. 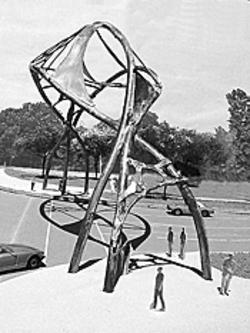 St. Louis wasn't ready for Lawrence Halprin and his post-modern Gates of Eden in 2001 and so we're left with a generally undefined, unwelcoming and ugly edge to Forest Park. The edges of the park remain the least vibrant, least attractive aspect of the park.

As MVVA states, "It is the experience of these first 100 feet that determines whether or not a visitor will want to venture further into the interior. A deep, penetrable, highly trafficked edge that serves as a physical and programmatic gradient between city and park is perhaps the most surefire guarantor of a park’s success." It is a credit to the destination attractions within Forest Park that millions visit each year. However, the neglect of its edges take away from the experience and fail to promote exploration on foot and from surrounding neighborhoods.

Standing at Lindell and Kingshighway, a visitor cannot inherently know if Forest Park begins on the other side of the street. The boundary of the park fails to imprint a mental image on the visitor. Yet it should, and it must if it is to fulfill its potential and enhance the streetscape and adjacent property.

Halprin very likely said it best in an RFT interview in 2001: "There was no fine definition of the place… Most of the wonderful places I've been were demarcated by an entrance… (T)hey were usually places where you had a very strong sense of going from the outside world, or the 'other world,' if you want to call it that, into this wonderful place that you're making."

Here are how two entrances to Forest Park appear today. Some are more appealing than others, yet none announce to you that you are entering a special place, a park at the center of the region's history and culture. 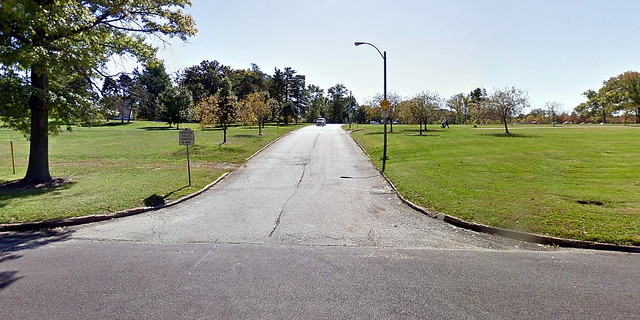 {entrance to Forest Park at Cricket Drive from Lindell Boulevard} 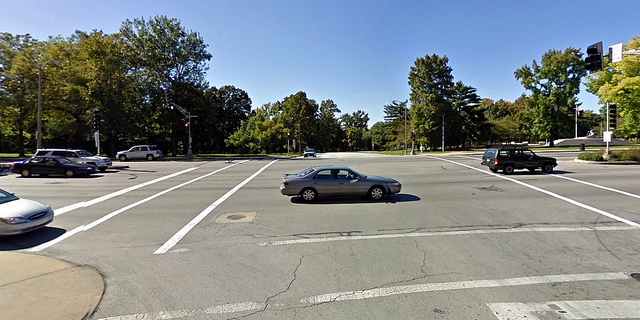 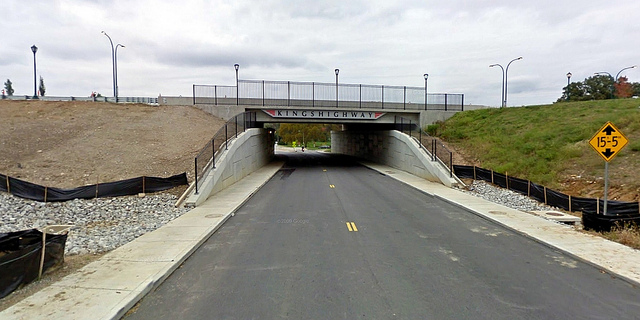 {the Clayton Avenue entrance to Forest Park is the most clearly demarcated, though not beautiful}

Forest Park fails to present an effective first 100 feet. Between BJC's Queeny Tower and West Pine Boulevard, there is one pedestrian entrance to Forest Park. There are flower pots and plants, but it's not possible to see even that one entrance without searching. The south side of the park struggles with the crushing presence of the Interstate highway while the west and north sides offer intermittent activity with significant dead space. Even the golf courses serve more as a barrier than a welcome.

There are mixed, though largely uninspired results throughout the city. Fairground Park once defined its entrances and edges. They have been abandoned for more than half a century. Carondelet Park is beautiful, but also lacks entrance makers and activated edges. The western terminus of the Gateway Mall, our city's civic center, is a placeless wasteland. Our incredible Victorian-era parks weren't focused on activated edges, but the gates of Tower Grove Park may be the best example of placemaking and the successful demarcation of our sacred public space. Likewise, the gates and fences of Lafayette Square Park demonstrate to every passerby that it's a place to be entered and explored, a special, valued piece of land. 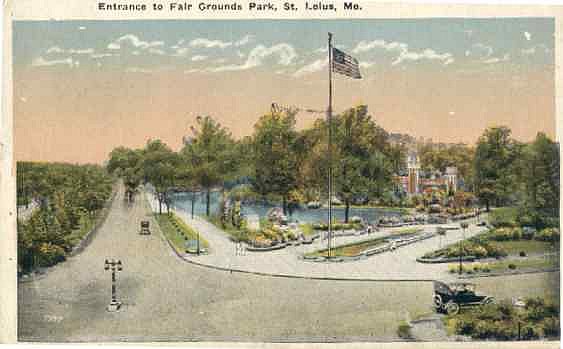 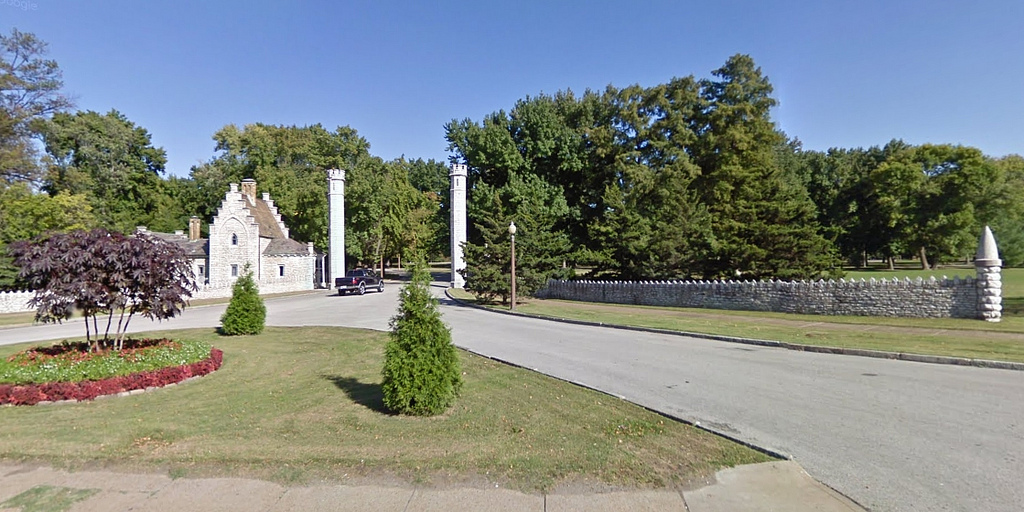 {the entrance to Tower Grove Park from Kingshighway} 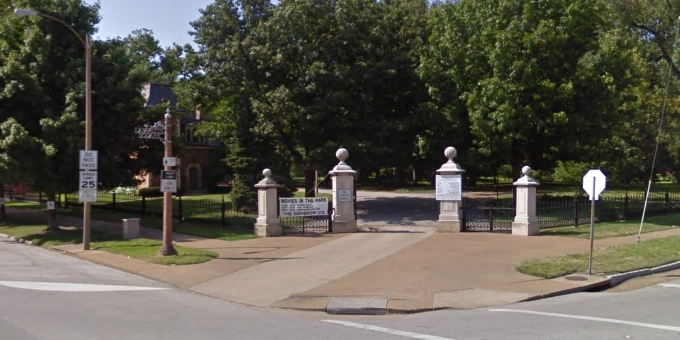 Today, the Arch grounds clearly fail to deliver an inviting first 100 feet. Whether from Washington Avenue with Interstate traffic looming overhead and a myriad of traffic lanes to traverse, the flat out barrier of I-70 at Spruce, the maintenance facility and infrastructure to the south, or the parking garage on the north end, entering the Arch grounds is an unpleasant experience.

So what does MVVA's recently revised plan offer? At the south end, the underpass park is an incredible effort to overcome the maze of Poplar Street Bridge infrastructure. Creating greenspace beneath the bridge and ramps, and offering multi-modal connections to streets, and a future greenway, the south entrance will noticeably improve. However, the centrally located and large maintenance facility remains, blocking a large swath of parkland.

The west gondola platform will force visitors to the south end, but it's unclear what path will serve as primary access. Will visitors walk twice as far as they do now from the north end to reach the gondolas? Will they arrive from the very vacant Chouteau's Landing under the PSB? Will they walk a quarter-mile on a standard sidewalk next to Memorial Drive, a virtual Interstate off-ramp? 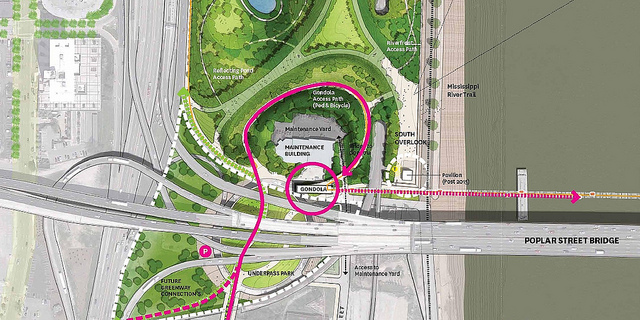 The north end will be drastically improved for pedestrians as Washington Avenue adjacent to the Eads Bridge, and the north parking garage are removed. The first 100 feet from Laclede's Landing will be an inviting experience. Northbound Memorial Drive is removed, allowing for a wider pedestrian path separated by trees and landscaping from the Interstate. The Washington Avenue intersection is improved as well, providing for a less confusing pedestrian experience. 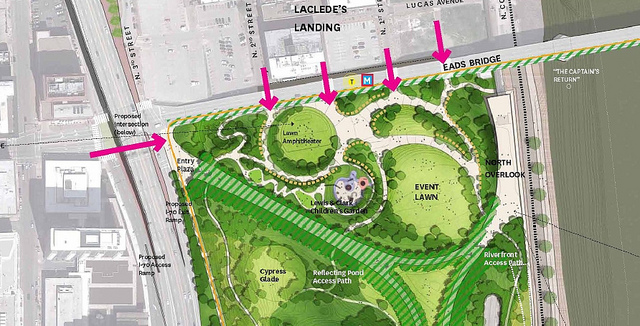 The closure of Memorial Drive at the Gateway Mall and introduction over a lid of the Interstate depressed lanes provides a signature entrance to the Arch grounds and likely the best 100 feet of the entire park. The problems caused by street closures for everything other than the "First 100 Feet" experience have been discussed before on this site. It nearly goes without saying that as long as the trench and elevated Interstate lanes remain, the first 100 feet of the Arch grounds will continue to suffer.

Because of this, the softening of the Walnut Street entrance to the grounds at the Cathedral Basilica is the most successful implementation of this concept planned. Although it's unfortunate to see a significantly scaled-back Cathedral Square, the restaurant and reception hall now appear to be a much smaller pavilion, the square is placemaking at its best. The square and surrounding improvements take advantage of what should be presented as significant location on the grounds.

Lastly, it's worth noting that the most significant change to the first 100 feet of riverscape has been removed from the MVVA plan. The lighted water gauges in the river were a smart idea to draw people toward the water and mark an "entrance" to the park. Sadly, the river's edge is slated to remain placeless. Yet, in a very meaningful way, the MVVA plan attacks the first 100 feet of the Arch grounds and makes some needed dents in the current landscape.

Overall, a poor job is done demarcating the places with special meaning in our city. Our city parks and planned Arch grounds renovations need to do more. It is at the intersection of the route and the destination where St. Louis can have the greatest positive impact on the vitality of our abundant and remarkable greenspace.