After decades of purposely zoning against multi-family and dense commercial development, St. Louis County is spending $150,000 to study potential zoning code revisions that would allow for more density. Any changes are hoped to be in place before 2013 and would affect only unincorporated St. Louis County, roughly one third of the county's 900,000 residents. Although not binding, consultants are being asked to provide advice for municipalities as well.

Two things are required to understand current zoning restrictions in St. Louis County. First, read Colin Gordon's incomparable Mapping Decline: St. Louis and the Fate of the American City. Second, understand that the St. Louis experience is not much different than that of other cities. 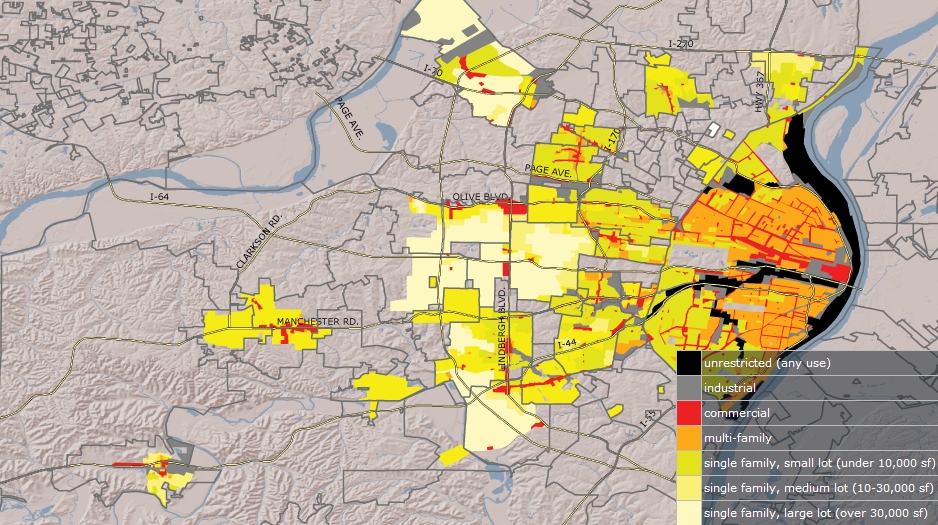 For decades, St. Louis County boomed and St. Louis City wilted. People and jobs moved for many reasons, and when they did, it was to new land. Just as the original St. Louis subdivisions of Shaw and Forest Park Southeast rewrote development codes and reflected market demand, so too did development of Warson Woods, Creve Coeur and other locations in the county. Zoning in the county often dictated minimum lot sizes and excluded any development other than single-family homes, purposely pushing the coffee shop and gas station (not to mention schools and parks) to the periphery. But trends are just that, even if they last decades.

The 2010 Census showed that St. Louis County is losing population and wealth, while St. Louis City is gaining both. It was inevitable that new kinds of development will be needed in the county. Development is, by definition, market based. The market has been shifting toward increased density for some time and is predicted to continue in that direction. Be it unsustainable infrastructure, long commutes and the cost of owning car, or the desire for a smaller home and yard to maintain, many influences are conspiring to promote increased density. 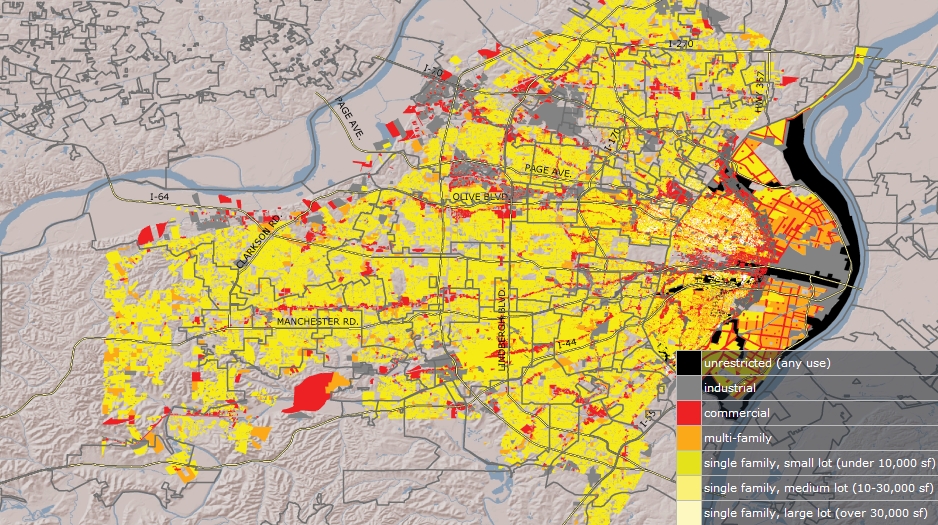 In the end, today, denser development makes sense for the market: municipalities that cannot maintain sewer lines and streets, developers who earn more on scaled, multi-unit development and the real estate profession that is looking for the next trend in development and home ownership.

Today's Post-Dispatch article covers the issue well, but two statements require a closer look. The opening line states "St. Louis County planners want to change the county's zoning codes to encourage people to live closer together…" In fact, what is happening is that changes will allow people to live closer together. Living in a smaller home and driving less is what people want.

As well, development attorney John King is quoted as saying, "There is a need for density to make sure that costs don't go out of sight. People can't afford to buy a house or live in a house." This misses the mark. People aren't leaving St. Louis County because it's too expensive and any zoning changes will not impact Huntleigh or Ladue anyway. Again, there is a need for density because there is a market demand for it. The recent added density in Kirkwood and Clayton have not lessened prices.

Among possible changes, a new zoning code could drop requirements for excessive parking and allow homes to be built on smaller lots. In reality, the changes will have the greatest impact by allowing more dense development on vacant retail sites and in uncompleted residential developments.

Per the Post-Dispatch article, zoning revisions to be considered include:

As the zoning attorney said, "The market is different than it was five or 10 years ago. It won't go back to what it was." St. Louis County is being forced to change and they are smart to do so now and not wait. And yet the market likely won't be what we think it will be. The established development patterns of the county will change very slowly and many questions remain. Does more dense development makes sense without addressing accessibility and greater connectivity via a street grid? How deep is the market for dense development and can it be done a scale that's functional?

St. Louis County is competing for jobs and residents with the more dense St. Louis City, but its biggest challenge is stemming the exodus to St. Charles County. St. Charles County is not luring residents with dense development, but with quiet living and five bedrooms and a yard for $180,000. St. Louis County is literally stuck in the middle of two trends and while it may appear obvious that increased density is a necessary goal, it can only be one part of the county's development strategy.