In general, I've sided with Paul McKee's assertion that transformational change is needed in North St. Louis. The secret land purchases were unsavory, the neglect of vacant lots and buildings unforgivable and accusations of blockbusting and imminent domain gave plenty of reason to oppose the NorthSide plan. Today, McKee released "An Open Letter to the People of St. Louis."

I want to think there's a way forward with revitalizing St. Louis, north, south or elsewhere. Paul McKee has invested millions of dollars in his vision. If successful, he stands to make millions, as any developer would. To his credit, decades of redevelopment, revitalization and reinvestment plans have come and gone. He rightly notes that few St. Louisians are happy with the state of parts of our city.

So it's frustrating that the NorthSide Regeneration Initiative can't seem to find any footing at all. In today's letter, McKee recognizes setbacks, specifically the delay in rehabilitating the Clemens House (still coming, we're assured). He recognizes that NorthSide is a series of projects and it appears that individual TIFs will likely go to the Board of Alderman to address the court's rejection of the original TIF as too vague.

But today's letter makes me less likely to support what I see. Full of non sequiturs, odd emphasis, just weird statements and a quote from theologian Dietrich Bonhoeffer, the letter does nothing to build credibility. I'm not saying he's wrong or that much of the development isn't a good idea. I'm saying that this letter, well-intended, passionate and honest, doesn't make me a believer in the development or process going forward.

For glimpse of what was said, scan the word cloud below. The compete letter can be found at the bottom of this post. 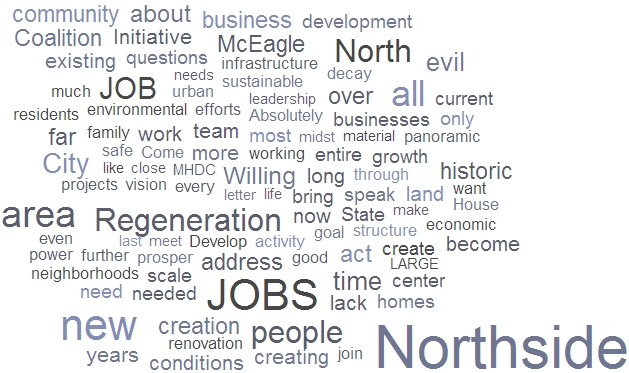 An Open Letter to the People of St. Louis_Paul McKee_NorthSide Regeneration Initiative