According to the CityArchRiver2015 Foundation, organizers of the Arch grounds design competition, visitors will be able to take a gondola ride across the Mississippi in the near future. When unveiled this past year, the gondola spanning the Mississippi River were the most visually stunning element of any of the proposed designs. It's a bold idea, and may generate revenue, meaning it could be the rare addition to the park that costs nothing. It also doesn't alter the grounds itself and does avoid the engineering challenges of building a structure such as a pedestrian bridge, with footings in the shipping lanes of the river. Some fret it may change the nature of the area. Let's hope so.

Here is what I had to say when the plan was first presented:

The feature is the only attraction offered by any team that has the potential to add a second signature element to the Arch grounds. In fact, I find it very likely that the gondola experience would be much more popular and enjoyable than riding the Arch tram, though I don't know if that's the right way to celebrate the Arch.

But I think the real problem is that gondolas do not serve well as a practical, multi-use connection to the East side. No one out on a run and wishing to do a loop to the east would run to the gondola, buy a ticket, take a ride and resume running on the other side. Few cyclists would do so either, maybe once, but not as a routine act. A pedestrian bridge serves this everyday, casual purpose much better. 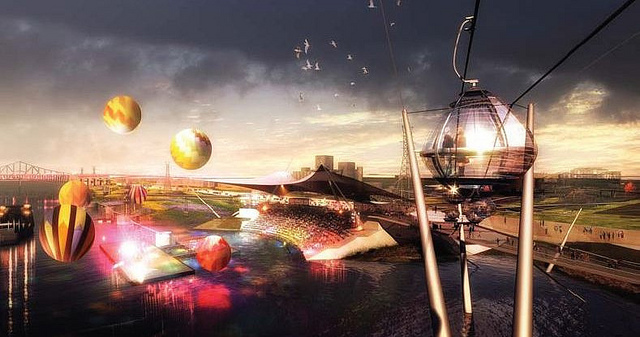 The competition was always clear that ideas from multiple teams may be incorporated into a final design. The challenge presented by a la carte design is that components are ideally part of a larger theme or purpose. Behnisch proposed the gondolas as a connection to what they termed "The Bend Performing Arts Center", a waterside amphitheater and a "cultural incubator" facility. It may be a challenge to attract people without a real east side destination. The Benisch plan also planned for a loop, the "Rivercircle": a gondola ride and walk back across the Eads Bridge, wholly half of which would be designed for pedestrians and bicycles. The MVVA plan called for simply widening the sidewalks on the Eads Bridge, hardly providing a lure for those wishing to bike or walk across the river. 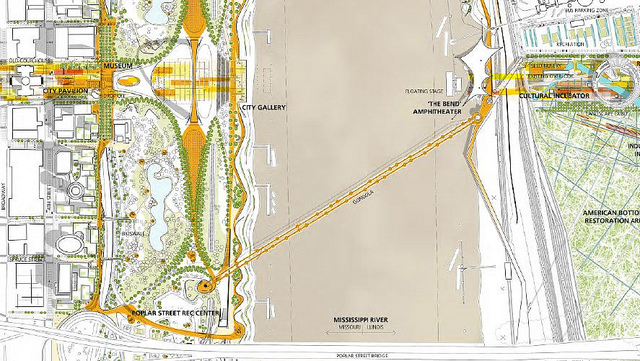 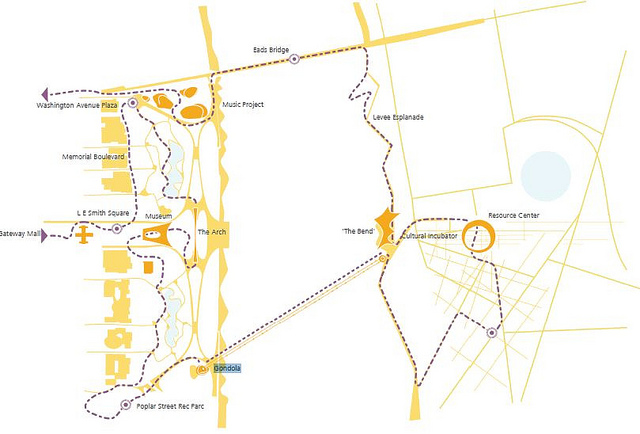 {the Rivercircle concept, including a pedestrian realm on the Eads Bridge}

The gondola is good news for the east side. People will ride it. And even if nothing were to change on the Illinois side, simply landing on the east side and (presumably) not getting shot, would show visitors that there are two sides to the river and that both can be enjoyed. The incredible views from the east side will excite and surprise many.

The gondola is also a bold decision for the City+Arch+River Foundation. Providing excitement while attending to the more mundane, but necessary (see Emerald Ash Borer), changes at the Arch grounds was always going to be a challenge. With this one element, everyone, whether driving across the Poplar Street Bridge on their commute, or visiting the Lumiere Casino, will be able to see that the Arch grounds have changed. This message is incredibly important.

But of course best of all, Carol (the Behnisch character from their brilliant narrative) may actually get to take that gondola trip and take time to muse on what it all means:

In St. Louis, Carol thinks, all you heard about growing up was the Arch…that stupendous, gleaming bend of stainless steel on the banks of the river; it was always just there – on the horizon, at the distant end of Market Street, past the periphery of Busch Stadium during a Cardinals game. And you went dutifully, on a school trip or two, or to show family friends visiting from out of town, and then perhaps to Fair St. Louis on a Fourth of July weekend, to see the fireworks arching over the river. But, she muses, as she rises above the great river in a cable-stayed, smoothly gliding gondola car: that was all before – before the competition, which had proposed such ideas and initiative for both sides of the river generated its fair share of debate!); before those fantastic build-up events, anticipating new vitality to downtown and the east and west banks of the river… 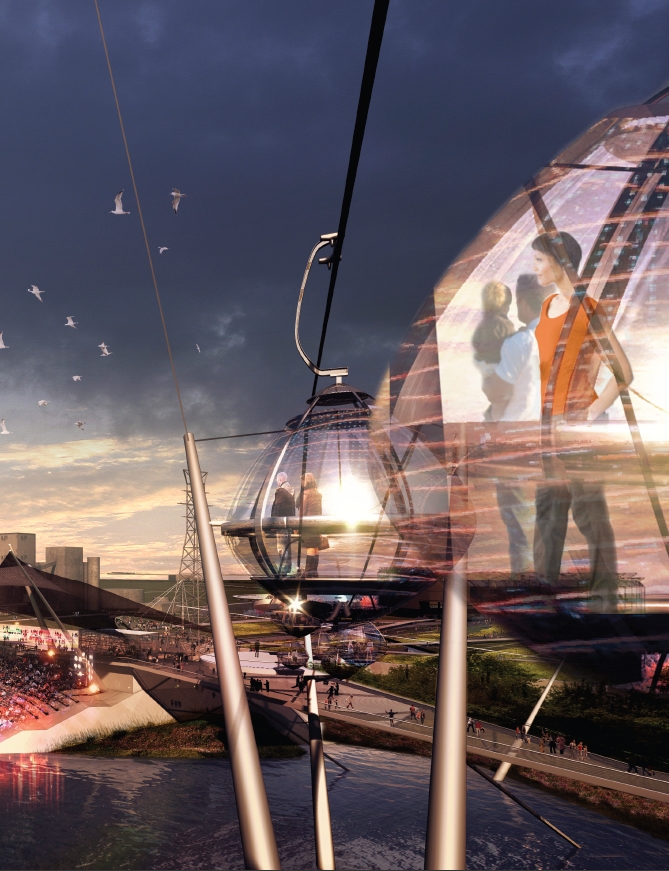