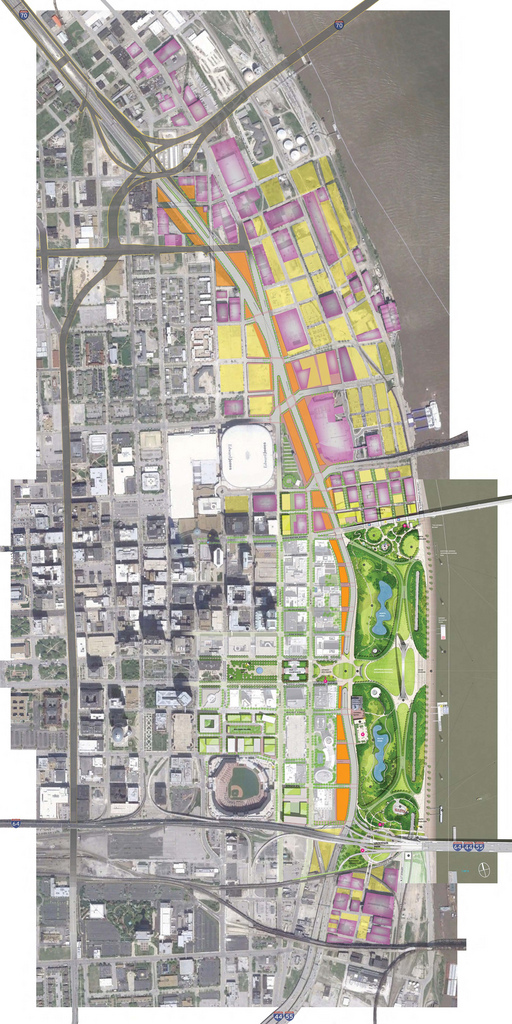 For some time, the City to River organization (of which I am a part), had advocated against the building of a "lid" across the depressed lanes of I-70 in downtown St. Louis. The reasons were many, but two primary objections were the expense of a long lid (tunnel) and the potential closing of Memorial Drive. However, a shorter lid and the transformation of the existing I-70 into an urban boulevard shows how the ideas may work together (City to River post).

The tunnel, with an estimated cost of $80M+ would add an incredible amount of infrastructure that presumably would not be rebuilt or reconfigured for decades. Closing Memorial Drive would eliminate a vital connection downtown and make already confusing city streets even worse. The point is that if a lid is to be built, Memorial Drive should remain open until the boulevard replaces I-70, reclaiming and maintaining our urban fabric and street grid.

If done well, the boulevard with lid would preserve traditional city street intersections at Pine and Walnut, leaving Market and Chestnut at Memorial Drive as a pedestrian realm. If the lid concept is a primary objective of the Arch competition, it should be designed to accommodate the transformation of existing I-70. The image below shows more detail of the City to River concept overlaid by the winning design of MVVA and the potential closing of Memorial Drive. Right click and open in new tab for full size image – 2700 x 5400px.