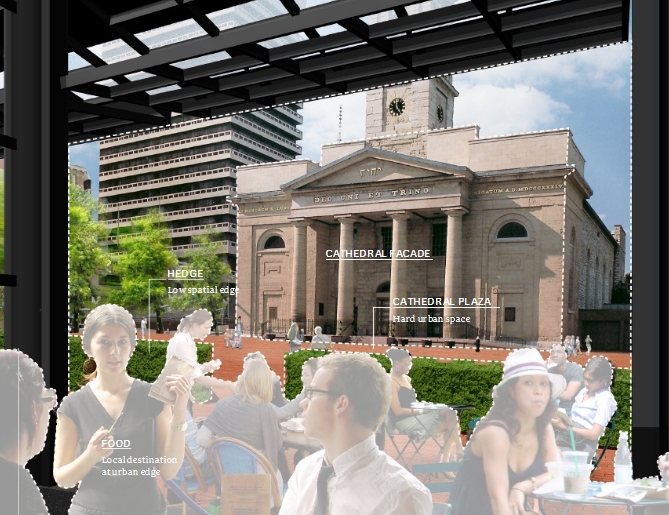 nextSTL has learned that the design team led by Michael Van Valkenburgh Associates, Inc. will be named the winner of the Framing a Modern Masterpiece competition. MVVA received a congratulatory phone call this past week and will be traveling to St. Louis to attend the official announcement this Friday. The remaining finalist teams, including Behnish, PWP, SOM and Weiss-Manfredi have now been notified that they did not win.

Click here to read the full nextSTL review of the MVVA design submission. Presentations to the jury and additional information can be found on the nextSTL Arch grounds competition page.

It’s worth mentioning that a winning design has not been chosen, only a winning design team. The decision in not final until officially announced this Friday at 10:00 a.m. at the Old Courthouse rotunda. City of St. Louis Mayor Francis Slay, JNEM Superintendent Tom Bradley and others will be on-hand for the presentation and a question and answer session following the announcement.

The review on this site concluded that MVVA had banked their competition chances on “feasible.” It appears that it was a winning decision. Two primary factors considered by the jury and benefiting MVVA were likely the ability to complete a coherent design by the 2015 deadline and the capability of the assembled team to manage large, complex projects.

MVVA is currently leading a design team recently named one of four finalists in the competition to redesign the Seattle waterfront. They have also completed projects such as the 85-acre Brooklyn Bridge Park and Ken Greenberg of Greenberg Consultants served as the lead urban designer on a team led by MVVA to re-imagine the 308-acre Lower Don Lands in Toronto. Interestingly, Behnisch Architects were part of that MVVA team.

There is much to like in the MVVA submission and some very reasoned design that looks better at second-glance. At first glance, the treatment of I-70 and Memorial Drive may be the best of the submissions as it allows for further study and the possibility of a more complete solution than can be completed by October 2015. The unique framing of the Old Cathedral is fantastic, the full cobblestone levee a nice touch and the water gauges potentially interesting, not to mention the beer garden.

Perhaps the biggest negative is the treatment, or lack there-of, of the Eads Bridge. MVVA proposed to slightly widen the sidewalks from five to eight feet. Fortunately, this is something that appears to be easily reconsidered. And on second-glance, the east side design is very smart. At the jury presentation MVVA made the point that turning over a single shovel of contaminated dirt would lead to costly and lengthy delays while meeting environmental regulations. They also detail a geothermal tempering system using wells and the existing ponds.