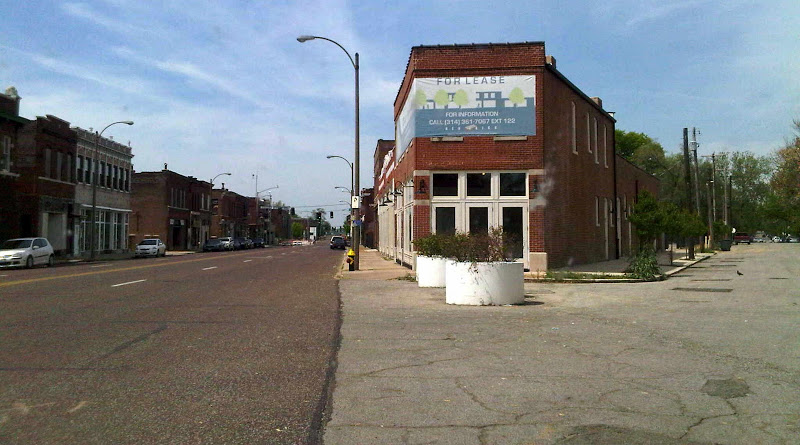 The project to rebuild the Manchester Avenue streetscape has been in the works for nearly two years. In March 2009 it was announced that East-West Gateway had awarded $1.45M for lighting enhancements along the corridor and other funds had been allocated to create a better streetscape. The neighborhood and commercial strip have made remarkable strides over the past decade, but Manchester Avenue remained marked by broken sidewalks, poor lighting and signage, and accessibility issues.

While South Grand has received a lot of attention with its sewer pot experiment and the winning-over of the City streets department and local aldermen, Manchester has quietly begun to be transformed. Construction started several weeks ago and is quickly moving from east to west. Similar to South Grand, the project will reduce traffic lanes from four to two between Taylor and Sarah Avenues. For those of you into construction drawings, particulars of pedestrian lighting, street furniture, bike racks and more, check out the documents below (recently posted by the excellent Park Central Development/17th Ward blog).

The project is a complete overhaul, but some areas will change more than others. If you're looking for what a new streetscape will bring to The Grove, one good place to look is the intersection of Arco and Manchester. Currently, a rehabbed commercial building sits vacant, poor lighting and too narrow and poorly maintained sidewalks make this an unattractive corner. Existing conditions are shown below, followed by construction drawings for the new intersection.

{existing conditions at Arco and Manchester}