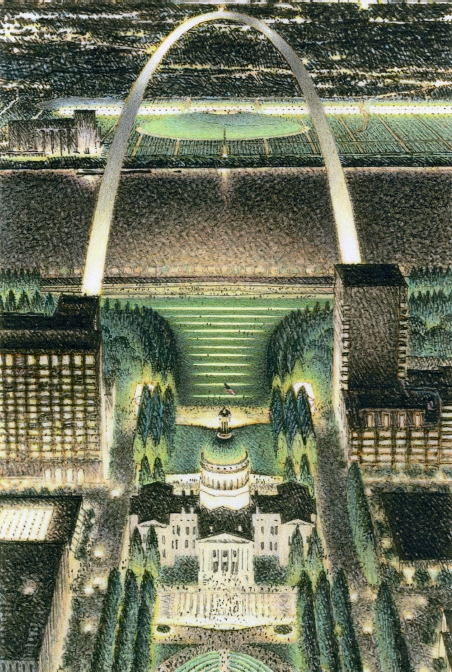 This is the first of five full reviews of the Framing a Modern Masterpiece: City + Arch + River design competition submissions. Each review focuses specifically at treatment of Kiener Plaza, the Old Courthouse, I-70/Memorial Drive, the Museum of Westward Expansion, the Old Cathedral, the Arch grounds north and south ends, the riverfront, cross-river connections and the east side as well as overall feasibility and overall excitement. Each of the five final design full narratives can be viewed on nextSTL here.
______________________________

Kiener Plaza
The “spiral theater” is a nice design, promising shade and an interesting place to sit for lunch, visit with friends, picnic or take in a performance. It is an improvement over the current amphitheater? Maybe not by much, but I like the natural setting proposed. The wave fountain would likely be a hit judging by the popularity of water features (see City Garden).

The addition of sculpture in the re-imagined plaza’s passive space is welcome too, but it’s odd that a Dallas, TX park is noted as an “outdoor sculpture precedent.” (SEE City Garden) The “wave fountain precedent” cites Portland, OR, but the images are nearly identical to the current Kiener Plaza fountain. Did PWP visit St. Louis? Were they self-conscious of appearing “local” and felt the need to cite far away and lesser examples?

The symmetry of the design is welcome, but not the symmetry of the underground garage vehicle and pedestrian entrances. Especially unwelcome are the wide stair access points mid-block on both 7th and Broadway. Both streets show a mid-block surface treatment, but the only natural connection is in and out of the parking garage, others will be impeded from walking the axis of the park straight to the Old Courthouse.

I-70/Memorial Drive
This may be PWP’s Waterloo (Napoleon being played by PWP). Memorial Drive is left in place, but as a two lane street serving primarily as a museum drop-off location. The current east side of Memorial Drive would terminate at Walnut, becoming, in effect, a long northbound I-55/I-64 off-ramp. A two-way Memorial Drive is located west of the depressed Interstate and terminates at Pine to the north.

The plan introduces substantial additional infrastructure AND limits access. Further north, a new exit from the northbound depressed lanes intersects Washington Avenue. This adds even more infrastructure and introduces a particularly odd alignment. Traveling eastbound on Washington Avenue a driver wishing to travel south, but passing Broadway, would have three bad options: 1) turn north onto one-way 4th Street, 2) enter I-70, 3) cross the Eads into Illinois. That’s not what you would call accessible.

Also at Washington Avenue, a new entry plaza and improved sidewalks are shown, with “café space” on the 300 block, all with the elevated portion of I-70 looming overhead. Inexplicably, two boxes labeled “reinvestment opportunity” are shown under the elevated Interstate. No, no, no, no and no. Washington Avenue adjacent to the Eads Bridge is gone, except for the block between 1st and 2nd Streets to access the parking garage. This configuration requires drivers to navigate the one-way narrow streets of Laclede’s Landing. Again, this does not increase accessibility.

[edit 8/26/2010] I spoke with Peter Walker following the PWP-Foster+Partners-Civitas jury presentation and he had the following to say, “We’re anticipating I-70 will be removed, but not in our (2015) time frame. I think it will happen. Not only would our design not be in the way of a boulevard, but we designed so that it purposely works with a boulevard.” Mark Johnson of Civitas addressed I-70 in the presentation as well, saying, “In the long run we know that there are many people who wish the freeway would go away and that might be possible. And if it does go away you could open up a number of connections which today are precluded by the freeway.” It remains difficult to see how the integration of a boulevard after 2015 would work. [edit]

Museum of Western Expansion
PWP shines with their vision for an expanded underground museum. While every team imagines an expanded museum with a new western entry and natural light, PWP takes the drama much further (perhaps only matched by Weiss-Manfredi). Two glass structures flank the Gateway Mall intersection with the Arch grounds, leaving an unobstructed view from the Old Courthouse to the River – something PWP astutely notes was envisioned by Eero Saarinen.

This requires the elimination of the current rise in the landscape that partially obstructs the view of the Old Courthouse from the Arch and vice-versa. As a result, the opportunity to introduce natural light into the museum must come from a source other than the new entry (as the other four designs accomplish). Unfortunately the most dramatic entrance is reserved for those emerging from the parking garage, as in Kiener Plaza. The rendering is beautiful enough to make me want to take MetroLink to 8th and Pine and walk into the parking garage just for the view. That’s as ridiculous as it sounds.

A series of 11 skylights, increasing in width to more than a city block wide as the reach the Arch base, slice through the ground. An interior elevated walkway over the expanded exhibit space below allows a visitor to glimpse the Arch from underground as they move east. The dramatic entrance culminates at the largest skylight, spanning the width of the Arch base. The “Great Hall” beneath would host exhibits and a restaurant. This would be without a doubt the best restaurant view of the Arch, just under 700 feet directly below its apex.

Old Cathedral
PWP does not address the Old Cathedral with the exception of depicting a small “frontier village” nearby – another tip of the hat to Mr. Saarinen.

North end
PWP shows little imagination, depicting a “Future Cultural Facility” at the north end of the Arch grounds. Again, Washington Avenue is cut off from east or west access and instead is accessible only from north of the Eads Bridge.

South end
Another “Future Cultural Facility” is “imagined” at the South end of the Arch grounds. How difficult would it have been to put in an amphitheater with a movie screen – however routine it would be? It’s as if PWP simply didn’t answer a multiple-choice question. Disappointing.

Riverfront
Here, PWP again offers to enact Saarinen’s original competition winning design. While Saarinen had preferred to have the rail line relocated, it didn’t happen. PWP proposes to completely cover the existing exposed segments of rail line. This would create a similar landscape to Saarinen’s original vision. Lenor K. Sullivan Boulevard is retained (good move) and paved with cobblestones. I like this as well, though a plan better than whatever is in place on Laclede’s Landing to maintain the cobbles would have to be put in place.

The only other change to the riverfront is the introduction of Saarinen’s original sweeping, catenary curve staircase. This is really very similar, functionally, to the current staircase, but introduces a sweeping curve that aims toward the river. One more nod to Saarinen. Do you see a theme?

Cross-river connections
Except for being visually represented in an image showing new crosswalks along Washington Avenue and in Laclede’s Landing, cross-river connections are not addressed. PWP shows the Eads Bridge with two traffic lanes with a bike path on the north side and pedestrian path on the south. This seems to be a glaring omission when one views the focus on connectivity presented by the other teams, but then again, Saarinen didn’t originally propose a bike or pedestrian path on the Eads!

East side
PWP envisions a large conical mound with a flat peak just topping the height of the Eads Bridge. The mound is aligned on the axis of the Gateway Mall. Surrounding the mound are agricultural fields, an idea labeled the “Center for Agriculture and Well-Being”. I admire the simplicity of this design and the practical use of the east side landscape. However, a vibrant farmer’s market will not work here. The two images of farmer’s markets offered by PWP? Both in historic central cities with plenty of pedestrians – think more Washington Avenue or Old Post Office Plaza, not east side corn field.

And given that St. Louis is a big regional (more than national or international) tourist attraction, I have a difficult time understanding how a “Center for Agriculture and Well-Being” is going to attract many people. There are limited things to explore for regular visitors. What we’re left with is a bigger, earthen observation deck than we currently have. Finally, the imitation of a Native American mound doesn’t sit well with me, not with Cahokia, a place that deserves National Park status itself, sitting underappreciated and undervisited just a short distance away.

Feasibility
This plan is certainly doable, especially Kiener Plaza, the East side and north and south end attractions. The design focuses on adding trees and repairing other landscaping as well. The museum expansion is clearly ambitious, but covering the exposed railroad tracks could prove more challenging and possibly just as expensive, while having less impact on the visitor. The significant addition of highway infrastructure and confusing traffic realignments as well as the placement of the west museum entrance and parallel restaurant would preclude removing I-70 and introducing an urban boulevard in the future.

Excitement
Except for the museum, there’s little that jumps off the page and grabs your attention. The seeming slavish adherence to Saarinen’s original plan seems at once boring and a cunning attempt to differentiate PWP from the crowd, kind of like bidding $1 on a speedboat and French Riviera vacation on the Price Is Right. Perhaps the others teams have overreached. Only time will tell how much the competition jury considers the Saarinen’s original plan the best vision for the next century.