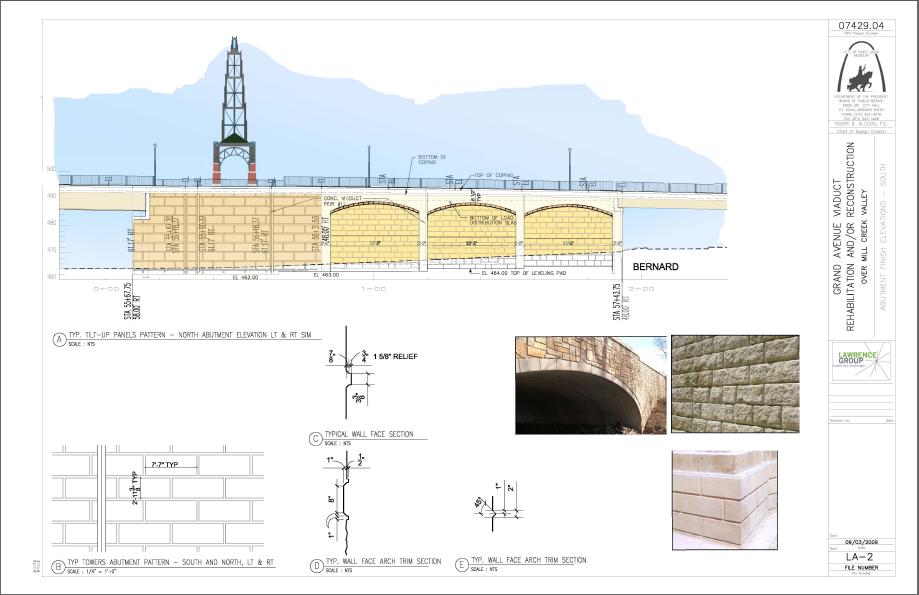 The Grand Avenue viaduct spanning the valley, railroad yard and MetroLink tracks and connecting Midtown and the Tower Grove area will soon be demolished. A new $27M bridge will take an estimated 14 months to construct. Design plans have been finalized and the new bridge will have fewer traffic lanes, dedicated bicycle lanes, transit amenities, and 12-foot wide sidewalks (currently 4-feet).

The current 1,165-foot bridge carries more than 30,000 vehicles a day and is more than 50 years old. Although there are currently six traffic lanes, the new configuration will have just four with turn-outs for Metro bus service. Currently, buses stop in the far right traffic lane effectively eliminating a traffic lane. This often has a greater role in slowing traffic than eliminating a lane and it leads to unpredictable slowing and stopping.

The new design attempts to echo the original structure built in 1890. The project is funded by 80% federal grants and the remaining 20% will come from St. Louis City. When built, the old viaduct was much needed north-south connector in the City. It carried streetcars, pedestrians and other traffic across the Mill Creek Valley. The new bridge will once again be more amenable to varied modes of transit.

MetroLink will continue to run beneath the structure as it is demolished and rebuilt, and the Grand Avenue station will remain open as an extended boarding platform will locate the station just outside the construction zone. When needed, edicated Metro shuttles will run between the Central West End and Union Station stops to Midtown and St. Louis University. Metro is currently planning for a new transit plaza below the bridge in additional to covered stops on Grand. The transit plaza preliminary plan is below.

Here is the latest regarding detours and transit changes from Metro (02/22/11):

During select weekends especially at the beginning of the project, there will be no MetroLink service between the Central West End and the Union Station MetroLink Stations. During this time buses will transport customers in a bus bridge. Metro will alert customers in advance of these events.


{the original Grand Avenue Viaduct soon after construction in 1890}