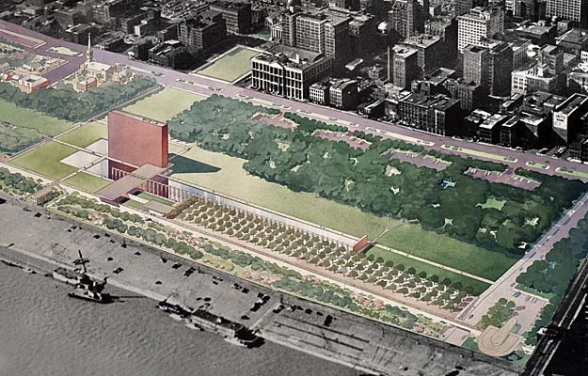 ST. LOUIS, February 27, 1948 – The long anticipated result of the Jefferson National Expansion Memorial architecture competition is in. Following participation from around the world, Kirkwood, Missouri’s Harris Armstrong has been awarded the grand prize.

His vision of open park land with a reflecting pool, arbor of trees and single block building was singled-out for being “feasible” and “low-risk”. “There were several remarkable and inspirational submissions, some really brilliant designs,” said competition jurist Fiske Kimball. “However, only Mr. Armstrong’s, of the final designs, was viewed as inspiring enough, and able to meet our 1953 deadline for completing construction.”

A lot was riding on the competition outcome as St. Louis seeks to revitalize its downtrodden riverfront. Competition jurists were keenly aware that the winning design needed to be “good enough” while not overly complicated or aspirational.

Mr. Saarinen’s proposed “arch” garnered admiration, but fell short in the final examination said George Howe, coordinator of the competition. “Of course it would be great if we could have chosen the “best” design,” Howe offered. “But we have to be practical here. There were just too many questions about how this “arch” would work. Someone would have had to study the issue.”

To-date, St. Louis has successfully followed a low-risk approach regarding the complex issue of building a National Memorial in an urban setting. Mayor Aloys Kaufmann expressed pride in progress so far. “The process is taking longer than we would have liked of course, but I am proud to say that our great city has successfully cleaned up our riverfront, and not taken foolhardy risks along the way.”

More than 90 acres of buildings in various states of disrepair have been cleared to make way for Armstrong’s reflecting pool and monument. The area that has been the site of the Spanish territorial capital and the Battle of St. Louis as part of the Revolutionary War has been cleared so that we can celebrate that history.

Beyond doubts regarding Mr. Saarinen’s ability to actually construct his conceived “arch”, jurists noted that the design submitted left what is likely the most obsolete building on the riverfront in place. The “Old Rock House” as it is known, barely resembles the original structure that was a fur-trading business beginning in 1818. “What could be more obsolete than fur-trading?” asked jury member Roland Wank. “It would simply be too risky to keep the structure.”

Mr. Saarinen was clearly disappointed with his runner-up status. “It just seems that if we go through the trouble and expense of having an international design competition, that we should really strive to do something bold. If mine was the best proposal, I don’t see why we couldn’t find a way to make it reality.” Saarinen lamented. “No “high-risk” label or timeline should dictate that we accept a lesser design.”

{the submission by Mr. Saarinen showing his fanciful “arch” and the Old Rock House}