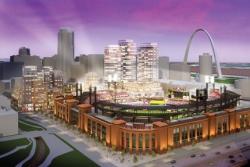 With word once again that Ballpark Village may start with two blocks of scaled-back development if public subsidies are secured and financing comes together, it's time that someone says "who cares?" The first comment on urbanSTL regarding BPV was posted in March 2005. By then various renderings were already being debated; how tall is the residential building? How many 10-story plus towers will there be? More than five years later we have nothing.

Other significant projects have seemingly come and gone as well, including the Bottle District and Lumiere Phase II. Yet Washington Avenue continues to see development, Post Office Plaza and the Gateway Mall as well. Some have doubted the grandiose plan from the beginning, others after the first delay, or the second or the third. The latest commentary came from the Post-Dispatch this April, "Maybe the last thing downtown needs is a contrived "entertainment district" of chain restaurants and stores."

Done well, even a six-block development needn't be "contrived" and BPV has always been planned to include office, residential and hotel space in addition to chain restaurants and stores. That's not my concern. My concern is that the Cardinals will do nothing until market demand and public subsidies create the perfect storm, that deadlines and penalties are meaningless and finally, that current property owners and would-be investors sit in limbo knowing that any development plan could at any moment be usurped by yet another announcement of "imminent" BPV progress.

Certainly the BPV site is unique, but its time as the downtown location may have already passed. A new 22nd Street interchange promises a new terminus for the Gateway Mall, the new Mississippi River Bridge landing offers signature views of both the Arch and the new bridge. The most significant opportunity of all may be the City to River plan to replace the current Memorial Drive and I-70 from the Poplar Street Bridge to the new bridge near Cass Avenue. If you're looking for a signature development opportunity, direct access to the Arch grounds, a view of the iconic Arch and a vibrant pedestrian boulevard is it.

It's past time that we stop caring what happens at Ballpark Village and begin recognizing the city's signature options for development downtown. If downtown St. Louis is a different, more vibrant and lively place 10 years from now, it won't be due to Ballpark Village.

{one of several scaled-down renderings of Ballpark Village}
{jcomments on}