After nearly two years, a new I-64 (Highway 40) from I-270 in suburban St. Louis County to Kingshighway in St. Louis City is nearly ready to open. If all goes according to plan and the weather remains favorable opening day may well be before Thanksgiving. I'm going to take a look at the project from west to east and hope that others will add their comments.

First, adding lanes to I-64 from Ballas Road to I-170 was entirely unnecessary. A rebuilt roadbed with banked turns and improved interchanges would have greatly improved the road. After all, Highway 40 was built as a parkway and any perceived functional issues were the result of the road's history. Ultimately, the well documented problem is that widened highways only relieve congestion if the same number of drivers use it as did before widening. This, however, is not what happens when a highway's capacity is increased.

The only thing achieved by widening this stretch of I-64 is an increased capacity to more cars from I-270 to I-170 at rush hour. With more lanes more people will drive the road in general and those drivers will be more likely to drive at peak traffic times. Leaving the Interstate well under capacity at all other times.

Gridlock did not come to St. Louis when a portion of the Interstate was closed in January 2008 because drivers adjusted their driving. That's what traffic causes us to do. By spending millions to increase capacity MODOT told drivers, "don't worry, drive whenever you want, we'll make room for you."

One thing MODOT did do right at the far western end of this project is build roundabouts both north and south of I-64 just west of Spoede Road to handle traffic from access roads running parallel to the Interstate. Instead of direction all traffic onto Spoede, eastbound traffic on the access roads can now enter I-64 in either direction without ever driving on Spoede.

The Lindbergh Boulevard exit is a new single-point interchange identical to the ones employed along I-64 at Hampton Avenue and Kingshighway farther east in the City. Sometimes described as an "urban interchange", the new configuration does double-duty, utilizing less land area and proving irony is alive and well. Perhaps it would have been nice to have an enhanced interchange at Warson and Clayton Roads, but there was little chance of that given the cost of land and presence of private homes in the vicinity.

Speaking of which, I suppose it's necessary to address the absence of a MetroLink line as part of this project. Below is an image of the Clayton/Warson interchange and east towards McKnight. As you can see, this is one of the least dense areas of the St. Louis metro area. Who amongst the residents living within this image is going to ride MetroLink? Mass transit requires density. It's not "needed" or "preferred", it's required. Irrespective of mistakes made with the cross-county extension, Metro and others were smart to not place a line here. 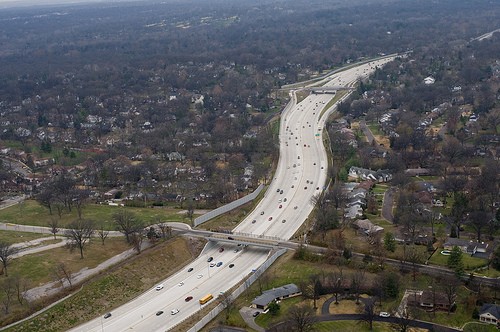 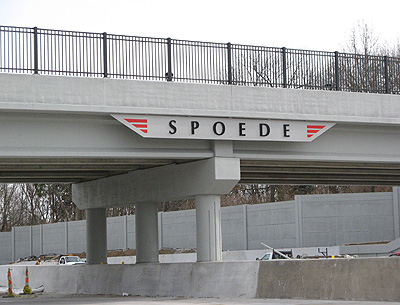 Lastly, regarding the western portion of the "New I-64", aesthetically the project must be considered a failure. Of course in some ways my expectations have been surpassed, but that is only because they were incredibly low to begin with. The marquee road names on the overpasses are nice and large, but look cheap. The vertical lines in the columns and sound walls look cheap as well while the overpass lighting and fencing are improvements while being overwhelmingly bland and placeless. This is no complaint against those who designed them, but more a regret that we do not value the appearance of our public works.

More than any other aspect of the project, the newly installed sound walls make the highway feel different. Gone is the green trees and neighborhoods one used to enjoy that made I-64 a unique and slightly more enjoyable Interstate than others. Residents wanted them and they are now standard procedure so they are not a surprise.

I'll take a look next at the I-170 interchange and surrounding area, including Hanley Road next and then consider the changes wrought by the project east to Kingshighway, as well as what's next. More interchange work looms on the not-to-distant horizon.