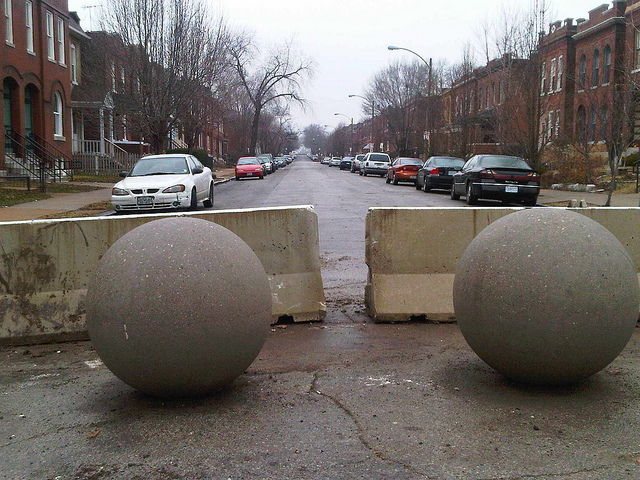 Hundreds of streets in the City of St. Louis which were once part of an integrated street grid now end at inglorious sewer planters. Savvy urbanists often refer to them as Schoemehl pots as many were installed while Vince served as Mayor for much of the 1980's. And while everyone agrees the pots are ugly, that were the consensus ends.

I want the pots removed. I want to live on a city street and not a cul-de-sac. So why did I move to a street with barricades? Well, we chose to buy our home based on location, size and price, and particularly on proximity to the BJC/WU medical center. To be honest, the barricades were a major negative when we considered our home (as were the lack of street trees, but that's another post). But the barricades looked temporary. Even if politically they would be tough to remove, physically they just sat on the street and could simply be picked up.

A few inconclusive studies are available (one of the latest coming from the U.S. Department of Justice), and all share particular faults: street closures are often accompanied by police and community efforts to reduce crime, increased awareness and vigilance. Residents and decision makers are also invested in the decision and want to believe that their street is safe, that their effort has been a success. Any reduction in crime, whether anecdotally or temporary, is lauded as a success. The barricades have a way of putting down roots and making themselves at home.

Those who would like the barricades to remain generally cite crime prevention and traffic control as positive outcomes of street closures. Clearly crime was a significant concern on my street when the barricades were installed. Traffic, per se, was not a problem, but the barricades have reduced traffic. The problem of co-contributing factors in reducing crime was explained above and much has changed in my neighborhood since the streets have been closed.

Tens of millions of dollars have been invested, the neighborhood is being gentrified. Crime rates across the board are going down. We may never to what degree the barricades effected this change, but we do know they were just one factor, and the most passive at that.

So why is the St. Louis Fire Chief in the headline of this post? Fox2 has reported that Chief Dennis Jenkerson supports the removal of the barricades city-wide. Recently the mother of a shooting victim watched rescuers "dodging the four giant flower pots that cut off access to her home." While no one suggests that the barricades delayed help in this case, or contributed to the death of the victim, the story has provided a platform to highlight opposition to the street closures.

Jenkerson told Fox2 that the Mayor's office has asked from his input on the barricades. "This has been an ongoing concern of the fire department's. We don't like them. They severely impede what we do," Jenkerson said. But the fire department isn't consulted when barricades are installed and it takes just a few residents to request a street closure to actually close a street. Why does this make sense? Why should it be more difficult to have our streets open than closed?

The Fox2 story states that it's up to each individual street to lobby its alderperson to have the barricades removed if desired. To the guarantees of death and taxes you can add the absurdity of St. Louis City governance. For a city that cannot enact a uniform historic preservation code, synchronize stop lights or manage its own police force, it is probably too much to ask for a policy regarding these "temporary" street closures. But let me suggest one solution: street closures should be required to be re-enabled by majority vote by street every five years.

The temporary permanence of the barricades represents the opaqueness of city government bureaucracy and civic engagement. It is time to consider alternatives. The existing barricades in Forest Park Southeast may be removed soon, only to be replaced by marginally more attractive barricades. Of course we call them bollards today. This isn't the worst alternative as the new barricades will be "temporary" as well and can simply be removed in the future. 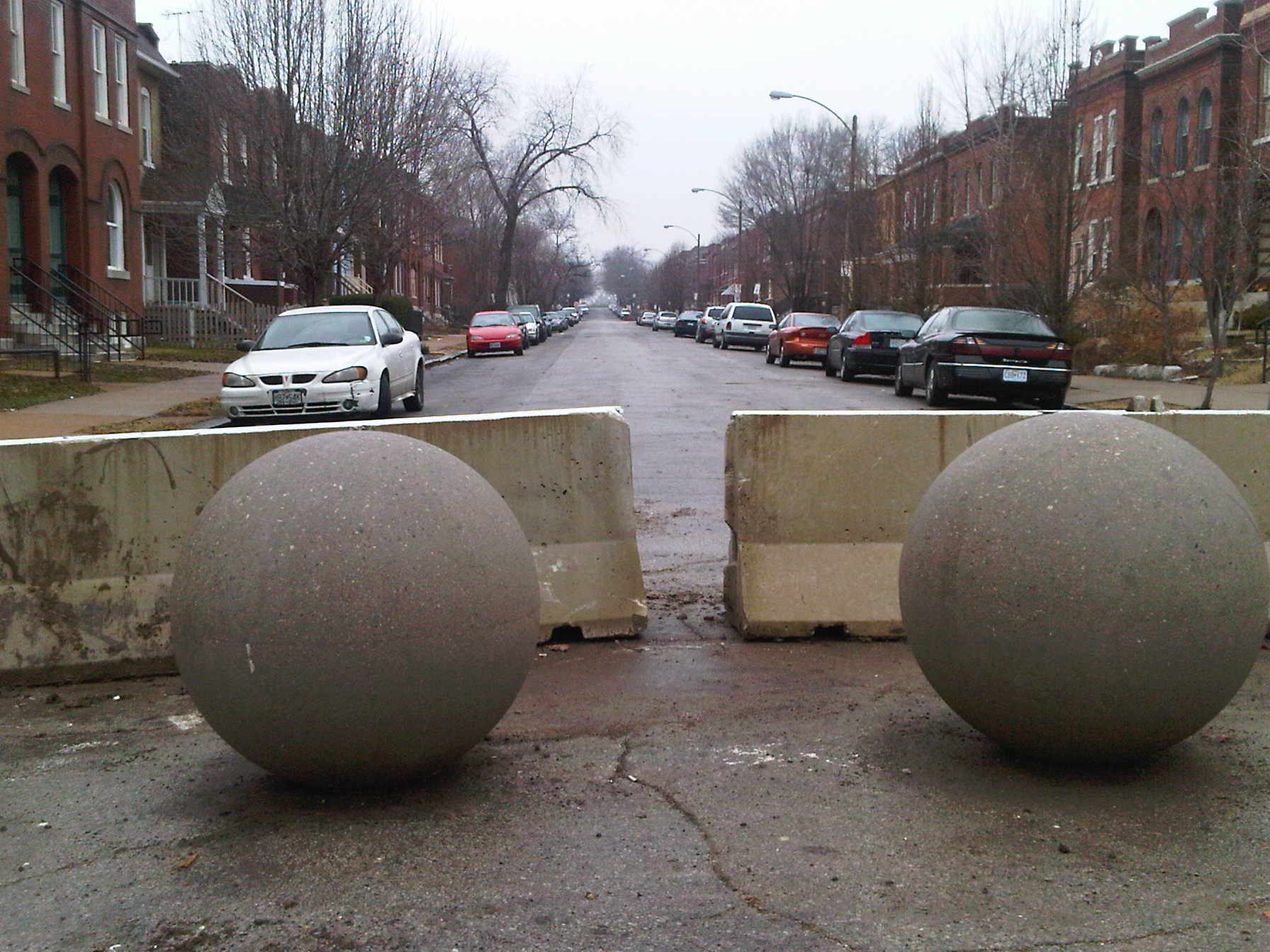