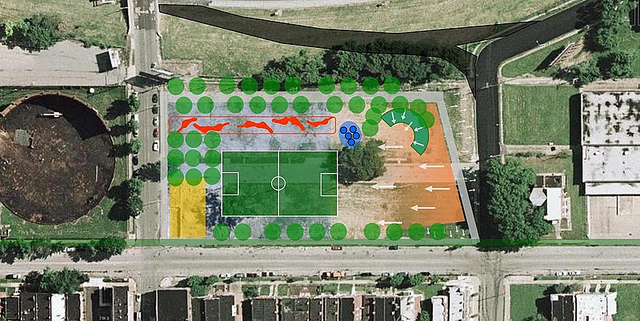 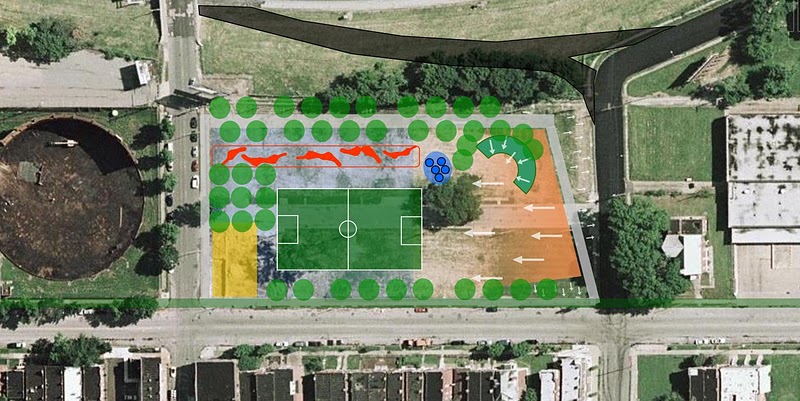 Currently referred to as "Chouteau Park," the Grove's new neighborhood park is nearing a final public presentation. Over the course of the past two years stakeholders in the Forest Park Southeast neighborhood have brainstormed, tweaked, made suggestions, offered constructive criticism and expressed concerns about the new park that is the result of the Barnes-Jewish Hospital deal to change the lease terms of Hudlin Park.

The new park is almost exactly the same size at downtown's $40M City Garden. I won't spend any time elaborating on why the similarities end there, other than to say that Chouteau Park currently has about 1/40th of the funding of City Garden. This means that the park will be developed in phases and that cost is a consideration at each step. The public presentation will take place in November, but following is some of what you can expect.

The drawing above is entirely my own and any faults with it are mine, although it does represent the concepts that seem to have garnered the most support by those attending the Chouteau Park committee and public meetings. The information below is meant to reflect my opinion and should not be considered to represent the perspective of others.

Grading – The park will slope from east to west with the high point of the park being immediately next to Newstead Avenue. This will add some variety and movement to the park, screen what will become a busier street with the imminent construction of the Newstead Avenue interchange, and provide a grassy slope for people to enjoy. Roughly 2/3rds of the park will be flat. The grading largely follows the currently land slope and will be the relatively inexpensive option.

Recreation Field – There will be a youth-size soccer field near the center of the park. Obviously this field could be used for any number of sports activities. The field could also host a stage or movie screen for a variety of community events.

Playground – A unique playground of undulating form will be north of the playing field. The way to think of this is earthen mounds of varied shapes, perhaps up to six feet high, stretched along 100 feet or so. The mounds would be covered in a rubberized material similar to what is on the ground at the playground next to the Forest Park Visitor's Center.

Water feature – It's not clear where this will go or how it may connect with the playground, but there will be a plan for water somewhere. On the drawing this is represented by the blue dots and it shown as a stand alone feature.

Walking track – A 1/4-mile walkway will encircle the park. To the west will be a traditional sidewalk. To the south will be the Chouteau Greenway (not to disparage the idea, but it's a fancy sidewalk). To the north and east will be a crushed gravel walkway. It will be wide enough to allow for security and maintenance vehicle access.

Restuarant/Cafe – Some love the idea, some don't. For now it will remain a future possibility. It's an interesting concept (imagine if Benton Park Cafe were IN the Benton Park). Surrounding development may absorb any retail demand and negate the option. Some structure will likely be built to provide storage and possibly bathroom facilities.

Amphitheater – Some formal seating may occupy part of the northeast corner of the park. Something is needed there to not create a dead corner of the park and while the playground, hill and open field are nice and usable, the park needs a "cozy" place to sit and read or just relax. This would also provide a small presentation area for a school class, for example. A quarter or half circle amphitheater would do the trick. Seating could be limestone benches built into the sloping hill.

Other ideas – Personally, I LOVE the idea of moving a couple of the wood-frame shotgun homes in Forest Park Southeast to the park to us as shelters for picnics and gatherings. The shelters in Forest Park couldn't be more bland (though they are perfectly functional). Tower Grove's gazebo's are incredibly unique. I think these shelters could really identify this park as unlike any other. Here's an example of a home that could be used: 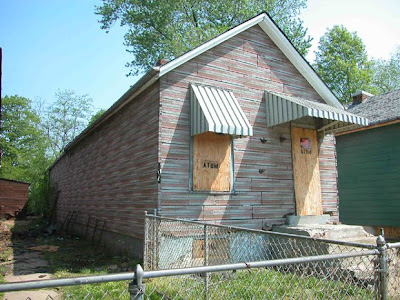 Shotgun homes such as this one once occupied much of what will become Chouteau Park. Bringing back two or three to serve as park shelters would create a unique setting and tie the park to the neighborhood in a meaningful way. Walls would be stripped, leaving an open, covered pavilion.

What we can expect next? There is enough funding for grading the park, planting trees, forming the undulating playground and constructing the 1/4-mile walking surface. The real question is what to focus on as more funding becomes available. Is the rubberized surface for the playground first? Amphitheater seating? A water feature? This question will likely be the focus of the public meeting.