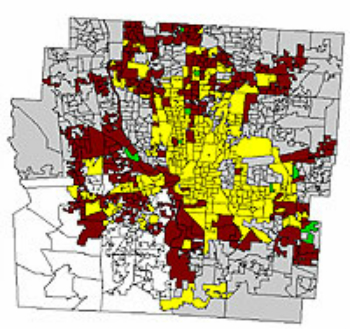 {RIGHT: yellow=for the tax increase, red=against the tax increase, green=tie vote (map courtesy of The Columbus Dispatch)}
Voters in Columbus, OH decided Tuesday that paying more in income tax is well worth the services the money provides. The personal income tax will increase to 2.5% from 2.0% beginning in October. The tax was last increased in 1982. It is estimated that the tax increase will produce close to $100M to be places in the city’s general fund. Columbus uses this fund to pay firefighters and police, gather trash and maintain parks. The increase will cost taxpayers $50 per $10,000 earned.I don’t imagine that St. Louis County and metro area voters are going to approve a 2.5% income tax, but why do we struggle to pass a 0.5% sales tax aimed at expanding mass transit? Unfortunately the people of the “Show Me” state aren’t saying “show me what healthy and growing cities are doing elsewhere to be successful.”