According to the St. Louis Business Journal Restoration St. Louis has received $2.5M in tax credits towards their $14M “Green Grove” project along Manchester Avenue in Forest Park Southeast.

The make up of the projects isn’t made entirely clear by the reporting. It’s stated that the credits are meant to assist in the building “or” renovating of “up to nine” LEED buildings, though the same blurb later reports that the “Green Grove” project will consist of “new mixed-use buildings and renovated existing buildings”.

Renovation is nothing new to the Gills as they have completed dozens of buildings in the Forest Park Southeast neighborhood. However, it would be very significant to have new construction on Manchester Avenue.

There are a number of vacant lots along Manchester between Kingshighway and Vandeventer owned by Restoration St. Louis, but the largest is located at the southwest corner of Manchester and Newstead. Of course the largest parcel that looks to be redeveloped is the large and especially prominent Commerce Bank site at the far east end of The Grove. 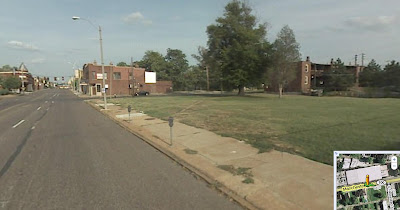 {no confirmation that infill is coming here, but it is the largest vacant parcel owned by Restoration St. Louis}

The Business Journal reports that the “Green Grove” project “will have 37 residential units and 11 commercial units totaling 67,620 square feet of space.” That’s no small project considering that many of the existing historic commercial spaces on Manchester are 2,000 square feet or less.

With a couple million dollars set to be spent this coming year on a new, more pedestrian friendly streetscape and several businesses set to relocate to The Grove (not to mention renovate some of the most dilapidated, less-historic and just plain unattractive buildings on Manchester), this commercial strip looks set for a big evolutionary jump.