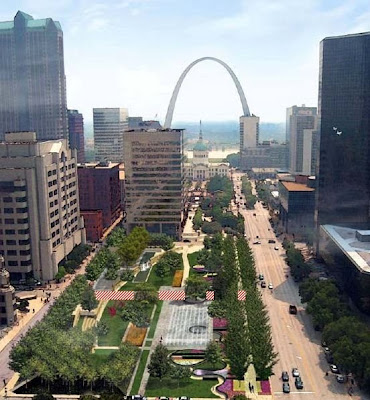 St. Louis’ City Garden has met with so much immediate success that 9th Street remains closed and is likely to remain so until the crowds are smaller. This according to Tricia Roland-Hamilton, director of the Gateway Mall project as and first reported by the excellent Building Blocks blog at the Post-Dispatch.

I can’t say that I predicted that this would happen, mostly because I had no idea that St. Louis would ever accommodate people at the expense of cars. Of course Euclid Avenue north of Lindell in the city’s Central West End is often closed for everything from Harry Potter book release parties to the annual very colorful Halloween bash and other places such as Maplewood and Clayton temporarily close streets as well.

It seems that a lot of people are willing to forego a couple days of driving on a particular street, especially if on a weekend. But any more than that and all St. Louisians know what happens: utter chaos. Remember the endless gridlock when 40/I-64 closed? The people stranded and forced to bath in the Brentwood Promenade fountain? No you don’t. It didn’t happen.

Then again, there is a certain chaos surrounding City Garden, all the splashing, screaming and people everywhere! So let’s just close 9th street between Market and Chestnut. The crowds may not always be as dense as they have been so far this July, but we finally have a place especially for people. Let’s make it special for people.