Cortex has been in development for a number of years now and the Center for Emerging Technologies (CET) is a relative long-time resident of the eastern Central West End, but new development may finally create the needed density for a new Sarah Street Metrolink Station. This would be a fantastic development for this part of the city as the stop would be within 2 blocks of the new West End Lofts and the CET to the north and 2 blocks from the new St. Louis Language Immersion School on Papin to the south. It would also be just three blocks from Manchester Avenue and the east end of The Grove district.

But what appears to be driving the possibility of a new Metrolink stop now more than ever is significant as-yet-to-be-announced developments within Cortex and on Sarah Street north. The Northeast corner of Laclede Avenue and Sarah Street will likely see some action soon and the wheels are churning on new projects to the south of Forest Park Parkway as well. While Euclid Avenue may be the traditional heart of the Central West End, keep an eye on the east end as this may be where we see more innovative and creative development.

Preservationists and urbanists seem to perpetually be a step behind as development occurs and this is likely the case here as well, but I will put forth two wishes for development next to the Metrolink: at all costs save the U.S. Metals and Supply Co. office building facing Sarah Street and second, incorporate the existing station building into the new Metrolink stop.

The U.S. Steel office building is one of the few notable buildings within the Cortex district of warehouses and industrial land. Its preservation would preserve a sense of place in this rapidly changing area. With additional residents and workers this building could serve as a perfect coffee stop or after work watering hole. Of course U.S. Steel is still using it and caring for it well so they should stay as long as they want. 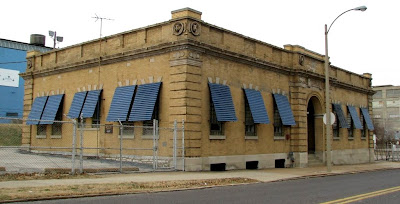 {the U.S. Steel and Supply office building on Sarah Street}

{detail of carvings on U.S. Steel and Supply office building}

The existing station building adjacent to the Metrolink tracks at Sarah isn’t remarkable, but it is an excellent visual landmark and like the U.S. Steel building, offers a sense of place on a human scale. The structure is sound and has a number of possible uses. 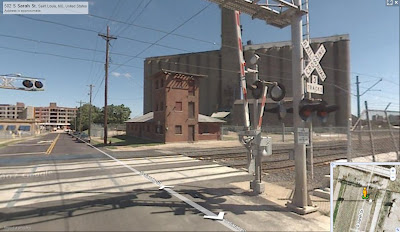 {a view of the existing station building, West End Lofts and grain elevator in background}