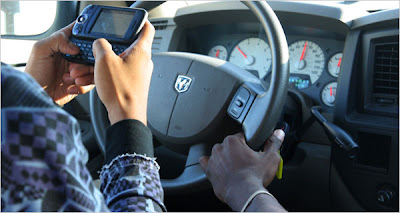 {teenagers texting on a Missouri highway (photo from NY Times)}

Earlier this year when Missouri chose to ban texting for drivers 21 and younger I wrote a post expressing how ridiculous this measure was. It’s a clear example of legislators making laws exclusively for others. Although laws and regulations differ widely from state to state the tide keeps moving the way of banning cell phone use entirely while driving, for everyone.

The article reports that this past year state legislators introduced more than 150 separate bills concerned with distractions while driving. Not surprisingly, just 10 became law. Why? For the same reason Missouri’s new law applies only to drivers 21 and younger:
“I’m on the phone from when I leave the Capitol to when I get home, and that’s a two-hour drive,” said Tad Jones, the majority floor leader in the Oklahoma House, who helped block legislation. “A lot of people who travel are used to using the phone.”

It may go without saying that a 40-year-old driver posses no special skill that would allow them to text and drive without any affect. Today’s New York Times leads with Driven to Distraction, an in-depth piece about the dangers of cell phone use while driving. In the article we learn that at any given time 10 percent of drivers are using their cell phone. In a recent survey 81 percent of drivers admitted to using their cell phone while driving while 98 percent of those same drivers consider themselves safe drivers.

I can’t help but add that texting and riding mass transit work quite well together.