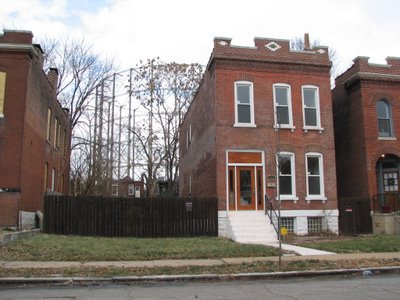 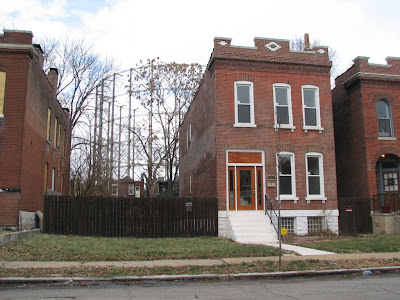 Empty homes in our urban landscape aren’t new and sadly are not uncommon. But this home represents something slightly more unique and sad: the failed historic rehab. The home was gutted in 2005-2006. It was then put on the market for $220K, then lowered to $200K. It has 3 bedrooms, 1.5 baths and everything is new, plumbing and electrical systems, walls, floors, windows. The home comes with the neighboring lot as well. So what’s not to like? Well, a quick look at the photo below gives a general idea: the painted foundation, odd front door treatment, poor choice of windows are all negatives. Actually the front door is much better than the first effort when the owners put white vinyl siding above the door. Unfortunately the inside is much worse. It appears that the rehabbers took full advantage of that extra 10% off you receive when opening a Home Depot credit card account. Everything is as cheap and bland as you can imagine.

So the home continues to sit. Having gone through foreclosure in the fall of 2008, the home is now owned by the Great Northern Trading Co., LLC of Orlean, Virginia. The foreclosure “sale price” is listed as $247,234. In 2005 the home was owned by Marquitta Williams and is said by block residents to have been the last drug house on the block. So while residents do not enjoy the vacant home it is preferable to a drug house. Dalkov LLC purchased the home and presumably did the rehab. The owners have not paid property taxes on the building and no utilities have been connected for some time. Sooner or later the building will be sold, but the gut rehab will likely need a second gut rehab to get it right. It’s been an expensive mistake for the developer, the bank and the block. Lose-lose-lose.

In the meantime, bad rehabs continue to happen: 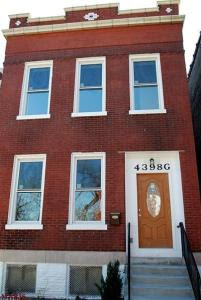